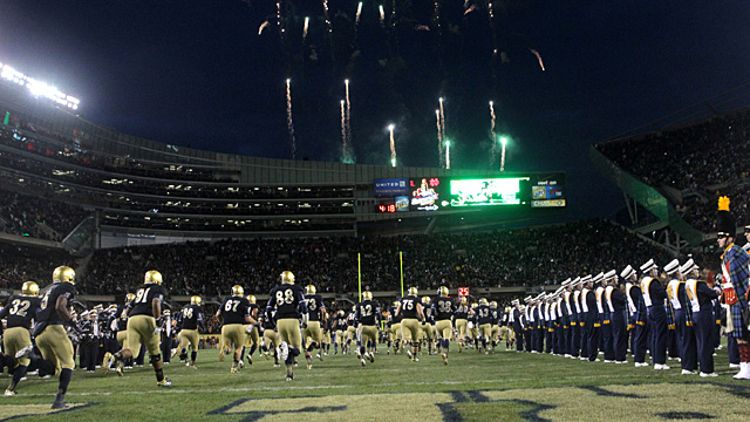 When is it safe to start talking about undefeated teams? When does a team’s record stop being a fluke and start being something to monitor obsessively? For me, the answer is Week 8. Which means it’s time for a new leadoff feature:

Let’s do a quick rundown and see which teams are at the greatest risk of seeing a crooked number in their loss column next week. To keep things tidy, we’ll stick to undefeated squads that are currently in the AP or BCS Top 25. (Rankings are BCS unless otherwise noted.)

Team: No. 1 Alabama (6-0)
Loss Risk: 2 percent
Details: At Tennessee. I’d call this game a “walkover,” but then Nick Saban might show up at my house and bite me.

Team: Ohio State (7-0)
Loss Risk: 8 percent
Details: Could the Buckeyes lose at home to Purdue? Absolutely. The Boilermakers gave Notre Dame a scare earlier in the year at South Bend, and even though they’ve looked like crap against Wisconsin and Michigan the past two weeks, we shouldn’t ignore the fact that OHIO STATE GAVE UP 49 POINTS TO INDIANA. Still, the reason I say 8 percent is that I’m now convinced Urban Meyer is the devil-genius of our era. His immediate resurrection of the program is the story of the season. I’m not betting against him the rest of the season. And if he manages to win out, like I expect he will, it almost becomes the funniest story of the year when Ohio State fans get to claim that their team would be champions if they only had a shot. It’s an ideal situation; you win every game, and you get to claim superiority without ever having to face the Alabama slaughter. Must be nice.

Team: No. 12 Mississippi State (6-0)
Loss Risk: 10 percent
Details: Hosting the Middle Tennessee State Blue Raiders, who seem to only beat weird Florida schools and Georgia Tech. MSU travels to Alabama next weekend, so their perfect season’s execution date is set in stone, but they should be able to maintain the fantasy (of a governor’s pardon?) for another week. Side note: Why did Middle Tennessee choose “middle” instead of “central”? Central just feels classier.

Team: No. 8 Oregon State (5-0)
Loss Risk: 15 percent
Details: Utah, a team that has failed to score or defend in three straight Pac-12 losses, is coming to town. An earlier win against BYU showed some signs of life, but OSU’s backup QB, Cory Vaz, looked excellent last weekend and showed that Tyler Mannion’s injury isn’t the end for the Beavers.

Team: No. 15 Rutgers
Loss Risk: 20 percent
Details: Visiting Temple, a team coming off Big East wins over South Florida and UConn. This is a battle for first place in the conference. However, Temple’s offense is highly suspect. Even on the road, it’s hard to imagine Rutgers conceding more than 15 or so points to the Owls. Also, this game is at noon — terrible owl time.

Team: No. 5 Notre Dame
Loss Risk: 22 percent
Details: BYU is a strange club. The Cougars’ strong suit is defense, having held teams like Boise State and Mike Leach’s Washington State to single digits. But they’ve had trouble scoring against the better teams on the schedule, and last week they got torched by Oregon State for 42 points. I’d give them a fighting chance for an upset at home, but in South Bend I wouldn’t be at all surprised if they didn’t sniff the end zone once. Or score a touchdown.

Team: No. 16 Louisville (6-0)
Loss Risk: 25 percent
Details: Hosting South Florida, a 2-4 team that nevertheless has looked OK in losses to Florida State and Rutgers. If the game were at USF, I’d feel good making an upset pick, since the Cardinals have allowed a lot of points to some very so-so teams and engineered a few escapes along the way. But at home? They should be safe.

Team: No. 3 Oregon (6-0)
Loss Risk: 30 percent
Details: Super-dangerous game at Arizona State (5-1) for the Ducks (and a really fun Thursday-night appetizer). ASU has looked great the last three weeks while blowing out Utah, handling Cal on the road, and decimating Colorado. Granted, not exactly the Pac-12 elite, but first-year coach Todd Graham has the offense clicking, and it’s possible they can score against Oregon. Can they hold them? Definitely not. But with a little luck and a touch of home-field advantage, a stunner isn’t out of the question. This is only Oregon’s second away game, and by far their biggest challenge of the year.

Team: No. 4 Kansas State (6-0)
Loss Risk: 40 percent
Details: The Kleinapple Express travels to no. 13 West Virginia this week, and everyone is asking the same question: What the hell do we make of WVU’s 49-14 loss to Texas Tech last week? Was it a fluke? Was it the long-awaited exposing of a terrible defense? Did it provide a blueprint for shutting down Geno Smith and coach Dana Holgorsen’s spread offense? My answers, in order: kinda, yes, and no. There’s no way West Virginia will be held to 14 points at home, but then again, Bill Snyder’s crew went into Oklahoma and got a win. I like KSU here, but I think they’ll have to out-gun the Mountaineers.

Team: No. 21 Cincinnati (6-0)
Loss Risk: 40 percent
Details: The Bearcats travel to Toledo, a 6-1 MAC team whose only loss came in overtime at Arizona. They’ve scored more than 50 points the last two weeks, and will give the strong Cincy defense its stiffest challenge yet. Still, I give Cincinnati the edge because, unlike the Rockets, they can score and defend.

Team: No. 2 Florida (6-0)
Loss Risk: 48 percent
Details: The Gators find themselves in the game of the week, hosting no. 7 South Carolina. Since neither team has to play Alabama in the regular season, the winner of this game will probably make the SEC title game. And then lose to Alabama.

To follow this schedule, you must be swift of remote and steady of computer.

Huge, huge, huge game for the Aggies. With just one loss to Florida on their record, they’re starting to look better and better all the time, especially after avoiding their standard fourth-quarter collapse in games at Ole Miss and Louisiana Tech. This is a very winnable game at home against a team with a shaky offense, but they’ll need a bit of luck. LSU’s defense is still an elite unit, and A&M can’t allow many points (like they did in their previous road games) if they expect to come through. But a fast start would make it extremely hard for Les Miles and company to stage a road comeback, and a win could easily propel the Aggies to the top 10. Anyway, rooting against them here is probably a communist act.

Not great, but hey, the schedule gods gave us a sweet noon game above, so let’s not get greedy.

So good. I’m riding with Florida in this one, if only because I can’t imagine a greater likability contrast between Will Muschamp and Steve Shithead. Oops, I misspelled his last name. By a lot. I wonder how many journalists Spurrier has tried to get fired this week. Anyway, it’s got to be annoying and somewhat shameful when a former coach comes home and wins, so there’s a lot of emotion at stake for fans in the Swamp. I’m not the biggest proponent of SEC-style football, but this one should live up to the hype.

The greatest rivalry in college sports. (No, you’re being misleading!)

Kleinapple Express vs. Geno Smith is your classic thunder vs. lightning matchup. In nature, which one scares you more? I’m a thunder guy. It’s the sound of imminent disaster, signifying not just lighting, but wind, rain, floods, hurricanes. Lightning can do more damage, but it’s not likely to affect you directly. I’m not even sure what I’m talking about right now though, so let’s move on.

I have nothing against Tennessee, but for some reason it’s funny to me to watch them get crushed. Maybe it’s the comical orange uniforms. I don’t know. But I’ve got the popcorn ready, and I plan to throw handfuls joyously into the air whenever Bama gets a sack.

Unrepentant offenses, no defense, no shame.

Is there anything better than finishing the day with a high-flying Pac-12 game? I have to go to a wedding next Saturday (wife’s friends, not mine — UGH), and my only solace is that we’ll probably get home in time for me to catch the end of whatever late Pac-12 game is happening. It should be a great way to come down from the intense embarrassment of abusing the open bar and being stupid on the dance floor, which is my big plan at this point.

I was afraid I would have to retire this segment last week, but then Duke blew a 20-point lead against Virginia Tech and lost the game by a healthy margin. At some point in the second half, it occurred to me what was happening — the Blue Devils were teasing us all by winning five games early on, but now they would lose the rest of their games and miss a bowl game. Classic, classic Duke football. So the feature continues:

On October 18, 2007, Duke coaches officially abandoned their tactic of trying to lure recruits by dressing in crimson and referring to the school as “Bama.” The strategy was reinstated in 2009.

I just think this might be the year the committee starts thinking outside the box. Speaking of which …

This is the week where man crush becomes soul crush, which, as I re-read it, is a weird thing to say. Do I have enough energy to go back and change it, or am I so lazy that I’ll just say “screw it” and submit the post mid-senten