The Trenchies: The Giants’ O-Line, Chris Clemons’s Spin Moves, and the Best Line Play From Week 6 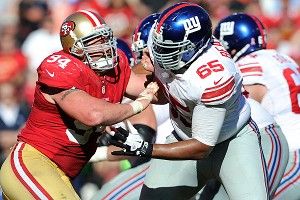 My only takeaway from the Kevin Gilbride–Jim Harbaugh media dust-up last week is that Kevin Gilbride is a manipulative genius. See, Kevin Gilbride’s been doin’ this for a while. In the old days, coaches didn’t take shots at each other through reporters. They just took shots at each other. So when Gilbride came out and said that Justin Smith is the league’s most notorious defensive holder, it was clearly with a purpose. That purpose seems to have been achieved. The Giants’ 149 rushing yards on Sunday were the most given up in the Harbaugh era, and they were largely a result of avoiding the byproduct of Smith’s mildly illegal skill.

Gilbride’s claim was that Smith, whom he also described as an excellent player, was adept at grabbing two offensive linemen at a time while the Niners performed various line stunts around the occupied blockers. This definitely happens, but it’s mostly of use in rushing the passer. One of the reasons (there are many) that San Francisco is so good at stopping the run is that Smith — along with fellow 3-4 linemen Isaac Sopoaga and Ray McDonald — is able to hold up an extra lineman at the line of scrimmage.

This can happen a couple different ways. One is by being one of the best defensive linemen in football. Blocking schemes at almost any level include a strategy called “combo blocking,” which involve two linemen momentarily double-teaming a defensive lineman before one moves to the second level to take on a linebacker. The entire process is halted if two offensive linemen are actually required to neutralize the defensive lineman. This allows the linebacker to flow freely behind the action, and it’s often what happens with the Niners. The other way, when a defensive lineman grabs each blocker and prevents each from coming off the block, is the one Gilbride took issue with. Neither happened very often on Sunday. 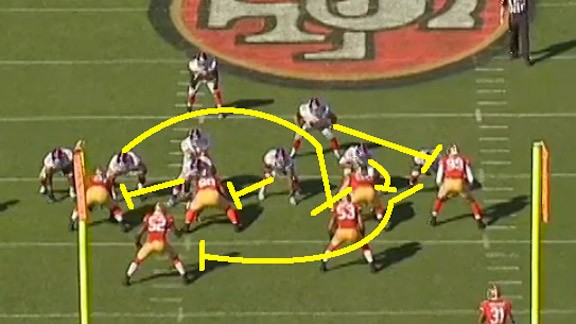 Early in the third quarter, the Giants lined up in an offset I formation with both the fullback and a tight end to the left. The call is a power play to that side, with the right guard Chris Snee pulling around to lead up on the play-side linebacker NaVorro Bowman. With the fullback kicking out the outside linebacker, the tight end and left tackle are freed up to execute a combo block from Smith to Willis on the backside. The Giants ran the same play in the first half, only then, the double team got such little push on Smith that Bowman was free to fill before Snee could get around the traffic. 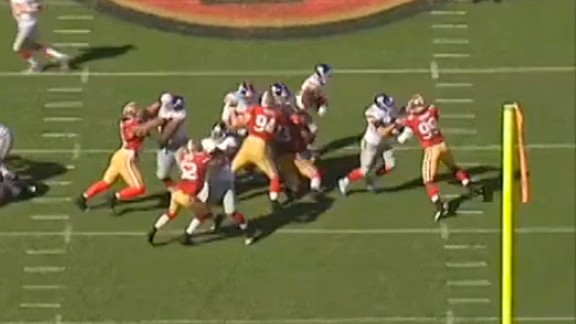 Here, they get just enough. Left tackle William Beatty uses the help from Martellus Bennett to overtake Smith, and Bennett is free to move to Willis (52). The kickout on Aldon Smith (99) provides just enough room for Snee to move through and get his hands on Bowman. The play doesn’t hit the gap it was intended for, but because both inside linebackers are accounted for, Bradshaw is able to bounce the play outside for a nice gain on first down. 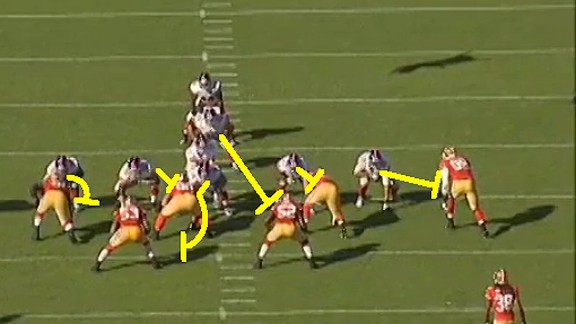 This one is even simpler — a lead play with the center and right guard executing a combo up to Bowman on the backside and the fullback leading up on Willis. Left guard Kevin Boothe has the toughest job here. He’s one-on-one with Justin Smith right at the point Ahmad Bradshaw is shooting for. 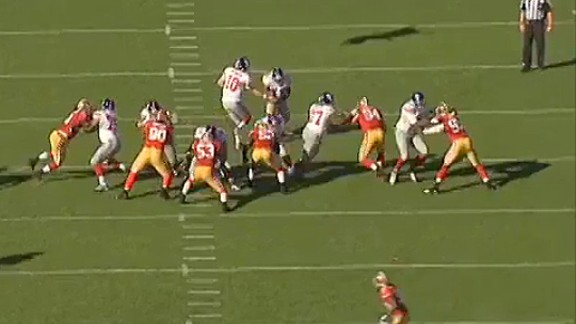 Boothe does a great job of letting Smith go where he wants, and the rest of the assignments unfold from there. Center David Baas moves up to Bowman as Snee overtakes the nose tackle, and the fullback has a clear path to lead up on Willis.

The idea on both of these plays, and on any running play against the Niners, is that it’s crucial for linemen to get up to the second level to at least slow down the two guys San Francisco has inside. Often, the plan is a lot simpler than its execution. Sunday, the Giants managed, and I think they owe Jedi master Kevin Gilbride at least a little credit for making that happen.

The Bucs have thrown up a couple impressive run-stopping games so far this year, but holding Jamaal Charles and his 5.5 yards per carry to just 40 yards on 12 attempts is a different sort of feat. 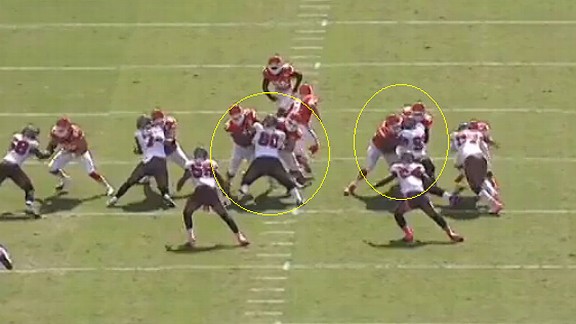 What teams usually struggle to do against San Francisco is what the Chiefs struggled to do against Tampa on Sunday. This is a second-and-1 early in the second quarter. Kansas City is lined up with two tight ends and Charles as the single back. The hope is that the center and right guard can combo up to one linebacker while the left guard and left tackle move up to the other. The only problem is that Roy Miller (90) and Gerald McCoy (93) aren’t too interested in letting that happen. 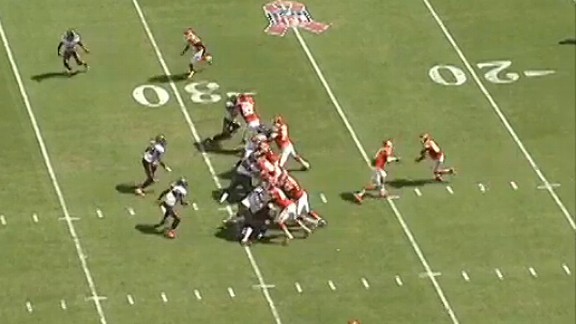 Both fire off, take on the double team, and give up no ground. This shot is a full second from the time the ball was snapped, and neither double team has managed to move McCoy or Miller from the line of scrimmage. The easiest way to execute a combo block is by taking the defensive lineman straight back into the linebacker. This way, no decisions have to be made. The linebacker gets caught in the wash, and the back is free to make any cut he chooses. Not only are the Chiefs not getting that sort of push, they’re getting none at all. Both linebackers are free to make a play, and the run goes for no gain. 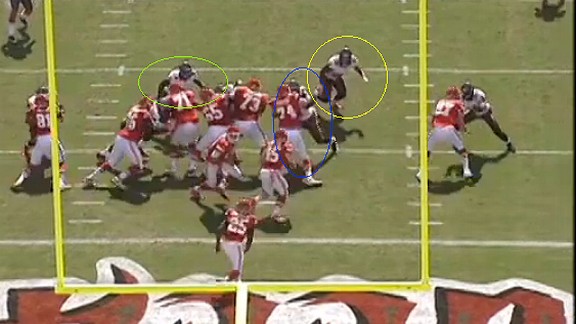 Considering not much else was working, the Chiefs decided that maybe a fullback might help. Spoiler alert: It did not. Isolating the linebacker for a lead blocker still doesn’t help alleviate the problem Kansas City had on the previous single-back run. The play-side linebacker (yellow) is accounted for by the fullback, but the backside linebacker (green) is free to scrape over the top because both down linemen are eating up double teams at the line of scrimmage and defensive end Michael Bennett has jammed right tackle Eric Winston back into the hole. 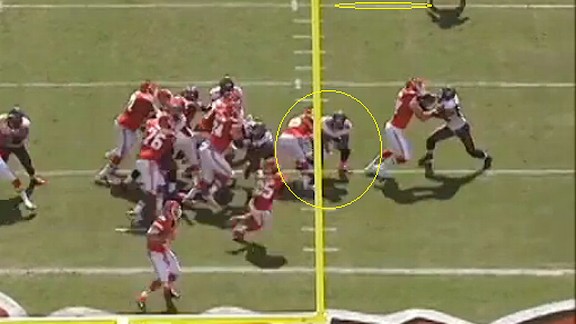 Tampa follows defeating the scheme with winning individual matchups. The perfect play is made by linebacker Mason Foster. Foster takes on the fullback with his inside shoulder, which allows him to keep his outside arm free and make the play. Bennett, who might be one of the more unheralded players in the league in both the run and pass games, gets in on the act as well. This sort of attention paid to defensive linemen is expected with San Francisco and other teams who’ve developed a reputation for run-stuffing, but it’s probably time the Bucs get some credit here as well.

Clemons and the rest of the Seahawks defense have been excellent all year, and the 30-year-old former Redskins and Raiders castoff continued that trend on Sunday. Clemons didn’t manage a sack against the Pats, but he had several impact plays, including Tom Brady’s second intentional-grounding penalty of the day. 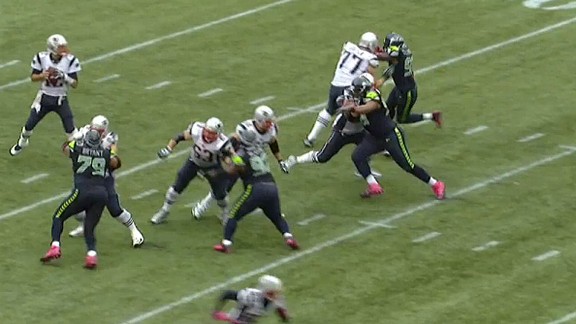 My favorite of those plays was merely an incompletion, but it’s a good example of the arsenal of moves Clemons has. Spin moves aren’t always very effective against experienced offensive linemen, and on first thought, that might be a bit surprising. One advantage that defensive ends have over their hulking offensive counterparts is speed, and using a quickness-based move on the outside would seem to give the defender an edge. The problem is that the success of a spin move has less to do with an offensive lineman’s feet than with his hands. The image above shows Clemons (top right) as he starts his spin move on left tackle Nate Solder. Before it even begins, Solder is already in trouble. With his left arm, Clemons is making contact with Solder before the 6-foot-8 tackle even has his hands up. 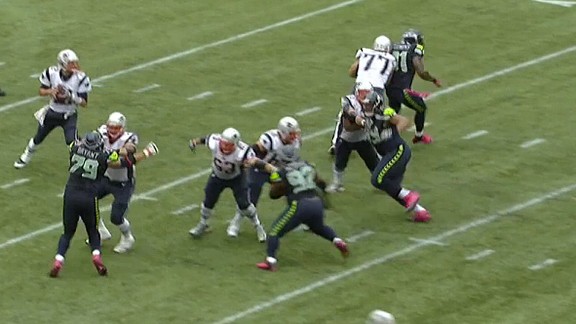 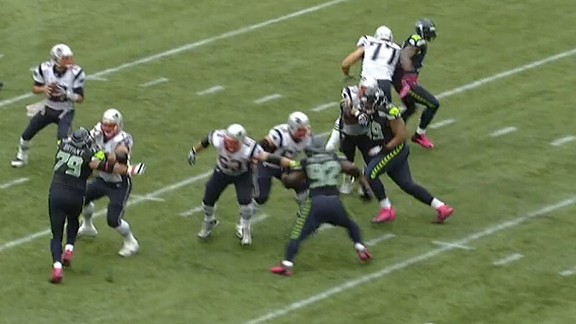 Clemons finishes the move by whipping his right elbow through and using it to completely turn the tackle’s shoulders. At this point, his path to the quarterback is free, and the next half-second is the longest Solder can imagine as he watches Clemons on his unimpeded route to Tom Brady.