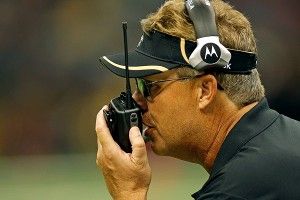 You know what’s crazy about the audio of Gregg Williams’s pregame speech that was released to the media today? Everything. It’s pretty crazy. You know what is funny about it, though? For all the “kill the head and the body will die,” Brando at the end of Apocalypse Now, and tribal nonsense Williams told the Saints before their playoff game with the San Francisco 49ers, some of the source material was actually rather delicate and feminine. The guy quoted Memoirs of a Geisha.

To convince Malcolm Jenkins to target Kyle Williams’s skull, to get his Saints players frothing at the mouth, ready for war, Gregg Williams did not quote General George S. Patton, Sun Tzu’s Art of War, lines from Shakespeare’s “St. Crispin’s Day” speech, or lyrics from Slayer’s Reign in Blood. Nope. Memoirs of a Geisha.

Personally, if we were pulling from that text, I would have gone with, “A tree may look as beautiful as ever, but when you notice insects infesting it, and the tips of the branches that are brown from disease even the trunk seems to lose some of its magnificence.” But hey, I’m particular when it comes to my motivational speaking.

You can listen to the audio below. NSFW, obviously. Unless your job is playing linebacker, I guess.

How to Restore the Legend of Opening Day