A Brief Conversation About How the Falcons Can Top Bountygate 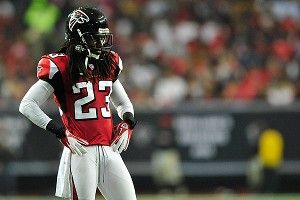 Chris: OK, Rem, you are an Atlanta Falcons fan.

Rembert: That I am.

Chris: I am a Philadelphia Eagles fan, so I am familiar with emotional pain. What were your immediate feelings regarding Bountygate?

Chris: Yeah, I feel like the NFC South has been handed to the Falcons on a plate, and now I’m waiting for them to do a hilarious pratfall down the stairs while holding said plate. Let’s investigate the ways in which Atlanta could screw this up. Obviously, any old team could just whither in the face of opportunity, but these are the Dirty Birds we’re talking about. This is the team that gave us Ron Mexico. Why don’t we run through some possible scenarios?


Rembert: 1. Matt Ryan learns about the Saints’ troubles, feels even greater expectations to win, panics, and joins the front office of Home Depot.

Rembert: That could easily happen.

Chris: Placekicking and “The Art of Eight Limbs” have a lot in common.

Rembert: Especially if he refers to the business venture as a partnership between the Southeast Muay Thai Boxing Association and Bad Newz Kennels.

Chris: An opportunity to grow both businesses.

Chris: Also, I really feel like this is an opportunity for Dunta Robinson to truly shine, and by “shine” I mean get in a tremendous amount of trouble. Like, I definitely think we’re going to hear about Dunta Robinson trying to start a new viral trend in which he shows up at kids’ birthday parties and lays out the birthday boy or girl with a full-speed hit to the small of the back. “It’s like flash mobs, except I tackle children.”

Rembert: So you think Dunta will have a Waka-like presence on the team?

Chris: I think Dunta will have an Ol’ Dirty Bastard presence. Let’s hash some more of these out. How about: Mike Smith gets an ice cream tattoo on his face?

Rembert: I’m not sure if he’ll take it that far, but he’ll definitely sign to Brick Squad 1017, UNLESS New Orleans’s own Birdman signs him to Young Money like he’s seemingly doing with anyone these days. He signed Fred Durst. Why not pick up Mike Smith?

Chris: MIKE SMITH YMCMB VOTE OBAMA. I think we can conclude that if Mike Smith gets a face tat and/or signs with Brick Squad 1017 or Young Money Cash Money and releases a recording of himself doing dramatic renditions of Barack Obama speeches, the Falcons losing the division will actually be worth it.

Rembert: Here’s the thing, Chris. If we lose the division, it won’t be over a missed call or some weird technicality. It’ll be some insane scandal probably involving a strip club and a preacher and two assistant coaches.

Chris: And a school superintendent and two members of Dungeon Family.

Rembert: And a UPS truck full of forged Hank Aaron 755 baseballs. And then, like clockwork, we’ll get the Olympics again in like 16 years.

Rembert: This is the Atlanta way. Why do you think we’ve never gotten Real World?