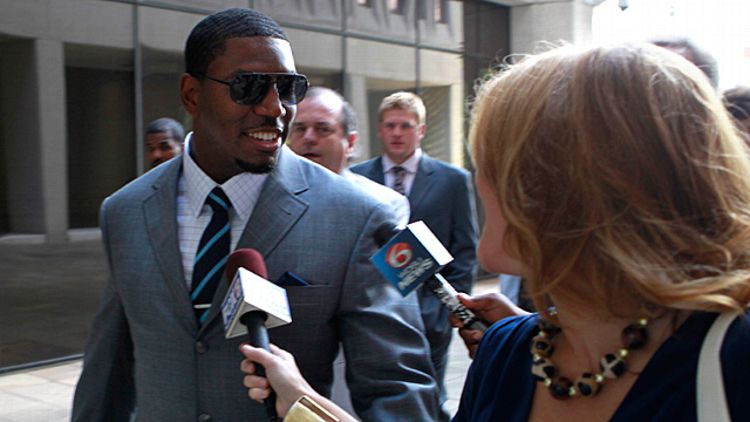 With the NFL preseason in full swing, the Bountygate scandal is just beginning to wind its way through the courts. Last Friday, lawyers for the NFL, NFLPA, and Jonathan Vilma appeared for the second time in front of Judge Berrigan in federal court in the Eastern District of Louisiana. Each side was looking for a knockout blow — Vilma and the NFLPA wanted an immediate ruling vacating the players’ suspensions (though Vilma would have been more than happy with a preliminary injunction to get him back into camp and on the field for the Saints), while the NFL wanted an immediate dismissal of all of the cases pending against the NFL and Commissioner Roger Goodell, including Vilma’s defamation suit.

This case was always a bit of a long shot for the players because review of commissioner discipline for “conduct detrimental” is only permissible in extremely limited circumstances. The players argued to the court that those circumstances existed here — Goodell was biased, he prejudged the outcome of the case, his punishment was arbitrary and capricious, he exceeded the scope of his authority under the terms of the collective bargaining agreement, and he failed to give the players due process. Jeffrey Kessler, outside counsel for the NFLPA, was at his fiery best, at turns channeling courtroom giant Brendan Sullivan (telling the judge: “You are not a potted plant, an innocent bystander helpless to right this wrong”) and Catskills giant Henny Youngman (remarking that one of the arbitration decisions in favor of the league “slice the salami so thin it became bologna”). The NFL essentially played defense, arguing that the players — and the judge — may disagree with the commissioner’s decision, but federal law and the terms of the collective bargaining agreement simply do not permit a judge to undo or interfere with the commissioner’s decision to punish players for conduct detrimental to the league.

The hearing brought good news and bad news for the players. Let’s start with the good news: Judge Berrigan made it fairly clear that she thought the NFL was in the wrong and began the hearing by saying that she’d “like to rule in Vilma’s favor.” Although she issued no formal ruling, Judge Berrigan repeatedly stated that she believed that the commissioner overstepped his bounds in disciplining the Bounty 4, that the league did not give the players a fair process, that Vilma’s punishment was unnecessarily harsh, and that Vilma was suffering irreparable harm because of it. The judge also strongly suggested — but made no formal ruling — that the bounty scheme was a pay-for-performance issue covered by Article 14 of the CBA.

A formal ruling that this was in fact an Article 14 issue would be significant because the system arbitrator, and not the commissioner, has exclusive jurisdiction over issues covered under Article 14 (additionally, suspensions are not permitted for violations of Article 14). In other words, if this is a pay-for-performance/Article 14 issue and not a “conduct detrimental” issue, Goodell would have no authority to punish the players and their suspension would be vacated (perhaps pending another arbitration heard by someone other than Goodell). The system arbitrator, Professor Stephen Burbank, rejected this very argument by the NFLPA on June 4. A three-member arbitration panel will hear an appeal of that ruling on August 30.

Here’s the bad news: Judge Berrigan did not grant an injunction for Vilma, she did not vacate the suspensions, and she expressed some doubt as to whether she had the authority to do either. Instead, she urged the parties to settle the case and suggested that she would not rule (and perhaps could not rule) until the three-member panel heard the appeal of Professor Burbank’s ruling on August 30.

(By the way, let’s settle down with the notion that Judge Berrigan is leaning toward Vilma because she’s a Saints fan. Home field advantage only gets you so far in federal court. And, I’ll let someone else accuse a federal judge of being biased. Even if Judge Berrigan is a Saints fan, she’s probably a bigger fan of not being reversed on appeal.)

So here’s the question that many Saints fans are likely asking: If the judge so clearly wants to rule for Vilma and the other players, why wait? There are at least a few explanations. It may be that Judge Berrigan is truly struggling with the jurisdictional issues and may not yet have decided if she has the ability to either vacate the suspensions or remand them to a new, neutral arbitrator.

Or it may be that the judge is convinced that this is in fact an Article 14 issue and thus outside the scope of the commissioner’s authority, but believes that she has no authority to act until the NFL’s collectively bargained internal grievance process plays out. That is, she may be waiting to see if the panel overturns Professor Burbank’s ruling on August 30 before inserting herself into the process.

Or, it may be that Judge Berrigan is hoping that the parties will settle and that she won’t have to issue a precedent-setting (or precedent-confirming) decision. That may be wishful thinking, as it’s hard to see a zone of possible agreement, at least between Vilma and the NFL. Given that Vilma wants to get back on the field and have his name cleared, will he accept anything less than no suspension (or a one- or two-game suspension) and a public apology? Given the NFL’s public statements about Vilma’s guilt, their desire to protect the broad commissioner powers they feel they bargained for in the CBA, and their fear of opening the floodgates to future player lawsuits, will they be willing to give anything less than the eight games they allegedly floated in earlier talks? Of course, if settlement talks do break down, it is possible Judge Berrigan might issue a quick decision prior to the August 30 hearing.

And what if Judge Berrigan does rule for the players? Well, it will obviously be a huge win for the NFLPA and will put a dent in the scope of the commissioner’s powers, but it won’t get them what the players truly sought (and what Chad Johnson will want if he feels the wrath of the commissioner for his alleged domestic violence) — real independent review of commissioner discipline for off-field misconduct.

Of course, any decision by Judge Berrigan will be appealed to the Fifth Circuit Court of Appeals and could drag on for months, if not longer. For the Bounty 4, they just hope they’re back on the field while the battle drags on.

The Huddle: Andrew Luck's Debut and Other News From Around the NFL