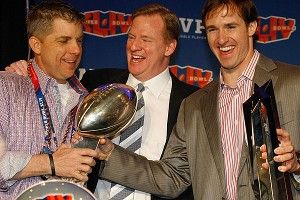 As expected, NFL Commissioner Roger Goodell denied the appeals of the Bounty Four, setting off a string of lawsuits that shifts the scene from the NFL offices to a federal courthouse in New Orleans. The lawsuits center on the scope of the commissioner’s authority and the rights of the players to challenge the exercise of that authority. The players agreed to a system where the commissioner is empowered to serve as detective, judge, jury, and executioner in matters impacting the integrity of the game. That is, if a player engages in “conduct detrimental” to the league, the commissioner has the power to investigate the wrongdoing, discipline the player, and then hear the player’s appeal. That system may seem unfair, but it is a system that the players agreed to in the new CBA and will have to live with for the next nine years.

So, the question raised by the Bounty suspensions is not whether it’s fair to give one person the power to determine the fate of players engaged in off-field misconduct, but whether that one person exercised his powers in a fair manner. Put another way, the question really becomes: What exactly did the players agree to when they vested the commissioner with broad powers? In challenging the suspensions, the players argue that, at a minimum, they were entitled to (but did not get):

Now we head to litigation, where all four players have filed suit in federal court in New Orleans asking a judge to overturn their suspensions. (Jonathan Vilma, represented by Peter Ginsberg, has asked the judge for a temporary restraining order and a preliminary injunction to block the suspension while the case winds its way through the courts. Vilma has also filed a separate defamation suit against Goodell. Scott Fujita, Anthony Hargrove, and Will Smith, represented by the NFLPA and their outside counsel, have not asked for injunctive relief).

Do the players have a chance? Well, there’s always a chance when you get in front of a judge or a jury, but this is an uphill battle for the players because it is extraordinarily difficult to get a court to overturn the decision of an arbitrator (in this case, the commissioner). It is not enough for the players to argue that they disagree with Goodell’s rulings. They must prove that his interpretation was “so palpably faulty that no judge could ever conceivably have made such a ruling.” It’s also not enough to argue that the severity of the punishment was unfair. Instead, the players must show that Goodell “effectively dispensed his own brand of industrial justice.” It will be a tough road for the players, but this is their only real shot at overturning or reducing their suspensions.

Here are the main issues in the cases from the perspective of the players and the commissioner.

The Commissioner’s Side: The players were punished for engaging in “conduct detrimental to the integrity of, or public confidence in, the game of professional football,” and the CBA gives the Commissioner exclusive authority over all such matters. In other words, this was about conduct that hurt the integrity of the league, not illegal hits on the field or violations of the salary cap off of it. And, independent arbitrators have already rejected the players’ jurisdictional arguments (an appeal of one of those decisions is still pending).

The Players’ Side: The commissioner should not have ruled on this case because he was impartial and biased, as evidenced by the public statements he made defending the bounty suspensions before the hearing took place. The players highlighted statements Goodell made before the appeal about the players’ guilt and claimed that “Goodell had determined to use the media as a megaphone to send a message … which had predetermined the guilt of the players and continued unabated even while the arbitration was being conducted.” The players thus contend that, as a matter of law, they have the right to a hearing before an impartial, unbiased arbitrator and that they did not agree to have the fate of player suspensions rest in the hands of a commissioner who has predetermined the outcome of the player appeals.

Due Process and a Fair Hearing

The Players’ Side: Their appeal hearing was fundamentally unfair and a sham because, among other things, 1) they did not have an opportunity to confront and cross-examine the NFL witnesses; 2) the identity of at least some of these witnesses has not been disclosed; 3) team employees and others with knowledge of the alleged bounty scheme were not compelled by the commissioner to attend the appeal hearing; and 4) the players did not have access to most of the NFL’s evidence and investigatory records, including exculpatory evidence (the players have claimed that the NFL only produced approximately 0.3 percent of the documents it allegedly reviewed and on which it based its disciplinary decisions). The players claim that these failures represent a “brazen and unequivocal violation of the disclosure protections that the NFLPA collectively bargained for in the CBA.”

The Commissioner’s Side: The CBA does not provide the players with any of those rights, and although the parties could have bargained for those rights, they chose not to. Rather, they bargained only for the limited rights contained in the CBA. For example, in denying the players’ appeal, the commissioner noted that in conduct detrimental cases, the CBA only gives players the right to see the exhibits upon which the league intends to rely on at the appeal hearing. In contrast, in “non-injury grievance” cases, the parties are required to exchange “copies of all documents, reports, and records relevant to the dispute.”

The commissioner has also noted that the players were free to present their own witnesses at the hearing, including coaches or other players (but chose not to), and that the commissioner simply has no power (and has never had such power) to compel witnesses to testify. He further noted that the league did not have any exculpatory evidence and suggested that any decision by the league to withhold such evidence would be irrational. After all, according to the commissioner, why wouldn’t the league want to disprove the existence of a bounty scheme that was harmful to its integrity?

The commissioner’s appeal decision also explained that maintaining the confidentiality and anonymity of some of the league sources during the investigation was necessary to protect the sources and to encourage potential whistle-blowers to come forward in the future, and added that no element of his findings were based solely on information from a confidential source.

The Players’ Side: The NFL failed to follow their own procedures by not producing their exhibits to the players in a timely manner. The CBA requires the exhibits to be produced “no later than three calendar days prior to the hearing.” The players claim that “three days” means 72 hours, and noted that the exhibits were turned over approximately 68 hours before the hearing. When the players raised this argument at the hearing, the league agreed to adjourn the hearing for several hours so that it took place more than 72 hours after the players had received the exhibits.

The Commissioner’s Side: That “three days” means three days, not 72 hours, and the players were in no way harmed by receiving the exhibits a few hours late (though, of course, they deny that they were late).

Involvement of the Coaches

The Players’ Side: The coaches should bear the blame for any alleged bounty scheme and the players’ suspensions should be overturned because the players were simply following the orders of their coaches (a.k.a., the “management-also-at-fault” or “Code Red” defense).

The Commissioner’s Side: No evidence was introduced to support the “Code Red” defense, and there was other evidence sufficient to warrant the suspensions (for example, Goodell noted that, even if Anthony Hargrove was following orders from Coach Joe Vitt, Hargrove lied to NFL investigators when asked about the bounty scheme).

Contradictory Statements Made by Coach Joe Vitt and Michael Ornstein

The Players’ Side: The NFL has mischaracterized the evidence and there is no proof that the players engaged in a pay-to-injure scheme (i.e., the players believe that the suspensions were arbitrary and capricious). In particular, the players have noted that Vitt and Ornstein made public statements contradicting some of the NFL’s findings regarding the bounty scheme.

The Commissioner’s Side: Most of the NFL’s findings were consistent with Vitt’s statements. And, to the extent that there were inconsistencies, those findings were supported by evidence from other sources. For example, although Vitt claimed he never heard a player make statements about knocking Brett Favre out of a game or injuring any other players, the commissioner noted that three other witnesses independently told investigators that Vilma had made exactly such statements.

Similarly, the commissioner has noted that Ornstein’s denial that Vilma had offered $10,000 for a hit that knocked Favre out of the game was irrelevant because at least two other witnesses confirmed that Vilma had in fact made such an offer.

The Players’ Side: The voice on the video saying “give me my money” (after Favre was thought to have been knocked out of the game) was not Anthony Hargrove’s, further highlighting the lack of evidence against the players.

The Commissioner’s Side:The identity of the player who made the “give me my money” statement was immaterial because, regardless of which player said it, the video corroborated other evidence showing that there was a bounty in place to knock Favre out of the game.