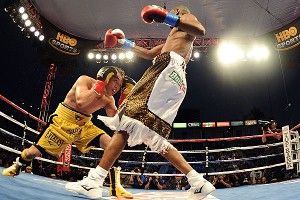 So crowed Jessica Carbone in the sixth round Saturday evening, while her fiancé Will Rosinsky shuffled right and left in front of former middleweight champion Kelly Pavlik. Pavlik had a deep gash over his left eye, but it was pretty clear that Rosinsky, a not-so-heralded super middleweight from Queens, New York, was losing the fight. Rosinsky was bouncing around the ring enough to make it hard for Pavlik to land his powerful right hand, and every now and then Rosinsky managed to sneak inside and land his own looping overhand right. But Pavlik knocked him down in the second round with a short, chopping blow that caught Rosinsky off balance, and Pavlik’s punches were powerful enough to force Rosinsky back even when they were partially blocked.

The fight played out with few surprises — Rosinsky put up a game challenge and Pavlik took another, mostly unspectacular step on his comeback trail after two rehab stints for alcohol abuse. Thankfully, Carbone was there to add some intrigue. Dressed for prom night in a beige mini–cocktail dress and wearing her hair in a brown mane that had been curled and teased and tangled with enough hairspray to burn down the arena, Carbone screeched encouragement in her old–New York feminine growl. “Let’s go, Will! Let’s go! … Only the strong survive! … Gimme the overhand! The overhand right! … He’s dyin’ now, Will! He’s dyin’!” She started in round one and didn’t let up until the final bell. She annoyed some of the fans and media at ringside, but her voice transported me back home. Hearing that accent reminded me of rainbow Italian Ices, Tropical Fantasy soda, and 25-cent bug juice. New York may be a safer, cuddlier place than it was two or three decades ago, but the city still produces some genuine tough guys — and girls.

Now, I understand that the 2010 World Cup was an important event for South Africa, and I don’t know enough about the nation to comment on this musical choice with much authority, but still, it seems strange. Like an American fighter entering the ring to “Party in the USA,” the tone just isn’t right. But then I see Mexican all-time great Julio Cesar Chavez, who’s a few seats away from me on press row, and he’s smiling with his eyes closed while doing a very smooth side-to-side head nod. If “Waka Waka” is good enough for El Gran Campeón Mexicano, then it’s good enough for me.

Midway through the second round, Donaire takes a step toward Mathebula and springs into the air with a leaping, left-handed uppercut. The punch doesn’t land, but it was so quick and unorthodox that the crowd still gasped. The writers on press row started cracking “dragon punch” jokes and whispering “shoryuken!” Donaire tried again and again to spring this Street Fighter move on Mathebula, never successfully. When he finally did catch the much taller Mathebula with a knockdown blow, it was a simple counter left hook that spun Mathebula’s head and probably would have led to a stoppage if it hadn’t occurred at the end of the fourth round.

It feels unfair to nitpick about the fourth or fifth best fighter in the world — which Donaire is, according to most pound-for-pound lists — but there is something unsatisfying about watching Nonito fight. He may have the best combination of explosive hand speed and knockout power in boxing. His footwork is so good that he has been able to dominate recent opponents while fighting many rounds with his hands down by his waist. Against Mathebula, Donaire’s in-and-out, left-and-right movement had the South African champion crossing his legs and twisting his body just to keep Donaire in front of him. At one point, Mathebula was so confused by Donaire’s stutter steps and feints that he opted to just duck and cover with his gloves.

But that was the problem. Instead of following up those dazzling moves with a scoring blow, Donaire would just listen to the crowd ooh and ahh while Mathebula recovered. It was pretty evident from the first round that Mathebula couldn’t handle Donaire’s speed and power, but instead of trying to box and break down his opponent with jabs, combinations, and body punches, Nonito stalked Mathebula around, waiting to catch him with the elusive dragon punch or that perfect, knockout left hook.

Fight fans complain that boxing is no longer a major sport and pine for the days — when many of them weren’t even born yet — when being a world champion meant something to the rest of the world. But if boxing were a major sport, I worry that characters like Nick Durandt, Jeffrey Mathebula’s trainer, might get forced out to the margins. Can you imagine an MLB manager sitting in the dugout, wearing a du-rag over his flowing blond mullet? Can you imagine an NFL coach stalking the sidelines with three gold chains dangling from his neck? Can you imagine an NBA coach flashing play signals to his point guard with hands covered in chunky gold rings? Probably not. Durandt was wearing all the aforementioned accoutrements Saturday night, looking a bit like he was headed for the nearest Hell’s Angels chapter as soon as the fight ended. A character like Durandt would probably have his rough edges smoothed over if he were involved in a more buttoned-up game, and the boxing world is richer for accepting Durandt and the sport’s other hucksters and eccentrics and borderline sleazebags as they are.

After the bell rang to close the twelfth and final round, Mathebula walked to his corner and spit a rope of blood into a bucket on the canvas. It was a pretty haunting sight, caused by a perfect straight right hand Donaire landed in the eleventh. The punch cracked one of Mathebula’s teeth, and it came after Donaire’s trainer, Robert Garcia, pleaded with his fighter to stop waiting to catch Mathebula with a single knockout punch and start boxing. Donaire set up that tooth-splitting right with a jab and a little hesitation, and the punch effectively ended the fight, with Mathebula spending most of the final two rounds in retreat. If Donaire had set up his offense similarly throughout the match, he might have been able to win by knockout instead of unanimous decision.

As Donaire continues his climb through heavier weight classes and the pound-for-pound rankings, I hope he will fight not just like one of the most talented boxers in the world, but also like one of the most serious. Right now, he reminds me of a great ball handler in basketball who can beat his man on every possession but won’t drive to the hoop and finish unless he makes the defender fall down. Often, simply scoring — whether it’s on a string of uncontested layups or a combination of crisp, workmanlike punches — is the easiest path to a blowout.