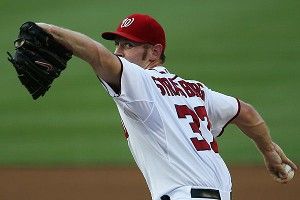 Given the chance, I will ramble on for hours at a time about Major League Baseball’s asinine blackout policy, and how it unfairly deprives me of Nationals and Orioles games, 250 miles southwest, here in Chapel Hill. Prior to 2012, the big problem for me was that I couldn’t watch the 18 Yankees-Orioles games each season. That ranks pretty low on the tragedy totem, particularly since the Orioles were mostly terrible. And the Nationals? They barely merited a footnote in the whole discussion. Then Stephen Strasburg came back full-time from his Tommy John surgery, Gio Gonzalez was traded from the As, and suddenly the Nationals had the most exciting one-two punch in baseball. With the emergence of Bryce Harper, and the terrific third-spot pitching of Jordan Zimmermann, the city that had last won a World Series in 1924 and last made the postseason in 1933 was now home to a first-place team.

And in North Carolina, they weren’t on TV. So this weekend, with Strasburg set to pitch Friday and Gonzalez in line for Saturday, in a three-game series with the Rockies, I decided to beat the blackout by driving up to D.C. to see them in person. If you’ve missed out on these guys so far, here’s a quick recap: At the All-Star Break, they’re top seven in WAR in baseball. Both have ERAs under 3.00, and are top three in FIP, trailing only Zack Greinke. Both are All-Stars (unlike Greinke), and both strike out batters at extremely high rates (first and third, respectively). I could go on, but you get the gist: These guys are really, really good.

The first thing you have to know about D.C. this weekend it was really, really fucking hot. It’s the kind of heat in which, try as you might, you can’t really talk or think about anything else. ESPN says Friday’s game was 96 degrees, and that was for a 7 p.m. start time. Believe me, it felt hotter. Saturday clocked in at 101 and seemed to get worse as the game wore on. The reason I tell you this is not just to complain about the weather, but to qualify my evaluation of the Nationals fans, which is pretty okay, definitely not great. The turnouts were impressive (28,000 per night) for a holiday weekend in brutal conditions, but the overall spirit was a bit muted. But again, that heat; just showing up was fairly taxing, so I reserve final judgment on the fans.

Man, if there are any fellow seat-poachers reading, I highly encourage you to take a trip to D.C. I hope I don’t spoil it, but right now the ushers don’t even check your ticket in any section except the one directly behind home plate. I sat 15 rows up on the third-base side for both games, probably the best seats I’ve ever had at a baseball game, and it wasn’t even hard. Coming from Yankee Stadium, where the ushers are legally allowed to tase you if you even look longingly at a rich person’s seat, this was amazing — and also, I’ll admit, a little disappointing. I was all geared up to use any number of covert tactics to infiltrate the good seats, and none of it was necessary. It’s a little like psyching yourself up for a big game and then having the other team forfeit. It’s nice to win, I guess, but where’s the challenge?

The sign of a really exciting pitcher is that he’s a delight to watch even on a bad day. And believe me, Strasburg passed the test. (Although I should put “off day” in quotes — in the second inning, Tyler Colvin hit a pop-up behind home plate that catcher Jesus Flores straight-up dropped, and two pitches later Colvin showed what happens when you put a nice swing on a 97 mph fastball — 396 feet to right. Colvin connected again in the fourth after a terrific nine-pitch at-bat, but a lot of the other hits Strasburg gave up seemed to result from a really slow outfield, particularly Michael Morse in right. Put it this way: It was one of the best six-inning, three-run losses I’ve seen.)

He throws three pitches, for the most part: a 95 to 98 mph fastball, a changeup that fluctuates between 88 and 90, and a 79 to 81 mph curve (he mixes in a two-seam fastball, but it’s rare, and the velocity is about the same). According to FanGraphs, his curve is the second-most valuable in the game, after Justin Verlander, but it’s the changeup that seems most impressive to me. It’s so slow, in comparison to the fastball, that it flummoxes the batter — but so fast (it’s 90 mph, for God’s sake!) that you can’t recover. It’s beautiful to watch, especially when he keeps it low and in the dirt.

The most exciting at-bat against Strasburg came when Carlos Gonzalez (.330/.389/.578 this year) came up in the first inning. It was an eight-pitch battle, and Strasburg went with a very simple formula, alternating fastballs and changeups with each pitch. CarGo laid off the first low fastball, but whiffed on a beautiful curve on the outside corner. Strasburg came back with a fastball, just slightly low, and Gonzalez laid off. Watching this, it was fascinating to see how the advantage shifted back and forth between the players with each pitch. Another change gave the edge back to Strasburg at 2-2, and the battle was on. Fastball inside, just barely, more great discipline from Gonzalez. Changeup, barely fouled off. Fastball again, fouled off. And, finally, the full-count changeup in the dirt, a ballsy pitch that Gonzalez could only flail at. Victory for Strasburg, though CarGo would get him back later. These are the wars that make live baseball great, even when Mother Nature is trying to kill you.

If he’s not quite as exciting as Strasburg — he doesn’t throw as hard — Gio Gonzalez still cuts a pretty damn compelling figure on the mound. He earned his league-leading 12th win on Saturday with a typical six-inning, three-hit, one-run effort. Unlike Strasburg, Gonzalez throws a fastball 70 percent of the time, mixing between a straight pitch that tops out around 94 (on par with Strasburg’s in effectiveness), and a two-seamer with more movement. His curve is also among the league’s best, and he has a mid-80s changeup he’ll use every so often.

Again, we’ll go back to poor Carlos, who struck out three times in the Gonzalez vs. Gonzalez heavyweight bout. The first at-bat was a clinic — three straight outside fastballs to go up 1-2, and then a curve in the dirt for the strikeout. Easy peasy. His second time up, in the third, CarGo was severely disappointed if he was looking for fastballs. Gio froze him on the first pitch with a beautiful curve that fell right in the zone, brushed him back with an inside curve, and then threw a third straight curve outside. On the 2-1 hitter’s count, Gio spotted a 94 mph fastball on the lower insider corner, handcuffing CarGo into a swinging strike, and then finished him with the fourth curve, inside and low. The first two at-bats were a study in contrasts; hard and outside, slow and inside. When he came up again in the sixth, Gio started him with another curve over the heart of the plate, which CarGo (hoping for a cheap hit) bunted foul. Ahead 0-1, Gio confused him with a hard inside fastball, going against the formula for a ball. After that, two straight swinging strikes on low, inside curves sent Gonzalez packing for a third time.

It was a virtuoso performance against one of the best hitters in baseball, each at-bat building on the last, and a sign of the great intelligence Gio brings to the mound. I expressed my satisfaction by groaning from my seat and trying to steal ice from the beer man’s cooler.

The Best Non-Strasburg/Gio Moment of the Weekend

Rex Brothers, a relief pitcher for the Rockies, has one at-bat this year, and it came on Friday night. Unfortunately, it happened to come against Henry Rodriguez, the Nationals reliever who regularly hits 100 mph on the gun. Brothers had the look of a guy who would rather be anywhere else in the world, and he stood statue-still as the first pitch came in for a strike. Rodriguez dialed his next two pitches up to 99 and 98, but both came in low as Brothers watched. Maybe I’m guilty of mind-reading here, but he had the posture and look of a guy who was thinking, Jesus, just strike me out already. Rodriguez took the hint and grooved the next two pitches in the zone. Brothers never took the bat off his shoulders, and the happiest he looked was when he walked back to the dugout.

I looked up his career stats for fun, and Brothers has had exactly one other at-bat, last year against Ernesto Frieri. The result? Three-pitch strikeout. That’s a career line of 0-2 with two strikeouts, and zero swings in eight pitches. I think it’s fair to say his interest lies elsewhere.