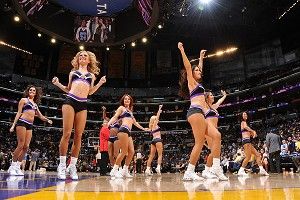 I grew up going to Warriors games during stages nine through 26 of their grief. It was an occasionally uplifting but ultimately demoralizing time. My clearest musical memory of those games was that after a fourth-quarter Warriors scoring run, a crudely animated pair of anthropomorphized lips would lip-synch to Aretha Franklin’s “Respect” on the arena’s aging scoreboard. The crowd loved it. I loved it, even when I was 15 and all I wanted to listen to was antisocial rap music, Led Zeppelin, and alt-rock songs about how girls are confusing.

It’s strange which songs become attached to certain teams. An Alan Parsons Project instrumental from 1982 is now tied to the legendary Chicago Bulls of the 1990s. Studio wizard (and true star) Todd Rundgren’s “Bang the Drum All Day” plays any time the Green Bay Packers score a touchdown at Lambeau.

Earlier this week, I watched the Lakers play the Nets at Staples Center and tracked the game through what I heard.

7:07 p.m.
Calvin Harris, “Feel So Close”
After the code-of-conduct guidelines and emergency evacuation instructions are dutifully broadcast over the PA system, Calvin Harris’s call for smooching and back rubs in the club plays to a quarter-full arena.

7:11 p.m.
Rare Earth, “Get Ready (Papa Was a Rollin’ Stone)”
It can be a long trip from Brentwood to downtown L.A. Thanks for making the drive.

7:14 p.m.
Eurythmics, “Would I Lie to You?”
Two minutes into Annie Lennox and Dave Stewart’s Motown tribute, the Nets hit the floor to polite boos and run loosey-goosey layup drills.

7:18 p.m.
Van Halen, “Right Now”
Purple and gold spotlights roam the still-totally-lit-up arena. Then the piano-heavy intro to Van Halen’s attempt to connect with the Choose or Lose Generation heralds the entrance of your Los Angeles Lakers.

7:19 p.m.
Drake, “Headlines”
Before the now half-full capacity crowd can catch a magic moment from Sammy Hagar (you miss the beat, you lose the rhythm), the song fades into Drake’s “Headlines” and the Lakers take the floor. The atmosphere inside Staples Center immediately perks up. Still, the crowd acts like they’re a little in shock, fumbling for their camera phones despite the fact that being in the same building as the Lakers is exactly why they’re here. It’s like Courtney Cox has just walked into the Coffee Bean where you’re killing time before a meeting, never mind the fact that you’re the world’s biggest Courtney Cox fan and you know that she lives a quarter mile from this particular Coffee Bean location and comes here every day at this particular moment (RIGHT NOW!).

7:21 p.m.
DMX, “Who We Be”
I don’t know how pre-programmed the music selections are during a Lakers game. Is there actually someone in the upper reaches of Staples Center toggling between meticulously organized playlists? Or is there just a super computer running on algorithms and the gluten-free kettle corn that’s available at the concession stands? Still, I think I recognize the wink of a music fan when I hear this song come on. While the previous selection featured an overdosed-on-confidence Drake crooning “they know, they know, they know,” this DMX up-from-the-gutter anthem is built on the recitation of all things that the abstractified doubters “don’t know”: The hurt, the pain, the dirt, the rain, the jerk, the fame, the work, the game … it seems like an apt pairing of songs for a team of former champions looking to make it back on top, though I might be reading (listening?) too much into things.

7:28 p.m.
Young Jeezy featuring Jay-Z and Andre 3000, “I Do”
All the rap songs played at Staples Center are radio edits, and tonight, after the warm-ups are over, it basically disappears from the soundtrack. The previous selections were only heard for a minute or two before they were curtly interrupted by an announcement or faded out into something else, but this Jeezy semi-hit makes it to the last verse. We don’t get to the song’s end, though, since the only thing worth breaking a 3 Stacks verse for is a mythologizing video package on the Lakers’ history projected on a circular screen that has descended from the scoreboard.

7:35 p.m.
David Mosby, “The Star Spangled Banner”
Mosby delivers an appropriately soulful and respectful rendition. It’s impressive without being showy. I can’t find much about him online aside from the YouTube of him singing the national anthem at a Lakers vs. Bulls game in 2010. It’s linked above, and it’s the only video he’s uploaded.

7:36 p.m.
Vaguely hip-hop instrumental that plays while the Nets’ starting lineup is announced that is so generic that Shazam can’t recognize it.

7:37 p.m.
The Who, “Baba O’Riley”
This serves as the backing music during the Lakers’ starting lineup introductions. Just the guitar introduction instrumental part, though, not the part about rural English alienation.

7:40 p.m.
The Black Eyed Peas, “I Gotta Feeling”
Seconds before tip-off, the Laker Girls are switched to bounce mode for the song that has actually dethroned Kool & the Gang’s “Celebration” as the top song in the world about celebrating things. But since its release in 2009, the party-starting properties of “I Gotta Feeling” have been worn down and no one besides the Laker Girls get on their feet. It’s as if the general public has become immunized to its effects after repeated exposure via awards show red carpet montages and movie trailers featuring Jessica Biel’s smile.

7:50 p.m.
Imelda May, “Mayhem”
The Nets call timeout after a dunk from Pau Gasol with 5:39 left in the first quarter. The Laker Girls perform their first routine of the night to some rockabilly whateverness. More importantly, it’s announced that if the Lakers win and keep the Nets to under 100 points, everyone in attendance gets two free tacos from beloved local taqueria Jack in the Box.

7:58 p.m.
DJ Khaled, “All I Do Is Win” (as performed by the Lakers band)
On the third tier of Staples Center, the Lakers band mostly lay down percussion to get the “DE-FENSE” chant going and play jazzy drum fills to rattle the Nets when they’ve got the ball, but for the first time of the night they trot out a full song: a paired-down marching band take on the theme for the San Manuel Indian Bingo and Casino.

8:05 p.m.
Yello, “Oh Yeah”
With four seconds left to go in the quarter, Lakers center Josh McRoberts, starting in place of an injured Andrew Bynum, catches the inbound pass just behind half court, barely executes a behind-the-back dribble at the 3-point line, flops around for a bit, then hits a jumper as time runs out. It’s the first crowd-zapping moment of the night and the gluten-free kettle corn computer responds with the track that Ferris Bueller made famous.

8:09 p.m.
The Notorious B.I.G., “Hypnotize”
Gasol seems to have a special relationship with the No Glutz-O-Tron 5000. His highlight-reel scores elicit brief bursts of music. A second-quarter dunk gets him a few seconds of Biggie. An alley-oop a few minutes later gets Lenny Kravitz’s guitar lick from “Are You Gonna Go My Way.” Another dunk before halftime gets the opening crescendo from the Terror Squad’s “Lean Back.”

8:20 p.m.
David Guetta featuring Nicki Minaj, “Turn Me On”
Another Laker Girl routine. Should have been weirder and less pop-radio friendly.

8:29 p.m.
Pitbull, “Hey Baby”
After a Ramon Sessions foul sends Deron Williams to the floor, the Lakers take a timeout and Pitbull plays at a low volume. It’s like everyone is embarrassed about what just happened.

8:35 p.m.
N.E.R.D., “She Likes to Move”
Halftime. I know this was N.E.R.D.’s first single from their second album, but it was like the fourth quarter of giving a shit about their music. Am I right? Whoa, sorry, I guess we got a lotta Chad Hugo fans here today.

8:37 p.m.
Cirque Du Soleil, “Amazonia”
For the halftime entertainment Duo Design, a pair of guys from Poland dressed like Oscar statues perform feats of balance and strength by lifting each other in uncomfortable-looking ways. They’re performing with Cirque Du Soleil in Las Vegas if you’re interested.

8:44 p.m.
The Laker Band Medley
Featuring “That’s the Way I Like It” and the song they play before the Blues Brothers do “Everybody Needs Somebody to Love.”

9:06 p.m.
Elton John, “Bennie and the Jets” (organ version)
Up until this point in the night, the Staples Center organist had been mainly used to play demoralizing 1950s Italian trattoria music (Riga-toni! Pepa-roni!) during excessively long Nets possessions, but this looping rendition of an Elton John classic ends in a Kobe Bryant field goal as the shot clock winds down, giving the Lakers a 12-point lead.

9:09 p.m.
Rick James, “Give It to Me Baby”
Another Laker Girls routine. Things are getting better.

9:19 p.m.
The Gap Band, “Party Train”
The Dance Cam prowls the arena, preying on children and the occasional woman in her 30s.

9:23 p.m.
Timbaland featuring Pitbull, “Pass At Me”
The Laker Girls are on their fifth outfit change of the night. This one features T-shirts with the Verizon logo.

9:32 p.m.
Cupid, “Cupid Shuffle”
The Lakers have held the lead for the entirety of the game, often in the double digits, but midway through the fourth quarter the Nets start surging and the Lakers seem disinterested in doing much about it. With 4:35 left in the game, Barnes fouls Williams before he has the chance to cut the lead to less than eight. Following a Lakers timeout, this teen dance-craze track from the post–“Lean Wit It, Rock Wit It” era plays at the loudest volume of any song of the night. The Laker Girls take the court to hype up the crowd, but the people aren’t buying it.

9:35 p.m.
Flo-Rida, “Low”
With 3:18 left to play, the Nets are down by six and the Lakers offense isn’t doing much. The best distraction at this point is to show more dancing children on the scoreboard’s video screens.

9:41 p.m.
Rufus, “Tell Me Something Good”
With 10.8 seconds left in the game and just a one-point lead, the ball ricochets off of Barnes’s hands underneath the Lakers’ basket, grazing Williams’s shorts on its way out of bounds. The refs initially call it Nets ball, but then they review the play. This cheeky selection of 1970s funk has biggest effect of the crowd all night, partially because they’ve already seen the replay.

9:47 p.m.
Zombie Nation, “Kernkraft 400”
The Nets call a 20-second timeout before play can resume. We are now in Jock Jam territory.

9:49 p.m.
2 Unlimited, “Twilight Zone”
With 6.8 seconds left and a second left on the shot clock, Bryant clangs in a 3, effectively ending the game. The Nets call timeout and the instrumental version of 2 Unlimited plays, which is basically the audio equivalent of a Mortal Kombat fatality.

9:52 p.m.
Randy Newman, “I Love L.A.”
Williams’s ultimately meaningless 2-pointer as time runs out is declared no good, Lakers win 91-87, purple and gold streamers fall from the rafters, Randy Newman plays, and everyone gets free tacos.

Eric Ducker is a writer and editor living in Los Angeles. Follow him on Twitter at @mrducker.

Tip Your Cap to This New Era Ad