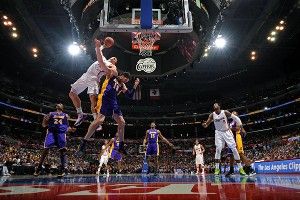 In the locker room after the Lakers’ win over the Clippers last night, Kobe Bryant was asked about an assessment he’d made early in the season about the burgeoning NBA rivalry in Los Angeles. The reporter paraphrased it for him, something along the lines of, “We’ll let them be exciting. We’ll take the wins.” Bryant nodded along as he heard it. In the Lakers’ 113-108 win in the season series’ deciding third game, that notion was fully on display, and deep into the second half, it even seemed as though one was leading to the other.

Everyone has probably seen the play a dozen times by this point.


Like they always are now, it was on YouTube in minutes and trending on Twitter not long after. All things considered — opponent, stage, importance — it was probably the biggest one yet, and Staples Center reacted like it. There’s a moment before each of those Blake Griffin dunks when the entire crowd goes quiet for a moment, a collective inhale in preparation for what’s next. What follows is a combination of screaming, incoherent clapping, and in my case, confused head-shaking. Even Andrew Bynum had to grimace.

The dunk came with just under eight minutes left in the third quarter, at a moment when the Clippers needed something, anything, to jump-start them in a game where Bryant and Bynum had given the Lakers a double-digit lead. The reactions were instantaneous. Griffin finished putting Gasol to the floor with his off-arm and then stood over him just long enough to make his point. DeAndre Jordan gave Blake the two-hand shove to the chest. The crowd exploded again and again as the replay came onto the JumboTron. Randy Foye and Jordan added buckets of their own to cut the lead to five. “Guerilla Radio” played as the Lakers called timeout. There was still some hope for the Battle of Los Angeles.

The problem for the Clippers, even as they clawed their way back to tie the game in the fourth quarter, is that the dunk had just as profound an effect on the Lakers.

After the game, Pau Gasol was diplomatic about what had happened. “You don’t really see it,” Gasol said. “The ball went in and I was on my ass.” The league is filled with great athletes who make great plays, he said. “I’ll probably watch it just because. I don’t have a great desire to watch it, but my teammates told me it was a pretty impressive play.” What seemed to matter more than the play itself was Griffin’s reaction to it.

“When you make a good play, there are a lot of emotions,” Gasol said. “I understand the excitement of it. But you have to be respectful, too. Otherwise you will probably instigate retaliation or a violent reaction. That’s just me.”

The reaction was a return to some of the physical play that had distinguished the earlier games between the two teams this season. Each time the Clippers moved into the half-court, Gasol was there to meet Griffin with a body. With about 3:30 remaining in the third quarter, a double foul was finally issued as arms began to wrap around necks. Griffin struggled to score for the rest of the game, going 2-7, including a swat by Gasol, who clearly still had something to say about what had happened.

Many of the Lakers did. After a breakaway layup with seven minutes left gave Bynum 33 points and moved the Lakers’ lead back to five, he gave a long look toward where Griffin sat on the Clippers bench. When Kobe drilled a contested 21-footer with 24 seconds to put the Lakers back up four, he airplaned his way back down the floor all the way to his seat.

“When we have a little chip, I mean, it’s like redlining on a shift,” Bynum said. “You don’t want to go all the way to the end because you get a little bit of lag. You want to hit the perfect shift. We do play well when we have a certain edge to us, but when you go off the edge, it’s not good.”

Bryant was expectedly dismissive of any notion that what had happened galvanized his team. “I would’ve done the same thing,” he said of standing over Gasol. In the end, though, it was two points in a game where Griffin had just 15 and Bryant and Bynum combined for 67 on only 39 shots. “They’re going to make some spectacular plays,” Bryant said. “We’re not going to make many spectacular plays. We’re just going to do what we do.”

“We got the dub,” Bynum said as he walked to the trainer’s room. “They can have the highlight. I’ll take the dub any day of the week.”

Bill Murray Is Still the Best