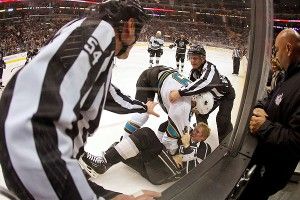 The L.A. Kings blew a chance to clinch their division (and a no. 3 seed) Thursday night, losing a shootout at home to San Jose. Those two teams play again on Saturday night, in San Jose, with the winner getting the no. 3 seed and the loser getting the no. 7 seed. (Late note after we posted: Apparently Phoenix can win the division as well by winning its last two games. I’m not too concerned because, again, it’s Phoenix.) None of this really matters because seeds don’t matter in hockey — anybody can beat anybody anywhere at anytime — but for the die-hards sitting in my section, it mattered for two reasons.

1. The no. 3 seed potentially means an extra playoff game (Game 7, no less). Like everyone else who bought Kings playoff tickets, I wanted that extra game. Badly. I was rooting for the Kings like they were a Boston team last night.

2. I know this sounds impossible, but in 44 years, the Kings have only captured one division title. They even put up a banner in Staples Center for it. Is there a better way to prove your fans have been tortured than hanging division banners, or even worse, having one of those fans say during a game, “We need to get that banner?” (And yes, I heard someone say that last night.)

So last night’s battle against the Sharks felt like a de facto playoff game. You can always judge the chippiness of any hockey game by the number of times after a goalie freezes the puck when an opposing forward does the “go an extra couple of feet and abruptly stops right in front of the goalie just in case the puck falls out” move, then at least one opponent whacks him in the face and they do the whole “Hey, what was that????” staredown/shoving/sarcastic swearing routine. The Kings and Sharks did that after just about every whistle.

It turned out to be the weirdest Kings game I attended all year: 10 goals, three fights and one dumbfounding moment. Late in the third period, with the Kings pressing on a power play and Jarrett Stoll flying up the ice on a two-on-one, the evil Ryane Clowe (a bearded bully on the Sharks who had already scored a goal and won two fights) broke up the breakaway by deflecting the puck with this stick. This wouldn’t have been a big deal except, you know, CLOWE WAS SITTING ON THE BENCH AT THE TIME!!!! Did all four referees miss him doing this? Of course they did. After the 75th time they replayed it on the video screen, everyone knew the Kings would lose because that’s just how hockey works — when you get screwed over on something like that, there’s no bouncing back. Their pathetic goose egg in the ensuing shootout was almost preordained.

Of course, that wasn’t my biggest takeaway from Thursday’s game. Like always, the Kings got their asses kicked in all three fights. I grew up watching Terry O’Reilly, Stan Jonathan, John Wensink, Wayne Cashman, Al Secord and everyone else on the Big Bad Bruins, a team that fought so much, they even climbed into the MSG stands once to fight Rangers fans. The Bruins always know how to scrap; it’s been that way for my entire life, and really, you couldn’t have it any other way in Boston. So it’s been disorienting to watch the Kings keep getting beaten up. Thursday night, Joe Thornton pounded Drew Doughty so relentlessly that we were watching it the same way Apollo Creed’s wife watched the Drago fight. A little bit later, Clowe jumped Matt Greene and cruised to a lopsided decision. In the second period, Cloweavenged a Kyle Clifford five-minute boarding penalty by whupping Clifford pretty decisively. After that, the Kings decided to stop fighting the Sharks.

Was it a coincidence that the Sharks rallied back from a 3-1 hole after winning those three fights? Maybe, maybe not. After Clowe beat Clifford, he was skating to the penalty box and turned around to sarcastically shrug to the Kings bench, as if to say, “You guys are wimps.” And to a certain degree, that might be true. They’re a finesse team with one pseudo-enforcer, Kevin Westgarth, who’s been a healthy scratch since February 16. Clifford, Greene and Colin Fraser throw down with little success. That’s about it.

According to hockeyfights.com, the Kings have been involved in just 33 fights this season. If you’ve never been to that site before, it’s like Rotten Tomatoes crossed with YouTube for hockey fights — not only do they post clips for EVERY fight, their users even vote for the winners. (By the way, if you had told 1980 Billy Simmons that, some day, he would be able to watch any hockey fight that happened and vote for the winner, his head would have exploded.) Just for fun, I tallied up the Kings’ voting results. They started the season with two wins, six draws and no losses. From there, things went downhill with a 3-20-2 cold streak that included the Kings losing their last eight fights. They haven’t won a fight at home since Mike Richards beat Phoenix’s Martin Hanzal on February 16. Trust me, I went to that game — it wasn’t exactly an ass-whupping.

Might 3-20-2 be a bad postseason omen? The NHL playoffs are all about picking scabs — you look for any weakness you can find, and once you find it, you just start picking away at it. The Kings have a well-balanced team with an outstanding goalie, and they chase the puck pretty relentlessly (at least lately). But you can push them around, and if you want to make a cheap run at Kopitar, Quick or anyone else, you definitely don’t have to worry about someone making you pay. After sitting through half of their home games this season, that’s their biggest flaw (that I can see, anyway).

For instance, the Bruins have a respected enforcer (Shawn Thornton), but they also have Zdeno Chara, Milan Lucic, Gregory Campbell, Adam McQuaid … it’s not a team you push around. Whenever I’m watching the Bruins and someone gets chippy with them, you know they won’t stand for it (and if anything, they’ll embrace it). You can’t say the same about the Kings. Nobody captures their identity better than Dustin Penner, their frustrating 6-foot-3 forward who’s evolved into something of a whipping boy for the Kings faithful. One of the biggest guys on the team, Penner barely throws checks, much less punches. Every time he wades into the corner and goes through the motions of not hitting someone, you hear this chorus of pissed-off “COME ON, PENNER!” hisses coming from every direction. It’s actually taken a life of its own, at least in my section, where fans instinctively yell “COME ON, PENNER!” at other Kings who don’t finish checks. Strangely, all of this makes me root for Penner — I always want him to do well, just because it’s funny when he scores and the fans instantly flip that switch and pretend to be Penner fans again. But if you’re trying to win the Cup? You need less Penners and more Ryane Clowe.

You know who summed it up best? My 6-year old daughter, who has somehow attended a whopping 14 Kings games this season and wants to marry Anze Kopitar. (I wish I were making that up.) We were watching the Zamboni drive around between the second and third periods last night when she suddenly piped up, “Hey, daddy, why doesn’t someone teach the Kings how to fight?” Let’s hope that doesn’t become the epitaph for their 2012 season.