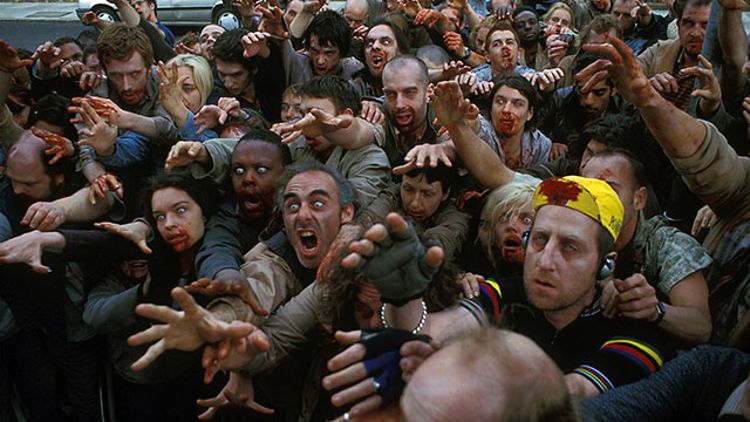 The Zombie Era just won’t die — this weekend, Brad Pitt arrives on the big screen to mow down the reanimated hordes in World War Z, and AMC’s The Walking Dead has been renewed through approximately 2084. So it seemed as good a time as any to take stock of our long-standing relationship with the undead in film and TV. Here are the Grantland staff’s picks for best zombies.

Mark Lisanti: The 2004 remake of George Romero’s Dawn of the Dead feels all but forgotten because of the Great Zombie Glut of the past few years, but there are two elements here that cement its place in history: fast zombies and Sarah Polley. The novelty of undead flesh-munchers with sprinting instincts has since faded, but the presence of Polley in a zombie movie will never not be delightful. The only other thing in her filmography that compares is Splice, which you should go watch immediately because some stuff goes down with the Splice that will come rushing back any time Adrien Brody appears on your television to smarm up a cold glass of Stella Artois, giving that overpowering and not-unreasonable desire to splash bleach in your eyes some real urgency.

Oh, yeah, Dawn was Zack Snyder’s first feature. But you probably don’t care about that because he ruined Superman. He didn’t ruin zombies. This is a safe space.

Sean Fennessey: I’m not going to belabor the point: This is a clip of a zombie fighting and biting a shark from Lucio Fulci’s Zombi 2. I am certain it is exactly what Eadweard Muybridge envisioned when he created the earliest forms of motion-picture technology.

Dan Silver: (Warning: This clip contains some gruesomely hilarious content, and may not be appropriate for those with weak stomachs or poor senses of humor.)

If Sam Raimi and Edgar Wright are the chocolate cookies, the creamy center of the “Scare-Com” Oreo would be Peter Jackson. Before he was trolling around Middle-earth, Jackson worked off micro-budgets armed only with toxic waste barrels of fake blood; a battalion of prosthetic, model/puppet, and makeup artists; a throng of handheld cameras with wide-angle lenses; and plenty of influence and reverence for both the comedy and horror genres. Dead Alive never ceases to entertain or gross out.

Bryan Curtis: If you grew up in Texas — especially Austin — Robert Rodriguez is a person you’re geographically obligated to like, joining Willie Nelson, Ann Richards, Kinky Friedman, Rick Linklater, the guys who created Whole Foods, and (until January) Lance Armstrong. I didn’t like Rodriguez, despite a lot of tries. Since El Mariachi, every movie felt like it contained the germ of a good idea but amounted to a bunch of heavily digitized, lightly directed set pieces, which were filmed while Rodriguez was strumming his guitar. Rodriguez had style but he didn’t have sense.

So Planet Terror was a surprise. It came early in the Zombie Era. Its plot was happily insane. (“He then attacks Dakota with her own anesthetic syringe needles, stabbing her repeatedly in the hands, rendering them useless, before locking her in a closet to tend to other patients, including Cherry, who despite her injury does not die.” What?) But for once Rodriguez felt like he kinda-sorta made a movie rather than just riffing on movies. He outdid his pal Quentin Tarantino, whose half of Grindhouse was a dud. I’ll never forget Rose McGowan’s lifeless face — and she wasn’t a zombie!

netw3rk: 28 Days Later not only reinvigorated the zombie horror niche, it also perfectly reflected the paranoid, phobic, post-9/11 zeitgeist into which it was released. All the more amazing, considering it was mostly filmed before 9/11. Danny Boyle smartly updated the lumbering, unexplained, undead flesh-eaters of the 1960s and 70s by making them fleet-footed, living people who have been infected by an experimental virus that spreads murderous rage. The “fast zombie versus slow zombie” debate is one whose merits are still being argued, hilariously enough. I prefer the modern, viral take. The world moves faster now; I want my zombies faster too.

Emily Yoshida: When was the last time you actually watched the whole “Thriller” video all the way through, not just some 30-second snippet on some Fuse “100 [Adjective]iest Videos of the [Decade]” programming block? (I mean no disparagement, “100 Sauciest Kinetoscopes of the 1890s” was a real curatorial triumph.) It’s seriously one of the most reappropriated, arguably overrated pieces of pop culture from the latter half of the 20th century, but I know I hadn’t actually sat down and given it my full attention for at least a decade.

Anyway, if it’s been a while for you, too, then the entire dance sequence from 8:28 is worth a revisit. Those long, uncut shots of that classic, ice-cold choreography feel downright luxurious when compared to anything contemporary that doesn’t involve Beyoncé. And while I personally don’t really care about zombies, zombie dancing has of course been undeniable ever since this and this. If I was serving a 20-year sentence, I’d probably take the time to learn it, too.

Shaun of the Dead

Patricia Lee: This scene shows an almost unbelievably believable obliviousness that logically does not make sense until you reflect on what you’re like in the morning without coffee (or bagels, or whatever). Shaun, stumbling, tired, and basically half-dead himself, notices exactly the wrong things at the right time, or rather nothing at the right time. He walks past a shattered windshield in a car but promptly forgets about it because he trips on the curb. He opens the soda fridge to grab a Coke, too busy reading either the expiration date or the calorie count to notice the bloody handprints on the door. He goes through this zombie-like state completely unaware of it all while the audience is totally in the know and jumpy, expecting some dead, bloody guy with a hatchet to come attack this beloved, yawning spitting image of ourselves. I probably identify with this scene way more than I should, but that just means that when the zombie apocalypse comes I’ll be the person sitting on the couch eating ice cream and sipping on Diet Coke when Brad Pitt comes to save me, right?

Andy Greenwald: Anyone familiar with my Walking Dead recaps knows I’m not super into zombies. Don’t get me wrong, as metaphors for mass contagion you could do a lot worse (like, I dunno, the movie Contagion). But I feel overwhelmed by the staggering sameness of the drooling, flesh-rending films that have crowded our multiplexes these past few years, most of which have more brains on the menu than in their heads.

My two favorite zombie flicks are the ones that manage to retain humanity’s most glorious, life-extended attribute: Not the ability to jam a screwdriver into an eye socket, but a sense of humor. Shaun of the Dead was magnificent, but I loved the video-gamey glee of Zombieland, particularly when it busted out its tonally perfect surprise cameo: Bill Murray. Zonked on ganja, sporting a fitting-in fright wig that makes him look remarkably like a bloated Eddie Van Halen, Murray effortlessly satirizes celebrity exceptionalism (all the yoga thank yous!) and himself (“I like to get out, you know.” We know!). This scene is just so great, and it’s made even better by the fact that seeing a vacuum-packing Murray yell at Woody Harrelson not to cross the streams is the closest we’ll ever get to a Ghostbusters threequel. Zombies are undead, but the brilliance of Bill Murray will never die.