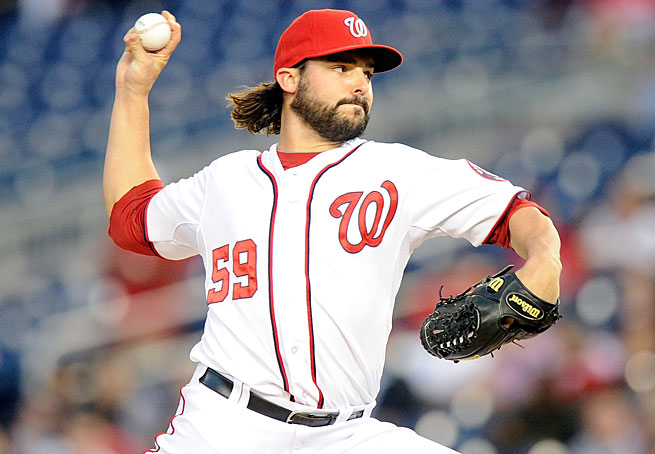 Who Is He? Nationals righty Tanner Roark.

Where Is He From? Wilmington, Illinois, where he led the Wilmington Wildcats to high school state baseball titles in 2003 and 2005.

How Old Is He? He’s 27, which makes him 18 years older than the Washington Nationals, 128 years younger than Nationals sideline entertainer Teddy Roosevelt, and roughly the same age as Bon Jovi’s Slippery When Wet.

His Game in 70 Words or Fewer: Roark relies on his sinker, which is pretty average in terms of velocity and movement but nonetheless gets the job done. He also mixes in an 83-84 mph slider against right-handed hitters and an 83 mph changeup against lefties. Meanwhile, his 74 mph curveball produces a 51.41 percent swing rate, good for third in the majors, and drops an impressive 9.71 inches before reaching home plate. It is absolutely gorgeous.

Follow the Bouncing Ball: After two years at the University of Illinois, Roark decided he had had enough of the Ron Zook era and left to join the independent Frontier League’s Southern Illinois Miners. Despite a 21.41 ERA in three starts with the club, the Rangers selected Roark in the 25th round of the 2008 draft, allowing him to fulfill his lifelong dream of playing professional baseball for a team named after massively destructive wildfire.

In July 2010, Roark was traded to the Nationals for Cristian Guzman. He bounced around the Nats’ farm system for the next three years, and was finally promoted to D.C. on August 6, 2013, debuting in the bullpen. His first start came September 7 against the Marlins, and he was lights-out over six innings, giving up no runs or walks on just four hits. Roark pitched well enough to earn a spot in the rotation heading into 2014, and his reign of terror has continued apace. With a superb 1.06 WHIP and a 2.92 ERA, he’s even outperforming teammate Stephen Strasburg.

Roark maintains an Amish social media presence, which is probably one of the main reasons he’s so good at his job. Our professional lives would undoubtedly improve if we did the same, but I for one need Lil B’s tweets to get through the day. Needless to say, there are no Cy Youngs in my future.

Fun Fact: Perhaps due to his low online profile, Roark has quite the Reddit following, where the denizens have taken to calling him ROARK FLAIR, among other terrible/delightful nicknames.

I think I’ve discovered the secret to Roark’s success: Ted Nugent’s voice is a performance-enhancing drug. This is scientifically factual.

Video Vault: Just in time for Christmas in July, here’s Roark strumming away to an unidentified Yuletide carol! While there’s no way to confirm whether this is the Tanner Roark, it certainly looks like him. Get in the holiday spirit, people.

Should We Know Him? Yes. Though the Nats have lost four straight, they sit just a half-game back of the NL East–leading Braves and boast the division’s top run differential (+37) by a comfortable margin. According to ESPN.com’s calculations, they have a 63 percent chance of making the postseason, in no small part because of Roark’s unhittability. As long as he can throw a sinker, he’s worth keeping an eye on.