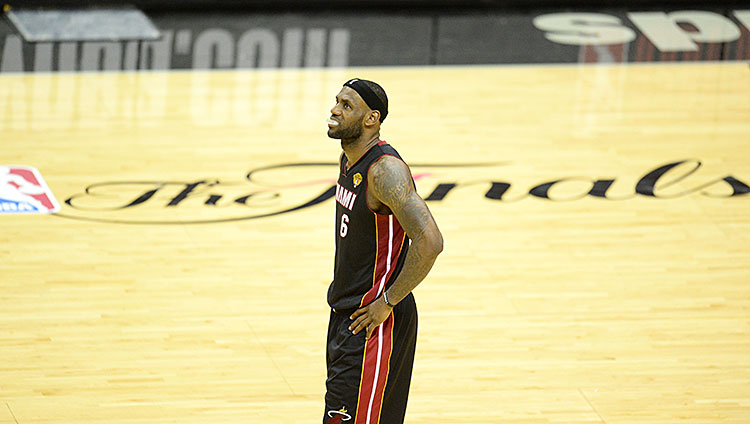 Let’s start with the 2011 Finals. Remember that series? It was so glorious. The heavens parted and delivered the kind of upset that would’ve been too perfect to make up. I’ve never gotten more joy out of the NBA Finals.

It started with the Heat winning the first game, and leading most of the second. Then Dwyane Wade taunted Jason Terry with the Heat up big in Game 2, the Mavs came back with a 22-5 run in the fourth quarter, and it became a whole different series. A week later, Wade and LeBron James were mocking Dirk Nowitzki’s flu in the hallway of Dallas’s stadium. A few days after that, LeBron had melted down in the biggest games of the season, and the Heat watched Nowitzki raise a trophy in Miami.

Birdman — the rapper, not the player — lost a million dollars betting on the Heat. Mark Cuban bought a $90,000 bottle of champagne. DeShawn Stevenson rocked a shirt that said, “LeBron, how my Dirk taste?” Nowitzki showed up the next day wearing a shirt that read, “I’m That Dude.” Everyone celebrated at club LIV, and then on the Mavs’ plane, and then all over Dallas. Stevenson celebrated in someone else’s apartment building. It was all part of the most satisfying Finals of my life.

Four years after The Decision, three years after that Mavs disaster, this year’s Finals celebration was nothing like that.

There was no universal bonfire of schadenfreude like the last time Miami lost. This wasn’t a sweeping statement on LeBron’s character, or his legacy, or what makes true champions. Nobody needed a LeBron loss to confirm a worldview, or to prove that The Decision was everything that’s wrong with sports. We’re past all that.

Now we have a new, weirder dynamic. On one hand, nobody who’s serious about the NBA wonders about LeBron’s greatness anymore. He has no credible critics. Save for one or two outliers, mainstream writers are as universally reverential of LeBron in defeat as they are of the Spurs in victory.

On the other hand, if you think LeBron hate doesn’t exist anymore, all you have to do is scroll to the bottom of almost any Heat article on the Internet, and you’ll find scores of people in the comments section scolding him for not being Michael Jordan. Or being too selfish. Or being too passive. Or … I was on Facebook after Game 5, and someone I knew in college wrote a long screed saying that LeBron isn’t a true leader because he didn’t keep playing until the end during that blowout loss Sunday. It was incredible. It’s all incredible.

When it gets complicated is when both sides feed off each other. When the rational people from the first group feel the need to frame all of their arguments as a response to the crazy people in the second group, and the haters in the second group use it all as proof that LeBron’s the most overhyped athlete of his generation. This makes almost every conversation about LeBron James unbearable.

I can’t even decide which is more obnoxious anymore, the hater or the LeBron lover who stupidly joins the argument and keeps it all going. It shouldn’t be this hard to talk about someone this great.

So, let’s look closer at both sides here. 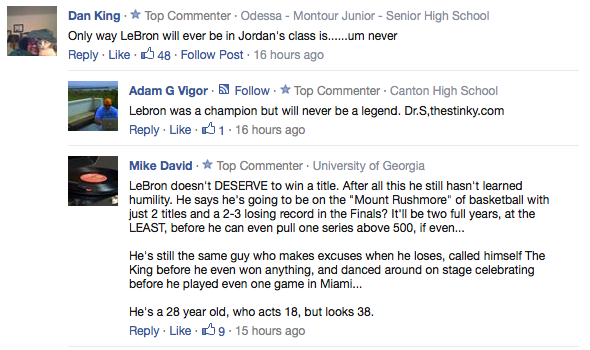 Reading the comments on any mainstream LeBron article will make you depressed that every adult is allowed to vote in this country. “LeBron was a champion but will never be a legend.” What does that even mean? How do these people still exist?

It was one thing in 2011. Some of that criticism made sense.

Back then, LeBron was one of the most self-conscious superstars we’ve ever seen. In big moments, you could almost see him overthinking things, and it obviously killed him in the Finals. But that trait disappeared over the past few years. Instead we have this monster who makes the right play every time and can take over games in five different ways.

It’s a lot more fun to watch this version. We’re not constantly wondering why he’s not taking over games. He flips that switch almost every night now, and we just get to sit back and watch, rooting for it to get as ridiculous as possible. Even as he was going down to the Spurs, LeBron was attacking the rim, hitting long pull-up jumpers he used to be afraid to take, and never once conceding anything the way he did in 2011.

If you’re wondering why there’s less mainstream criticism of LeBron in 2014, it’s because his biggest weaknesses stopped existing. He’s won two titles, he’s maxed out every gift he has, and he carried this Heat team all year.

What more do people want? Does anyone think Michael Jordan would’ve won a title with Dwyane Wade and Chris Andersen dragging themselves up and down the court? Maybe LeBron doesn’t have the résumé that Jordan or Magic or Bird had, but he’s amazing enough that it’s not crazy to say that he’s as good a player as they were.

There are the people who say he’s trying to cheat the system. Or he’s too entitled. Or something. There was a time when we all sounded like that. That was 2011.

It’s time to move on from the era when the whole world accidentally agreed with Dan Gilbert. I say this as someone who cheered harder for the Mavs than any NBA Finals team ever. That’s where I was at 23 years old. I made fun of Chris Bosh crying; I called LeBron an idiot; I swore he was soft.

It was fun at the time, but all of that LeBron hate is pretty embarrassing in retrospect. Like remembering how much you loved Entourage when it first started. Some things age better than others.

Meanwhile, the people who sincerely think LEBRON NEEDS SOME MIDOL, BRO might be literally the same people who are counting the days until the Entourage movie. These are not people you want to have basketball discussions with.

You know what might be worse than someone still obsessed with Entourage? Anyone who feels the need to lecture that person about how wrong they are.

That’s what happens with LeBron. I do it, too. We all take on this smug, sarcastic tone in LeBron discussions, because anyone criticizing him as a player is obviously wrong, and thanks to Facebook comments and Twitter mentions, it’s easy to find examples to make the backlash seem a lot more serious than it is.

It’s turned into this weird inversion of the outrage cycle, where there are more people outraged at haters than there actually are real, intelligent people who think LeBron sucks. We talk about how wrong the LeBron critics are, but I don’t know if LeBron’s had a real, credible critic in 24 months. (Skip is in his own category. That is performance art.)

The idiots are bad, but the smart people who take them seriously might be even more unbearable. This happens on Twitter constantly, and it trickles down to how we all view LeBron.

It’s gotten to the point where you can’t criticize LeBron for anything. You can’t say that LeBron’s cramps were obviously bad enough for him to leave the game, but, man, he sure was dramatic about the whole thing. You’re obviously ignoring everything he’s done to make his team great, and you’re part of the problem, and why does everyone hate LeBron so much, don’t people realize he’s never gotten a fair shake?

But listen. He’s getting a fair shake.

LeBron’s great. He’s a guaranteed Hall of Famer. One of the greatest ever, and he’s still got half his career left. The doubters he had around the NBA a few years ago just don’t exist anymore. He shows up when it matters. He’s the best basketball player on the planet. People who care about basketball know all this.

It’s also completely understandable if casual fans still can’t forgive LeBron for The Decision. Do people remember how ridiculous that whole thing was? LeBron’s not some special class of martyr. If any athlete pulled that in any sport, it would take years to live down. The predictions, the welcome party …

It doesn’t make someone an idiot if they recognize LeBron is great but still don’t care about rooting for him after all that. Or at least, it doesn’t make sense to mock that person every time LeBron does anything, or go off and correct anyone who dares criticize LeBron.

With the people who think LeBron isn’t a real winner, has no heart, will never be MJ, whatever … Why should anyone care what they think? It’s like discussing Obama’s legacy with people who still think he was born in Kenya. 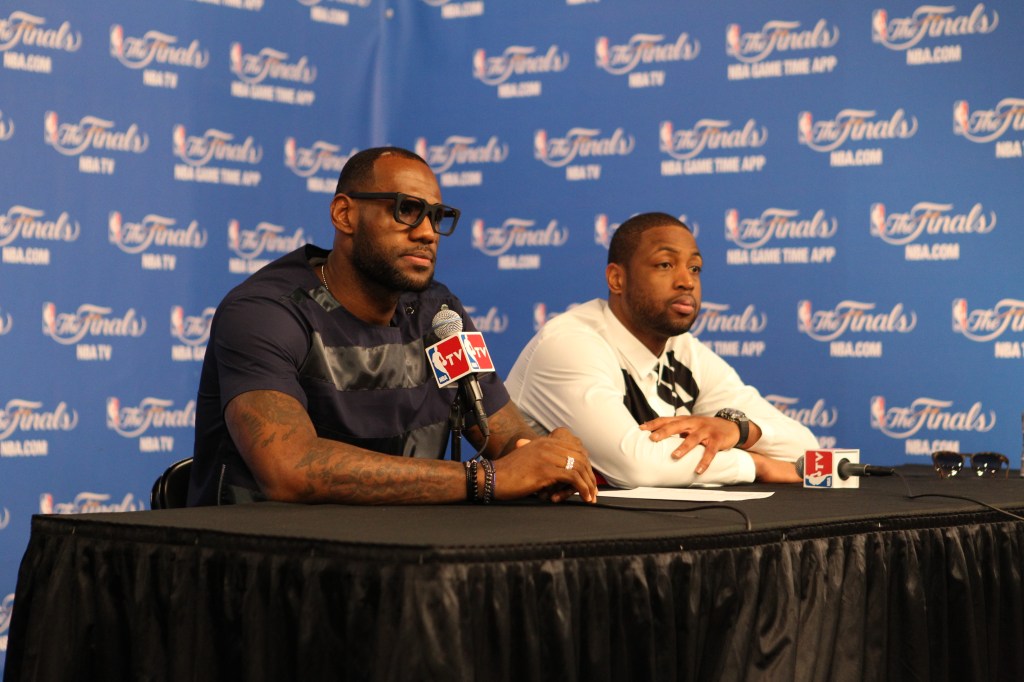 I have no idea which side is worse. None of this would exist without the Facebook truth warriors, but it should be on the smarter side to recognize how stupid it is to keep this argument going. So … Maybe it’s a tie? Maybe abandon the Internet?

It’s obviously a bigger problem than LeBron. We do this all the time. A vocal minority gets amplified by the Internet, it turns into a straw-man argument for smarter people to argue against, and eventually the whole conversation gets dragged to a place where everyone looks bad. I only bring this up today because the best counterpoint comes from LeBron the past few years.

That whole first year with the Heat, he and his teammates defined themselves against all the haters. It started when they lost to Boston on opening night and Dwyane Wade sneered, “Sorry if everyone thought we were going 82-0.”

It ended with LeBron getting asked about his critics when the Heat lost to the Mavericks. When he answered, he was basically speaking directly to the Internet:

At the end of the day, all the people that was rooting on me to fail, at the end of the day they have to wake up tomorrow and have the same life that they had before they woke up today. They have the same personal problems they had today. I’m going to continue to live the way I want to live and continue to do the things that I want to do with me and my family and be happy with that. They can get a few days or a few months or whatever the case may be on being happy about not only myself, but the Miami Heat not accomplishing their goal, but they have to get back to the real world at some point.

He’s not wrong there. He just sounds so smug and obnoxious that it’s impossible to really agree with him.

At the end of this Spurs series, it was a completely different story:

Obviously, they all hurt. This year they dominated us from every facet of the game — offensively, defensively. I mean, they all hurt, but I’ve been able to be a part of five of them, and I would love to sit up here and say I was 5‑0, but I’m not. I’m 2‑3. But a lot of guys don’t get this opportunity to even compete for a championship, and I’ve been blessed to compete for five of them in my 11 years so far.

But if we’re talking about appreciating LeBron’s greatness, hearing him talk honestly about his failures was a lot more convincing than hearing him talk down to his critics. Somewhere in there, there’s a lesson for the rest of us.

Half Baked: One Victory Parade. Two Different Kinds of Tears.