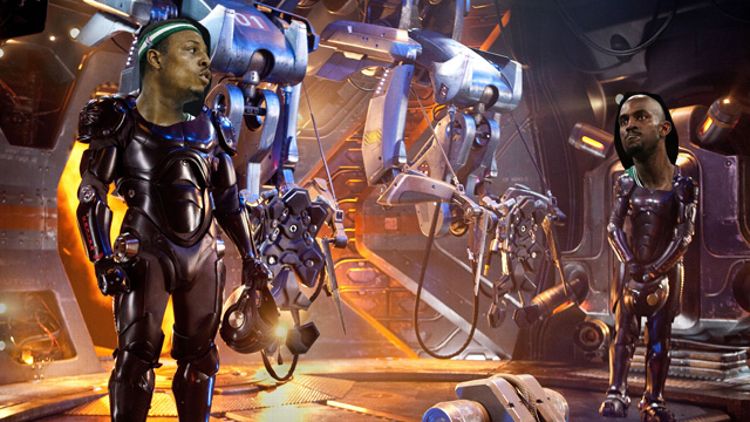 If you haven’t seen it already (and you should), Pacific Rim is a movie about giant robots fighting giant monsters, starring Stringer Bell (+5 for The Wire reference) and a bunch of generic-ass Australian-ish (+1 for made-up word) dudes, including that bro from Sons of Anarchy who looks like what would happen if you grafted Kanye West’s reconstructed jaw onto Heath Ledger’s living face (+3 for Kanye reference). The monsters, called kaiju, don’t need much explanation — they are huge and scary and from another dimension where crab/fishlike creatures don’t lay eggs, but instead get pregnant just like Rory on Gilmore Girls (+4 for ’90s TV show reference). The robots, called Jaegers, are an amalgam of a bunch of popular robot shit — their heads are from Halo, their power plants are from Iron Man, their sword hands are from Gundam (+6 for obscure childhood reference), their infuriatingly slow-loading plasma cannons are from every movie about robots.

In your typical robot movie, the quality of the robot makes all the difference. If the monster is busting your ass, you, as the robot master, either have to build a better robot or figure out some way to make it morph into some half-living, fully torqued robot/human/animal hybrid like a robot who is also a wolverine who is also an important, strong human being like Yasiel Puig (+2 for Puig reference) who carries a spiked bat that he uses to bash the robot of Jonathan Papelbon in the face. NO, YOU’RE A ROOKIE!

Anyway, Pacific Rim is different in that the quality of the Jaeger depends on the two pilots who drive the thing. For some reasons that I will never understand, operating one of these jaegers requires you to mind-meld with your partner and stare like Narcissus (+3 for Ancient Greece reference) into the stream of their memories. If you can see yourself in their stream, you are a good match.

All that being said (+2 for “All that being said” transition), I decided to scour the world of sports (and culture!) to find the best Jaeger pilot combinations. Here are my top three. Please fill in your nominations in the comments so we can, you know, have a conversation!

First, let me collect my 100 points for a Jersey Shore and a Challenge reference.

There will be those who will say that CT and Ronnie should be higher up on this list. They will point out all the things CT and Ronnie have in common — muscles, corroded livers, creatine addictions, massive credit card debt — and argue that CT and Ronnie could just do a bunch of shots of Goldschlãger and rage. They will argue that fist pumping could be a legit finishing move. These are all valid arguments. But I would like to remind you that CT and Ronnie possess just enough combined intelligence to figure out how to work the air conditioning in a rental car. Piloting a jaeger requires you to remember shit like, “Oh wait, there’s a sword” (almost became a problem in Pacific Rim). In a world with only fists, CT and Ron-Dawg would be higher up on the list. But in a world where you have to press buttons and read the writing on those buttons, CT and Ron-Dawg stay here at no. 3.

Name of Jaeger: Rondo Suxxx
Special Move: Getting all up in Jose Calderon’s business

Nobody wants to watch this rusty-ass jaeger in action, but here they are again …

What could be nicer than Torvill and Dean, the greatest ice dancing duo of all time? Who could be more in sync? Who shares more memories of greatness? Who needs more redemption after a disappointing third-place finish at Lillehammer? Fighting a kaiju is an elegant dance. Wouldn’t you want these two dancing that dance?