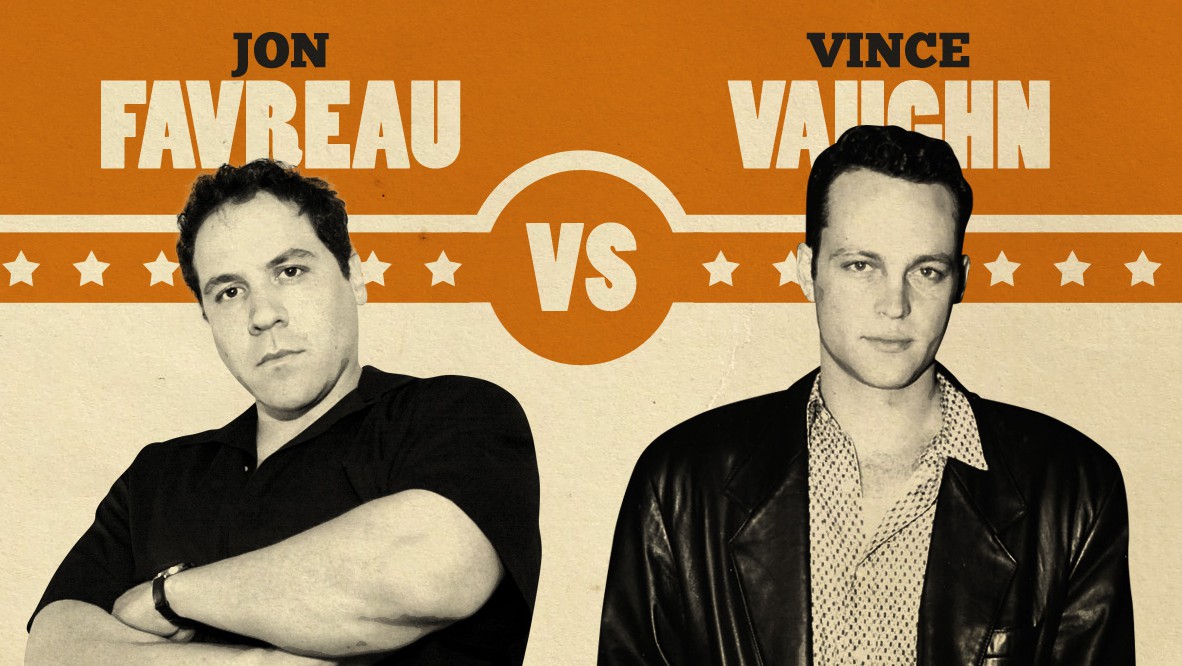 The Upper Hand is where we pit unsuspecting entertainers against one another to determine who currently has a greater grip on the hearts and minds of America. It’s a long way of saying X > Y. It may seem reductive, or even unnecessarily competitive, to put our gentle creators into a squared circle, but it’s a useful exercise in seeing who is doing things right, who is doing things wrong, who is doing things differently, and, of course, who is winning. At the end, a guest judge will hand down a verdict. Today’s debaters are Amos Barshad, on the side of Unfinished Business star Vince Vaughn, and Dave Schilling, arguing the case for Zathura director Jon Favreau. Judging will be Mark Lisanti.

Dave Schilling: Swingers was the movie that made me want to move to Los Angeles. When I first visited L.A. as a kid, the city was at best really crowded and at worst smelled like Herbie, the Love Bug, farted. Swingers, on the other hand, painted a picture of Los Angeles as a vibrant, exciting place to meet weird people and get into trouble. Sure, Vince Vaughn has the showy role; Trent got all the catchphrases and cool-guy close-ups, but there would be no movie without Jon Favreau. If you haven’t read Grantland’s epic oral history of Swingers from last year, read it all right now. When you’re done, come back here. I mean it. Leave!

Hey, welcome back! You look different. Have you lost weight? That oral history was good, right? You learned a lot, didn’t you? What’s most telling about that piece is how integral Favreau was to the production of Swingers. Not only did he write the damn thing, he was the driving force behind getting it financed and sounds like he was practically a codirector. Oh, speaking of directing, Jonny Boy is one of the top directors in Hollywood today.

Maybe you saw a little film called Iron Man? Amos, did you see it? You must not have, if we’re even having this conversation right now.

Of course, we’re not talking about who won Swingers — that’s a wholly different argument (one that, let’s be honest, we’ll probably have by June?). We’re talking about who won life. And to that end, I do respect you coming out of the gate with the money-minting Iron Man franchise — a veritable flying knee to my orbital bone. Unfortunately, I must put you down, much like Ronda Rousey.

Should Jon Favreau get credit for Iron Man? Yes, of course. He should get like 3 percent worth of credit. The rest goes to the lifetime of druggy, smirky loucheness that is Robert Downey Jr. There was no script! It was just RDJ going HAM. And not to be overly unkind, but since then, we’re talking Cowboys & Aliens and Chef. Meanwhile, my guy Vince is juuuuust about to roll into that inevitable Career Resurgence we all saw coming. I don’t know who he’s playing in True Detective, and I don’t caaaaaare. Beneath all those bungled career choices and blooming jowls are the chops, wit, and verve of a king.

Now, if you’ll kindly pay no mind to that man behind the curtain 12 percent Tomatometer.

Schilling: Props to you for laying out my counterargument by invoking Unfinished Business. I expect you will be quite a graceful loser when this is all over. I thank you in advance. As tempting as it is to judge this contest based on future potential, only past performance can be accurately judged. Unfinished Business, a critical and commercial disaster, is like that shit pie that Bryce Dallas Howard ate in The Help.

You thought it was going to be a delicious piece of warm pecan pie, but instead, you got a mouthful of Octavia Spencer’s poop. Not a great analogy, but we’re also not judging my rhetorical flourishes. I’m not on trial here! Vince Vaughn is, and he’s the star of the following turd-flavored pastries:

That’s a Book of Job–level string of bad movies. I hope he snaps this run of disasters and kills it on True Detective, and I think he can. But I look at his résumé since Wedding Crashers and I can’t help but assume that his agent is Sam Hinkie.

No matter how much credit you do or do not want to give Favreau for Iron Man, the dude was a part of one of the seminal action movies of the decade. There would be no Marvel film franchise without his leadership. Robert Downey Jr. would not even be in that movie if it weren’t for Jon Favreau advocating for him. But put aside Iron Man, and Jon Favreau is also the director of Elf, the best Christmas movie of the first decade of the 2000s. That’s two huge, important movies. What was the last Vince Vaughn lead performance since Wedding Crashers that wasn’t an Octavia Spencer dookie tart? I’ll wait!

Real talk, though, the year Iron Man came out, Vince Vaughn starred in Four Christmases.1 If you don’t mind, could you bend over and pick up that mic I just dropped?

Barshad: Here’s the thing about both of our boys: We’re talking about the tragedy of unfulfilled potential. If Swingers were any indication, Vince was going to be our prickly glowing ball of A-list charisma from now until the sun burned out, and Favreau was going to be small-time Woody Allen — the nervy auteur/star for our generation. Now, here’s the difference: For a while, at least, Vince played his part. In the early 2000s, with Old School and Wedding Crashers the alpha and omega, he was our jittery, fast-talking king. This wasn’t a pose: Peak Vince Vaughn could have talked us into anything. Sure, he fell off a cliff. But for a while, man, he had it.

And meanwhile, Favreau could barely be tasked to try. After his directorial debut Made came and went, he went running into the bosom of big Hollywood, hitching his wagon to stars (RDJ, Will Ferrell) that very much weren’t Jon Favreau. And by the time he got back around to his auteur grind, the year was 2014, and the result was Chef. Chef!

I saw Chef on a plane. It was OK. I fell asleep. But after Swingers, this man was supposed to make generation-defining indies. Not. Fucking. Chef.

I know my boy Vince puts up a lot of bricks. But at least he stays shooting. And sure, I wish he’d consult me directly before saying yes to some of this dreck. But with True Detective, I feel it in my bones: He’ll yet find his way to the rack once again.

Schilling: If Chef is your trump card, then we might as well just wrap this up now. Chef sits at 86 percent on Rotten Tomatoes. It was a low-budget indie comedy that made $45 million at the worldwide box office, per Box Office Mojo. Just in the United States, it made $31 million, which is more than the domestic gross of Vince’s last movie, Delivery Man.

The perfect way to settle this is to give these guys the fantasy team test. If you are putting together a feature film, and you can have only one or the other, would you rather have Jon Favreau directing your movie or Vince Vaughn starring in it? If this were 2006, I would say Vince Vaughn, but it’s not. It’s 2015 and Unfinished Business was Vince’s fifth bomb in a row. There’s no metric available that points to Vince Vaughn being a better choice in this battle. I win, right? Right?

Here’s the thing: In 2015, Jon Favreau doesn’t have a thing. If he’s directing a movie — that means what, exactly? In 2015, Vince Vaughn still has a thing. It’s a battered, bruised, and broken thing … but it’s still a thing. And that thing is the insouciant charm of the cad with a heart of gold. The Little Giants protocol applies here: Yes, 99 times out of a hundred, these days, Vince Vaughn isn’t bringing us the hot sauce. But all it takes is that one time.

Schilling: Your appeals to nostalgia and sentimentality almost worked on me. If you had just mentioned The Lost World: Jurassic Park2 I might have caved. If you won’t listen to logic and reason, then maybe you’ll listen … to your heart. You see, young man, Vince Vaughn doesn’t need us to keep coddling him. He needs tough love.

Amos, I hope you won’t mind if I speak directly to Vince here.

I realize that times are tough for you right now. I think more people contracted ebola in New York last year than saw Unfinished Business. This might not be what you want to hear, but it’s what you need to hear.

You’re money. You’re so money, and you don’t even know it.

Believe in yourself, man! You’re not just hurting us, you’re hurting yourself! Within you is the man we loved. Can you find him? Can you see him, Vince? He’s in there. He’s begging to get out. Listen, Vince, I know it’s hard. I’ve been there myself. Not for this long or anything, but I’ve been there. The best thing you can do is just get back out there. You’re an aging leading man in Hollywood, but I bet that somewhere inside of you there is a very, very special dream.

Guest judge Mark Lisanti: This is a tough one, guys. Trent vs. Mikey. Trent and Mikey should never fight. They should be perfect best friends forever, haunting Swing Night at the Derby and The Room, unless they’re at The Dresden, or maybe hitting up a party in the Hills, stammering about their K-cars and tearing up digits just because they can, this place is dead anyway. But enough about when our boys were perfect. The Upper Hand is about right now.

If we’d done this on Friday, when Unfinished Business was just tracking like a shit-bomb about to impact Vaughn’s career, instead of standing at the edge of the smoking crater filled with smoldering Vince parts and trying not to pass out from the methane fumes, this might have been a tougher call. But Business did about a third of the box office of Chappie, which began and ended its brief cinematic life a punch line. We can’t ignore that string of flops Vaughn is trailing, even if the next time we’re going to see Jonny Favs is behind the camera of The Jungle Book next year.

True Detective, please save our old pal Vince from himself. Because right now, Jon Favreau has the Upper Hand.