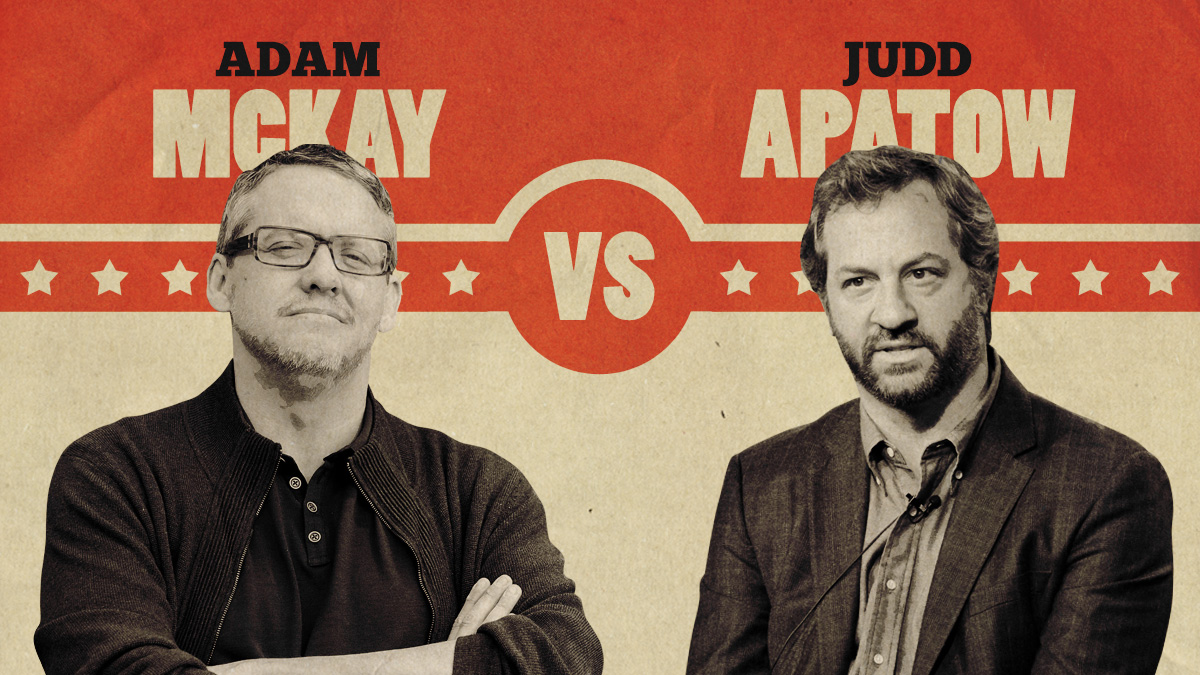 The Upper Hand is where Grantland staffers pit unsuspecting entertainers against one another to determine who currently has a greater grip on the hearts and minds of America. It’s a long way of saying X > Y. It may seem reductive, or even unnecessarily competitive, to put our gentle creators into a squared circle, but it’s a useful exercise in seeing who is doing things right, who is doing things wrong, who is doing things differently, and, of course, who is winning. At the end, a guest judge will hand down a verdict. Today’s debaters are Corban Goble, on the side of Adam McKay, and Amos Barshad, arguing the case for Judd Apatow. Judging will be Chris Ryan.

Corban Goble: Today’s Upper Hand features the two people who have, for better and for worse, dictated the American Film Comedy for the last 10 years — Judd Apatow and Adam McKay. Both have had undeniable zeitgeist-wheelie-popping hits (Apatow’s Superbad, McKay’s Anchorman) and misfires. While they’ve overlapped on projects a great deal (Apatow produced Anchorman and McKay directed it, for example), their filmmaking styles1 have spun off in fairly defined ways. We’re here to focus on the works that each steered. They’d probably be astonished we’re pitting them against one another, since for all I know they have a good relationship, but SCREW FRIENDSHIP. This is UPPER HAND.

When you’re watching the best of McKay’s work, like Step Brothers, it feels easy to invoke the word “masterpiece.”

It’s a movie that flutters majestically on this odd, singular pulse — all the tensions between characters are stretched to a volcanic extreme. For me, Apatow’s bro-tacular oeuvre is overrated and his movies always feel like they are 12 hours long. I also feel like they always reach for an emotional payoff that feels forced. Meanwhile, I watch Step Brothers on the reg. Amos, you’re an Apatow stan. What do you have to say for yourself?

Amos Barshad: I know that today we’re supposed to be enemy combatants, but I feel like, ultimately, in some small way, we are out here repping the same Smart Tech. THAT SAID — when I remove the blade I keep in my boot from its sheath, I cannot return it until it has spilled bloooood.

It’s a funny time to be discussing who has the upper hand between McKay and Apatow, as they’re both suffering a marked depletion of Hand. They’re not exactly at Costanza-level lows, but are still significantly down from their peaks, when their squads effectively ran Comedy Hollywood.

McKay was blazing from 2004’s Anchorman to 2008’s Step Brothers (his greatest work, in terms of pure art — that is a strange and discomfiting movie, and it cuts deep). 2010 brought The Other Guys, which cleaned up at the box office (and had Mark Wahlberg in it, which automatically means it was a force of good for the universe), but that flick was popping about zero wheelies. McKay made his rep by minting bro-quotables; simply enough, The Other Guys didn’t touch the culture.

By the ’10s, McKay and Will Ferrell were basically publicly begging Paramount to let ’em do Anchorman 2. That made money, too, but WHO CARES? This is the irrational emotional hellscape of Upper Hand, not the Paramount shareholders meeting. I’m gonna say it: That whole Anchorman 2 thing was a creative nadir. It was, as the kids say, “not a good look”; it was, as the kids say, “thirsty.”

Apatow’s own streak of dominance kicked off with 2005’s The 40-Year-Old Virgin, continued through 2007’s Knocked Up (which he also directed), and ran through the various properties he produced for his Freaks and Geeks minions, most notably Forgetting Sarah Marshall, Pineapple Express, and — praise the heavens — Superbad. That was his moment. As the New York Times pointed out in a May 2007 profile, “Over the next year and a half, an Apatow-connected comedy will hit multiplexes at a rate of about one every three months.”

Go ahead and add all of those various properties up; go ahead and weigh them against McKay’s output. Men lie. Women lie. Buckets don’t.

In 2009, with Funny People, Apatow commercially skidded out. Which is bullshit. Because it was near-peak Adam Sandler, and it was a true and painful look at the demoralizing nature of fame, and it had this.

In 2011, This Is 40 was released, and the backlash started for real. That movie … that movie was bad and tone-deaf. No way am I defending that thing. Upper Hand partisanship must have its limits.

Now Apatow’s doing Amy Schumer’s Trainwreck, which could be great — Schumer’s a force; also, I think the love interest is LeBron — but still feels like something he’d have pawned off on his protégés back in his more fertile times. Meanwhile, McKay’s doing punch-up work on Ant-Man.

Goble: Ant-Man is gonna be fire. McKay’s universe has its own, self-contained silliness, but who says that silliness can’t be touching too? Kenny Powers2 is, like, the world’s biggest dick but somehow you feel for him — the character is so separated from reality that his whole life becomes this perverse performance.

Most Apatow-directed films feel like they’re two separate movies. There’s the one where all the funny bits are happening, and then there’s the slow-moving redemption tale, where Seth Rogen figures out what it means to be an adult. McKay might miss with his characters from time to time — Ricky Bobby, Anchorman 2 — but because he doesn’t reach for the heavy-handed emotional explorations, his style is simpler and doesn’t pretend to moralize. It’s no mistake that Ferrell’s best performances have come in McKay movies, save for Old School. Also, McKay doesn’t cast his family in every movie, which creates this whole meta-vibe that makes me feel uncomfortable.

Apatow gets this “auteur” rep — a distinction only reinforced by involvement with prestige series like Girls — that feels undeserved. I’m not saying Adam McKay is the second coming of Mel Brooks, but he’s closer to that than Apatow is.

Barshad: I love Kenny Powers more than I love most of my extended family, but McKay gets only partial credit — that’s Danny McBride and Jody Hill’s bit of genius. Also, I’ve never seen Casablanca but I have seen Undeclared!

I know Apatow’s flawed, but I feel like when it comes to bros with heart, he’s the rightfully declared king. When it’s off, it’s awful. But when it’s on, it’s McLovin: a cliché — sex-crazed high school movie virgin — given depth and humanity.

When that young man oh so briefly did sex for the first time, it was like a nation rising at once. McKay’s a prodigious joke machine. I respect him in the same way I’d respect a particularly well-crafted yet heartless automaton. But I think ultimately what I’m trying to say is “I play real sports. I’m not trying to be the best at exercising. [Mumbles under breath.] Fuck this guy.”

Goble: When all is said and done, I think having both Apatow and McKay serve as avatars for the whole damn modern comedy scene is, um, problematic, but at least McKay doesn’t try to shoehorn the sap. His films are more ridiculous and yet somehow more thoughtful.

In conclusion, Ant-Man surely will be the comic panacea that washes over pop culture at large. Ant-Man, in theaters July 17.

Barshad: Oh hell yes. Wish I could just hibernate until then.

One more thing: shout-out to Apatow for getting bored of working with dudes. He eventually helped shepherd along Girls and Bridesmaids. Schumer’s up next. And you can draw the line between those works and our new cultural overlords — Broad City’s Abbi and Ilana. In other words, why does your boy McKay hate women so much?!!

Barshad: Also, I know you’ve been waiting for me to explain what “walking by Mexican restaurant” means ever since I left that very mysterious phrase as a note in the shared Google Doc we used to write this (the very same Google Doc in which I hastily misspelled your name as “Corbab,” which is wildly irrelevant but still needs to be known). OK, here goes: A few summers ago I was sitting at the outdoor patio of a Mexican restaurant in the West Village when the entire Apatow–Leslie Mann unit walked by. Mann and her two daughters were adorably palling around, and Apatow adorably ran ahead of them without stopping their stride to snap a pic of them all happily mid-stroll. It was adorable, bro.

In conclusion — Live. Die. Repeat. I stand with Judd.

Guest Judge Chris Ryan: Two men enter, one man leaves. This is a tough one, not just because the lawyers in the case are basically the Daniel Kaffee and Jack Ross of arguing about comedy directors. When you’re talking about McKay and Apatow, you’re talking about chefs with a lot of pots on the stove. Which ones are they stirring? Which ones are they merely keeping an eye on? And which [takes off aviators] are they simply taking credit for? We have an issue of authorship. This obviously comes up with Eastbound, something that I am comfortable saying comes from the minds of Hill and McBride, and any number of Apatow-brand products that seem like the singular works of their writers or directors (Superbad, Girls).

On the whole, I think Apatow has probably had a hand in more good stuff than McKay. But as filmmakers, I’m siding with Corban here. McKay largely shrugs off the need to put a bow on things, to teach us any lessons. His movies are, to quote Corban, “volcanic extremes.” They’ve got the soul of improv comedy, where basic scenarios are pushed to the outer limits. Apatow, increasingly, seems to be flirting with dramedy. And his movies increasingly play like that word sounds. Wrong.

Judging an Upper Hand between two contestants who are coming off what are largely viewed as missteps is hard. But within the vacuum of this argument between Corban and Amos, I gotta go with McKay.

Songs of the Week: Chromatics, Schoolboy Q, Scooter Island, and 'Ye All Day