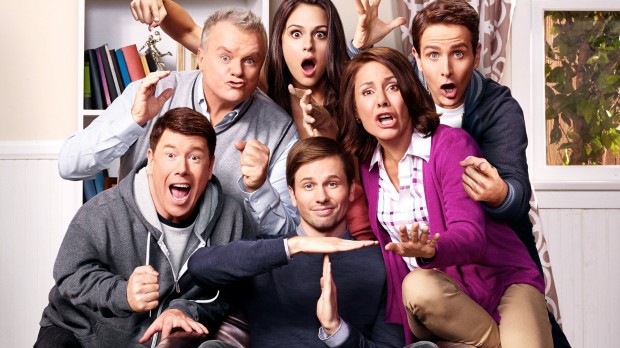 For the past six years (and 11 of the past 12), CBS has been the most watched network in the United States of America. It’s been a few months since Grantland’s Rembert Browne has hazed himself, so this week he has been investigating this network by watching as much of CBS’s offerings as he can. He’s never seen most of these shows, watches none of them regularly, and has not even heard of a few of them. Each day, he has been reporting back with his findings.

This is the moment I’ve been waiting for. And not just because it’s the last night, but because it’s the night of laughs. CBS’s Thursday-night comedy block. And if there’s one thing that puzzles many a non-homeowning American, it’s the unparalleled success of the CBS comedies.

Unlike other nights, I knew going in that I would not be watching the entire block. Because I was already focused on one show. It wasn’t The Big Bang Theory, because I do not like The Big Bang Theory. And it wasn’t Two and a Half Men, because I also do not like Two and a Half Men. And it’s not Mom, either. Because no matter the high marks it’s received, Mom is a dumb name for a television show. And because of that, I would not be watching it.

Since CBS Week began, I have had it in my mind to wrap up the series with The McCarthys.

Once you find out there’s a network television show starring John Ritter’s son, Jackie from Roseanne, and Joey McIntyre, there’s no way to just brush that off. You must investigate. And then Wikipedia told me about the show:

The series revolves around the McCarthys, a close-knit working class Boston clan whose sports legacy runs deep in the family. But when outspoken father Arthur, a dedicated basketball coach for the fictional Cardinal Hennigan High School, decides to take his athletically challenged—and openly gay—son Ronny under his wing as his new assistant, the other siblings (who are more sports passionate) start crying foul over their dad’s choice.

Tell me more about this “Ronny,” Wikipedia:

Ronny McCarthy, a 29-year-old openly gay man and guidance counselor who must choose between a great opportunity to move to Rhode Island and an offer to work under his father as an assistant high school basketball coach.

This is too good. Just for kicks, what’s the mom like?

Marjorie McCarthy, a mother of four children. Her favorite is Ronny, with whom she watches The Good Wife.

Incredible. CBS is out here in these prime-time streets, promoting CBS shows in other CBS shows. I can’t wait.

Also, completely apropos of nothing, here’s Joey McIntyre on The Talk (yes, of course, another CBS show), doing the NKOTB “You Got It (The Right Stuff)” dance, much to the delight of Laurie Metcalf (in blue):

Just like that, in a wild turn of events, The McCarthys had become my favorite show on television, and I hadn’t even seen it.

On Thursday, I went to the CBS website to double-check the evening’s schedule. It was a moment I won’t soon forget. 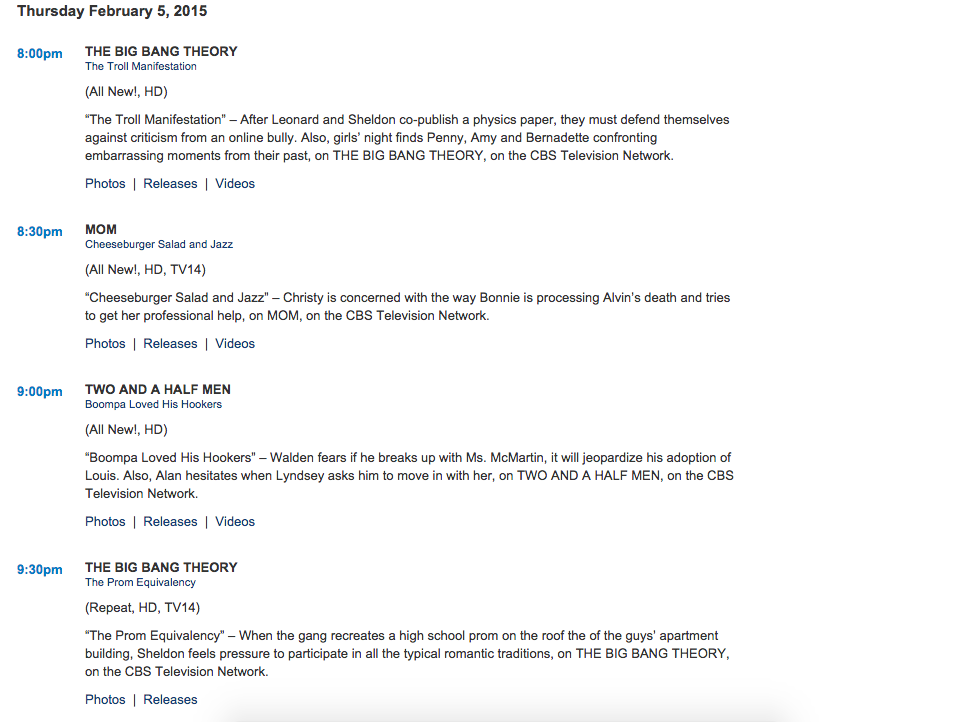 What a terrible, cold, ruthless world this is. What could have possibly happened in 48 hours? Assuming 146 people must have tuned in to last week’s McCarthys, I checked the ratings. 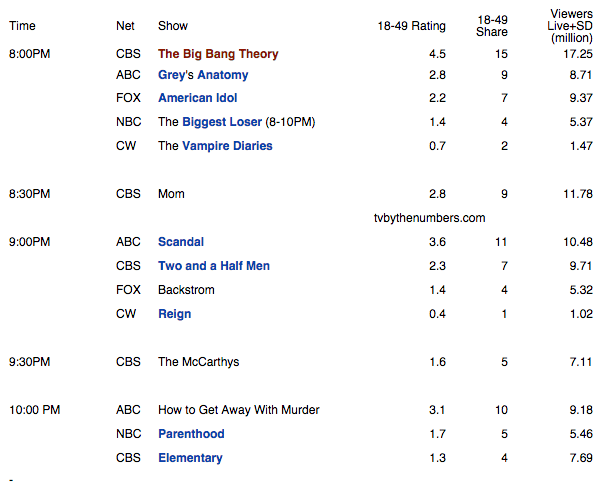 More than 7 million people watched last week’s The McCarthys. That’s 10 million more than Girls. But, as is becoming increasingly clear, CBS does not play. And, according to reports about the show’s removal, much of it had to do with the negative effect it was having on the following show, Elementary. Which is why Big Bang Theory reruns will be replacing The McCarthys.

You could stick The Big Bang Theory before a show about #longreads and it would last three seasons. It’s because The Big Bang Theory is the Facebook algorithm of television, the ultimate tool to keep whatever you want popping to continue to pop, regardless if it’s good or bad.

I was upset. Between cursing out random fictional characters in Elementary and making Jim Parsons voodoo dolls, I was pissed. Because I’d been cheated.

For two hours, I looked for the episode online. It was nowhere to be found. So I resorted to settling for a preview of the episode:

Things were worse than ever. So bad, in fact, I considered my last resort: watching Mom.

But I couldn’t. The McCarthys had given me so much anticipatory joy over the past week that I had to honor it somehow. I had to.

Finally, it surfaced. A preview. Ten seconds. You would have thought I’d hit the lottery I was so excited.

CBS will undoubtedly get that preview removed in its quest to erase The McCarthys from recorded history. (See CBS’s slogan: “Seven million viewers? What do we look like, NBC and ABC and The CW and Fox combined?”) But let this be the final record of the final seconds of television’s seminal sitcom that I never got a chance to see, The McCarthys. 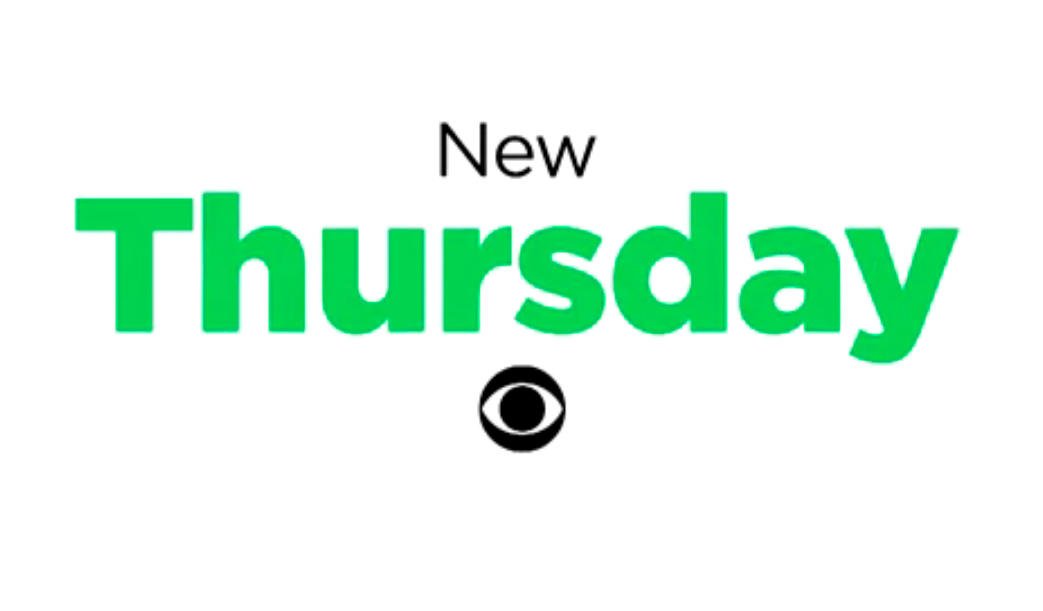 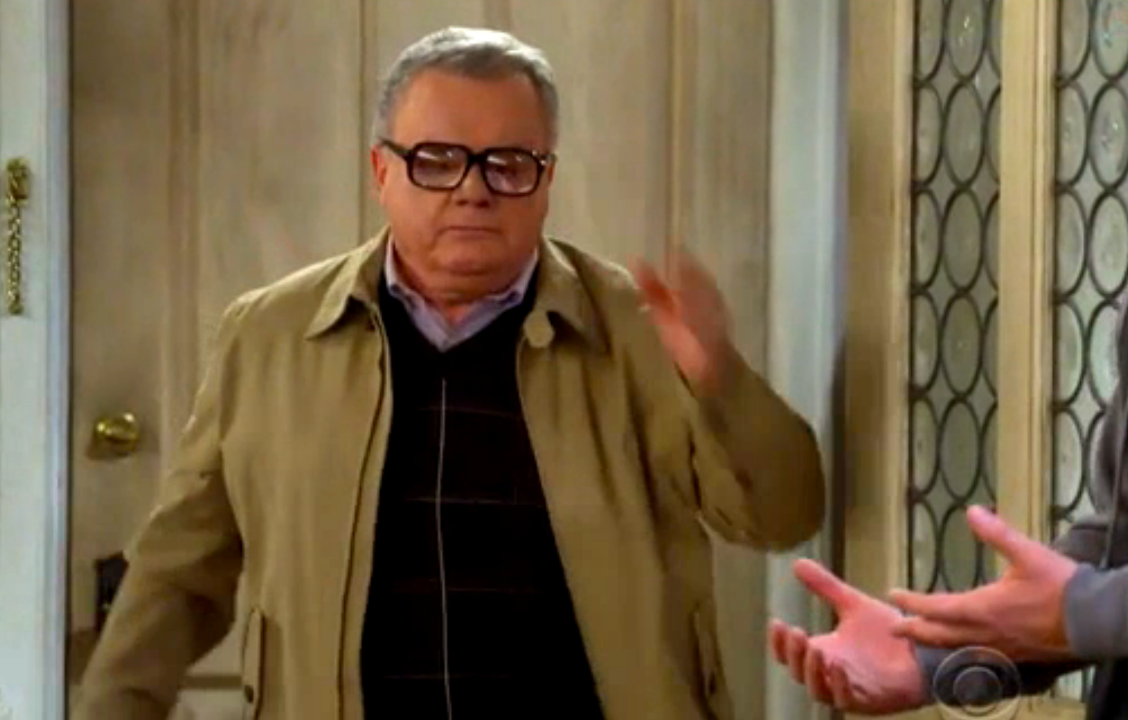 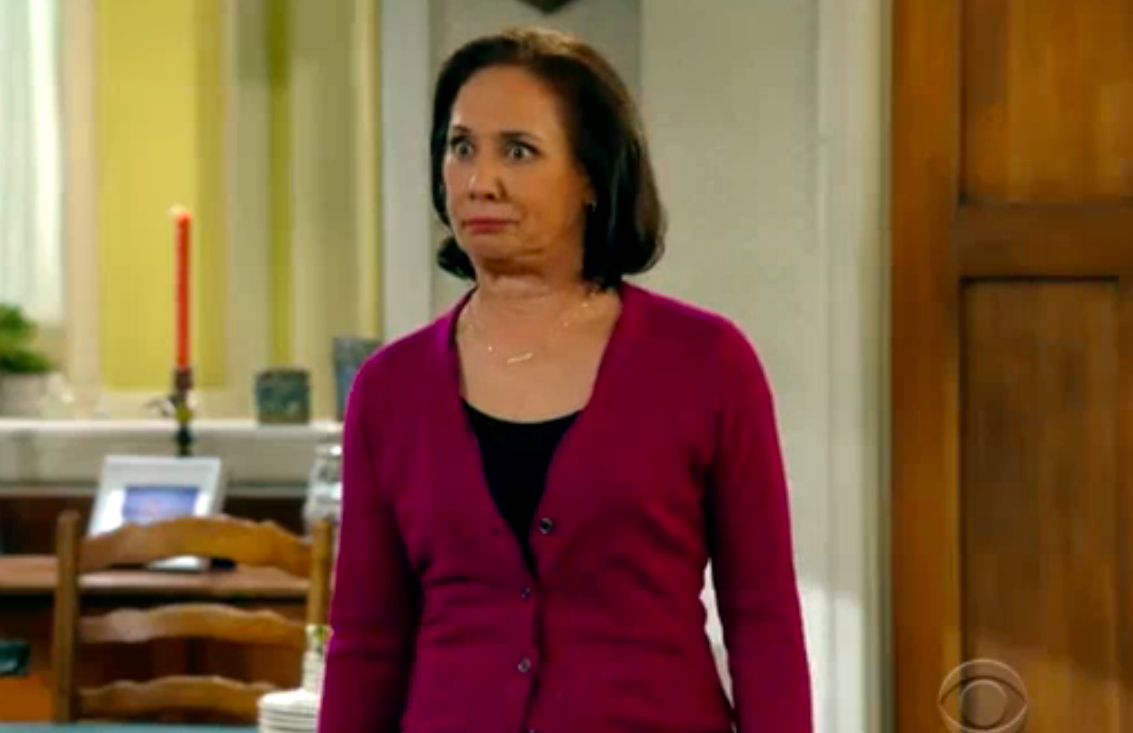 Man With Glasses: I look like Elton John’s grandpa. 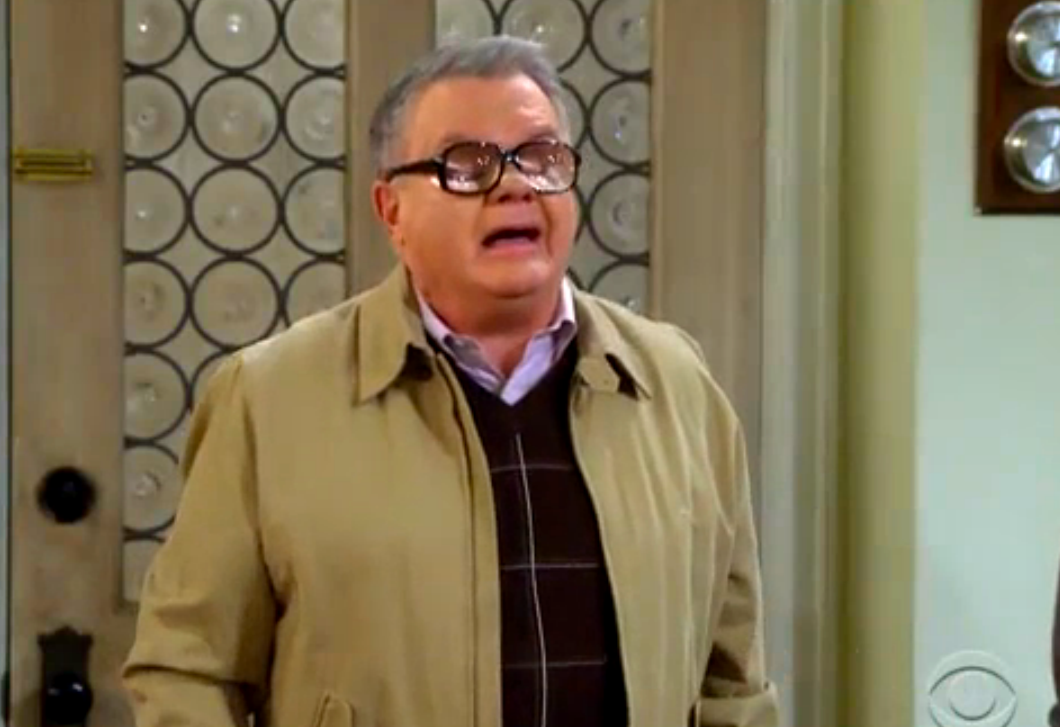 Joey McIntyre: More like that old guy from Up. 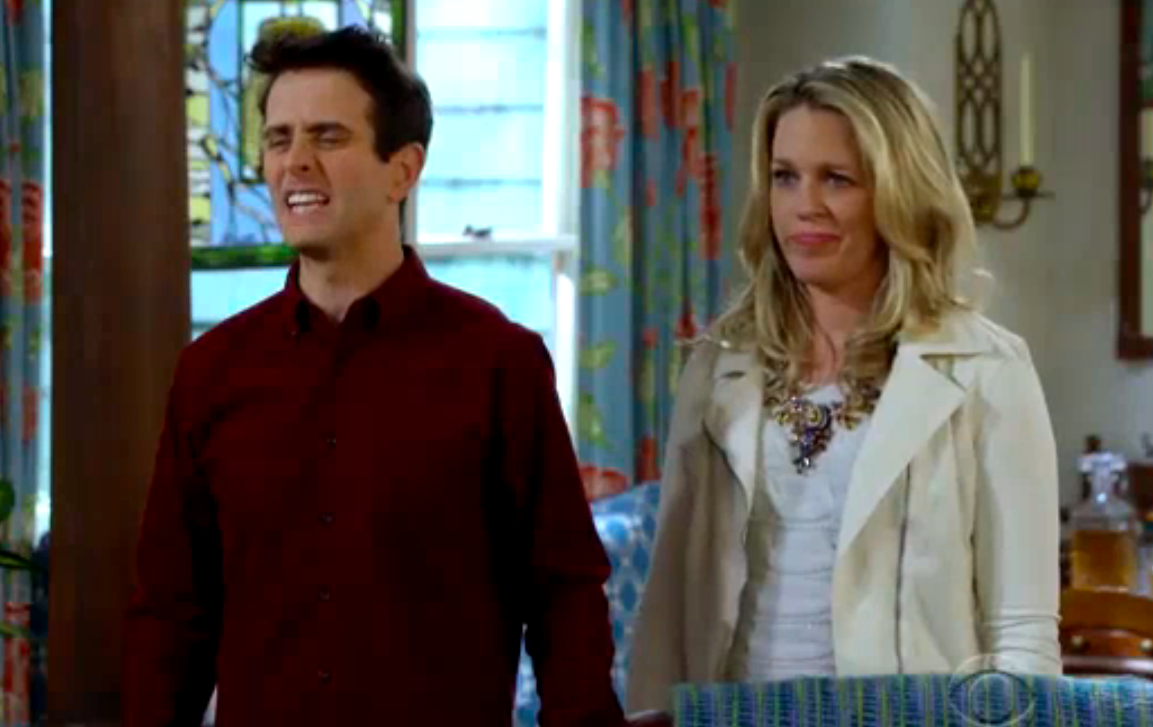 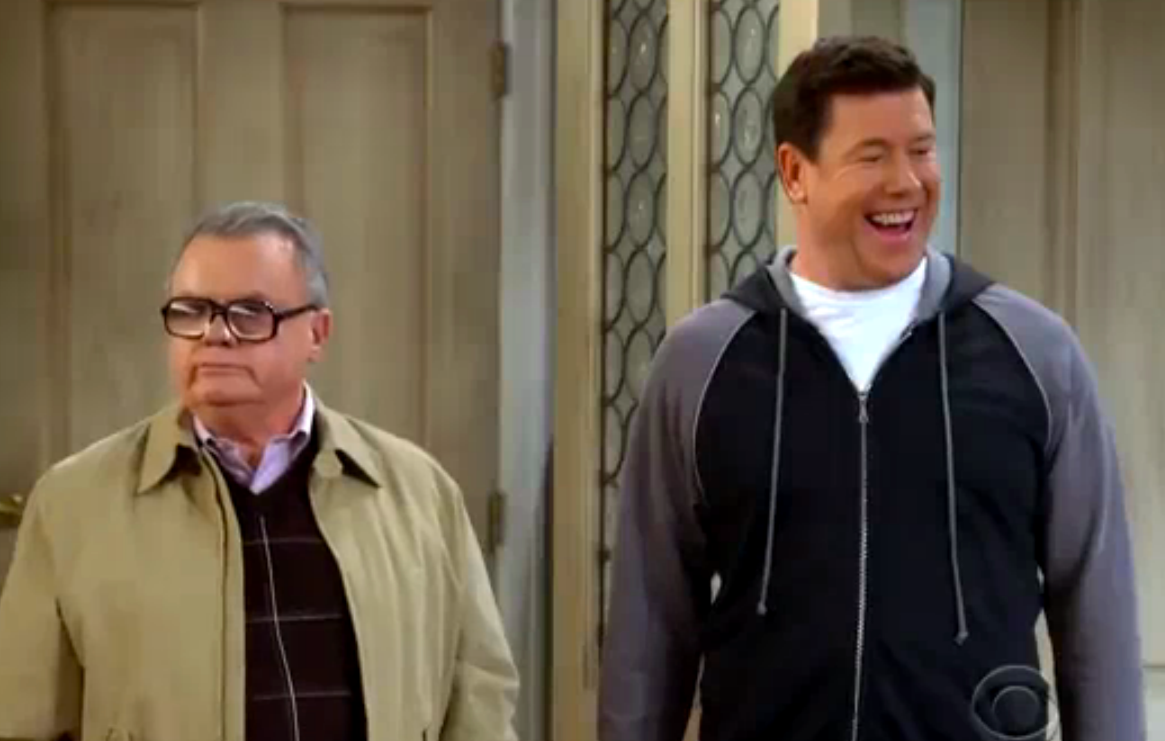 Voice-over: It’s a new McCarthys. Thursday after Two and a Half Men. 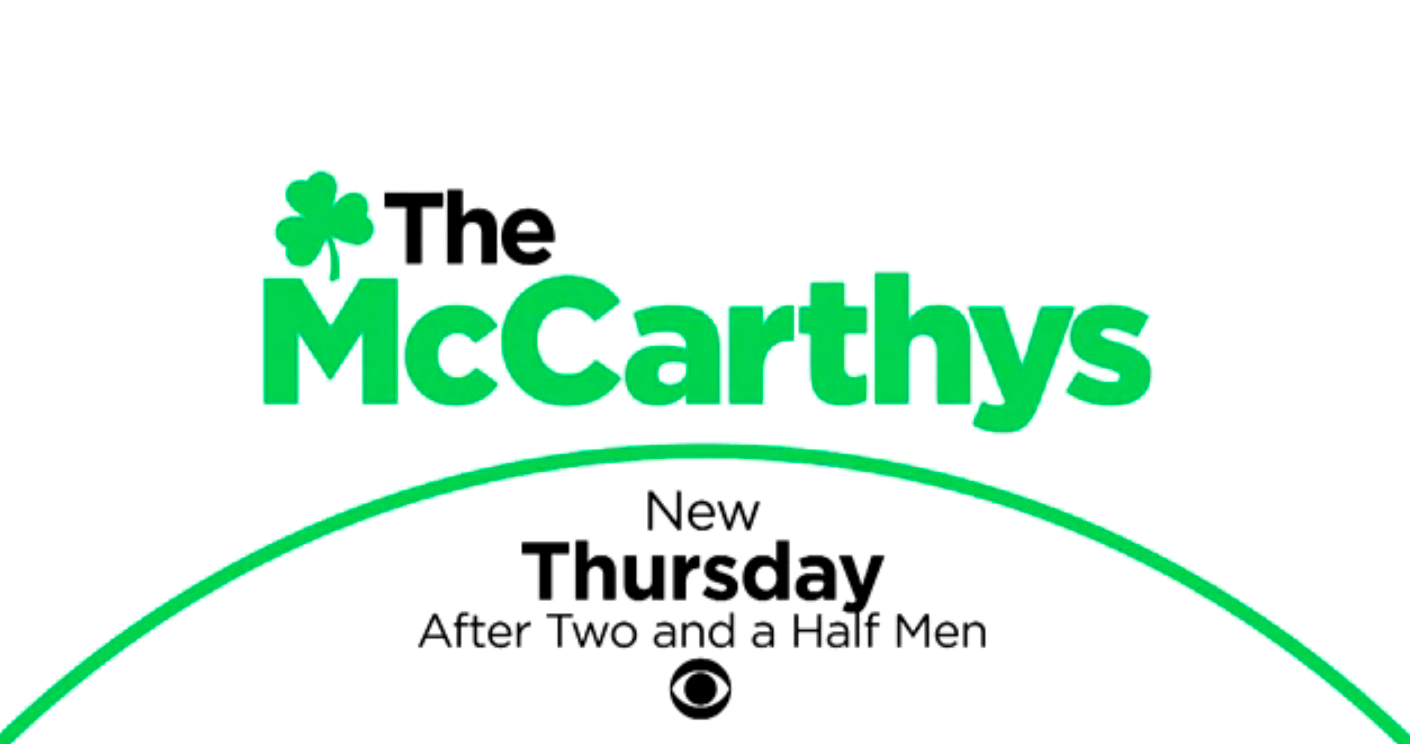 YOU CAN’T JUST TELL PEOPLE SOMETHING IS HAPPENING ON THURSDAY AFTER TWO AND A HALF MEN AND THEN TAKE IT BACK.

WHAT KIND OF MONSTERS ARE YOU? 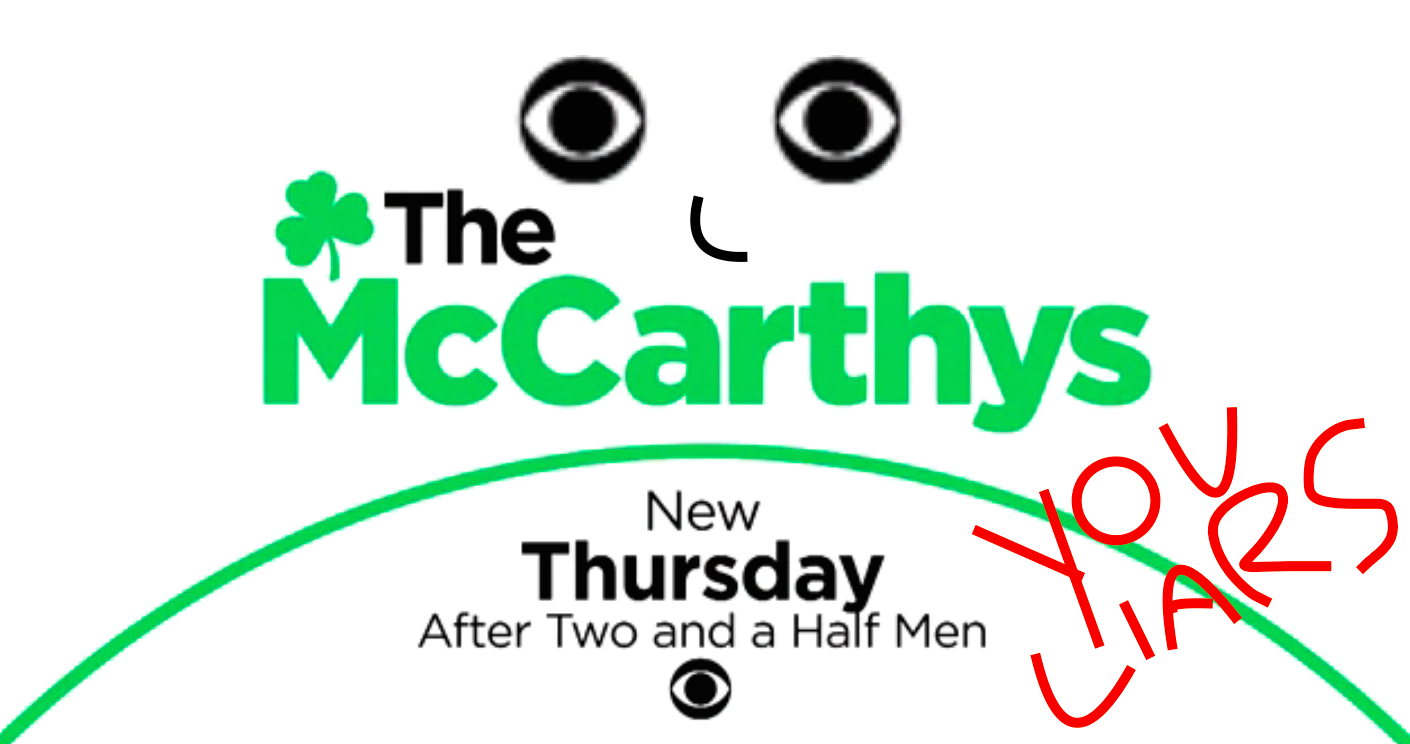 This has been an enlightening week, this CBS Week, filled with highs and lows. My knowledge and respect for CBS as a network and Mob syndicate has increased to a level I never thought I’d reach. It’s not perfect (Person of Interest is damn near close), and much of it isn’t my ideal programming (throw away all the non–Mike & Molly comedies and replace them with Person of Interest), but I get it. I completely get it.

But what you CBS people did to The McCarthys, I will never forgive.

And I will not forget.

You should be ashamed.

You lost it for yourself.

Filed Under: TV, CBS Week Viewing Diary, CBS, the mccarthys, Two and a Half Men, the big bang theory

That Was a Thing: Montell Jordan’s ‘This Is How We Do It’