CBS Week Viewing Diary, Day 4: Watching ‘Criminal Minds,’ ‘Stalker,’ and ‘The Mentalist’ at the Same Time, Like a Crazy Person 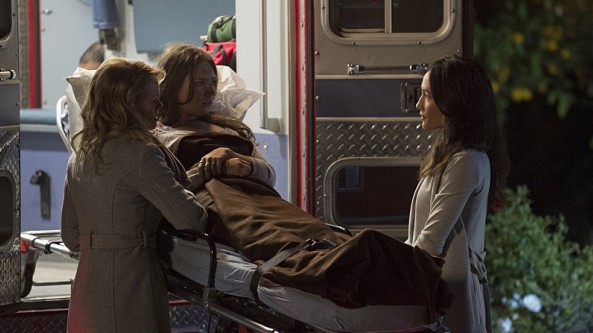 Sometimes you have to just wake up, drink a few coffees, and decide to change the way blogs are blogged.

On Wednesday night, there were new episodes of Criminal Minds, Stalker, and The Mentalist. I did not watch any of these shows Wednesday night. Thursday morning, however, I did watch them. At once. On one monitor. With the volume at 100 percent on all three.

There was no way to truly know how this experiment would go. But sometimes you just have to be brave, go for it, and hope for the best. It’s like what Malcolm X said: We didn’t land on Plymouth Rock. PLYMOUTH ROCK LANDED ON US. 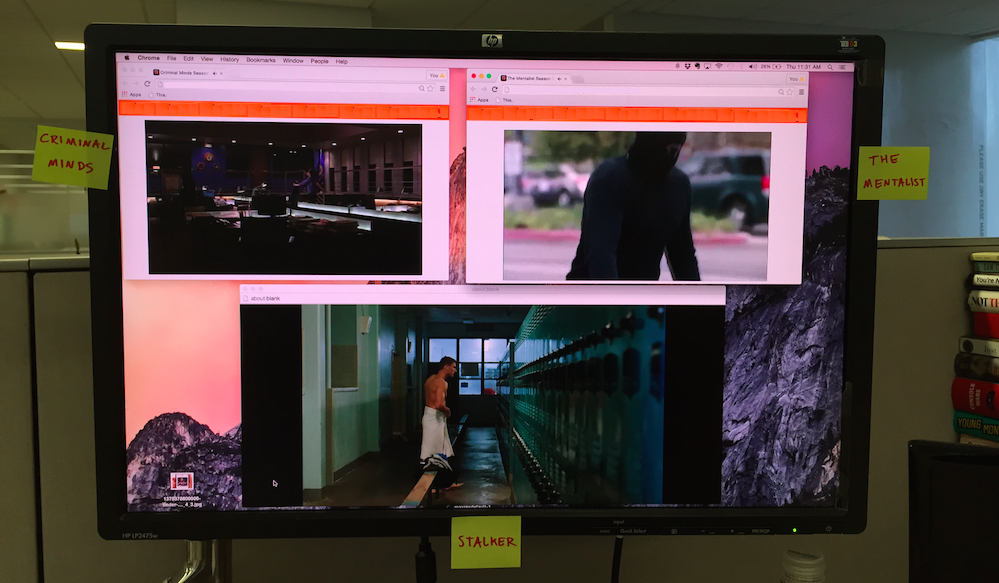 The shows weren’t exactly the same length of time (Criminal Minds also had a “Previously on Criminal Minds” segment), but all three shows (barring any tragic buffering issues) would presumably hit their climactic scenes around the same time, somewhere around that 32- to 36-minute sweet spot.

There was no way this could go wrong.

So there’s a robbery on The Mentalist. You know, The Mentalist, the one with the Australian psychic who doesn’t work for the crime-stoppers, but is a “consultant” on crimes exactly once a week. Anyway, the robbery is of an armored truck, and there had been a ton of cash in that truck.

And then on Stalker, some guy gets a text that says “hate you and hope you die.” And then my greatest fear comes true: He gets trapped under the bleachers and they begin to automatically fold inward, crushing him dead if he doesn’t get out. But he slides out just before death via text and bleachers.

This first scene makes sense, because apparently Stalker is a show about stalkers.

Criminal Minds is the only show I’ve seen of the three. It’s a good show, one that focuses on figuring out the motives and behaviors of the criminal instead of just the crime. I also know there’s a word they say a lot about the criminal (“unsub”1) and that Shemar Moore calls one of the women “Baby Girl” with the frequency of a comma.

The episode begins with a bomb going off in a coffee shop. And then the Criminal Minds team meets in a room, where we see all of the characters. 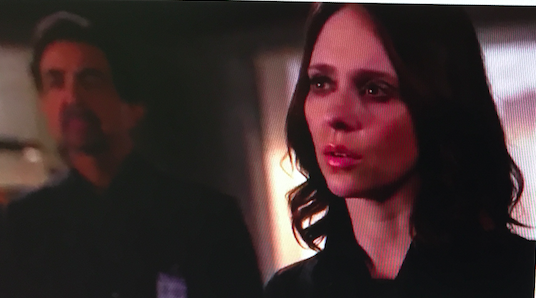 WHY WAS I NOT MADE AWARE– 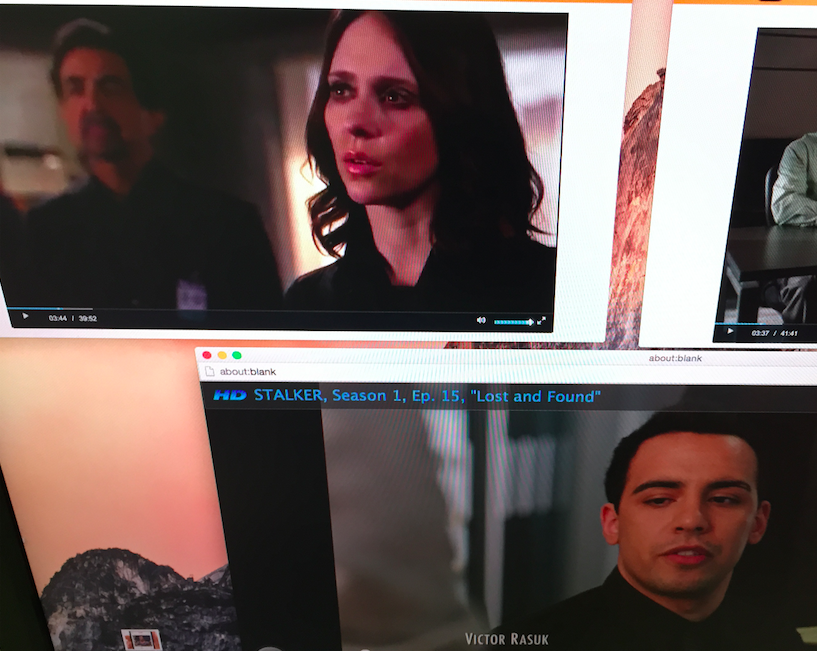 Shut up. Just everyone shut up. What is going on.

There’s no way to expect that CBS Week is the place where you learn how most of the How to Make It in America cast pays their rent. First Domingo and Kappo on Scorpion and now Cam on Stalker.

And right below Jennifer Love Hewitt. This is officially the only way television should be viewed. What I would give to see Cam just talk to Love Hewitt, maybe go on that super cute first police procedural date, perhaps move in together a year later, she invests in Crisp, and then it all goes south and they never talk again.

What I would give.

Also, this is less dramatic than Jennifer and Cam, but look at these three, just gearing up to save yet another day. 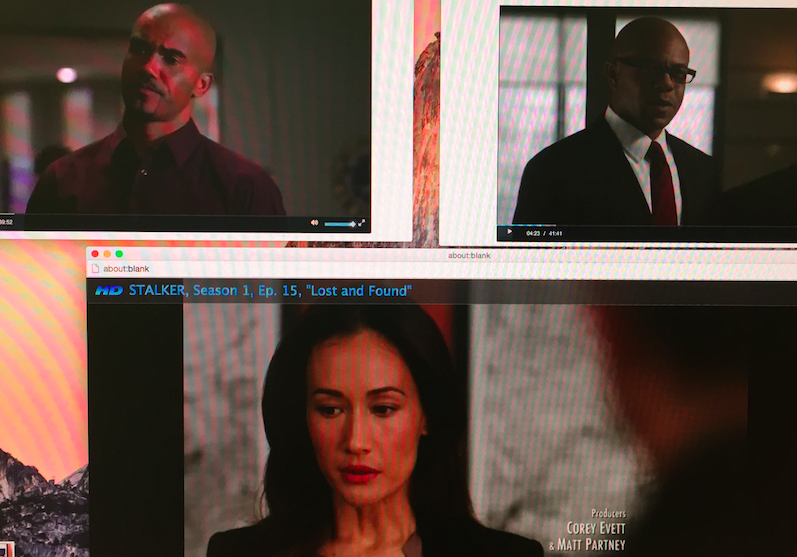 Every time someone’s like, “If you could have anyone over for dinner, who would it be?,” my answer’s always Edison, Banneker, Shemar Moore, Rockmond Dunbar, and Maggie Q. What a treat this is for me.

The Criminal Minds team just hopped into their private plane to Indianapolis and then some guy in The Mentalist asked Rockmond for dating tips.

One thing to note: Watching all three at once, it’s completely impossible to figure out which generic police procedural music is coming from which police procedural. I haven’t the slightest clue.

On Stalker, it looks like the guy who almost died was involved with the person who tried to kill him in the bleachers. But then that gets complicated, because we learn that the text was from a student and he is a teacher. He’s denying anything happened, and then Maggie Q begins to interrogate. He’s backpedaling a bit, but then looks at her and says, “I can see the prejudice in your face.”

She’s amazing. She goes on to interrogate the student, who tells her about a site called Tattler (another imaginary CBS social media property), where students were discussing which teacher they’d have sex with. And she picked this teacher. But she also says nothing ever happened.

AND THEN THERE’S A SHOOTOUT IN A CAFE ON THE MENTALIST.

I can’t lie, I got kind of wrapped up in the SVU-ness of Stalker, and I don’t know what led to that shootout. But the bad guys got away. And they shot a cop. And it’s not looking good. She’s bleeding a good amount, being held by one of her partners.

Right then, this exchange: 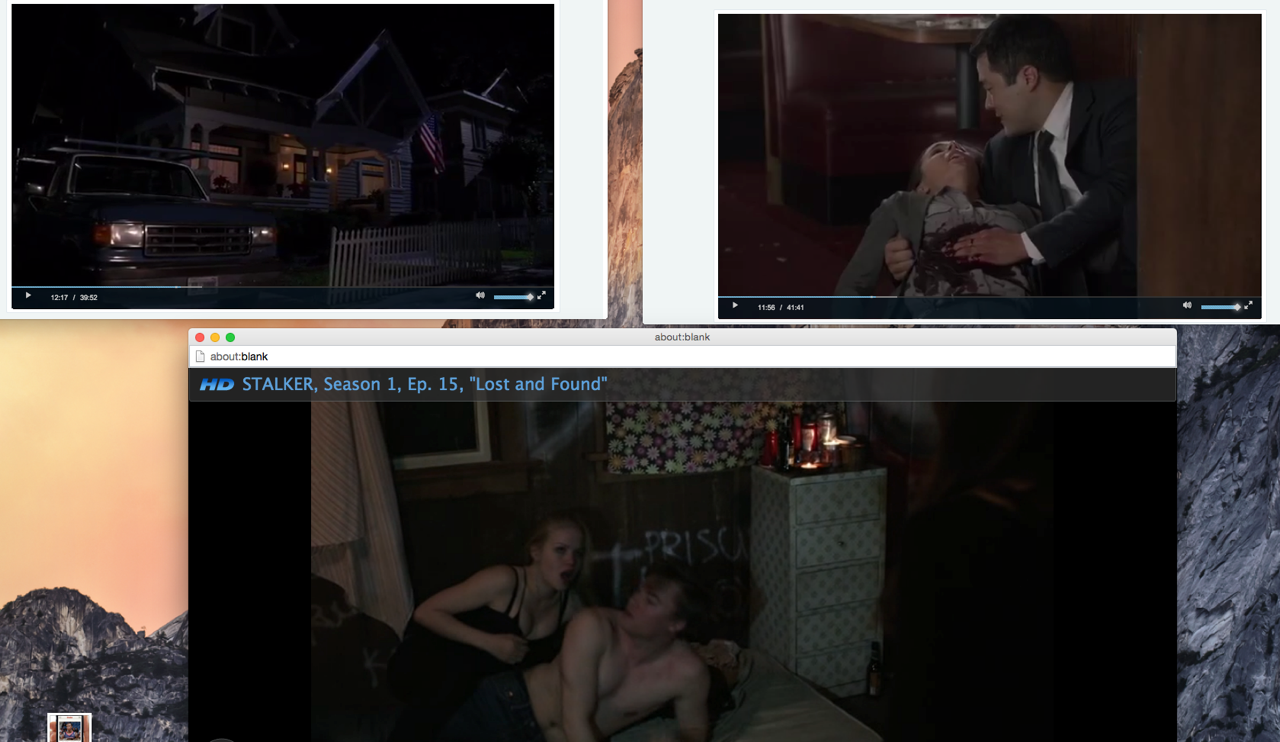 I was so drawn into The Mentalist, I just figured that was coming from The Mentalist. But that made no sense. Why would a dying cop call her partner a “hashtag slut”? Looking to the left at Criminal Minds, there’s absolutely nothing happening. But down at the bottom, in Stalker country, two kids get caught hooking up. And I’m fairly certain the student who is now thought to have hooked up with a teacher walked in on them.

The student gets mad and leaves the high school opium den. But everyone’s giving her dirty looks. Being a teenager is hard.

On The Mentalist, it’s super sad. Everyone’s at the hospital and it looks like that cop is going to die.

AND THEN ANOTHER BOMB IS SET TO GO OFF ON CRIMINAL MINDS.

There’s a guy in a truck and his foot is on the pedal, and apparently, if he lets his foot up, his car explodes. Luckily, Shemar is there (“Shemar” is Italian for “Sex Detonator”), and he disables the bomb. Everyone seems to be extremely happy that no one got hurt.

While Shemar was under the truck, taking care of the bomb, Stalker Cam was at the office, looking for clues on the student’s Facebook page. (CBS, in a stunning move, refers to Facebook as “Facebook.”) 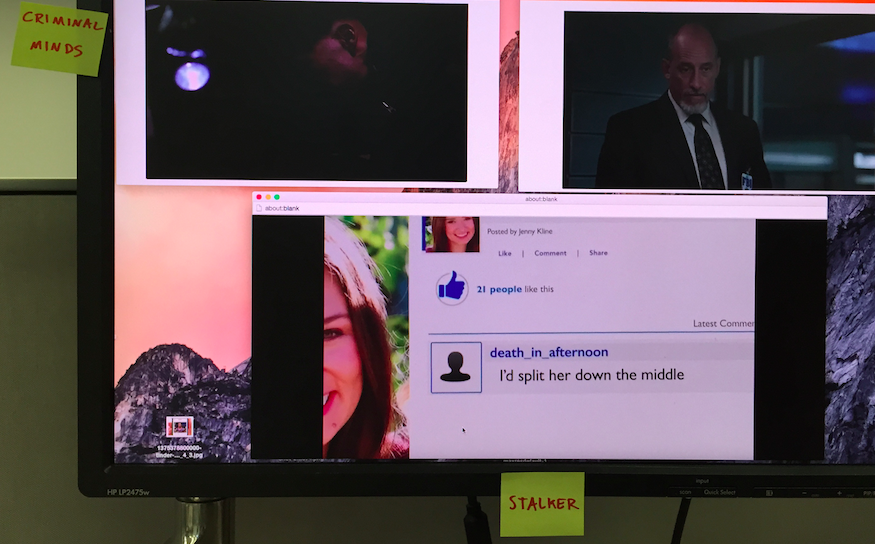 I don’t know if the conclusion was that this post was “violent” or “sexy” or “sexyviolent” or “violentsexy,” but they tracked down the person behind “death_in_afternoon.”

The student they track down is all “Yeah, I said it” but “whatever” and “you’re freaking me out.” Nothing comes of this, and then we return to the student’s  house. (Her name is Jenny.) She’s with her best friend. They’re on their phones and on their laptops. And then a video pops up online.

It’s a sex tape. And apparently, it’s the teacher (who is Coach Baker) and Jenny. Or at least that’s what we’re being led to believe. 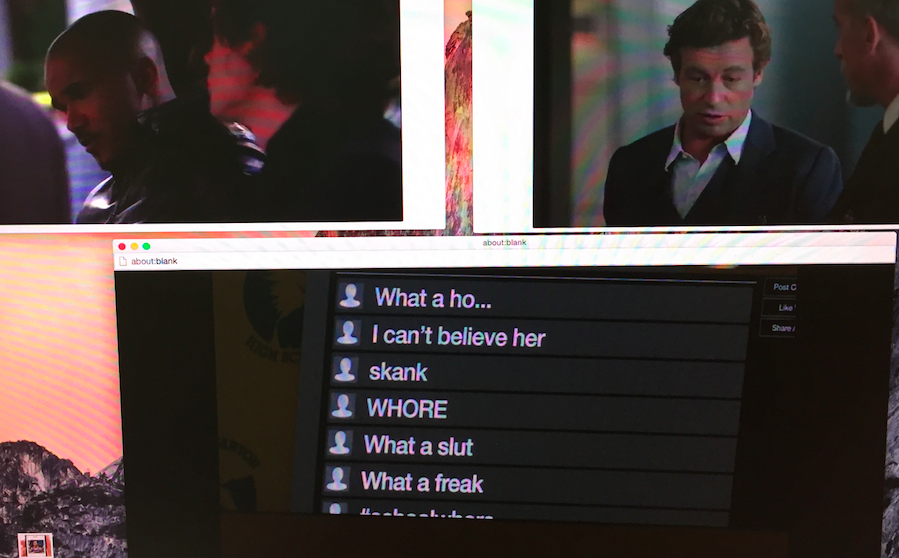 This is pretty bad for Jenny. Especially since Jenny is crying, telling anyone who will listen that it’s not her.

Back in Mentalist land, something’s about to go down outside of a pharmacy. They have a suspect, one of the earlier shooters, and they’re going to sneak up on him. One of the officers tells everyone to turn off their sirens. And then, pretty soon after, a cop car rolls up with its siren on, just ruining everything.

The suspect obviously freaks out, starts shooting, and then takes a hostage and gets away. Again. They’re really bad at this.

Completely forgetting that Criminal Minds exists, because there’s no sexting or hostages, suddenly it’s clear I missed something big. Because now the man they saved from the car bomb is being questioned for murder. And then he admits to bombing the coffee shop in the beginning, along with other murders. Which is what happens when Love Hewitt questions you, because she is intense and has a new haircut and is very good at her job.

But again, I don’t know how we got to that point.

The Criminal Minds team believes him, but thinks it’s bigger than that. And that there’s another UNSUB. So they keep digging.

Jenny from Stalker is trying to get her mom to move the family, because her life here is over. They argue and she leaves the house and gets in the car to drive away. Right then, a seemingly drunk Coach Baker shows up, bangs on the car door, shatters the car window, asks, “WHAT DID YOU SAY TO THEM?” and attempts to break into the car. Luckily, she drives off. Following that, one of the Stalker cops, says to Maggie Q:

Coach Baker got drunk last night, showed up at Jenny’s house, and went after her.

So yes, he was drunk. Just wanted to make sure it was true that the coach got drunk and attacked a student. Just making sure.

We get a glimpse into hostage trap house, where the hostage takers are beginning to bicker among themselves, because they’re country and that’s what country criminals do, they argue and foil their own plans.

AND THEN, ON CRIMINAL MINDS, THE GUY WHO JUST ADMITTED TO KILLING EVERYONE IS GETTING THE KEY TO THE CITY FROM THE MAYOR. 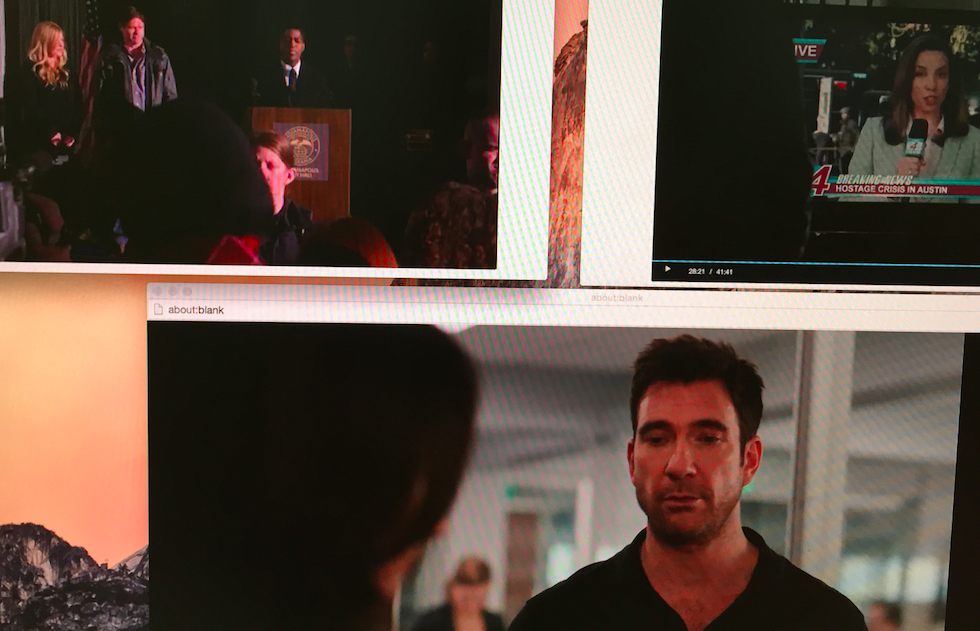 I don’t know. I’m lost and I genuinely don’t think I will ever be found.

It’s about 33 minutes in and, like clockwork, all three shows are climaxing together. The cyberbullying is getting out of control on Stalker, Simon Baker just traded himself in for the safe release of a hostage on The Mentalist, and a decoy bomb leads them to the real second bomber on Criminal Minds.

They negotiate with the bomber guy and, for some reason, he turns himself in. Why, I have no idea and I’ll never know. The Mentalist cops raid the hostage area and shoot all the hostage takers, ending the standoff.

But then there’s Stalker. Oh, Stalker. Jenny’s best friend, who has seemingly been supportive the entire episode, reveals to Jenny’s mom that she is also her daughter, the daughter she gave away after the girl was born. And, according to the friend, “Now that Jenny’s gone, we can start over.”

Which makes it explicitly clear that Jenny’s best friend is responsible for everything that happened today.

AND THEN JENNY SHOWS BACK UP.

AND THEN JENNY’S FRIEND TRIES TO KILL JENNY.

AND THEN JENNY AND JENNY’S FRIEND FIGHT AND BOTH FALL DOWN THE STAIRS.

Both are hurt but survive. And with that, the Stalker stalker puzzle is solved.

While they both lie at the bottom of the stairs, the funeral begins on The Mentalist. It’s very sad. Quite different from how Criminal Minds ends, with a game of chess on a private plane. But to each show, viewed at the same time, its own. 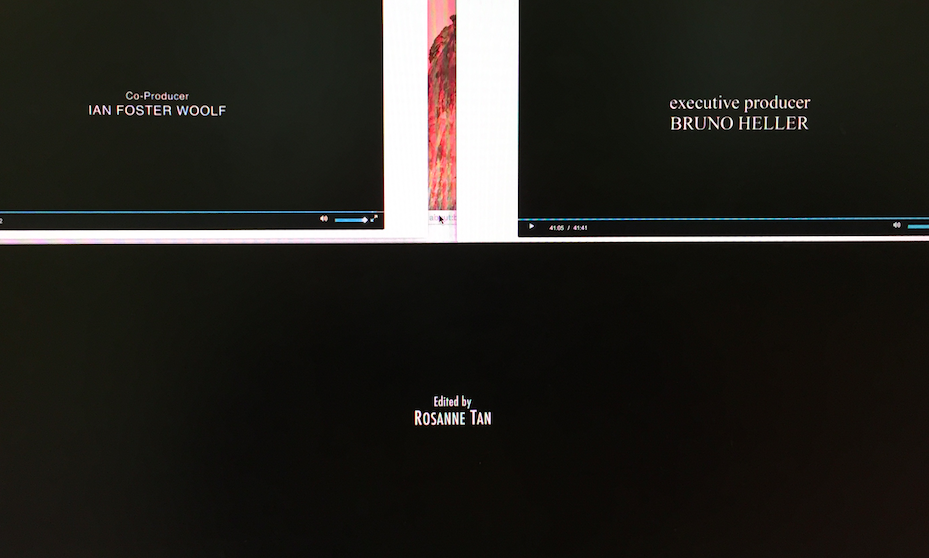 I will never again watch only one episode of television at a time. Never again.