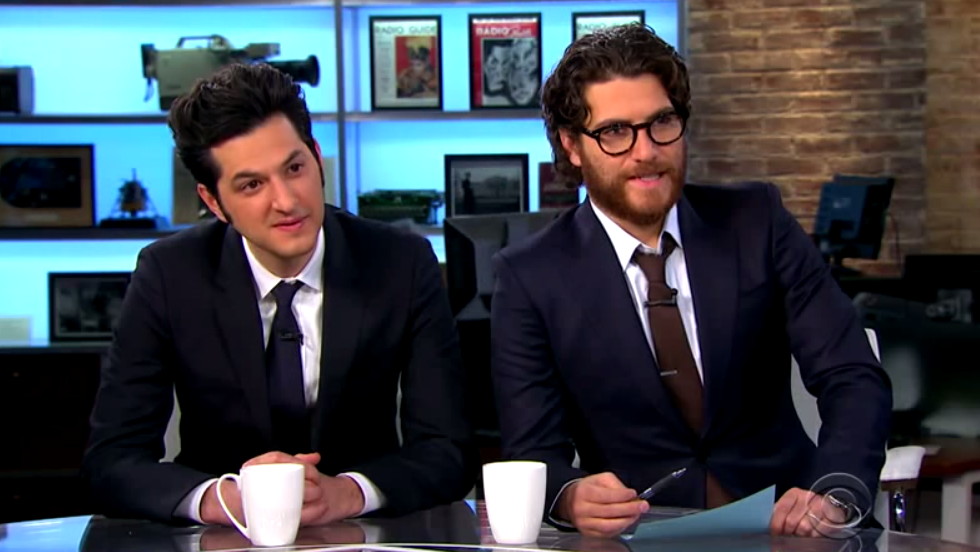 Before getting into Monday’s offerings, it’s worth acknowledging a great thing that is happening on CBS. The Late Late Show, Craig Ferguson’s gig for nine years, is without a permanent host until March 23, when the show becomes The Late Late Show with James Corden. In the interim, a series of guest hosts are taking over. Drew Carey and Regis Philbin both stood in for different stretches in January, and this week it’s Sean Hayes (Monday and Tuesday) and John Mayer (Wednesday through Friday). This past Friday, the guest host was Adam Pally (Happy Endings, The Mindy Project) with co-host Ben Schwartz (House of Lies, Parks and Recreation).

It was genuinely some of the best television I’ve seen in ages. Essentially, it’s as if a 38-minute podcast were accidentally filmed in a room with no audience (it was taped during last week’s New York blizzard) and sneaked onto one of the four major television networks.

Pally insults CBS multiple times for being cheap, a bit about Regis Philbin goes on for way too long, they start talking about Nicolas Cage’s Bangkok Dangerous for no apparent reason, and whenever it’s appropriate, they repeatedly bring up the fact that no one is watching. It’s incredible.

Here’s how it ends:

Pally: I want to thank all of my guests tonight, Martellus Bennett.

Schwartz: This was an absolute nightmare.

Pally: I think I crushed that interview on satellite, and it was tough. Beth Stern.

Schwartz: Oh my god, you know when people talk to you, they want to be anywhere else but here. They look in your eyes and they see just death.

Pally: I feel it. Eric Andre. I think I did a great job there.

Schwartz: He spun around in his chair for about 20 minutes.

Pally: Death Cab for Cutie. They really responded to my–

Schwartz: Hated you. They hated you.

I would actually stay up and watch this tandem every night, just so I could go to sleep giggling about how amazingly dumb they are.

“Well, our new outdoor seating area is about as popular as Paula Deen at an NBA Game” –the one who isn’t Kat Dennings

It’s the 100th episode of Mike & Molly. Which seems like the perfect time to learn about the Melissa McCarthy/Billy Gardell–led show about a couple who fell in love after meeting in an Overeaters Anonymous group in Chicago.

The first scene is 1080p Roseanne. People are eating, people are talking about losing weight, the husband and wife are arguing, the man is being stubborn about his health, and the dinnertime conversation is about colonoscopies. And I couldn’t be more all in. Also, this little Keb’ Mo’ intro sequence song is cute as hell.

Mike has a lot of doctor stage fright, but Molly really wants him to go. So he goes, just to get everyone off his back. But once he gets to the doctor’s office, he decides he’s not feeling it, so he leaves. What he doesn’t know is that the doctor ratted him out and called Molly. Doctors are such snitches.

Molly finds out and is pissed. So she sits down with her girls — her sister (left) and her mom (right) — and they talk it out. 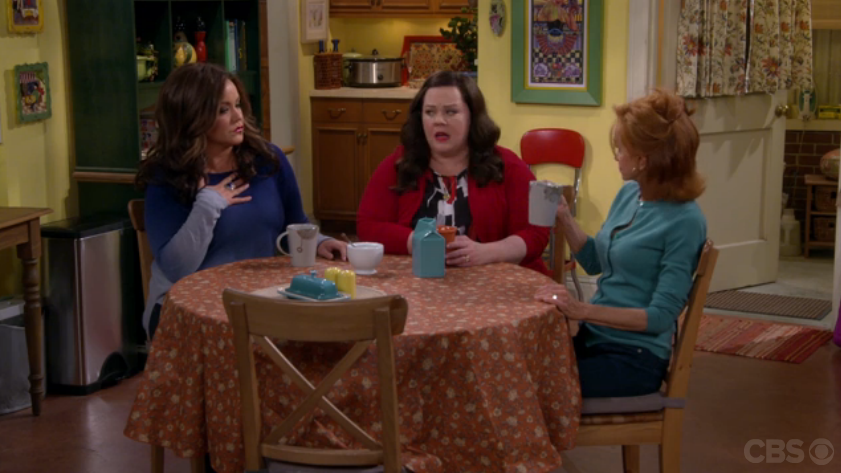 If the beginning of this episode had hints of Roseanne, this scene was an outright throwback to Golden Girls, with Molly as Dorothy, her mom as Sophia, and her sister (WHAT UP, APRIL) as this hybrid ditzy/sexual combo of Rose and Blanche.

Mom: It took me a long time to train Vincent to go to the doctor. Finally fed him some beets, he thought he was crapping blood. Been going twice a year since. 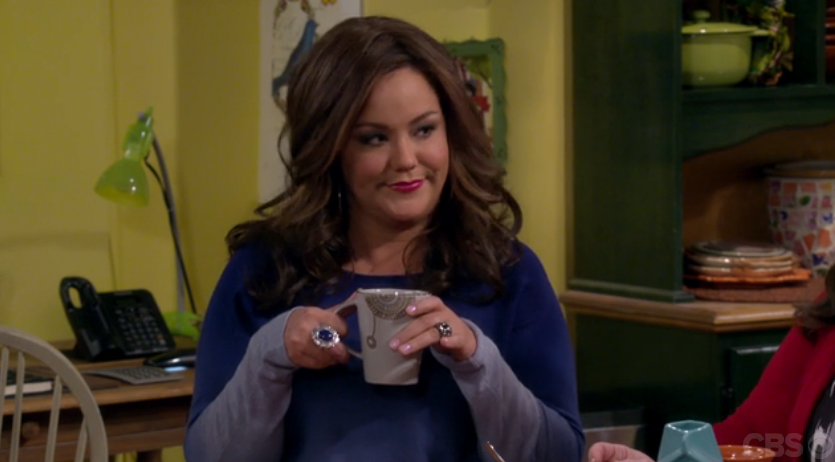 Sister: That’s it. He just loves to be naked. 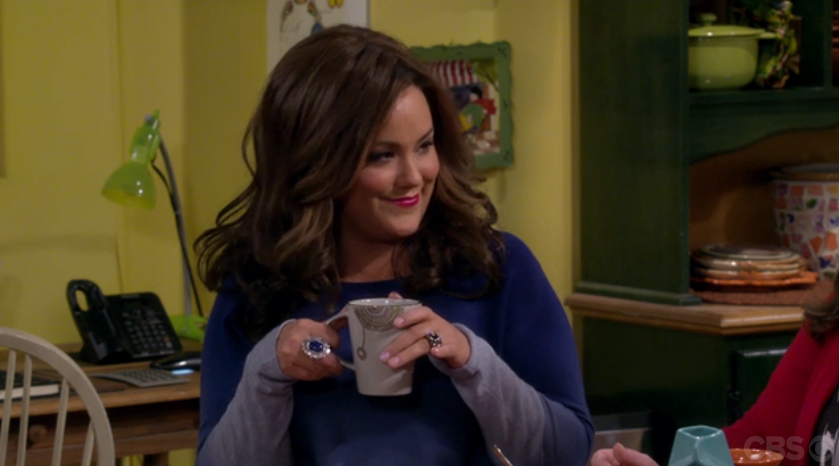 Molly: You know, Mike’s always saying that he doesn’t want me to treat him like a baby, but right now I’d like to swat him on the bottom and put him to bed without a bottle.

Sister: Carl likes that, too. 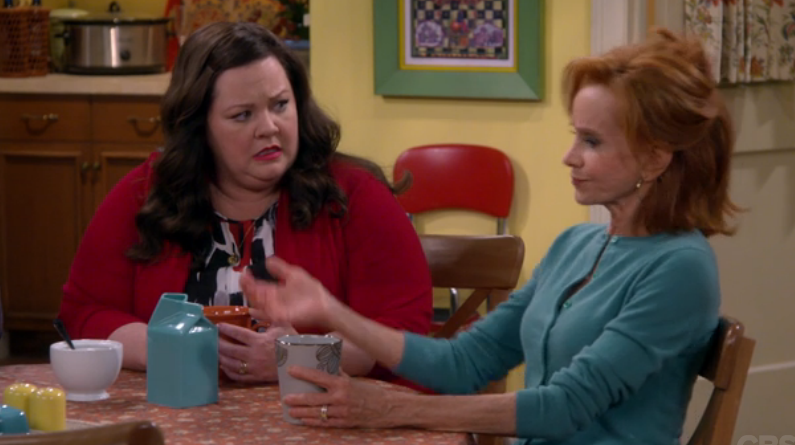 Mom: Remember how we used to get Monroe to the vet? A trail of Snausages to the back of the car. He thinks he’s going to the park, next thing you know, his balls are gone and he’s not humping new girls anymore.

Molly: Mom, I want to send him to the doctor, not neuter him.

Mom: Just saying — get him there … And then decide. 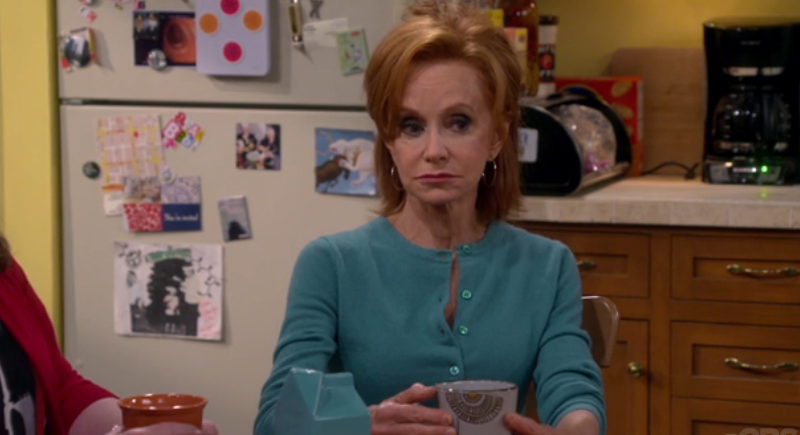 I get why this show works and is popular. It’s actually funny. And it’s not just Melissa McCarthy, it’s everyone. It feels like a ’90s sitcom that held up extremely well. Half the episode is people in their forties, fifties, and sixties making colon jokes. What’s more relatable than that?

And in perfect ’90s sitcom fashion, it takes a turn for the informative. Because Mike ends up going to the doctor and finds out he needs to get a mammogram.

And then it turns into a mammogram episode.

AND THEN IT BECOMES AN EPISODE ABOUT EXPLAINING TO MEN WHAT HAPPENS WHEN YOU GET A MAMMOGRAM AND THAT EARLY DETECTION IS KEY AND THAT YOU HAVE NOTHING TO BE ASHAMED OF.

I guarantee this was uttered by stubborn fathers all over America last night:

Right before Mike goes in to get his mammogram, after being counseled by two women in the waiting room, his mother shows up. It’s very sweet. 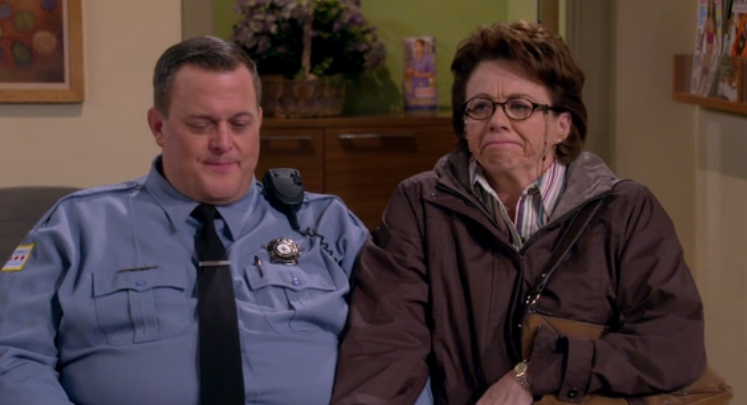 She comforts him. And then rounds third:

Just so you know, you get the lumpy breasts from me.

And then slides home:

Scorpion, the relentlessly publicized new drama that debuted last night on CBS, is a show about a ragtag team of misfit geniuses who solve problems that the Government (played with trademark craggy resolve by Robert Patrick) can’t handle on its feeble-minded own. We know that this ragtag team is composed entirely of misfit geniuses because they remind us of this roughly every five seconds of their 44-minute screen time. Even making allowances for the often-awkward stage-setting of pilot episode exposition, these geniuses do a lot of talking about their brilliance. Did you forget this is a show about geniuses? Don’t worry, they’ll drop that in three more times before the next Big Bang Theory promo.

That’s all I knew about Scorpion. This wasn’t good. And then the episode begins and the main character is drag racing someone. And then he loses. And then he says he can’t turn over his car to the other guy, because it’s a rental.

AND THE MAIN CHARACTER ISN’T IMMEDIATELY KILLED. LOOK, THIS IS HIM, LIVING. 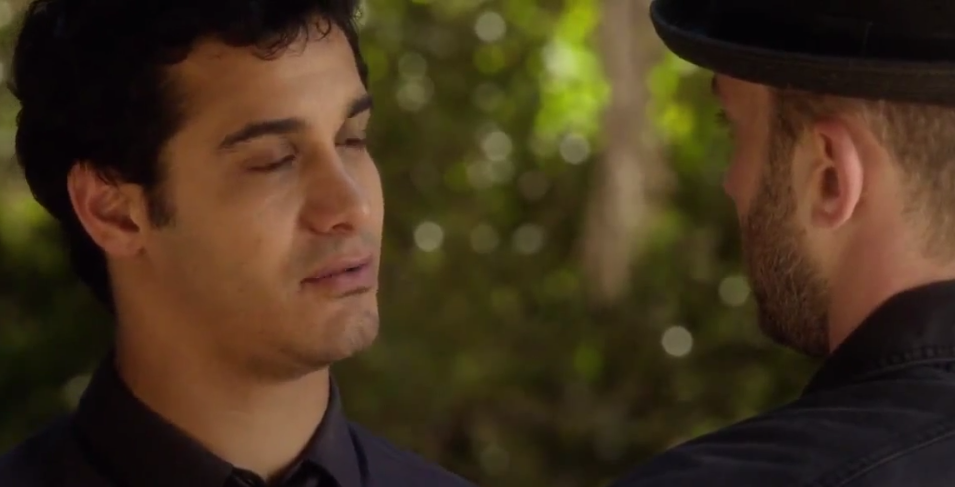 It’s hard to believe anything after this scene, because I know the rules of the streets. Tyrese taught me them a long time ago.

On this team of geniuses, one is Eddie Kaye Thomas, a.k.a. Finch from American Pie, a.k.a. Kappo from How to Make It in America. That’s a good sign, because Kappo’s the best. 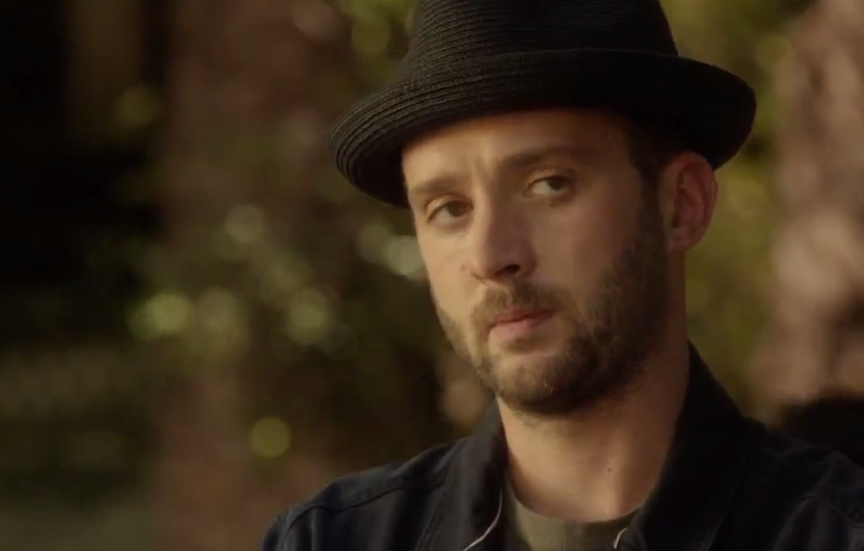 Hats seem to be a thing for Kappo. Which I guess I’ll just learn to live with for the next 45 minutes. Rounding out the geniuses are a woman named Happy and a guy who wears a vest.

In this episode, a music-industry blogger is killed, which is equal parts smh, rip, and lol. And the geniuses are brought in to help, because apparently there’s some code that will crack this case. I know this because both of these statements are uttered at the crime scene, which has never happened in the history of crime or television:

Before I go on: Also on the Scorpion team is ex–American Idol contestant Katharine McPhee. She’s not a genius like the rest, but her son is, so they let her go on adventures. McPhee’s role on Scorpion is pretty legendary, because she’s a BN TRIPLE T1 for the ages. Her face is this face, pretty much at all times. 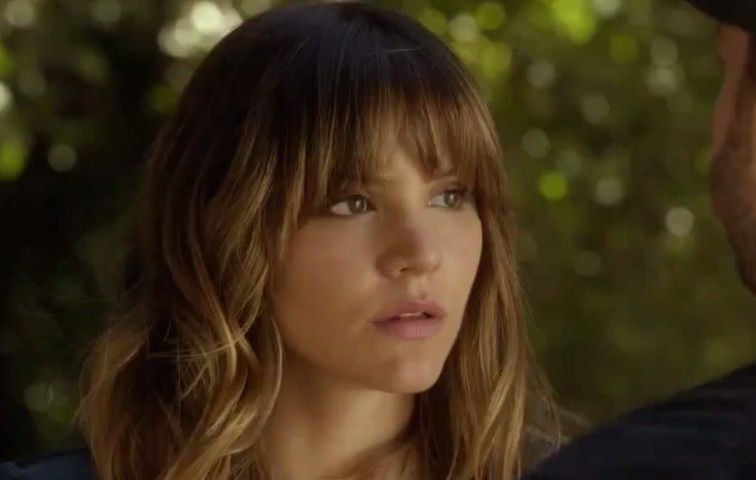 A big component of the show seems to be smart people being really smart, and then explaining to McPhee what they’re talking about. Or the team delegating complicated duties, then being like “McPhee, hold everyone’s phone and put them on airplane mode and then close your eyes and count to six.” It’s like she’s on a mental study abroad.

Paying very little attention to the plot of this show, it appears as if the Scorpion team is headed to the bad guy’s house. Our main Scorpion goes off on his own, and then steps on a trip wire, and is confronted with the bad guy, face to– 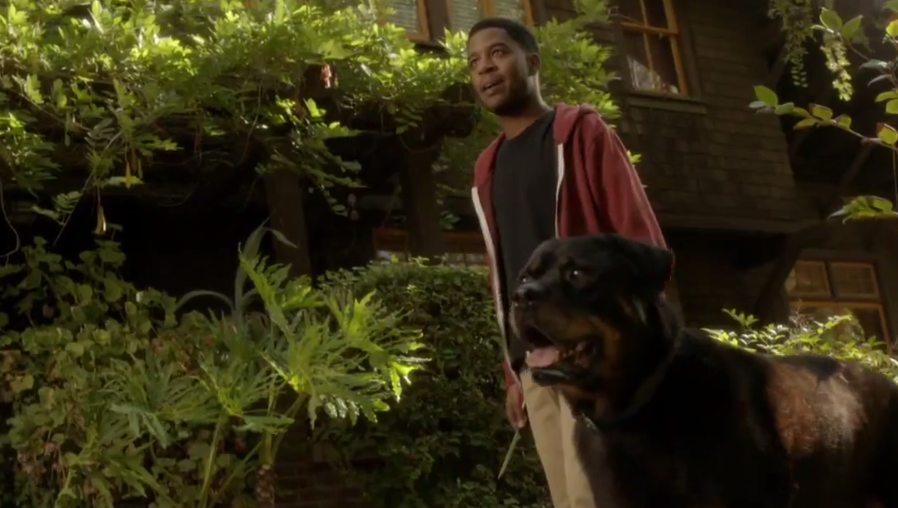 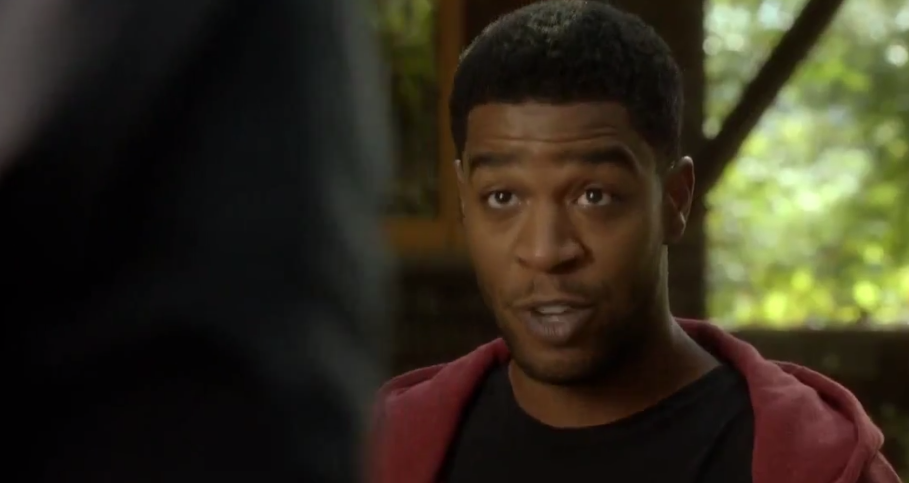 Why was I not informed of this? WHY WAS I NOT TOLD OF THE REUNION OF KAPPO AND DOMINGO? 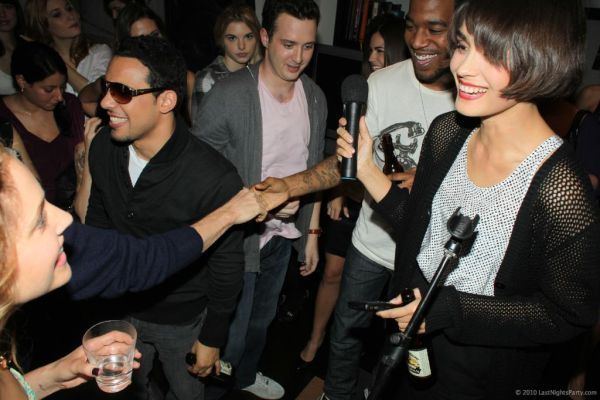 If Shannyn Sossamon pops up in this episode, I will weep and declare this the greatest show since Cheers.

Back to Scorpion: It’s clear Cudi didn’t do it. Cudi’s an ex-musician who had a program he created stolen. This is something he said in real life on this show: 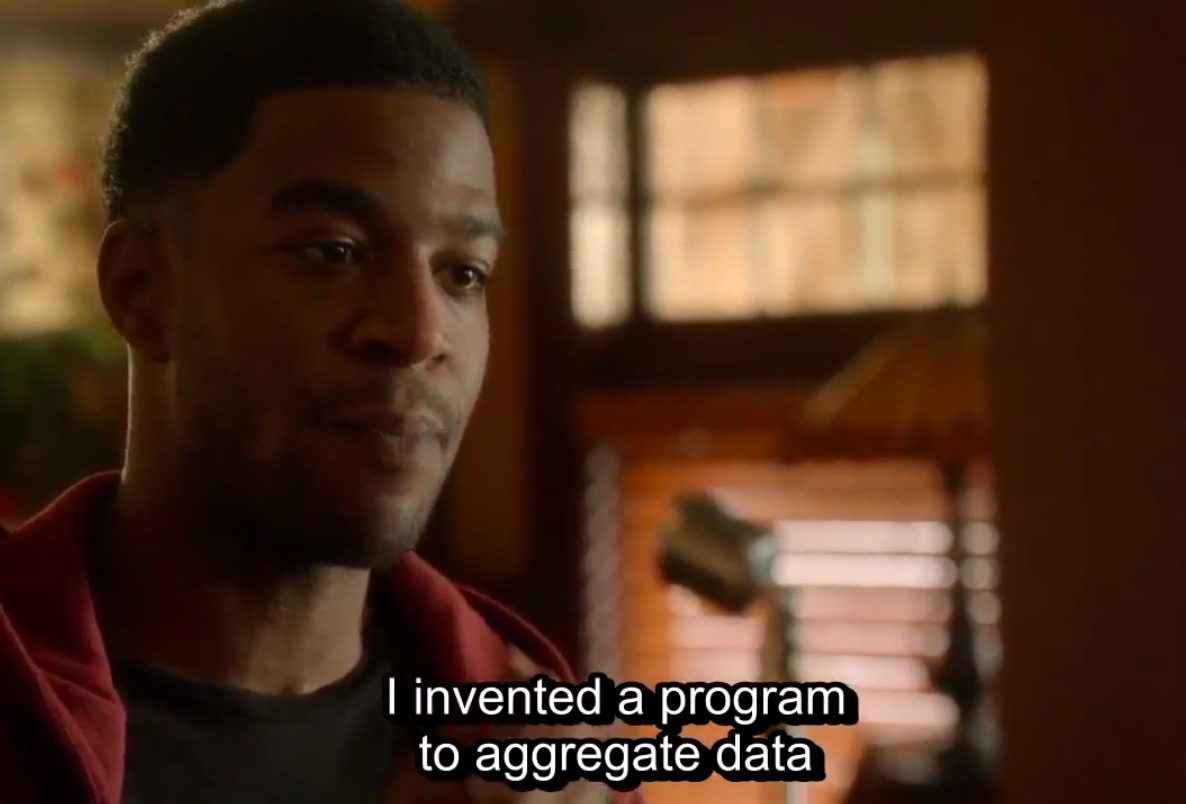 What a great time to be alive.

Cudi’s program could mathematically create the perfect pop song. And that’s what got stolen, for obvious reasons. Another Cudi gem:

I only talked about it with other like minds, mathematical types.

More, from the Autobiography of Cudi: 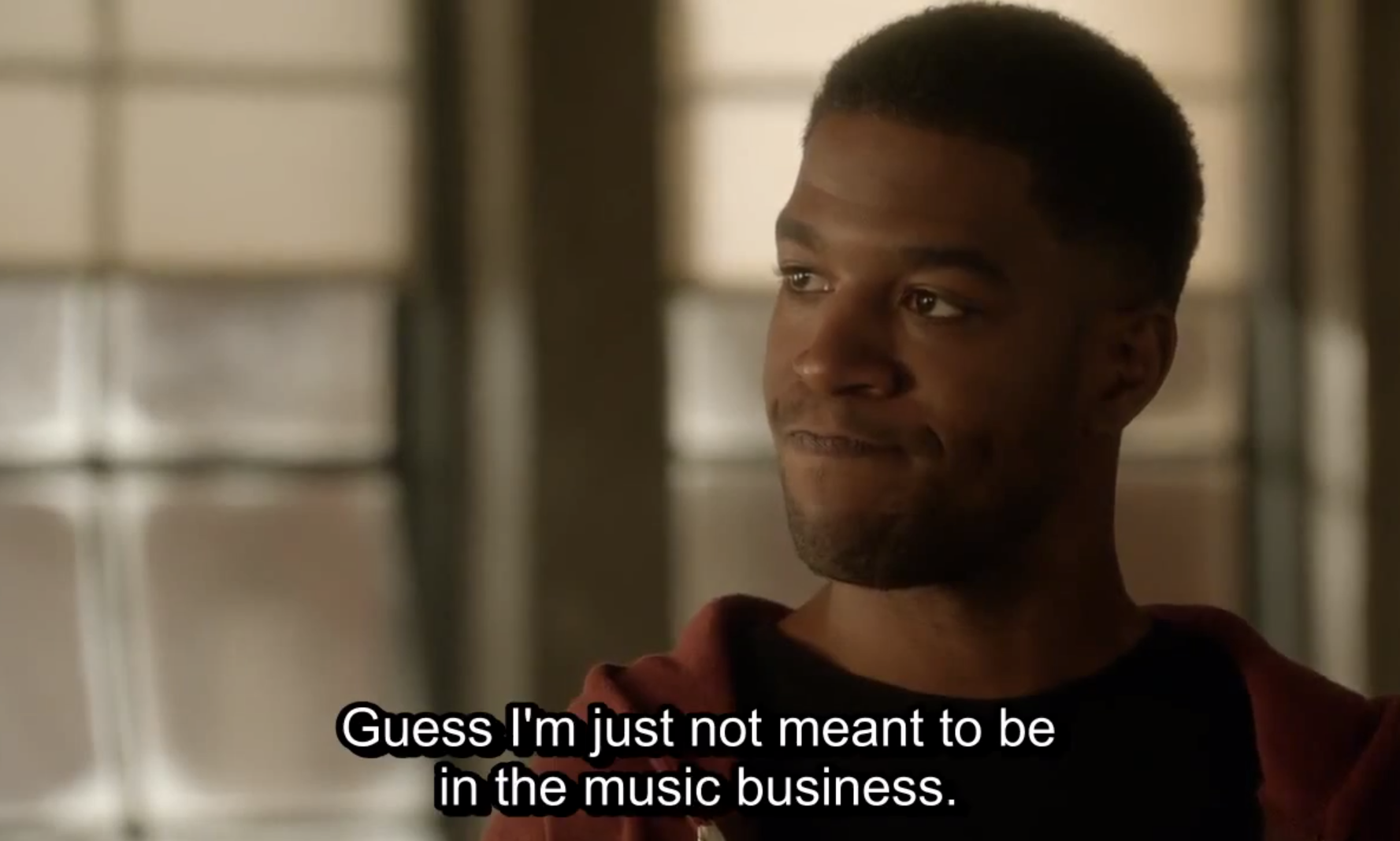 I just vomited glitter. That’s how amazing this is.

And he keeps going:

I believed in what I was playing and no one else did. Didn’t get much of a response from the media. Or the labels, so … I gave it up. Decided to put it in a box.

I mean, how many times do I need to get screwed before I learn my lesson, you know?

Nothing could mess this episode up. NOTH– 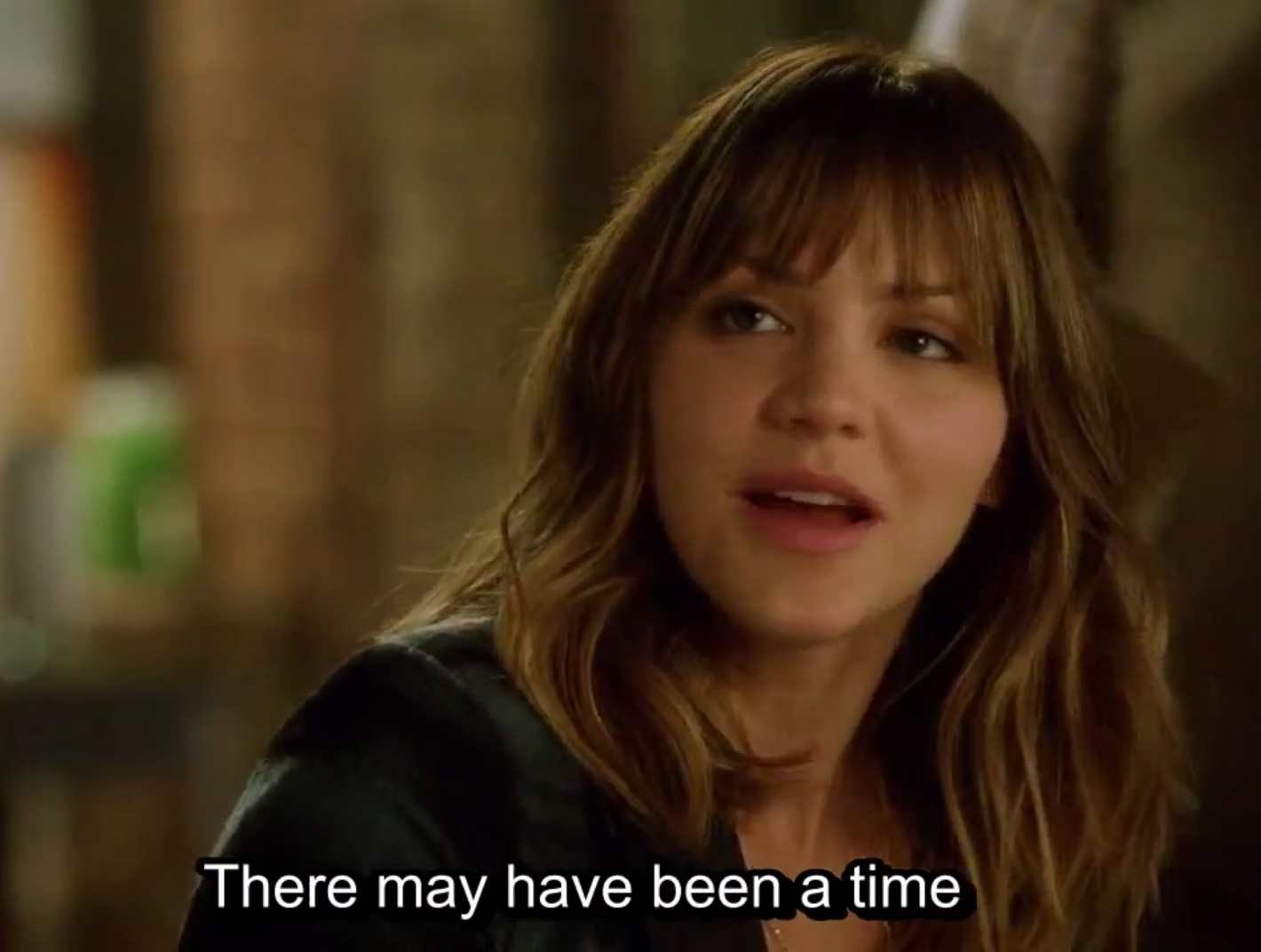 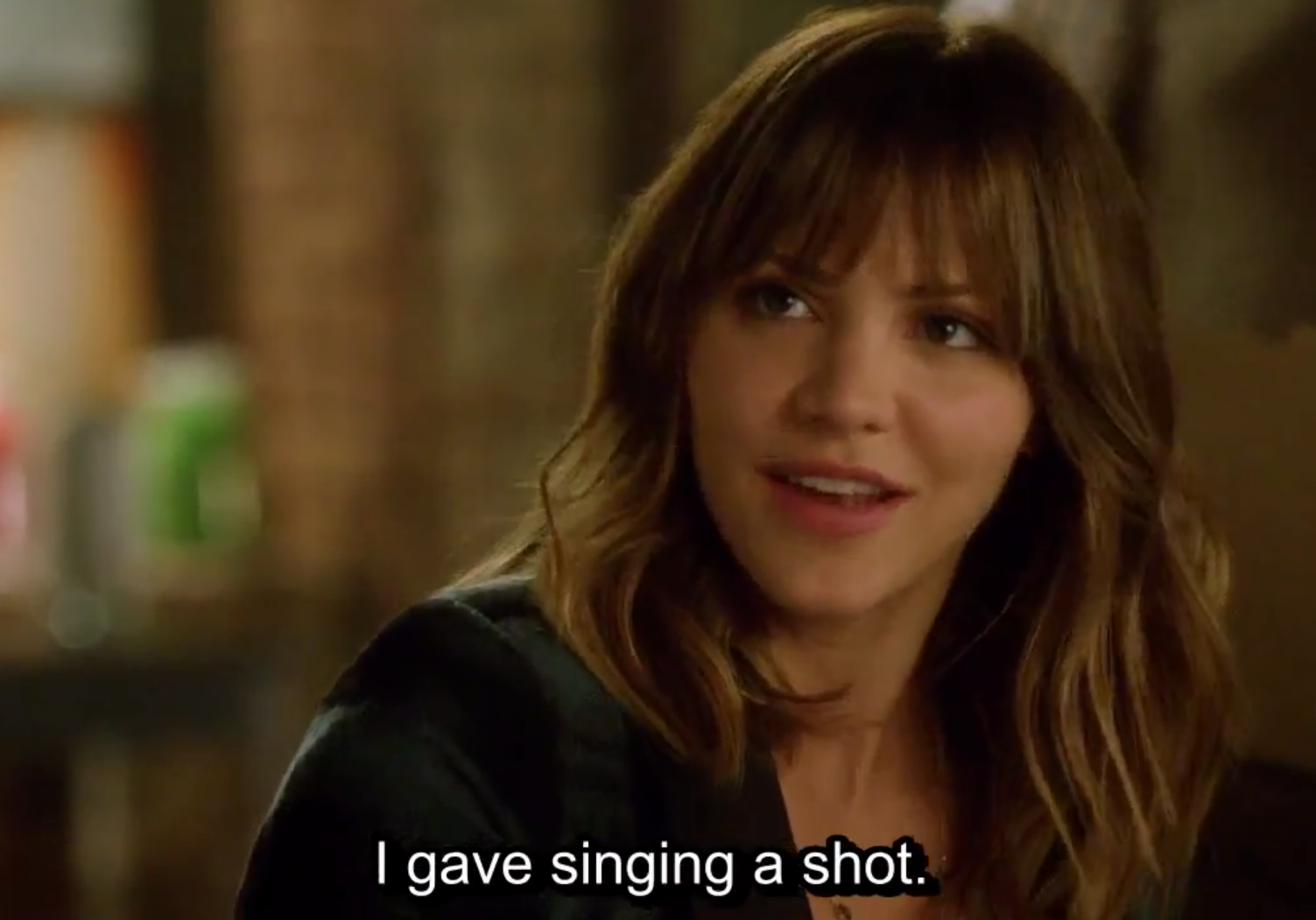 I swear if she sings this episode I’m turning it off immediately. I don’t care if it’s in five seconds.

The Scorpion team is following leads in this case, and then finds a susp– 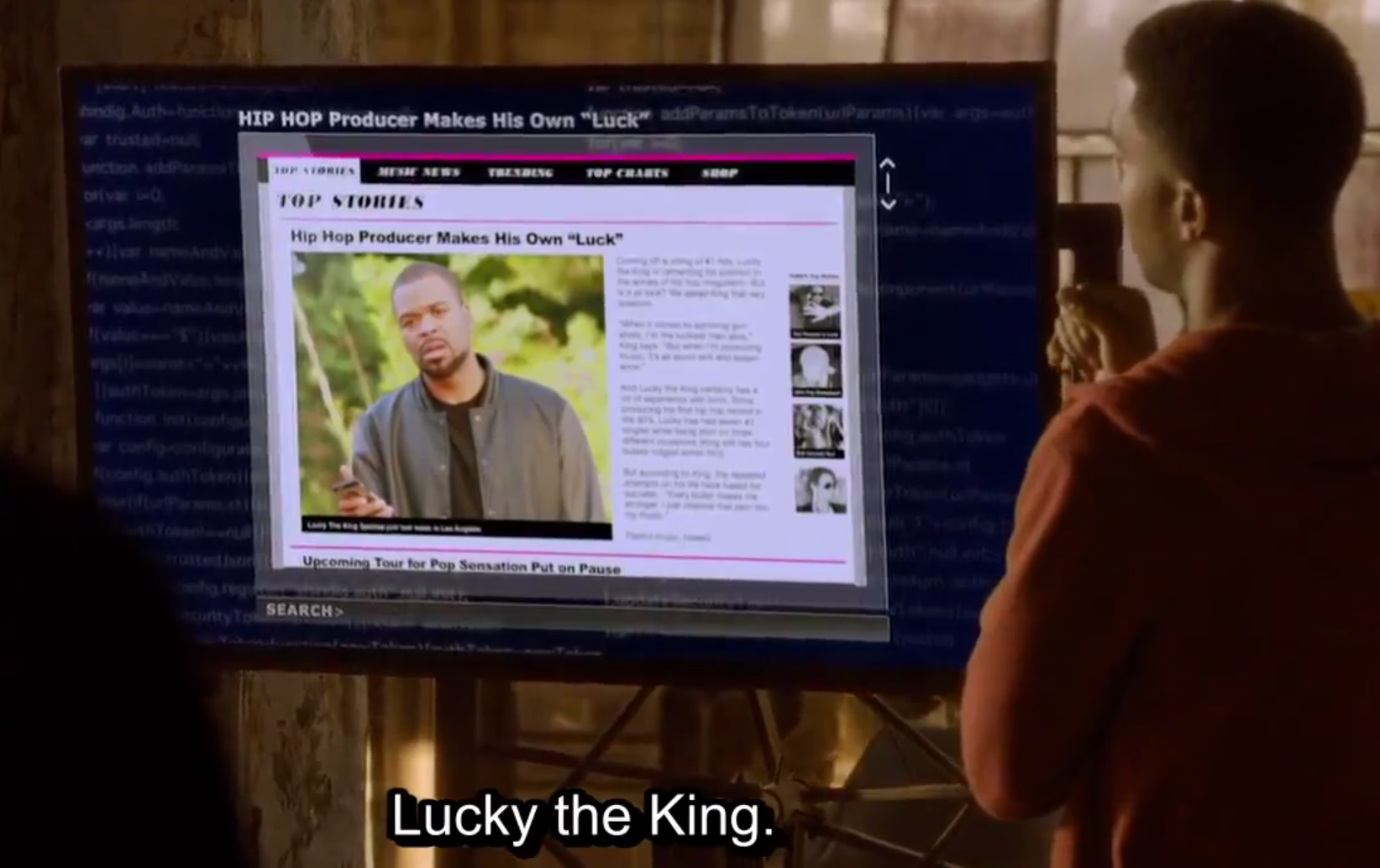 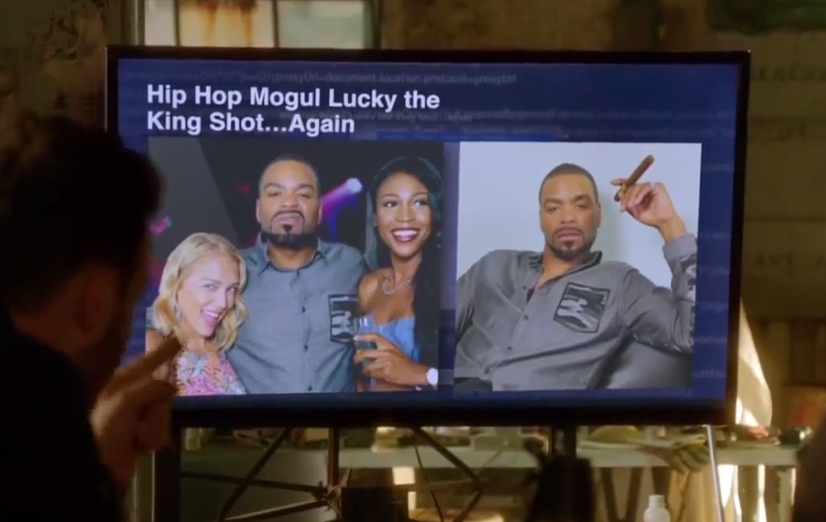 Cudi and Method Man on CBS at 9 p.m. on a Monday. Unreal.

In order to get to Method Man, they need to go to his office, which means Kappo and Domingo are going to go on a mission together. LONG LIVE CRISP. 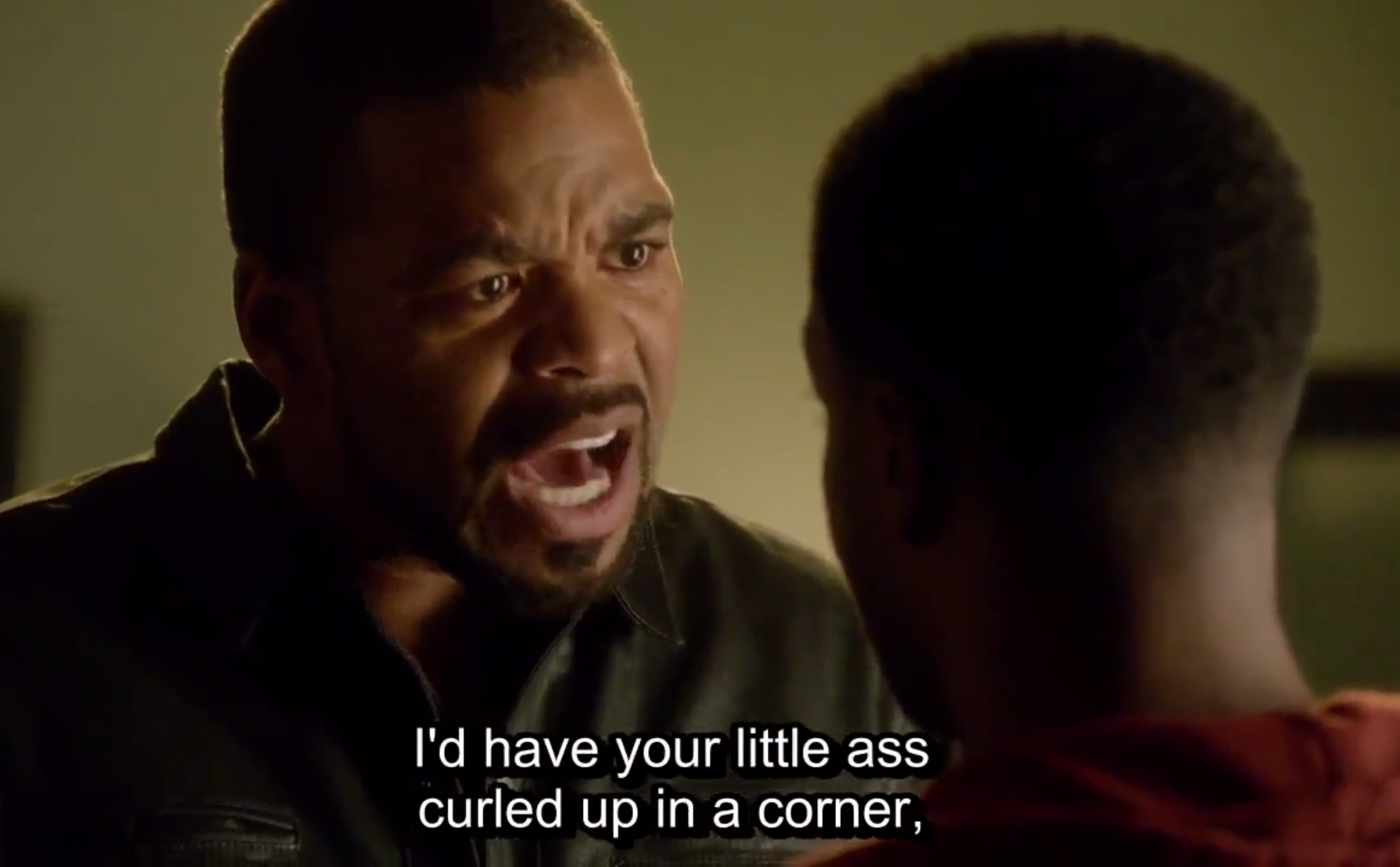 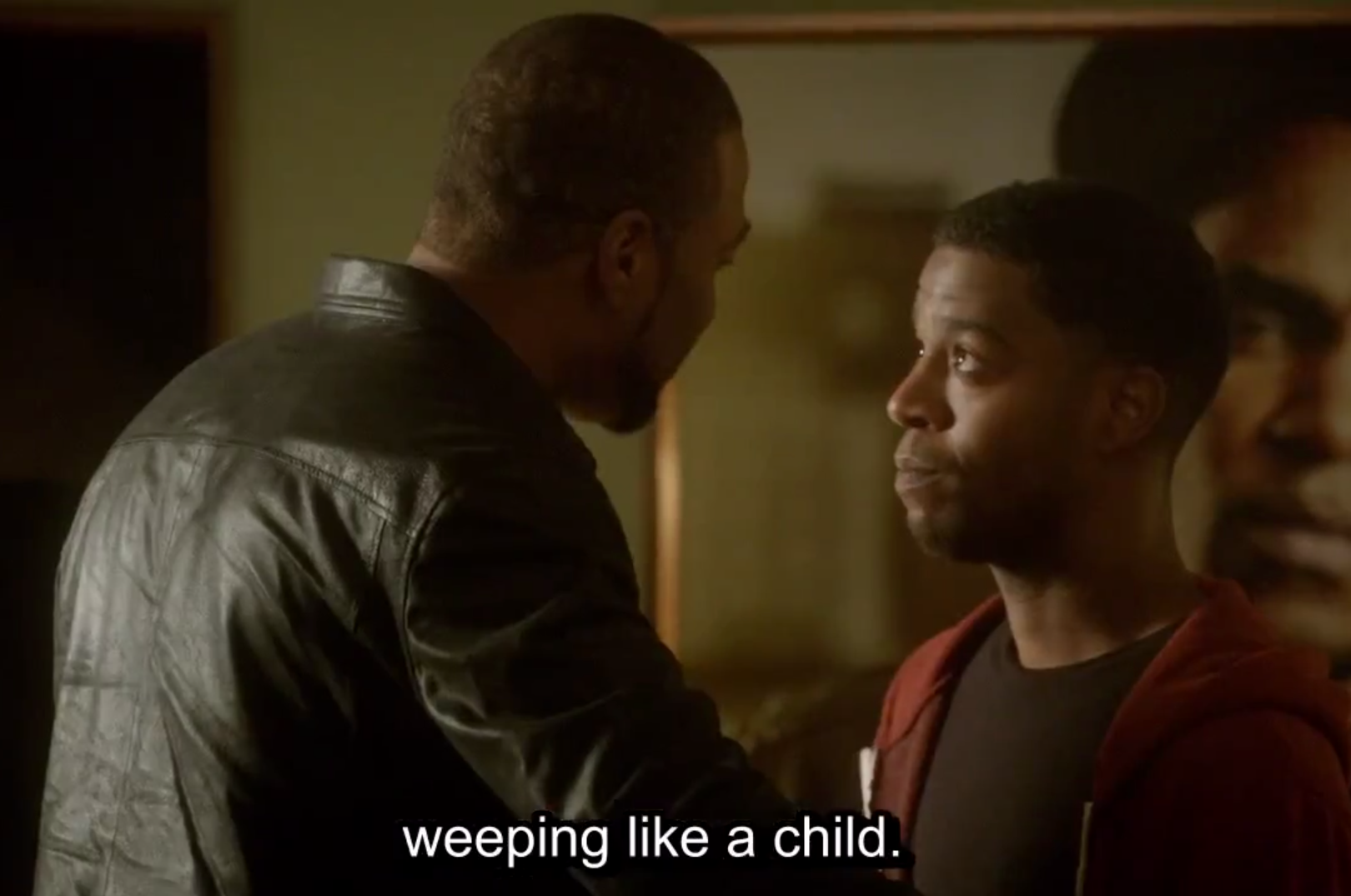 And then when they leave, someone tries to blow up the Scorpion team’s van. And then the main Scorpion gets tazed and Cudi gets abducted. And then Kappo gets Suge Knight–dangled over a roof by the legs. 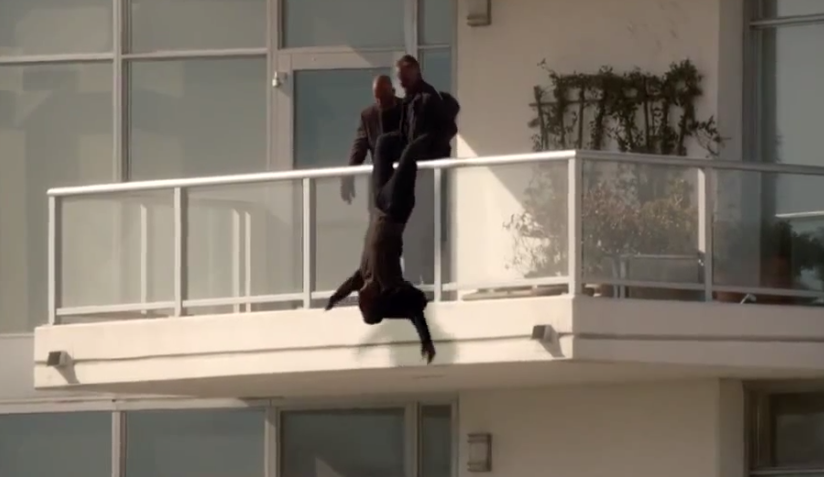 But then it all works out.

And they go back to the Scorpion lair and Cudi starts playing piano. And everyone’s happ– 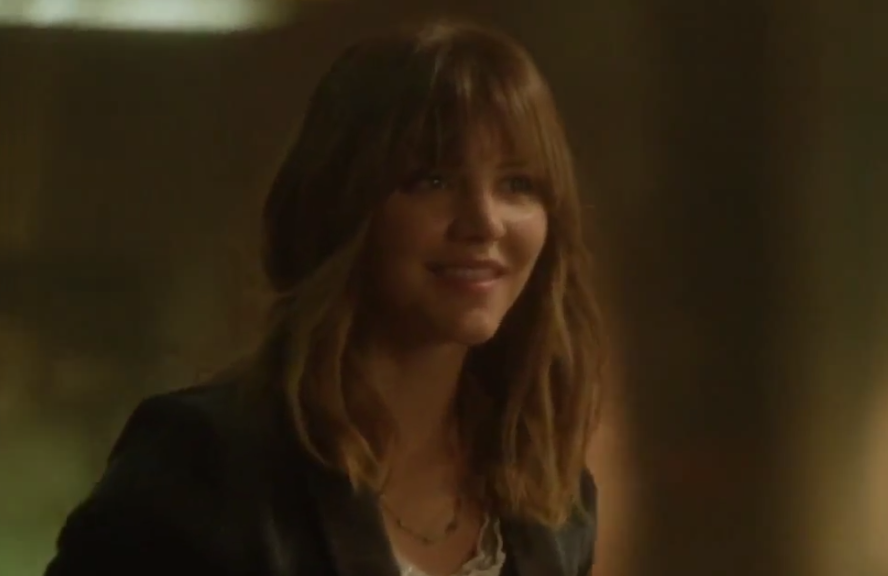 DON’T YOU DARE, MCPHEE, I SWEAR 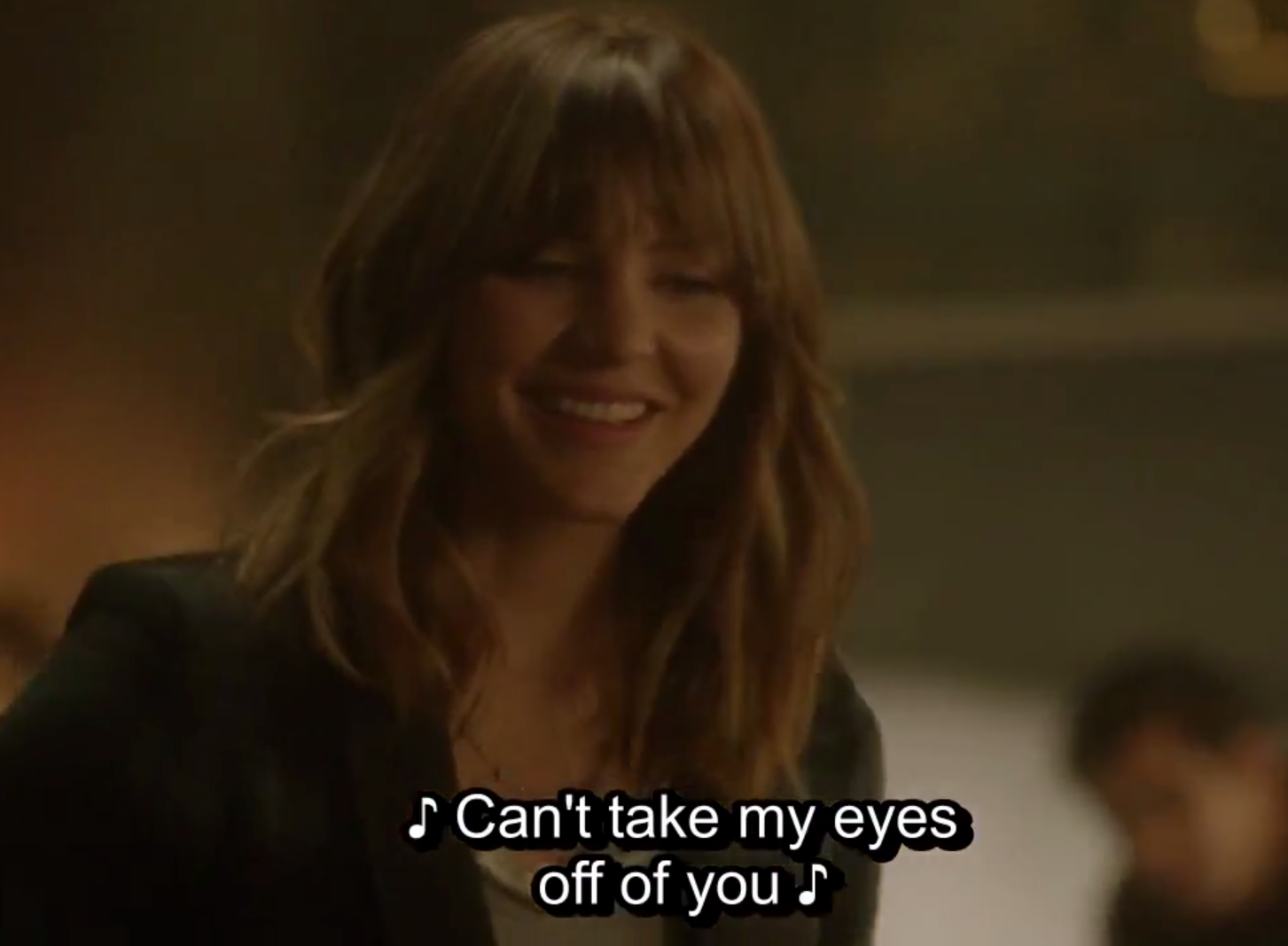