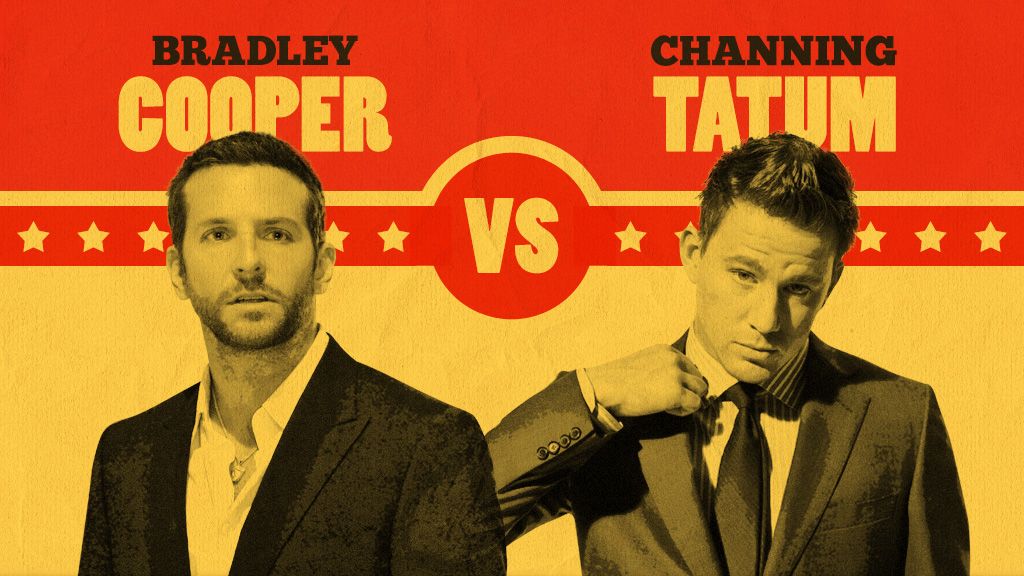 The Upper Hand is where Grantland staffers pit unsuspecting entertainers against one another to determine who currently has a greater grip on the hearts and minds of America. It’s a long way of saying X > Y. It may seem reductive, or even unnecessarily competitive, to put our gentle creators into a squared circle, but it’s a useful exercise in seeing who is doing things right, who is doing things wrong, who is doing things differently, and, of course, who is winning. At the end, a guest judge will hand down a verdict. Today’s debaters are Chris Ryan, on the side of Bradley Cooper, and Rembert Browne, arguing the case for Channing Tatum. Mark Lisanti wears the robe (he is also judging) (am I right?).

Biggest Hit in Which They Actually Appear
Cooper: The Hangover
Tatum: 22 Jump Street

Chris Ryan: There can only be one Ken doll. Bradley Cooper, 39, has one blockbuster tentpole to his name — the Hangover series — an Oscar nomination for Silver Linings Playbook, critical acclaim for his role in American Hustle, one of the great sixth-man performances in modern movie history in Wedding Crashers, and a big, Oscar-bait Clint Eastwood film on the way with American Sniper. He started from the bottom, hosting Globe Trekker, and now he’s here. He’s a talking raccoon. Talk to me, Magic Rem.

Now that we’ve gotten that out of the way: There’s no comparing that goon to the goblin known as Channing Tatum. He’s 2014 Will Smith. Remember how long we’ve been looking for someone to pick up the Willennium Torch? Well, he’s here. Tatum is a bona fide action star (G.I. Joe, Haywire, White House Down) who is funnier than most comedians (the Jump Street movies, Saturday Night Live), he can dance like his life depends on it (the Step Up series, Magic Mike, random strip clubs), and can rap when prompted (“Dick Graze”). Very few people can do everything. Channing can.

But feel free to keep sending me Wedding Crashers clips in an attempt to prove your point.

Chris: They’re decimating the grubworm population, Rem. I see you’ve resorted to the Fresh Prince of Tampa defense. Channing isn’t Will, Channing is Mark Wahlberg 2.0. They should have called the movie Magic Mark. But these guys actually have a lot in common: Cooper and Tatum both like to play beautiful boys who try to prove they have beautiful minds. If you had to sum up their essence in a GIF — and let’s face it, you do have to — it would be this:

Breakfast of champions right there. In American Hustle, Limitless, and The Words, Cooper plays parts in which he goes to great lengths to prove his intellectual worth to others. He is crippled by people underestimating him. These movies are about him showing them he can walk. Or be funny. Or be tough. Hell, in Limitless, my man takes a MIND-EXPANDING DRUG. I am fascinated by guys like this — even if I’m not always taken with their movies. Whenever I see someone like Cooper or Tatum, who seemingly has it all — good looks, good taste, good hair, good moves, attractive partners, their choice of material — I automatically assume they are holding the wheel a little too tight. Like, whatever it took for them to get where they are is kind of weighing them down. And it’s when they crack a little bit that they are at their most interesting. I like Cooper more than Tatum because he’s aware of this.

I won’t deny that Tatum, on the surface, probably makes better movies. But I like that Cooper wears this tension — this feeling of not quite belonging in the club — on his sleeve.

Rembert Browne: I think you’re completely right about Cooper. He has a chip on his shoulder — one that probably stems from real life — and that has translated into his roles, in a very real way. But so does Tatum. And as he takes more serious roles, roles it’s clear he can handle (now that he’s out of “serious” romantic drama, like Dear John), that chip will continue to show. Even in a comedy, like 21 Jump Street, Tatum nails the role of a big, brawny jock who actually wants to be taken seriously, as someone with a brain. I’ve yet to see Foxcatcher, but based on the snippets I’ve watched, and what I’ve heard, he homes in on this character — one who is treated like an intellectual pushover, someone you can tell what to do because they’re all muscle and no smarts. Eventually they find it in themselves to battle back.

Cooper and Tatum both have a ton going for them, and that’s even before considering that each was a People Magazine “Sexiest Man Alive” (Cooper in 2011, Tatum in 2012). So maybe it comes down to the fact that only one of them is guilty of making Hangover 3?

Chris: Your boy made White House Down. That wasn’t even the best White House movie made in 2013. He had an action movie arm-wrestling match with Gerard Butler, and he lost. Gerard Butler! This leads me to another point: Channing Tatum needs other people to make him successful; Bradley Cooper does it all on his own.

Channing Tatum needs Jonah Hill in order to be funny.

Bradley Cooper is the funniest thing in Wedding Crashers.

Rembert: Before I go “Ether” to your “Takeover,” I think it’s worth noting that my appreciation of Tatum is purely from a place of acknowledging the truth, whereas yours aligns with Cooper being, like you, from Philadelphia, and him making the Eagles relevant in Silver Linings Playbook. 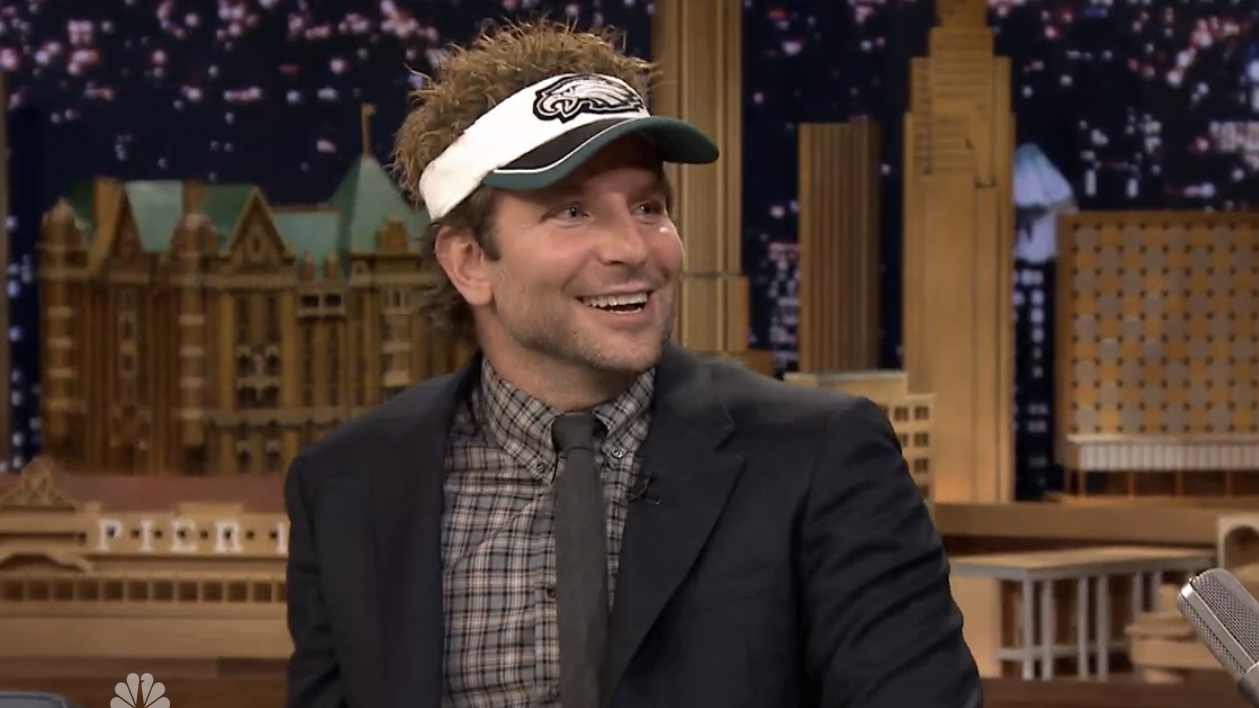 Chris: How dare you.

Just give up, Chris. There’s no way to bounce back from three consecutive Jimmy Fallon clips.

Chris: Well, Channing Tatum definitely has the upper hand as a late-night guest. Though Bradley has his charms.

Levels. Look, the truth is, we’re going to find out who has the upper hand in the next 18 months or so. Tatum has Jupiter Ascending, which looks like an incomprehensible dog baby1 in space, a small part in The Hateful Eight, another Magic Mike, two X-Men movies (he’s playing Gambit), a supporting role in a Coen brothers movie (Hail, Caesar!), and another Jump Street. So that’s two smaller roles in prestige movies, three franchises, and a preordained flop.

Cooper is doing American Sniper and the untitled Cameron Crowe movies — both of which he stars in. And he’s also reuniting with the Russell/Jennifer Lawrence hit squad to make Joy, and starring in some John Wells movie about a chef that will probably be a glitzier version of … Chef. The point is, Cooper is swinging for the fences. He’s not spending the next year playing the 3&D guy for a championship team, he’s playing hero ball. I get how Tatum is laying out his career — he will probably have a long and successful one. But only one of these guys is a true movie star, and it’s the one who takes movie star parts.

Rembert: Swinging for the fences, hero ball, not being 1999 Isaac Bruce — basically you’re describing James Franco. Pretty wild you did your man Cooper like that.

You can have your “movie star.” I’m going to take the guy who everyone seems to acknowledge improves the movies he’s in. Tatum doesn’t have to be the star of the show, even though he most certainly can.

Cooper’s a ball hog. He’s Joe Johnson. JUST LOOK AT HIM MAKE THIS SELFIE SOMEHOW STILL ABOUT HIM. 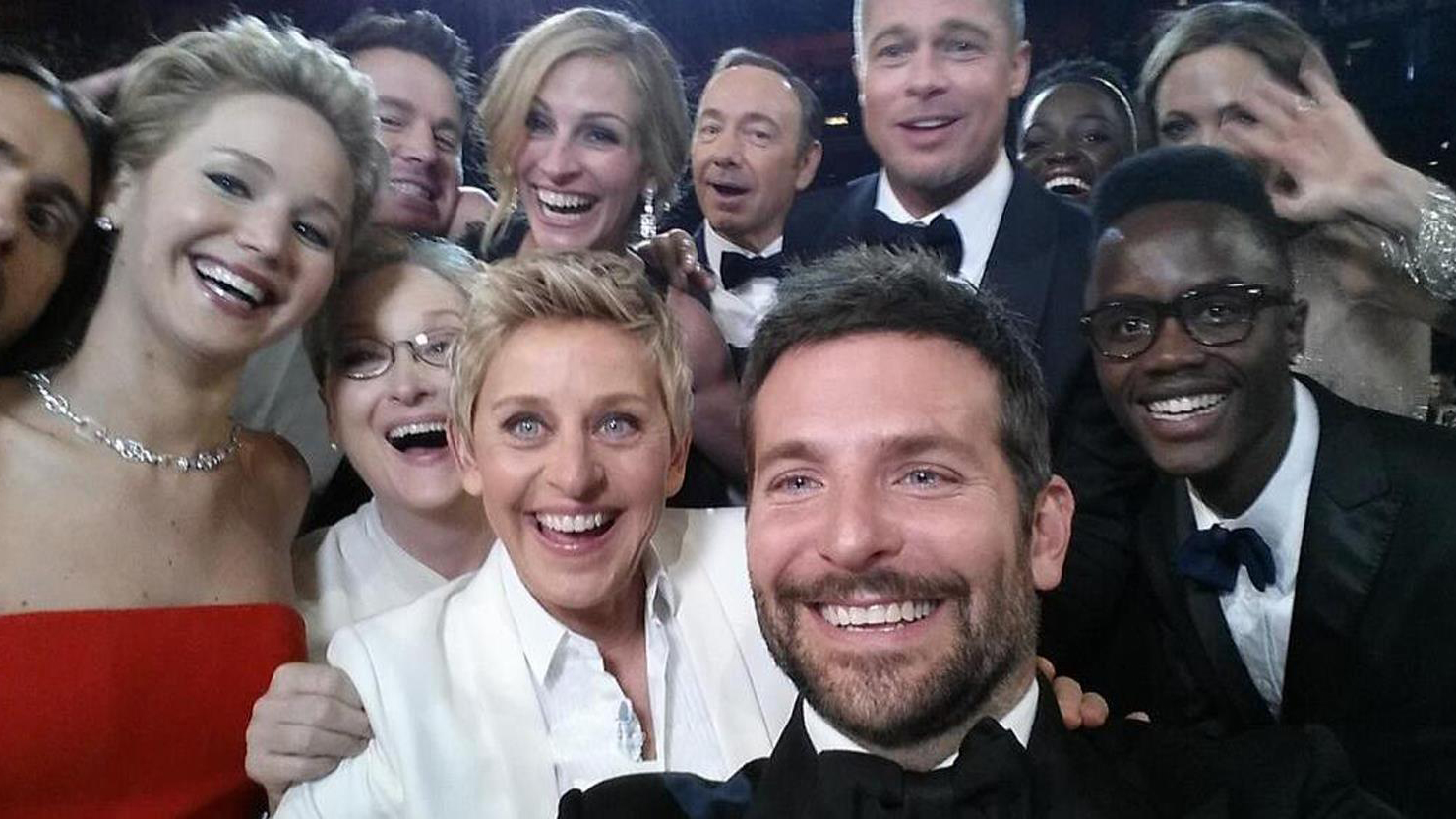 Who’s that in the back left? Oh, just Channing Tatum, being part of history. But not making history about him.

You’re right, these next 18 months are crucial. And I hope both men truly crush and continue to be stars. But it couldn’t be any clearer that Tatum’s star is the brightest.

Guest Judge Mark Lisanti: This is a tough one: two stars at perhaps the height of their powers. Two sides ferociously fought. Two once-pristine Ken dolls brutalized for our amusement in the Thunderdome of our minds.

The Judge thinks it comes down to this: You could argue, correctly, that Cooper has accomplished more — he’s got the gold and the green, the Oscar nominations and the box office edge. You could argue, even more correctly, that we may have already seen Cooper’s best, and that Tatum — always on a hustle — is still on the come-up. But what about right now? Who excites you more right now? I can’t help but go back to this:

And when I peek over the horizon and think about what’s coming next year, who do I see standing there, smiling back at me? Well, maybe it’s not exactly a smile.

Channing Tatum has the Upper Hand.