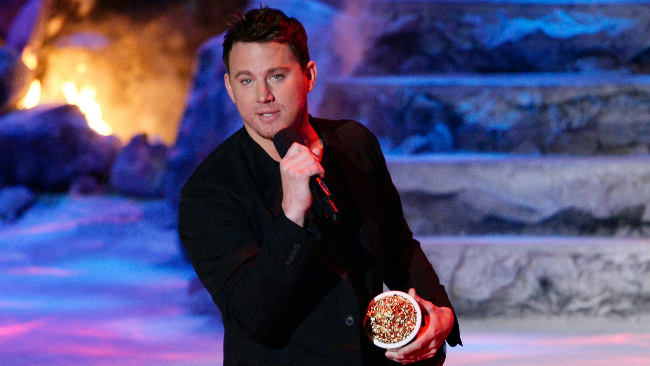 Immediately after taking home the coveted We’ll Send a Car and Make You a Montage popcorn bucket at Sunday’s MTV Movie Awards, Channing Tatum revealed to MTV News that he’s met with producer Lauren Shuler Donner about potentially starring as the Cajun mutant super-thief Gambit in an upcoming X-Men spinoff. The project is in the “if the stars align” phase for now, but judging by this weekend’s sound bites, Tatum is already mastering the most important skill in the superhero-movie-actor playbook, namely the ancient art of pretending that some ridiculous corporate-comics character you got pitched nine days ago is the role you were born to play:

Gambit’s my really only X-Man that I’ve ever loved … I guess just being from down south. My dad’s from Louisiana and I’m from Mississippi, Alabama, and Florida — I don’t know, I just related to him. He’s just kind of a suave — he’s the most un-X-Men X-Man that’s ever been in X-Men, other than maybe Wolverine. He’s kind of like the antihero; he’s a thief … He loves women and drinking and smoking. He’s just a cool guy that happens to have a good moral center.

Well done. Could be tighter, but he’s got three months to workshop the rap between now and Comic-Con — he’ll get it down.

Devotees of Fox’s X-franchise movies and/or Dillon Panther football will undoubtedly remember Taylor Kitsch making a brief, test-marketingish appearance as Gambit in 2009’s dismal X-Men Origins: Wolverine, which also featured Ryan Reynolds as Deadpool and Will.i.am as Dumber Version of Nightcrawler With a Stupid Hat On.

Kitsch subsequently expressed interest in reprising the role. In 2009, he told Rotten Tomatoes, “I’m just excited to go deeper into Gambit.” (Too easy, moving on.) But that was before his small-screen-bred charisma proved surprisingly non-scalable in two high-profile 2012 bombs, John Carter and Battleship. Taylor Kitsch: Demonstrating That Being a Pretty Good Actor and Also Absurdly Handsome and Built Like a G.I. Joe Whose Code Name Is “CrossFit” Is Not Enough Since 2012. Had he been reached for comment, Kitsch would undoubtedly have been like:

So now the role may belong to Tatum, whose track record in this approximate area is significantly stronger. Magic Mike and Side Effects proved he can act, White House Down proved he can deliver the kind of quipping-while-ripped performance a comic-book movie demands, and in the forthcoming Jupiter Ascending he’ll presumably prove he can hold the screen amid shit-tons of CGI while for some reason wearing Goat Boy ears. Cocksure without being arrogant, centered but never self-serious, Tatum just radiates good-dude-ness, and it’s hard to begrudge him his chance to give the old superhero-franchise money tree a few shakes. The problem isn’t Tatum. The problem is Gambit. The problem is that Gambit Is. The. Worst.

He first appeared in two X-Men comics published in the summer of 1990, and was one of the last major X-characters introduced by longtime Uncanny X-Men writer Chris Claremont before Claremont’s departure from Marvel Comics in 1991. Over the course of his 16-year run on the X-books, Claremont had imbued each member of his sprawling cast of mutant heroes with a degree of weight and dimension that was rare for mainstream comics. But Claremont never quite got around to fleshing Gambit out before he left the book, which meant the version of the character handed off to subsequent writers was essentially just a collection of Claremontian tics and borrowed notions — an accent and an attitude, wrapped in a trench coat inspired by the one Christopher Lambert wears to hide his sword in Highlander. He eventually acquired a government name — Remy LeBeau — and a convoluted backstory, including an estranged wife and a dark past involving X-Men villain Mister Sinister, but as a character he’s never become more than a collection of cool-guy tics.

He was utterly superfluous from the beginning, an edgy Wolverine figure shoehorned into a team that already had a pretty good edgy Wolverine figure in Wolverine. At one point early on, we saw him fight Wolverine to a standstill in the Danger Room while Wolverine’s protégé Jubilee cried in the control booth. It was supposed to establish him as someone not to be trifled with. Even at 13 I understood this to be bullshit.

A word about the trench coat: It’s really long. Totally practical for a master thief who engages in a lot of hand-to-hand combat. He wears fuschia body armor underneath it. He speaks in phonetic-Cajun dat’s-dem-dere dialogue, like someone making fun of Dr. John. He calls men homme or mon ami. He calls women “mam’zelle” and chere, and this inevitably causes women to swoon over him, since one of his superpowers is an almost irresistible charm. People write fan fiction about his relationship with Rogue, who can’t touch anyone for fear of draining their energy; you can tell it’s fan fiction because nobody ever notices that Remy is a smarmy creep.

Repeating for emphasis: One of his mutant powers is super-sexiness. His other mutant power is the ability to “charge” any object with kinetic energy, which thanks to some don’t-worry-about-it comic-book pseudoscience means he can turn anything into a bomb that explodes on contact. He’s done it many, many times, to many different kinds of objects, but mostly, instead of throwing something practical and easily throwable like batteries or coins or three-quarter-inch bolts or, oh, I don’t know, knives, he throws playing cards.

It’s kind of his trademark, because of a formative incident involving a villain called the Pig. But it doesn’t matter. He throws a thing that’s very difficult to throw, because he’s trained himself to be a master playing-card thrower. Which presumably meant sitting for hours with a deck of cards and a hat, just tossing them in there. This is classic notice-me-I’m-a-cool-guy behavior, like playing acoustic guitar in the freshman-dorm stairwell. It’s an affectation. He can charge any object, but he chooses the cards. There’s a word for someone who cultivates a trademark like that. The word is “asshole.” Do I need to tell you that the version of Gambit in the Kids WB cartoon show X-Men: Evolution has a soul patch, or could you just assume that from context?

I respect Channing Tatum’s talent; I also respect his desire to branch out instead of cranking Jump Street sequels until they outnumber the Police Academy movies. I’m just not sure a movie where he jumps around in a duster while talking like Justin Wilson is the right exploding playing card to whip at this problem.

And I don’t want to hear it, Gambit fans. If your dude were really so awesome, nothing resembling this sentence would appear in his Wikipedia entry:

“Standing in the cold, scouting the Weapon X facility, Remy couldn’t bear the cold and swore he would steal a long, stylish jacket in New Orleans after the mission, which he did.”

And yet it does. Gambit: His dreams are stupid.