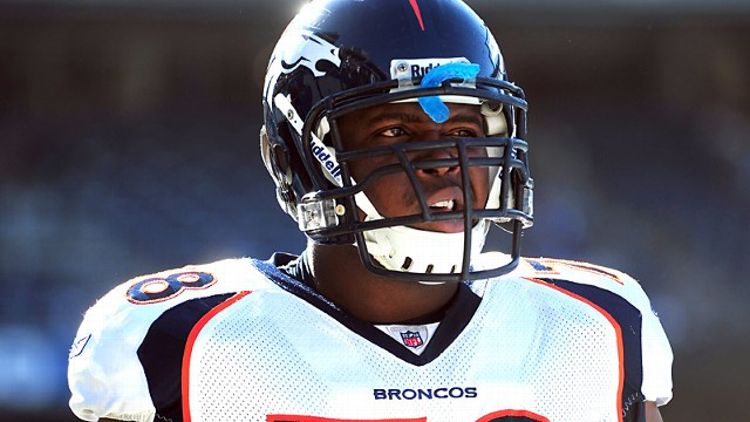 Last summer, Ryan Clady walked away from a five-year, $50 million contract that included $28 million in guaranteed money. Seeing a player turn down a massive deal in favor of trying to prove his own worth in a contract year isn’t new, but Clady’s choice came with additional risks. The 2011 season had been Clady’s worst as a pro. He led the NFL with 11 holding penalties, gave up 12 sacks (although that number is partly a product of the left-handed Tim Tebow scurrying around behind him), and seemed to confirm the concern that had crept up the previous year.

In April 2010, Clady had torn his patellar tendon playing basketball. He didn’t miss a game that season, but the opinion throughout the league was that Clady was no longer the nimble left tackle he’d been earlier in his career. Those doubts weren’t alleviated by what Clady did on the field in 2011. The hope for both Clady and his reputation seemed to be that he could show that this was merely a temporary dip, rather than the continuation of a downward trend.

And that’s exactly what Clady managed to do. Having Peyton Manning under center helps, but Clady was once again one of the top left tackles in the league last year. His prize was the five-year, $52.5 million deal with $33 million in guarantees that he signed yesterday, one day before the deadline for franchise players to work out a long-term contract.

Clady’s 2012 performance put Denver in a difficult negotiating position. He is a 26-year-old franchise left tackle, and with an entire excellent post-injury season on film, someone was likely to throw the same type of deal his way. Still, the prize for keeping him in town is steep, considering the market. The guaranteed figure is the second highest among offensive linemen in the league, after only Washington’s Trent Williams. Gosder Cherilus, a member of the same 2008 first-round class as Clady, got only $15.5 million in guarantees in his new deal with the Colts. Sebastian Vollmer’s new contract with the Patriots came with only $8.25 million guaranteed. Jake Long and all his injury worries got $16 million after his marathon physical in St. Louis.

Clady comes with his own injury issues (both the knee and a shoulder that required offseason surgery), but the difference is that he showed last year the type of player he still is in spite of them. And although Cherilus and Vollmer both played well a year ago, neither has flashed the high points or proven to have the consistency that Clady has shown. What the Broncos are paying is a familiarity tax. To them, Clady is a known commodity, and when it comes to shoring up the left side of an offensive line for the next five seasons, peace of mind is worth a little extra.

It’s worth even more when your team’s quarterback is a 37-year-old Hall of Famer with neck issues. Ideally, Clady will be the Broncos left tackle long after Peyton Manning’s career is over, but in the short term, solidifying the edge with one of the league’s best pass blockers is one way Denver can ensure they get the most out of whatever Manning has left. Manning helped with some of that $33 million, but mostly, Clady has himself to thank.