Appreciating the Underappreciated: In Praise of Brandon Marshall 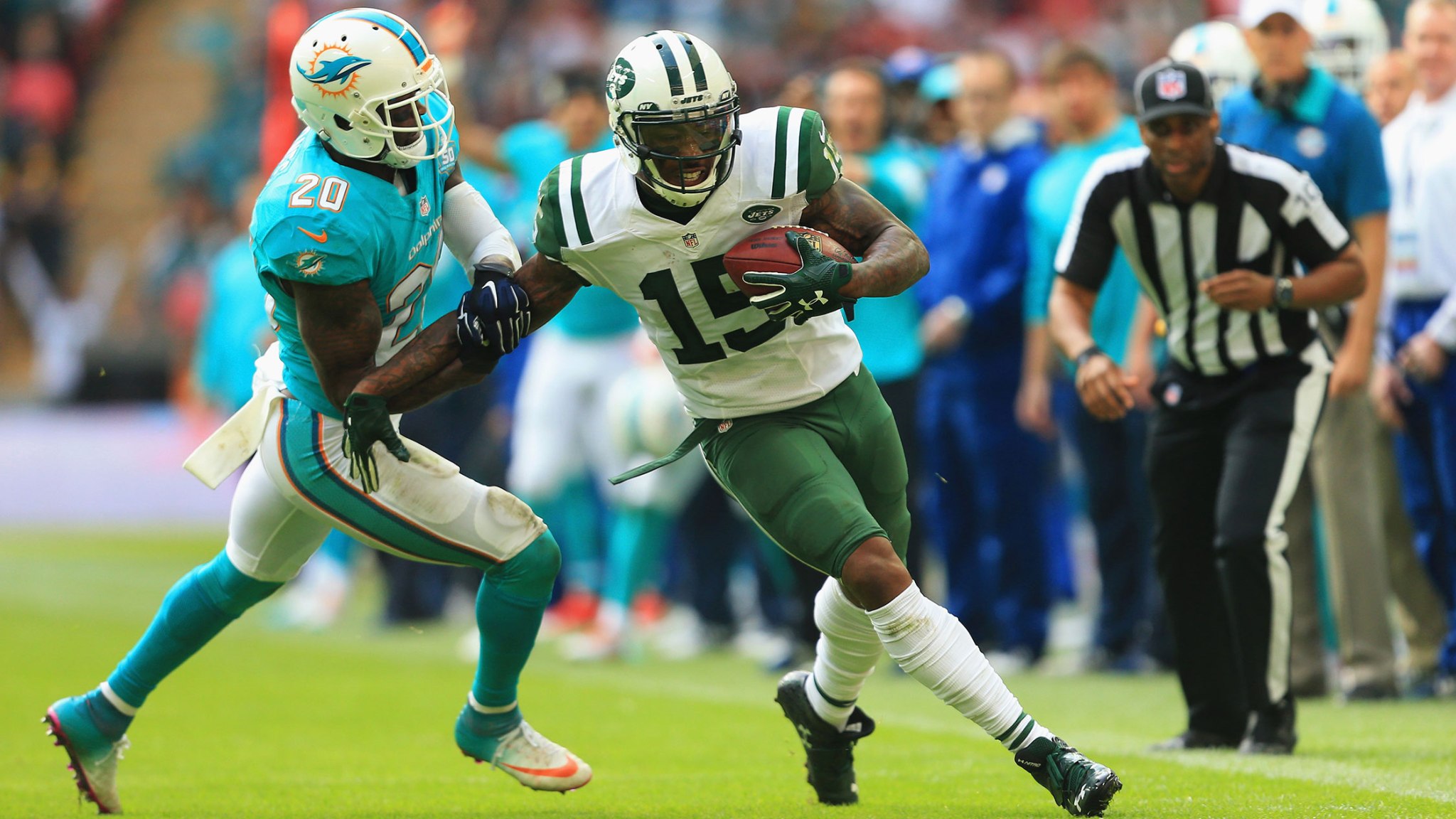 Taking things for granted is inevitably followed by a heart-sinking realization. You reach into the bag for another handful of chips and find only crumbs. Your city faithfully cheers on an NFL team every autumn Sunday until, poof, it’s gone. And sooner than you expect, you’ll be experiencing football without Jets receiver Brandon Marshall — even more reason to stop overlooking one of the most consistent pass-catchers of the last decade, who has opened the season in prime form.

AFC East teams have dominated this season’s conversation thanks to New England’s barrage after the Tom Brady un-suspension, Buffalo’s feistiness under Rex Ryan, and Miami’s complete collapse. Meanwhile, New York is quietly 3-1 and the top wild-card team in the conference. The Jets defense has been as viselike as expected and may tighten further with Sheldon Richardson returning from suspension after last week’s bye. But the team’s only reliable offensive weapons are bruising running back Chris Ivory and Marshall, whose 400 receiving yards are more than the rest of the Jets wide receivers combined. Marshall has been everything the Jets wanted, even if his career is no longer as sexy as the young talents who captivate with unrivaled athleticism and unbelievable potential.

Part of the reason we don’t think of Marshall more highly is that he has bounced around the league, never building up enough cachet with any one franchise to win the hearts of a fan base in the way Andre Johnson, Larry Fitzgerald, and Reggie Wayne did. Players aren’t often traded without some underlying issues, and Marshall has now worn out his welcome in Denver, Miami, and Chicago. In addition to locker room drama, he was arrested twice for domestic violence and once for a domestic dispute while playing for the Broncos.1 He has also been diagnosed with borderline personality disorder and has since become a mental health advocate.

Last year’s failed Percy Harvin experiment, however, didn’t prevent the Jets from bringing in another unwanted receiver to provide help alongside Eric Decker. They traded for Marshall in a busy offseason that also featured the free-agent returns of cornerbacks Darrelle Revis and Antonio Cromartie, along with the arrival of first-round defensive end Leonard Williams.

There is already a Hall of Fame logjam at wide receiver, and it won’t get significantly better even after Terrell Owens and Randy Moss inevitably don gold jackets, but Marshall at least deserves to be in the conversation for Canton. He’s rarely (if ever) thought of as an all-time great because he has usually been in the league’s second tier of receivers,2 but he deserves more credit for how long he’s spent time in that second tier: Marshall has five 100-plus-catch seasons, tied for the most in NFL history, and recently had a stretch of seven consecutive 1,000-yard seasons that ended last year.

That metronomic success has continued with the Jets this season:

Those performances place Marshall among the league’s top 10 in each category on a per-game basis. He has always used his 6-foot-4, 230-pound frame to box out defenders on slants and sideline comebacks, and this season, he’s converted 10 of his 14 third-down targets into first downs, the best percentage among the 38 players with at least 10 such targets. He doesn’t rely on speed but has the shiftiness (plus a stiff-arm like a cobra strike) to make the first defender miss, and his three touchdown receptions each demonstrate a facet of his all-around athleticism: Marshall used his height to pluck the ball over Browns cornerback Joe Haden’s outstretched arm on a goal-line fade, his strength to bully through two Colts defenders despite defensive holding, and his wide catch radius to snag a throw against the Eagles.

This shouldn’t be taken for granted. Athletes age like they’re strapped into the water torture device in The Princess Bride: The process is tolerable at first, but things get uncomfortable and the situation becomes dire. Then the floodgates open and your career is “mostly dead.” That point of no return is unique to each NFL position — running backs have notoriously short careers, while quarterbacks can play into their late thirties — but historical precedent suggests that wide receivers fade before turning 35. By then, the marginal gains of any veteran savvy are outweighed by the 0-to-60 acceleration of a younger alternative. It’s no longer enough to know precisely where to cut off a route or how much pressure can be applied during a push-off without being penalized.

Corroborating evidence can be found across the NFL this season. Andre Johnson was a nonfactor with the Colts before his revenge game on Thursday Night Football last week; Roddy White has eight catches for 115 yards in five games; and Reggie Wayne and Wes Welker3 aren’t even in the league anymore. There are exceptions to any rule — Larry Fitzgerald has reinvented himself by moving into the slot, and 36-year-old Steve Smith Sr. is simply not bound by rules — but Marshall’s role as a no. 1 receiver will likely come to a close within the next few seasons, even if he hasn’t yet lost a full step. It’s the ultimate reality of a physically demanding sport, the effects of which Marshall had been blessed to avoid before two broken ribs and a collapsed lung prematurely ended his 2014 season.

So appreciate what we have while it’s still here. Nobody could have expected greatness when Marshall was selected in the fourth round of the 2006 draft, one pick after Patriots kicker Stephen Gostkowski. But for the past eight-plus seasons, Marshall has been a steady target, consistently moving the chains and winning jump balls. His weakness is concentration — since his career started, he leads the league in drops by a large margin and has fumbled the most times of any receiver, including this year’s lateral to nowhere — but like many of the game’s greatest receivers, Marshall has been forced to carry the offensive burden. Want another reason to root for Marshall? The quarterbacks who have thrown him touchdown passes are Jay Cutler, Kyle Orton, Matt Moore, Chad Henne, Ryan Fitzpatrick, Josh McCown, Jason Campbell, and Jake Plummer.

Frankly, it’s incredible Marshall has reached 10,000 career receiving yards with that group, and it also helps explain why he’s never made the playoffs. To break that Takeo Spikes–like streak this season, he’ll need to do without a premier quarterback once again: Fitzpatrick has been his usual ho-hum self. Then again, taking things into his own hands is nothing new for Marshall, whose 21-catch game in Denver is still an NFL record.4

When Marshall snagged catch no. 21 over the middle, it was fourth-and-18 and Denver trailed with less than two minutes remaining. Unable to break a tackle, he lateraled to a trailing offensive lineman, who gained additional yardage but still came up short of the first down. Marshall walked despondently toward the sideline, the loss all but official, before a visible aha moment. As he hopped back toward the line judge to retrieve his record-setting souvenir, it became clear that, sometimes, even Brandon Marshall can forget how good he actually is.

A Dozen Developments From the NHL's First Week

53 Minutes of Madness in Toronto: An Oral History of the ALDS Inning That Broke Baseball