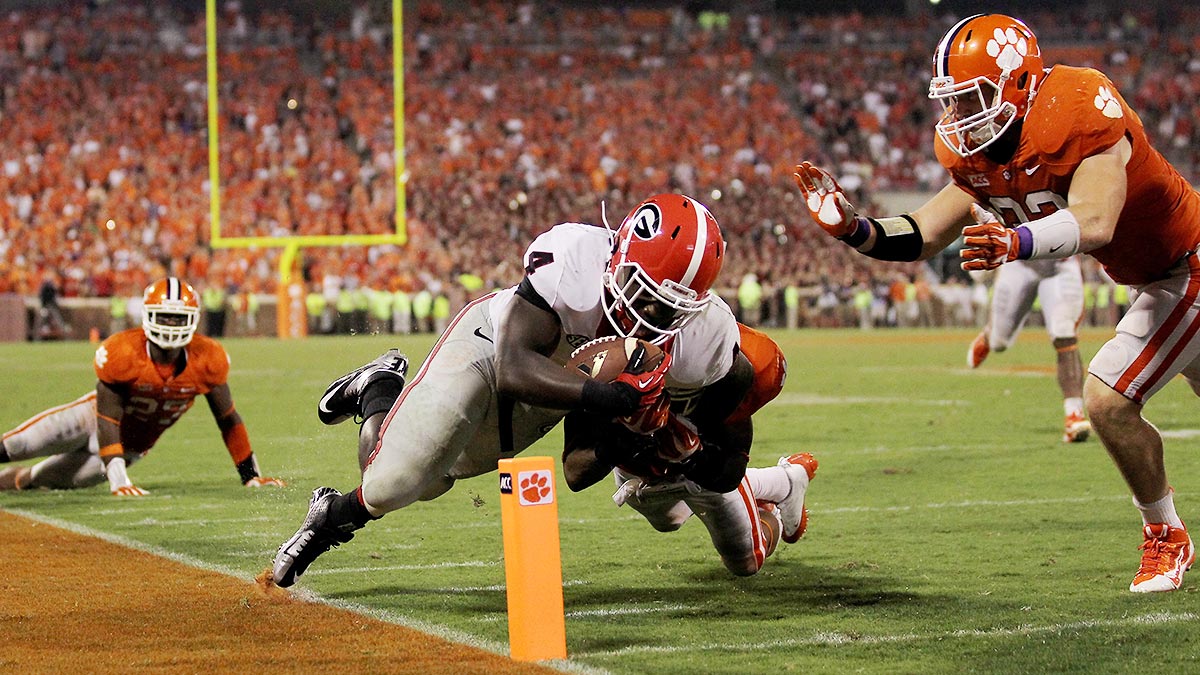 America’s beautiful game is three parts seedy underbelly, one part obscene money that we know about, two parts money that we don’t know about, four parts drive-time radio callers saying they’re still not sure Nick Saban’s the man for this job, and maybe five parts actual football. It’s presented to us over the span of four-ish months — and probably couldn’t bear a longer season for a whole bunch of reasons — and that’s never going to be enough time to get to see everything you want to see as the number of teams in the sport’s top subdivision nears 130, with each inhabiting its own discrete universe. You can dive and resurface until you get the psychic bends and never near bottom, never stop uncovering cat-toting head coaches and antique spittoons used as traveling trophies and endlessly innovative ways to batter and fry any imaginable foodstuff. You’ll die, eventually, without knowing so much. The beauty, in the meantime, is in filling your head with whatever your beer-helmeted heart desires.

Remember, as we wade into this, that we know nothing. Remember that the not knowing is its own sort of gift. Remember that the season is a months-long interlocking puzzle that regenerates every year, and that not even the guys on the field know exactly how it’s all going to go. Remember just how many things this game can be to you, and that it doesn’t matter one shred of half-melted RealTurf what it means to anybody else. Remember just how much of this is out of your control, and center yourselves in a universe where South Carolina’s mascot, a live bird, can consume red wine provided by the head coach’s personal winery, on national television. Drift freely in the unreality, without losing sight of the humanity.

Let there be light, from a thousand-thousand scoreboard bulbs. Let there be laughter and plenty, in the form of salad made from Doritos and served with a straight face. Let there be Les. Let’s dance. 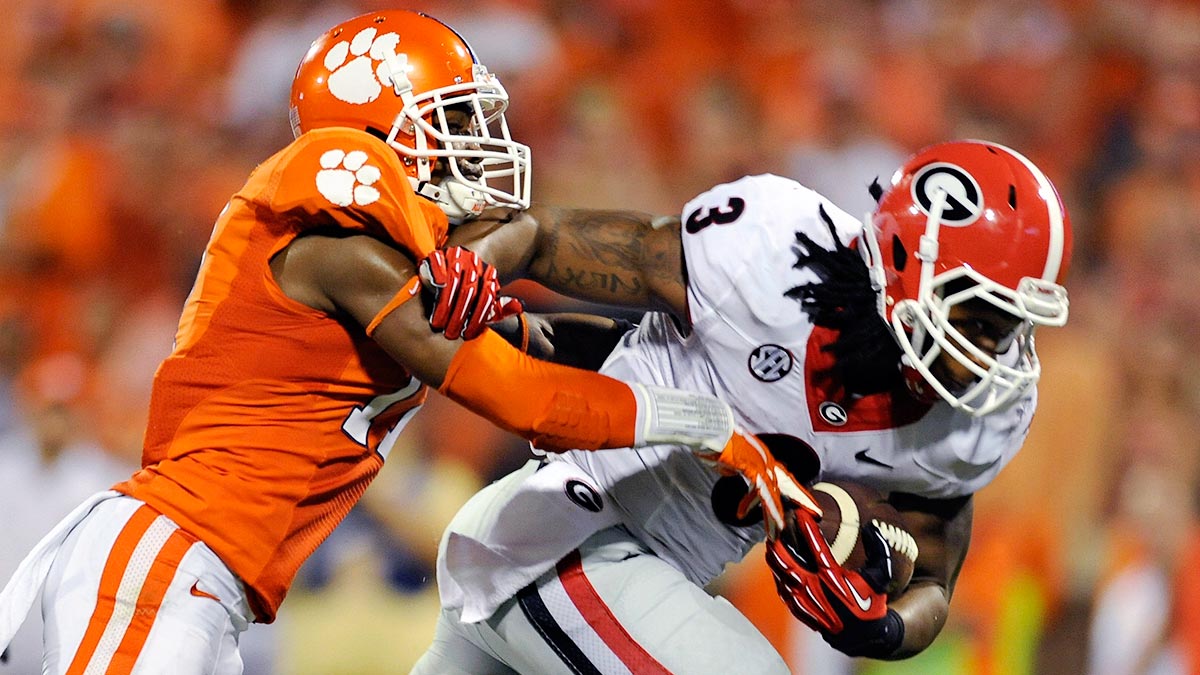 How to watch: Show up at Sanford Stadium in Athens this Saturday, or tune into ESPN or WatchESPN at 5:30 p.m.

Story line: When last we saw this dog-on-cat fight, in this same week last year, Georgia ranked fifth and Clemson eighth, and the Tigers came out with a three-point victory in an absolute firefight.1 Receiver Malcolm Mitchell’s ACL injury was the unknown herald of a bewildering series of injuries for the Bulldogs that would continue through the entire season. Clemson, meanwhile, would continue on undefeated until suffering the most thorough and vicious paddling we’ve ever witnessed in person, to eventual national champs Florida State, and would lose again to no. 10 South Carolina in the regular-season finale before beating Ohio State in the Orange Bowl.

Fast-forward eight months or so, and Georgia’s already missing two key receivers, Clemson’s lost its leading returning rusher, and the suspension/dismissal derby remains too close to call. With Cole Stoudt and Hutson Mason beginning their first full seasons as starting quarterbacks,2 pay special attention to Georgia’s first defensive outing under FSU import Jeremy Pruitt, and in particular to Clemson’s murderous defensive front and its efforts to contain Gurley and Keith Marshall3 on the ground. 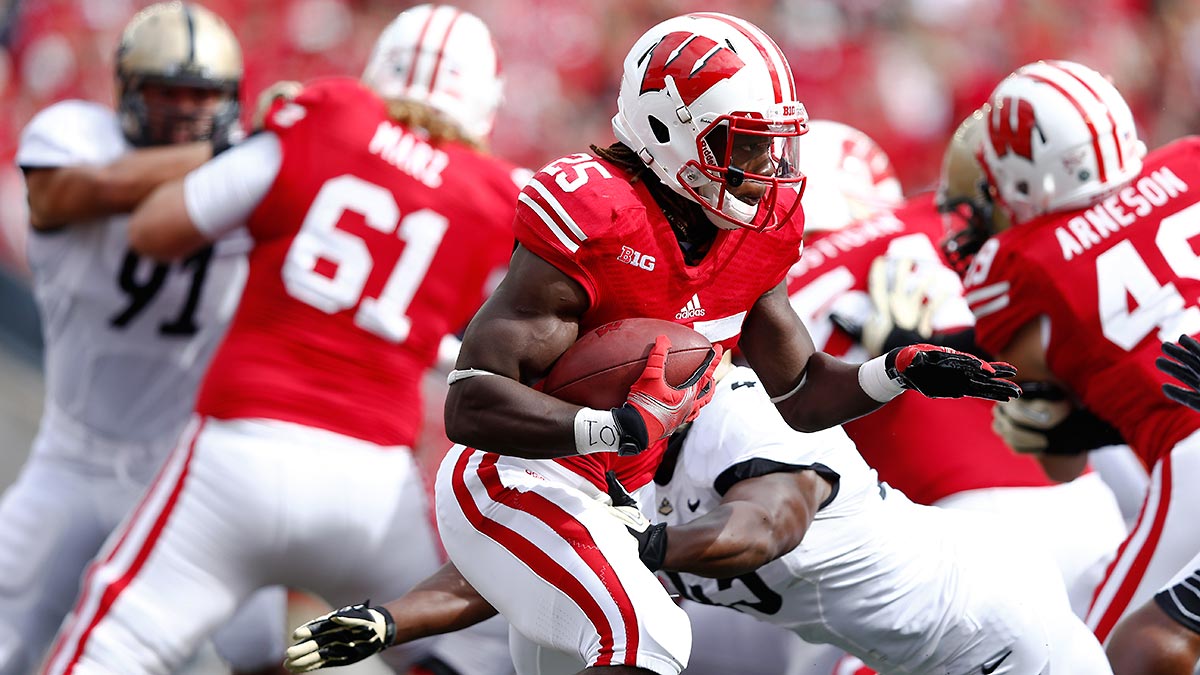 How to watch: Be at the Houston Texans’ stadium at 9 p.m. on Saturday, or stay with ESPN/WatchESPN after Clemson-Georgia.

Story line: Not to be outdone by those cake-eaters in Athens, this contest will feature three new quarterbacks (Les, you rake), the return of the Badgers’ hydra-inspired rushing attack, and a freshman tailback who’s popping up on Heisman lists before playing his first snap of college ball. Juco transfer and erstwhile defensive back Tanner McEvoy steps in over incumbent Joel Stave at quarterback, and he’ll have the privilege of handing off to Wisconsin’s latest talented tandem of runners (this year’s edition: Melvin Gordon and Corey Clement). LSU intends to split quarterbacking duties between freshman Brandon Harris and sophomore Anthony Jennings, at least for this first game, but the eyes of Baton Rouge will be upon true freshman running back Leonard Fournette, who’s drawn comparisons to Adrian Peterson, Michael Jordan, and now Tiger Woods from his coaches and teammates this offseason — comparisons so explicit that we have to believe there’s something there. With LSU replacing so much experience at quarterback and receiver, expect to see plenty of Fournette and Kenny Hilliard on the ground, running behind a Tigers O-line that returns a wealth of starting snaps versus a Wisconsin defensive front that’s missing more than its share of starters from last year’s squad. 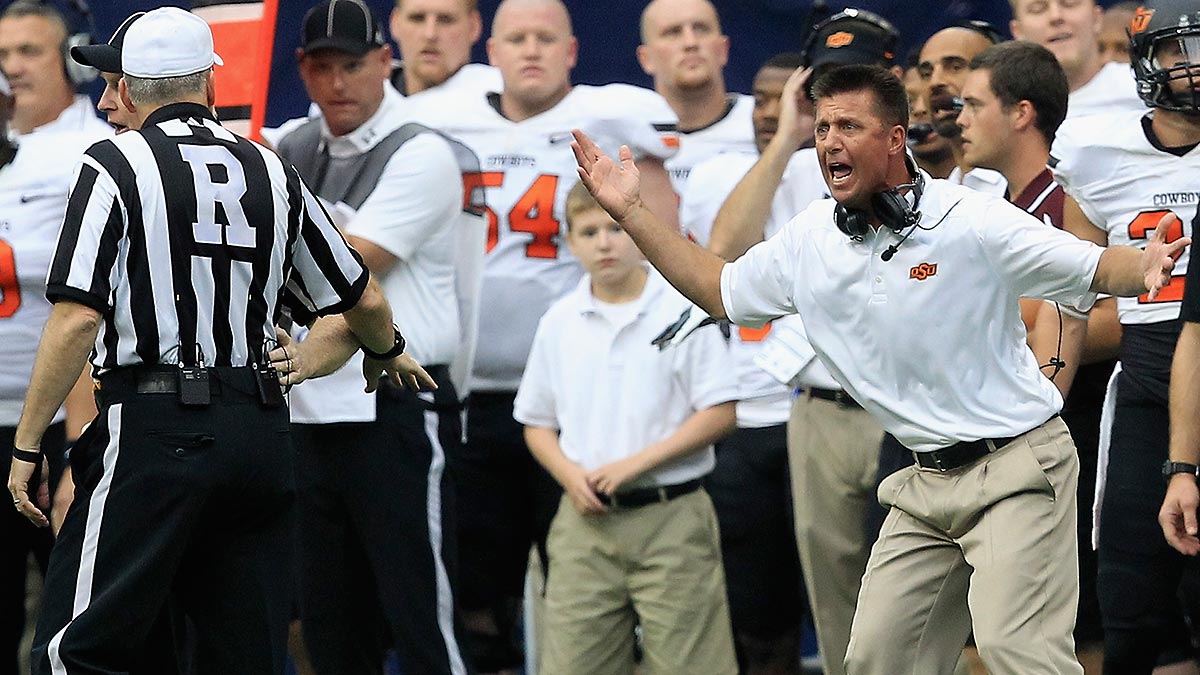 The game: no. 1 Florida State vs. Oklahoma State

How to watch: Make a pilgrimage to Arlington’s Jerry Dome and arrive by 8 p.m. Saturday, or flip over to ABC (coverage also available on ESPN3).

Story line: Harking back to our Big 12 preview: Thanks to gobs and gobs of starts lost to graduation and otherwise expired eligibility, it’s unfair to expect Oklahoma State to look like a complete team right away, however high our expectations for this program will be come November (and we do expect the Cowboys to contend with Oklahoma and Baylor for top conference honors). This is especially true against the defending national champion Seminoles, who return lots and lots of experience, have shored up some of last year’s perilous but never-exposed depth issues, and could be double-digit favorites in every game they play this year. (Of course, the last time we underestimated Oklahoma State, look what happened.) This would be a great game to watch near the end of the season; in August, it might get out of control in a hurry. Position matchup of interest: an FSU passing offense that’s learning to live without utter freak of nature Kelvin Benjamin at receiver versus an OSU secondary replacing its five most productive defensive backs from 2013. 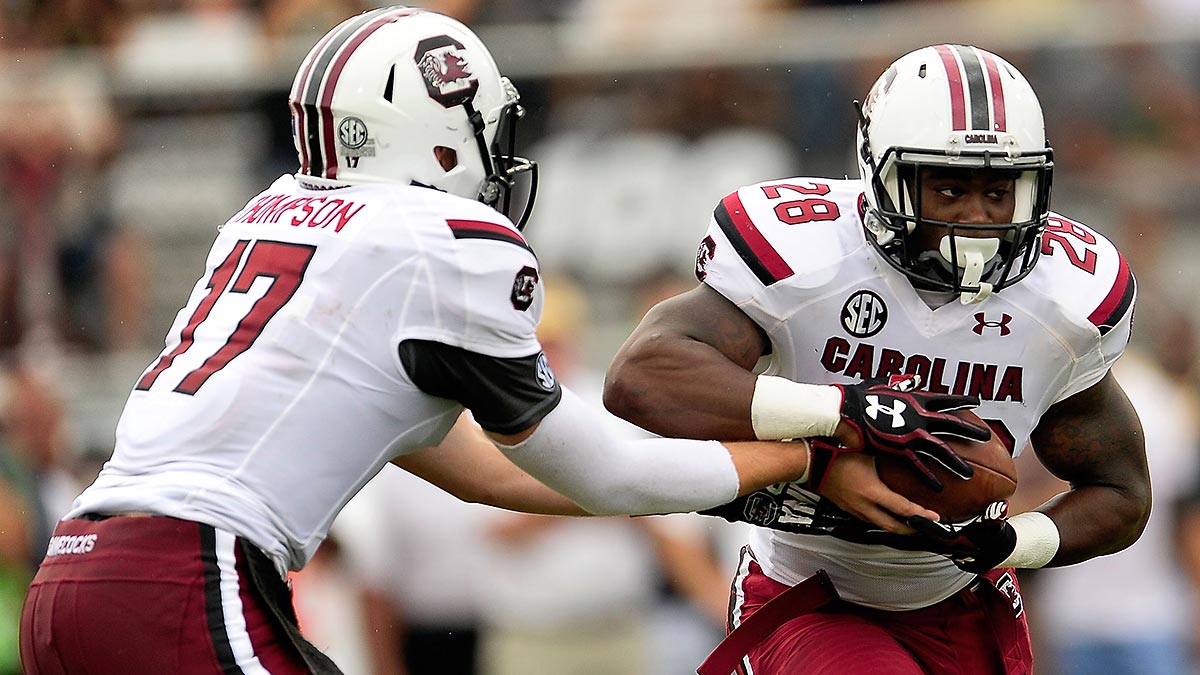 • No. 21 Texas A&M @ no. 9 South Carolina (Thursday, 6 p.m., SECN/WatchESPN). In terms of entertainment volume, this year’s opening Thursday is a high-value time block, headlined by the first meeting in school history between these new permanent cross-division rivals. If you weren’t initially high on the SEC’s pairing of A&M and SC for this purpose, please note that their respective fan bases do seem to be taking to it with natural ease:

#gamecock fans turn out to defend the State House. Shouting down the #Aggies. pic.twitter.com/PEYe07LT27

Matchup-wise, we’re a bit less concerned with the missing Jadeveon Clowney than with what the Aggies’ defense, not world-beaters to begin with and crawling with underclassmen up front, will make of a deeply experienced Gamecock offensive line and one Mike Davis, even if he can’t go full speed.

Intangibles note: Carolina, no stranger to double takes on defense, ups its “hang on, which one?” game this year by starting a pair of half brothers, both named Gerald, in the same position group.

• Boise State vs. no. 18 Ole Miss (Thursday, 8 p.m., ESPN/WatchESPN). Lots of mysterious moving parts to track in this contest between a Mississippi team that’s recruited like gangbusters but is probably still a little ways off from competing with the class of the SEC West and a Boise team coming off a down season and operating under a new head coach. Who’s ready to watch Robert Nkemdiche run around with an opponent clinging to each leg like toddlers at a church dance?

• Colorado State vs. Colorado (Friday, 9 p.m., FOXS1). The Rams finished 2013 with twice as many wins as the Buffs, but Colorado’s won three of the last four at Mile High. Last year’s game featured a 74-yard punt return and 53-yard fumble return for scores.

• UTSA @ Houston (Friday, 9 p.m., ESPNU/WatchESPN). Of the three new college football stadiums opening this year, Houston’s will be the first to host its debut game.

Highlights from a rich Week 1 undercard.

North Texas opens its season at UT. McCarney, Strong and Texas DC Vance Bedford all won a national title together at UF in 2008.

The Charlie Strong era begins with a fresh start for David Ash, who’s trying to reassure those of us who’ll be watching like nervous mother hens every time he takes a hit. (Guilty.)

• Arkansas @ no. 6 Auburn (Saturday, 4 p.m., SECN/WatchESPN). Why, exactly, are we (society) making these coaches pretend they don’t want to food fight? What’s a rivalry without a little ill will? Round 1 of Malzahn-Bielema was an utter delight; bring on Round 2 immediately, please.

• West Virginia vs. no. 2 Alabama (Saturday, 3:30 p.m. ET, ABC/ESPN2/WatchESPN). As mentioned in our Big 12 preview, we still think the Tom Bradley hire will be the key to West Virginia’s season, and that he’ll pay big dividends in off-field work as an associate head coach. But first Bradley must, in his capacity as D-line coach, shape up a unit that returns plenty of snaps and starts but that also allowed close to 4.5 yards per carry last season. His first test comes against a team fielding Derrick Henry and T.J. Yeldon. Meep.

• No. 5 Ohio State @ Navy (Saturday, noon, CBSSN). NAVY FOOTBALL’S 12-0 SEASON BEGINS WITH A RED, WHITE, AND BLUE DEFEAT OF AN OHIO STATE BUCKEYES SQUAD DISORIENTED AFTER LOSING ITS CAPTAIN AND STAR QUARTERBACK TO A SHOULDER INJURY. Or OSU rolls on the strength of overwhelming talent. One or the other: The new guy’s not bad. 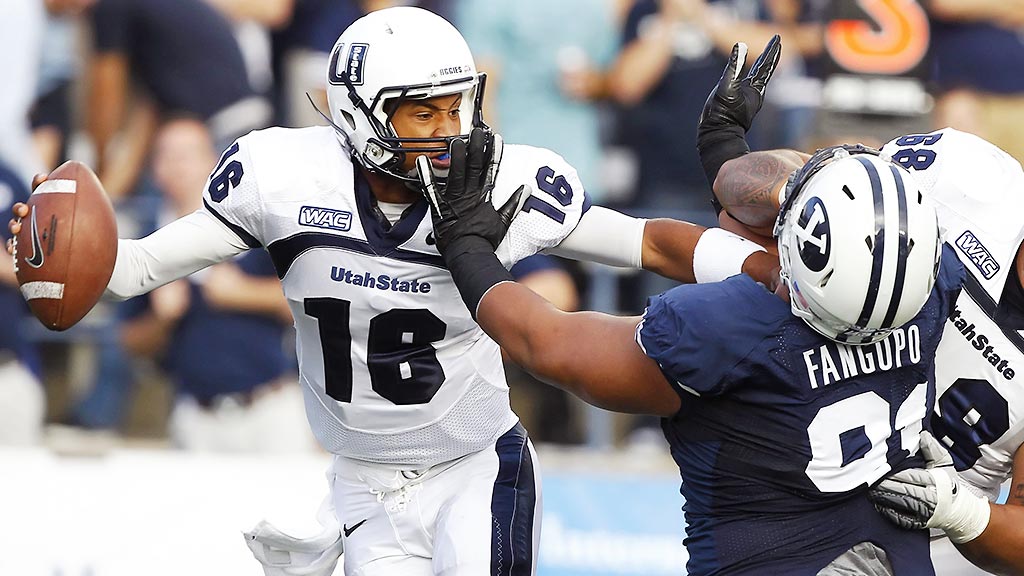 • How long can I, the discerning viewer, keep this streak of uninterrupted viewing going? Week 1 stretches from Wednesday to Monday without a single football-free day. Sunday prime time brings Chuckie Keeton and Utah State’s formidable defense to a Tennessee program replacing every starter on both lines (7 p.m., SECN/WatchESPN), followed by the inaugural game at no. 10 Baylor’s new stadium, where the Bears will host SMU (7:30 p.m., FOXS1). The solo Labor Day game is Miami (now with more Duke Johnson!) at Louisville (now missing DeVante Parker!)

• What is that thing in Ireland? That’d be Penn State playing Central Florida at 8:30 Saturday morning (ESPN2/WatchESPN). The Knights and Nittany Lions defied the will of a volcano to alight on the Emerald Isle; here’s a helpful Penn State preview that breaks down both UCF and the righteous wrath of Mother Nature.

• Does this look infected? No, that’s just an Appalachian State–Michigan rematch at noon on Saturday (ESPN2/WatchESPN). Keep an eye out for swelling.

Girls can drool over Ryan Gosling as much as they want. All i know is he was a liability at DB in Remember the Titans. #He'sTakinAllenOut

There is wisdom to be found in youth. Don’t ever forget.

An earlier version of this file implied that this photo op took place after the Orange Bowl. It was actually after the Buckeyes’ loss in the Big Ten championship game. Our apologies to the the victors, Michigan State.

Triangle All-Stars: Bo, Jack, and the College Football Kings of Our Hearts