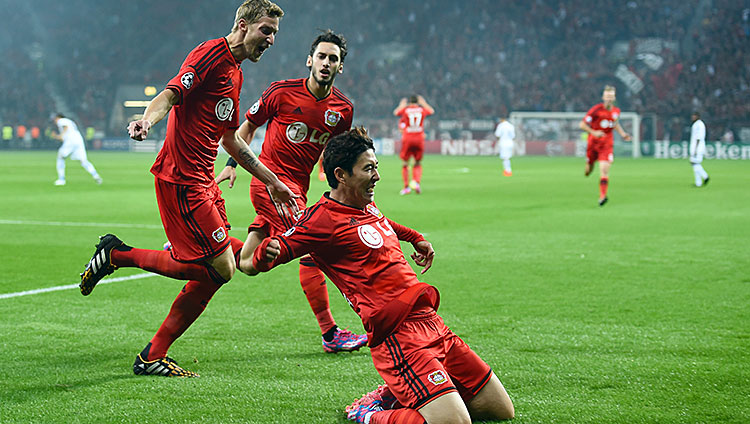 Are you looking for a Cinderella team to follow through this year’s Champions League? You feel burned-out on previous darlings Borussia Dortmund and Atlético Madrid, after their respective transformations from underdogs to perennial title contenders? Well, here are three different possible bandwagons to join, depending on just how Cinderella-y you want your Cinderella to be.

Throw out your Sven Bender jersey, and pick up a Lars Bender jersey. Bayer Leverkusen is here to steal your heart away from Jürgen Klopp’s Dortmund side. They press like a 9-year old playing FIFA, after a Pixy Stix binge. Stefan Kießling has nine goals in five matches across all competitions, to start the year. Bayer scored the fastest goal in Bundesliga history, earlier this week, in a 2-0 win over Dortmund. They then followed that up with a 4-0 shellacking of Copenhagen to advance into the Champions League group stages, where they will terrify Monaco, Benfica, and Zenit.

Leverkusen’s evolution from solid Bundesliga side to must-see football can be attributed to newly installed manager Roger Schmidt. His trademark tactic is pressing deep into the opponent’s half. Very, very deep. A tactical look at the job he did at Red Bull Salzburg, from Spielverlagerung, says that what Schmidt has implemented is called “deep Angriffspressing.”

This means that defensive pressure starts with the forwards on the edge of the penalty area. The team doesn’t try to harry the goalkeeper, but rather focuses on shutting down forward passing lanes from the center backs, attempting to steal the ball in dangerous areas. This works as both an offensive and defensive tactic, and will be brutally hard for teams that aren’t seeing Leverkusen play, week in and week out, in the Bundesliga.

Leverkusen is, for lack of a better phrase, tactically cool. They combine situational pressing with counterattacking, much like Diego Simeone’s Atlético side, but they do so with a high-risk, high-reward ethos. Their system is so intense, Schmidt’s Red Bull team drew doping suspicions last year in Austria. Google Translations of Austrian match reports all too frequently feature the word “despair,” and based on what we’re seeing this year, there’s reason to believe that’s what opponents of Leverkusen will be feeling all too often.

This side is for you if: you believe in scoring early and often and you want to be trendy.

Speaking of Red Bull Salzberg, they are out of the competition after losing to Swedish champions Malmö FF. Malmö went through thanks to this this obscene volley from Magnus Eriksson:

Malmö is the first Swedish side to make the Champions League group stage since 2000. The team is mostly young, and mostly Swedish, with prodigal son Markus Rosenberg bucking the youth trend and Ghanian midfielder Enoch Kofi Adu the lone non-Scandinavian member of the starting lineup. They are in deep trouble, drawn against Atlético Madrid and Juventus in Group A. Rosenberg is the sort of goal scorer who can make things tough on opponents, but advancement seems unlikely. That said, given where Malmö has been, they’re an interesting side to keep an eye on going forward.

Above all else, Malmö is known as the home of Zlatan Ibrahimovic. He and the club were the subject of the captivating 2002 Swedish documentary Vägen tillbaka – Blådårar 2. The film is available with English subtitles and is a must-watch the next time you have 45 minutes to kill.

It tracks Malmö and their fans as the team fights to return to the Swedish top-flight after a shocking relegation in 1999. The film is also the story of a 19-year-old Ibrahimovic. Imagine if Hoop Dreams was maybe less thorough and heartbreaking, but happened to luck into tracking Kevin Garnett’s senior year, and you have an idea of what’s in store for you.

There’s a moment in the film when a Malmö supporter says of Zlatan, “He must succeed. If he doesn’t succeed, I would feel ruined. Then the world would be unfair. He must succeed.”

Watching it now, knowing that Zlatan, unlike so many other prodigies, did succeed, makes it clear where Malmö sits in the footballing world. As with the Dutch side Ajax, where Zlatan first became a superstar, Malmö’s European stature is a casualty of the consolidation of power in modern football. Malmö is a club that was the runner-up for the European Cup in 1979. They regularly produced international-level talent. And yet they’re unable to bring in any significant foreign talent. Success now defined by talent creation, and the role the club plays in the community. To have created Zlatan was a success for Malmö. Making the Champions League group stage in 2014 is gravy.

This side is for you if: you love Carolina blue, you’re into throwback excellence, you are Zlatan.

And then there’s Ludogorets Razgrad. I’d be a first-rate liar if I said I had any meaningful tactical insight on the Bulgarian side. I know that, coming off of a strong Europa League run last year, Ludogorets did not have an easy path to the group stage, facing Serbian giant Partizan Belgrade before Steaua Bucuresti. And I know they have a live eagle named Fortuna as a mascot. But this is your ultimate Cinderella team.

The team was founded only 13 years ago and only became a top-flight club in Bulgaria when Huvepharma CEO Kiril Domuschiev injected money into the team after acquiring it in 2010. What is Huvepharma? One of Bulgaria’s largest pharmaceutical conglomerates, of course. It makes feed additives and antibiotics for animals that are marketed in the U.S. Ludogorets now gets to go to the Bernabéu and Anfield, where they will play the two most decorated teams in this tournament’s history.

But more interesting than veterinary antibiotics or calculating Ludogorets’ odds of sneaking into the knockout stages is how they snuck past Steaua. Down a goal on aggregate, in the 89th minute of regulation, superbly named Brazilian substitute Wánderson struck a volley to force extra time. Then, with one minute remaining in extra time, goalkeeper Vladislav Stoyanov received a second yellow card, leaving Ludogorets, who had already used their final sub, facing the prospect of a shootout with no goalkeeper.

Not only did Moti score the first penalty himself. Not only did he save two penalties. He also redefined the hand-jive goalie distraction game for generations to come.

When Cosmin Moti went to bed on Tuesday, he had no idea that when he woke up, his life would change forever. (Note: He might have suspected it was possible, as he was aware he would be playing in his first Champions League playoff, but bear with me here.) Is that not the magic of existence? Moti’s heroism goes beyond merely blocking soccer balls. Moti is a living reminder of the infinite nature of humanity. In 20 years, when the forests of northeast Bulgaria have produced a golden generation of footballing Cosmins, remember this week, and remember your own potential to be like Cosmin Moti.

This side is for you if: you’re into heroism against all odds and/or veterinary pharmaceuticals.