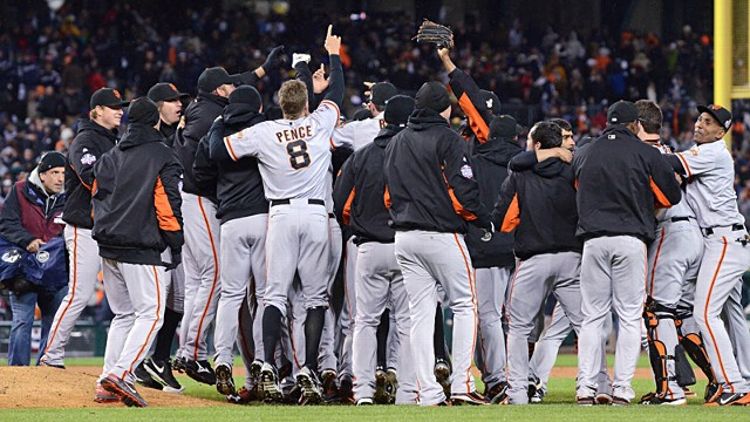 I spent Game 5 of the 2010 World Series lying on the floor of my apartment, staring at the ceiling and listening to the San Francisco Giants’ local radio feed over the Internet. I was 3,000 miles away from the Bay Area and I wanted some connection to the feelings and rituals of childhood. I had first become a fan via the radio and all that it leaves to the imagination. If this was going to happen, I wanted to hear some familiar voices narrate the scene. As the Giants poured onto the field after the final out, longtime play-by-play man Duane Kuiper reflected on what the moment meant: “You can’t help but think that this group is celebrating for the Say Hey Kid … for Will the Thrill … celebrating for number 25 and celebrating for all you Giants fans, wherever you are.”

Lineage matters to the faithful, and I suppose that two World Series victories in three years is when you can reasonably start talking dynasty. But there’s still something strange and ephemeral about the Giants’ astonishing successes. It wasn’t that long ago that such a thing seemed impossible. The Giants came within eight outs (and a five-run lead!) in 2002 — and then Dusty Baker angered the baseball gods by taking Russ Ortiz out of Game 6 and inexplicably handing him the game ball as he walked off the mound (with a five-run lead!). That was as close as the Barry Bonds–Jeff Kent Giants got, and, within a few years, the memory of Giants teams built around brawn were impossibly distant, even if there were reminders everywhere. It was “number 25,” after all, who had been signed in 1993 as a statement-making gesture by a new ownership group intent on keeping the Giants in San Francisco. They built a gorgeous ballpark downtown and filled it with fans eager to see Bonds hit balls into the water.

It took a while in that post-Bonds era for the park to feel like something other than a cruel, stat-killing curse on Giants hitters. But its roominess was perfectly suited for strong pitching, and it’s always floored me that Matt Cain and Tim Lincecum rarely complained about the meek teams playing behind them — lineups heavy with aging veterans and minor prospects that threatened to finally prove general manager Brian Sabean an “idiot” after all. At best, maybe the Giants could remain competitive and occasionally play the spoiler. (It was never a tragic history, more one of missed opportunities. I still remember a documentary about the franchise’s history I watched and rewatched as a kid. I didn’t have the language for it at the time, but it felt sad that one of the Giants’ greatest triumphs of my lifetime was blocking the Dodgers from the playoffs in 1982.) But the plan revealed itself as a proper, working plan in 2010, when Bruce Bochy mixed-and-matched his way to a historic, fluky-feeling World Series victory.

That team was all about getting “weird,” and this Giants team had a similarly singular vibe. But what was strange this time around was how late in the season the team discovered their identity. In mid-August, the Giants lost Melky Cabrera to a 50-game PED suspension, and the Dodgers, spying a clear path to the division title, radically retooled their lineup. But the Giants closed ranks, went on a tear, and won the NL West by a comfortable margin. There was something for everyone: homegrown talent (quite literally, in the case of childhood Giants fan Brandon Crawford), a freak in a funk (Lincecum), an awesomely humble human-interest story (Ryan Vogelsong), a redemption narrative (Barry Zito), role players given a chance to shine (Angel Pagan, “Greg White”), the aging veteran looking for one last shot (Marco Scutaro), even Lil Wayne’s unlikeliest homie (Ryan Theriot).

The Giants’ victory last night only makes 2010 seem stranger. Buster Posey was the only starting position player remaining from the last championship. Former ace Lincecum came out of the bullpen this time around, and injured closer Brian Wilson was little more than a bearded hypeman. I know it’s reductive and precious to spin a narrative of teamwork, chemistry, collective striving, etc. around whichever team wins the World Series, and anyone who once used “oneflapdown” (Jeff Leonard explains the origins of his dead-arm home run trot) as an e-mail password is far from a clear-eyed nonpartisan. But there are times when a team on a hot streak can become an emblem of everything you’ve ever believed in. The same postseason A-Rod sulked on the bench, it was inspiring to watch Lincecum, a mutant temporarily unable to harness his powers, jog out from the bullpen and treat this “demotion” with a renewed swagger. It was the first time in a while that the mystical Zito, so blank-faced and affectless these past few years, registered something resembling emotion. I’ve been particularly fascinated by the tweaker mannerisms of Hunter Pence, who plays with the scrappy intensity of someone half his size. I’ve never seen a late-season acquisition ascend to the status of frat president so quickly. But for some reason — and it surely wasn’t his slugging — his coaches and teammates took to him, congregated around him and treated his bug-eyed pep talks like religion.

I listened to all the NLDS and NLCS elimination games on the radio. I watched last night’s game on television, again 3,000 miles (and a hurricane warning) away from the Giants’ backyard. My friend Joseph, who also grew up in the Bay Area, came over, and we spent the first seven innings debating politics, probably as a way to live outside of the game’s tension. But for all its unpredictability, the game still offered a steadier arc than everything else we found ourselves talking about, and there was a comfort in that. I switched to the radio just as Sergio Romo heaved that last, decisive fastball toward Miguel Cabrera. The past couple weeks I’ve been thinking about Kuiper’s call in 2010, his need to remind us of the historical lineage each new Giant enters into and each fan carries forward in word and deed, ritual and superstition. (Or: why I ate 14 California Pizza Kitchen Thai Chicken frozen pizzas in a 21-day span in October 2002.) It’s not the thing that first draws you to sports as a kid, but it’s this lesson of intertwined fates and collective endeavor that drags into adult life with the most potency. The possibility that a bunch of strange, un-alike people might accomplish something really special together. None of this is guaranteed, and it’s too early to start thinking about next year.