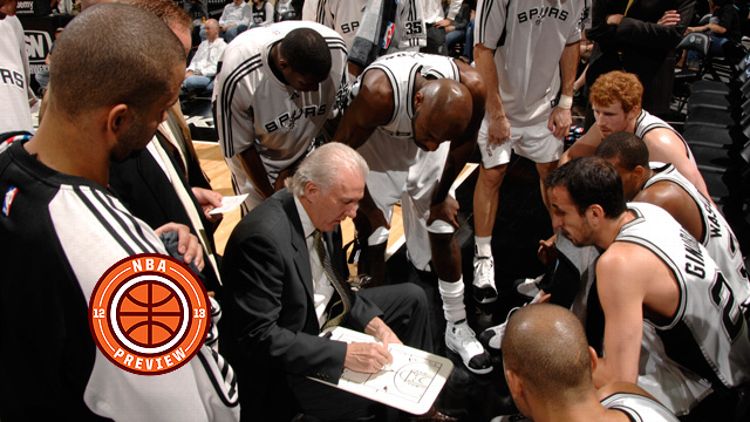 Despite Sam Presti providing a shocking twist with the James Harden trade Saturday night, there still remain five teams entering the 2012-13 season with serious championship credentials. As tipoff continues to inch tantalizingly closer, here’s a guide to the go-to sets for each member of this quintet of contenders.

How It Works: With Tim Duncan no longer capable of controlling a game from the low post, the Spurs switched to a pick-and-roll-centered offense that calls on Tony Parker to take on the role of primary creator. The drag action is designed to help free Parker to attack the opposing defense when it is at its most vulnerable — in transition.

When a Spurs player secures the rebound, he finds Parker, and the team tries to push the ball up the floor as quickly as possible. One of the trailing bigs (usually Duncan) looks to set a ball screen on Parker’s defender early in the possession.


Why It’s Effective: Teams try to score early in the shot clock for a simple reason. If you move the ball down the court quickly, there’s a greater chance that the defense will either be short-handed or not yet set. As Duncan moves to set the screen, only four Thunder players are in a position to defend. That confuses the responsibilities players have in help defense and allows Parker to make an unhurried elbow jumper. 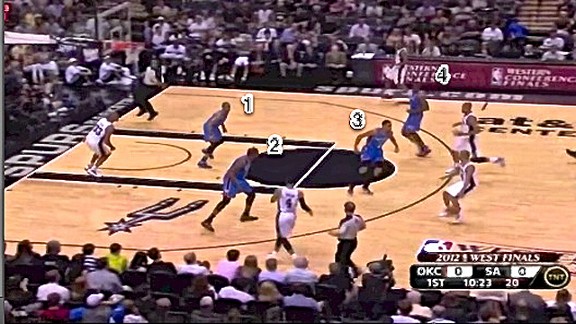 Even in situations where the numbers are equal on each side, having fewer than five defenders allows more freedom to operate. Additional space for a quick and clever finisher like Parker is big trouble for a defense. With Duncan and Manu Ginobili another year older, the Spurs will rely on Parker — and the drag screen — more than ever.

How it works: This action begins with the Lakers in their four-high, Princeton-style alignment. Kobe Bryant and Metta World Peace are positioned lower on the perimeter, while Pau Gasol stands just off the right elbow.

The big offseason acquisitions for the Lakers will play a huge role in this set, as Steve Nash receives a ball screen in the slot (the area on the perimeter just to the outside of the top of the key) from Dwight Howard. As Nash comes off, Howard dives to the rim and forces the help defense to collapse on him while Bryant moves slightly higher onto the perimeter behind Howard’s roll.

Nash’s options out of this are limitless. He can either hit Howard on the roll, swing the ball quickly to Gasol (who has plenty of options if he were to get the ball), or hit Bryant behind the play.

Why It’s Effective: No matter how opposing defenses approach this play, they will usually come up short. Marcus Thornton of the Kings is just the first player — and he won’t be the last — tasked with the responsibility of having to jam Howard on the roll (to avoid a lob dunk) while also recovering to an open Bryant after the defense rotates. 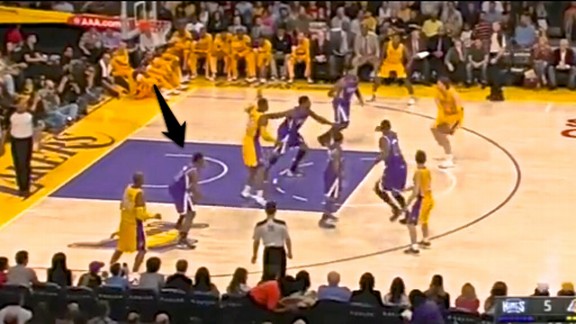 Thornton essentially does neither (he plays for the Kings, after all), and the Lakers get the best-case scenario: a highlight-reel dunk. The best thing about this play is that the four stars in purple and gold are put in positions to do what they do best.

Depending on the coverage, either Nash and Gasol will be asked to read the defense and execute a pinpoint delivery. Bryant will be left with open jumpers (remember the Olympics?) or the chance to use his clever series of fakes on a closing defender. Howard, meanwhile, will receive plenty of opportunities to catch and finish near the rim (something he tends to be quite good at).

How It Works: Whether it’s by a cut, a screen, or a back-down, via the dribble, in transition, or after a sideline out-of-bounds, Erik Spoelstra has designed a number of ways to get his star player prime real estate down low to attack overmatched defenders.

Why It’s Effective: In a word: James. His combination of size, speed, power, and skill make him virtually unguardable down low (or anywhere, really). If a smaller wing is assigned to him, James will power into the paint for a jump hook. If a bigger, slower defender receives the task, he can face up and blow by him with a quick first step. But the part that makes this action so devastating isn’t how easily James can score — it’s his ability and willingness to pass.

Thanks to Heat management surrounding James with a roster full of shooters, double-teams are as unappealing a proposition for opponents as letting James run rampant in a one-on-one matchup. If another defender comes to trap or flood the strong side of the floor, James will read the situation and adroitly move the ball to the open man.

The best hope against a James post-up? Catching the Heat on a cold shooting night.

How It Works: The most basic play in basketball needs just a brief explanation. Thunder head coach Scott Brooks simply puts the ball in the hands of his best player at the best spot (the middle of the court), spreads the floor, and lets him go to work.

Why It’s Effective: Isolations generally tend to produce middling results, but Durant might be the exception to the rule. Thanks to his ability to rise up and drill 25-footers, Durant forces defenders to stick tight to him, deep into 3-point territory. This creates loads of space for him to exploit. 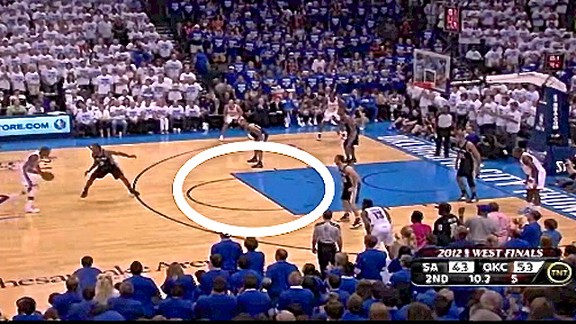 Without Durant’s ability to use his smooth stroke off the dribble, that space near the free throw line would be all but gone due to a sagging defense. He’d also lose his ability to attack effectively off the bounce. However, because Durant pulls his defender farther from the hoop, he creates better angles to penetrate to highly efficient scoring areas (both elbows, the nail, and the middle of the paint).

Though Durant can definitely improve as a playmaker, the top-of-the key iso will still be OKC’s go-to action at the end of quarters and games. And despite the rise of empirical data shedding light on the inefficiencies of hero-ball ploys like this, there will still be plenty of anxious coaches when the Thunder call this play with a game on the line.

How It Works: In an effort to get two of his primary offensive playmakers involved at the same time, Doc Rivers decided to pair them together. Over the years, the play was designed mostly with the idea of getting Pierce an open shot on the pop or forcing the defense into a switch that Pierce could exploit. But with Rondo being counted on to provide a bigger scoring punch this season, expect the point guard to look to score from this play by attacking the rim.

Why It’s Effective: This set is centered on Pierce’s ability to relocate after screening to hit an open jumper. This movement forces every defense to employ a “stay-attached” coverage, which requires Pierce’s defender to stay in contact with him while simultaneously hedging on Rondo. This is a fine line for a defender to walk. Sticking too close to Pierce lets Rondo turn the corner unimpeded, but giving too much help on the hedge creates loads of separation for Pierce to exploit.

In the first clip, Pierce is able to turn a small closeout from Andre Iguodala into opportunity. On Pierce’s catch, Iguodala is still recovering to him. 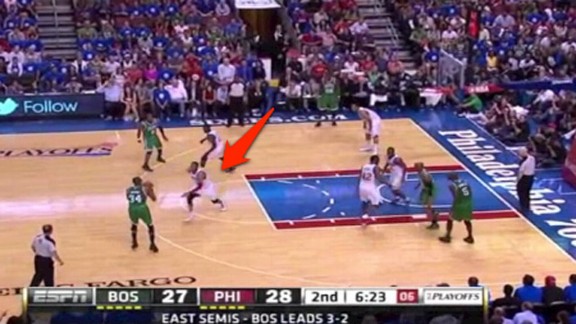 It may not seem like a huge advantage, but Iguodala sticking with Rondo for even a brief moment is enough for Pierce to use a shot-fake attack and get to the nail for a jumper.

The flip side can be found in the second clip, in which LeBron James is too focused on getting back to Pierce. His hesitancy to hedge allows Rondo to turn the corner freely and head toward the rim. 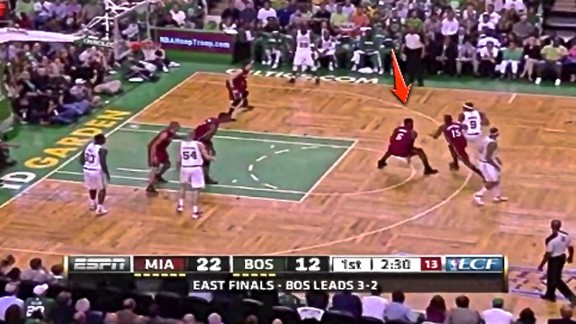 With Ray Allen now in Miami and Kevin Garnett being asked to anchor the defense, expect Boston to employ this action quite a bit as they look to make one last Finals push.

Arsenal at the Crossroads