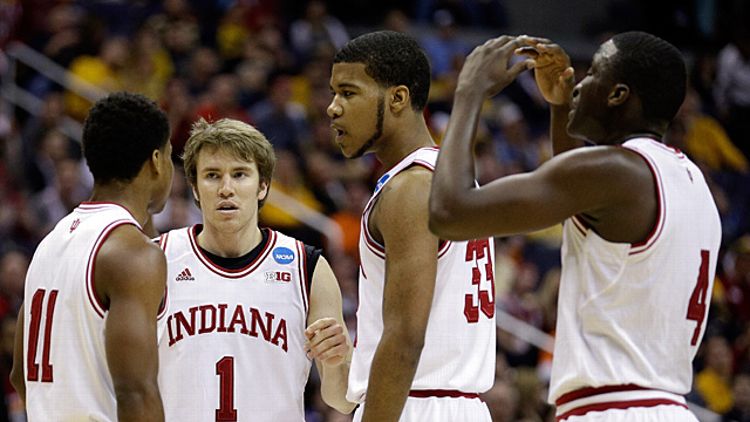 The End of the Great Hoosier Debate

Trying to guess the legitimacy of the Indiana Hoosiers has been a season-long brain teaser, and I’ve consistently taken the “overrated” side of the debate. Every time it looked like I might be right, as with the near-loss to Georgetown and the losses to Butler, Wisconsin, and Illinois, the Hoosiers would do something spectacular, like decimate North Carolina or soundly beat Ohio State or Michigan State on the road. And each time they began to look like a dominant team bound for a title, there’d be a worrisome hiccup that made you think they couldn’t win six critical games in March.

This Hoosier season will remain a mystery. I’d like to gloat and say, “I told you so” on this one — because, actually, I did tell you so – but all we really know is that the one-and-done format of the tournament is very cruel, that it doesn’t always show us the truth about a team, and that, yes, Indiana ran into a terrible matchup.

Before this game, there was a lot of old, wrongheaded thinking going around about Syracuse’s zone defense. Indiana fans, and even a few national pundits, seemed to think that facing a zone meant the Hoosiers would have a slew of wide-open 3s, and their terrific percentage – fourth in the country – would doom Syracuse. It’s true that a typical zone defense might allow open perimeter shots in favor of stopping penetration or containing post players, but that’s not what Jim Boeheim is running at all. With quickness all over, and length on the wings and underneath, the Syracuse zone actually makes it very, very difficult to find open 3s. The Orange hold opponents to the third-lowest percentage in the country from deep. Hakim Warrick’s famous block in the 2003 title game was a perfect example of the system’s key principle – athleticism and height allow for quick recovery, closing off what seem like great scoring opportunities and making offensive execution a puzzle.

That’s what we saw last night. Indiana looked lost, went 3-of-15 from beyond the arc, and finished with its lowest point total and worst offensive efficiency of the season. Possession after possession went by without any progress. The Hoosiers were so hurried that they missed layups, committed turnovers on 27.7 percent of their possessions (again, a season-high), and generally seemed befuddled. Also, if we’re being honest, it takes a great coach to game plan for the zone in a week’s time, and Tom Crean probably wasn’t the man for the job.

Syracuse tends to look inconsistent in the Big East, weak spells mixed in among the impressive results (like beating Louisville on the road), but the thing people forget during tournament time is that Big East coaches have often had years to prepare for the zone. Asking Crean to figure it out in five days? It’s almost unfair, though the blame isn’t entirely on his shoulders.

There are a few ways to beat the zone. The first is by going against conventional wisdom (“don’t dribble against a zone!” is something I heard over and over as a kid) and using your guards to penetrate. If they can reach that vacant spot in the middle and draw the defense, opportunities start to open up. But Jordan Hulls and Yogi Ferrell weren’t capable of that against Michael Carter-Williams and Brandon Triche, and when Victor Oladipo drove, he seemed to have tunnel vision for the rim. Which makes sense, when you think about his athleticism, but a little patience might have exposed some of the zone’s weaknesses and served Indiana better in the long run.

Teams can also run their offense through the high post, which accomplishes the same thing, but in that case it helps to have two big men who can pass to each other and spot shooters on the wings (maybe Christian Watford should have been used in that role last night). Cody Zeller received the ball on the high post a few times, but it was usually followed by a headlong charge to the rim. That was just fine with the Syracuse interior defenders, who bodied him on the way and waited for a help defender to swat his shots. Again, the principle of ball movement was being ignored.

The third way to beat the zone is with offensive rebounding. Last night, the Hoosiers managed to rebound 30.6 percent of their misses, which sounds decent until you realize their normal rate is 39 percent (eighth in the country) and Syracuse typically allows 34.1 percent (267th). The offensive rebound is one of the unavoidable weaknesses of the zone; when you’re not boxing out a specific man, there’s a tendency to be out of position. So it’s more than a little puzzling that a very good offensive rebounding team went up against a zone defense and somehow finished below its season average. Chalk it up to bad luck, maybe.

On offense, Carter-Williams and Triche exposed Indiana’s weak perimeter defense again, combining for 38 of Syracuse’s 61 points. Even using Oladipo to guard Carter-Williams didn’t work, and the Orange were able to slow the game down to a pace that fell below either team’s season average. But defense wasn’t the problem; 61 points would have been fine with Crean. Indiana’s noose was the zone.

So Syracuse moves on to face Marquette, a Big East team whose coach, Buzz Williams, knows all about the 2-3. Boeheim was probably hoping for another outsider, but now the Orange will have to make the Final Four the hard way. And Indiana, after surviving a scare against Temple, is gone for good. Crean’s Hoosiers were a mystery to the end; Big Ten champions, and often spectacular, but finally unable to overcome the same weaknesses we saw in November.

The Resuscitation of a Bracket

I’ve had a strange experience with my bracket this year. Usually my picks are either crap from the beginning or really good throughout, but this year I’ve been left for dead and undergone a Lazarus-like return. I took a lot of abuse early on for some unsightly picks in my bracket, but with Syracuse’s win last night, I’m suddenly looking “pretty good” with a chance at “really good.”

As you see, the South Region is an unmitigated disaster, and my big mistake was not recognizing the huge matchup problem Michigan posed for VCU. But everywhere else, I’m looking good to have a Final Four team, and if Louisville beats Syracuse in the final, I’ll win every pool I’m in. Even the mistakes, outside the South Region, are starting to look smart. I knew Gonzaga would lose in the West, but I thought it would be Kansas State, rather than Wichita State, which would make a surprise run to the Elite Eight. I had a feeling Miami would have a letdown against a slow, physical team in the East, but it turned out to be Marquette doing the damage instead of Butler.

Anyway, the point of me saying all this is that I expect personal apologies from everyone who mocked me.

Aaron Craft Is My Hero

My conversion is complete, and I want to proclaim it to the world. Picking Ohio State to reach the Final Four in my bracket has had the weird side effect of making me realize how much fun it is root for Aaron Craft, instead of hating him. I sort of understand what it must be like for an Ohio State fan now, and I like it. I suggest you try this with teams you hate (Duke, probably). Just create an artificial rooting interest, and suddenly you’ll find yourself in a totally different mindset. It’s quite a trip. My Craft-rage has totally vanished, and I’m a full convert. It feels great! If anybody’s interested in forming a Craft Cult of some sort, be in touch. I’ve been looking for something to do.

Some Quick Thoughts on Tonight’s Games

1. I keep trying to convince myself that Duke can somehow handle Michigan State’s interior bruisers – Adreian Payne, Derrick Nix – but it’s not working. Combined with the Spartans’ excellent perimeter defenders (plus the length of players like Branden Dawson and Payne, one of whom will guard Ryan Kelly), and Duke’s weak perimeter defense going against Keith Appling and Gary Harris, I’m only seeing disaster on the horizon. Maybe Seth Curry will have a miracle game, or maybe Izzo’s 1-6 lifetime record against Coach K means he’ll get scared and forfeit, but short of that, Duke fans should brace themselves for an ugly end.

2. I also keep trying to convince myself that Florida Gulf Coast, the best and most exciting story of this tournament, has reached the end of its Cinderella run. It only makes sense. Billy Donovan’s Gators should run them off the floor. That’s what happens to low seeds who make it this far, and FGCU is the lowest of the low — the only 15-seed to ever reach the Sweet 16. But the one thing giving me pause is that they’ve looked really, really good. It hasn’t seemed like a fluke at all, and based on the quality of play, I’m not even sure I can call the Georgetown and San Diego State games “upsets.” The Eagles just seemed better. I’ve got a strange feeling they’ll keep this one close, at least for a while, and Dunk City will live again.

3. Oregon is doomed. The Ducks are playing a team with a similar style — fast, great on defense — but better.

4. Michigan is doomed. Everyone on the planet has stars in their eyes for the Wolverines after impressive performances against South Dakota State and VCU, but those matchups were squarely in their favor. Now they finally face the kind of team that’s given them trouble all year — tenacious perimeter defense and a terrific shot blocker in Jeff Withey who can keep Mitch McGary and Jordan Morgan from scoring easy baskets — but nobody wants to admit that they’re in trouble. Are we so quick to forget this team has looked hapless on offense against bigger teams, and that they’re now facing the best field goal defense in the nation? If I see another article proclaiming the greatness of the Trey Burke–Tim Hardaway Jr. “guard duo” and predicting a national title, I might start just randomly screaming at neighbors and friends. Hardaway is a letdown waiting to happen, guys. Sure, he was great in the opening weekend, but with All-Big 12 defender Travis Releford likely guarding him, we can expect a quintessential dud. Unless Burke can find hero mode fast, this should be an easy win for the Jayhawks.