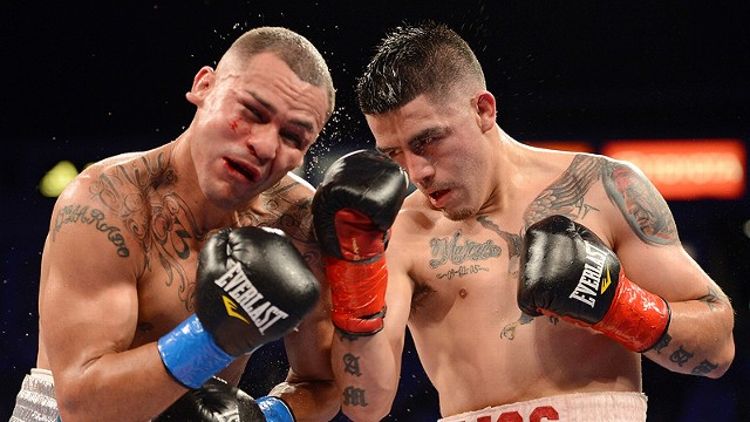 Let’s play the bonus round on Pyramid: “I’m in the best shape of my life” … “This has been the best training camp of my career” … “I’m not looking for a knockout, I’m just looking to win” … “He’s never fought anybody like me before” … “I have to fight three minutes of every round.”

And the category is, “Stock Answers Every Single Boxer Gives When You Interview Him During Training Camp.”

Perhaps the most annoying answer of all, however, is the one that comes when you dare ask whom the boxer wants to fight next if he wins this bout. Almost every fighter says the same thing: “I’m not looking past the opponent in front of me.” Then they make like well-trained Russian spies and refuse to name names.

But Brandon Rios is not like other fighters and he definitely wouldn’t last long as a spy. Rios has no filter. A couple weeks ago, as he was deep in the rhythms of camp for his March 30 rematch with Mike Alvarado, I asked Rios whom he wants to fight next if he beats Alvarado, fully expecting to come away with an unusable quote. Instead, I got this: “Honestly, hopefully, Golden Boy and Top Rank can end their feud so I can fight Danny Garcia and win his belt.”

Even after the fight, most boxers won’t call anyone out; they’ll instead say, “That’s up to my manager and my promoter — I’ll fight anyone they put in front of me.” But here was Rios, before a dangerous fight, committing the pugilistic public-relations crime of admitting he’d thought beyond the opponent in front of him. He wants Garcia, a fellow undefeated young American junior welterweight.

Problem is, Rios isn’t going to get him. It was a long shot two weeks ago, and since then it has crossed over to a virtual impossibility.

That Golden Boy Promotions–vs.–Top Rank feud that Rios mentioned? It’s been ratcheted up a notch. On March 18, parallel battle lines were drawn between boxing’s premium-cable giants, HBO and Showtime. Having seen pay-per-view king Floyd Mayweather take his business to the land of Homeland, HBO did what any respectable Iron Throne hopeful in Westeros would do and beheaded Golden Boy before Golden Boy could behead it. Mayweather represented the most hurtful blow in a migration of Golden Boy–affiliated talent from HBO to Showtime. HBO, instead of waiting for GBP’s last major holdovers, Adrien Broner and Bernard Hopkins, to leave, took the offensive and announced it would not televise any more Golden Boy fights.

This made official what had been gradually developing since former GBP attorney Stephen Espinoza took over Showtime’s boxing programming in fall 2011: Golden Boy is with Showtime, Bob Arum’s Top Rank is with HBO, and nobody’s allowed to cross the streams.

It’s just unfortunate that this ridiculously loaded weight range is essentially split in two, and the likes of Mayweather, Garcia, Broner, Robert Guerrero, Lucas Matthysse, Lamont Peterson, and Amir Khan are not available to Rios, Alvarado, Pacquiao, Marquez, or Bradley. Boxing has turned into pro wrestling in the 1980s and ’90s. The only way the cross-promotional dream fights will happen is if one of the fighters jumps to the other promoter and the other network.

Thankfully, the junior welter and welterweight divisions are so deep that this is more of a nagging annoyance than a crippling dilemma. Even though the sport is as fragmented as ever, quality fights are happening. Garcia faces Zab Judah on April 27. Mayweather takes on a presumably unarmed Guerrero a week later. Matthysse and Peterson meet two weeks after that in a potential classic. We just got Bradley-Provodnikov.

And tomorrow night we get Rios-Alvarado II.

Their first fight was savage poetry, a perfect confluence of limited technical skill and unlimited desire. It was exactly the fight that hardcore boxing fans tried to tell all their friends it would be. Alvarado used his superior fluidity and traditional technique to build a slight lead through five high-contact rounds, but Rios used blunt force to reverse the momentum and earn a stoppage in the seventh. It didn’t pack quite the dramatic highs that Marquez-Pacquiao IV or Bradley-Provodnikov did, but it offered greater consistency of action. Rios-Alvarado I didn’t contain a slow round, or even a slow moment.

A rematch wasn’t essential, since Rios left little doubt about who was the superior competitor over the course of rounds six and seven. Referee Pat Russell’s stoppage may have been a hair premature, but even Alvarado’s most ardent supporters know Russell didn’t affect the what, only the when. Pretty much everybody in boxing is picking Rios to repeat.

That’s why most of us hoped to see something other than an immediate rematch. My no. 1 fight in all of boxing was, and still is, Rios vs. Marquez, an endlessly fascinating, undoubtedly entertaining intergenerational matchup. And how fun would Alvarado vs. Provodnikov be, knowing what we now know about the Siberian sledgehammer?

But we’re getting Rios-Alvarado II, and there’s nothing at all wrong with that. If this were any other division in boxing, the rematch would be the only logical choice. It just so happens that this division is stacked with talent, and fans know there’s a limited window to prevent certain tantalizing matchups from becoming eternal what-if debates.

Unless someone leaves his promoter, though, the summer or fall boxing calendar will not include Rios vs. Matthysse, or Pacquiao vs. Guerrero, or Marquez vs. Broner, or Mayweather vs. Bradley, or Alvarado vs. Khan. And it won’t include the fight Rios says he wants most, against Garcia.

There are countless mouthwatering permutations out there. Some of them can happen. Some of them can’t. All we can ask of tomorrow’s blue-collar junior welterweight fight in the ring is that it be thrilling enough to temporarily distract us from the white-collar heavyweight fights going on behind the scenes.