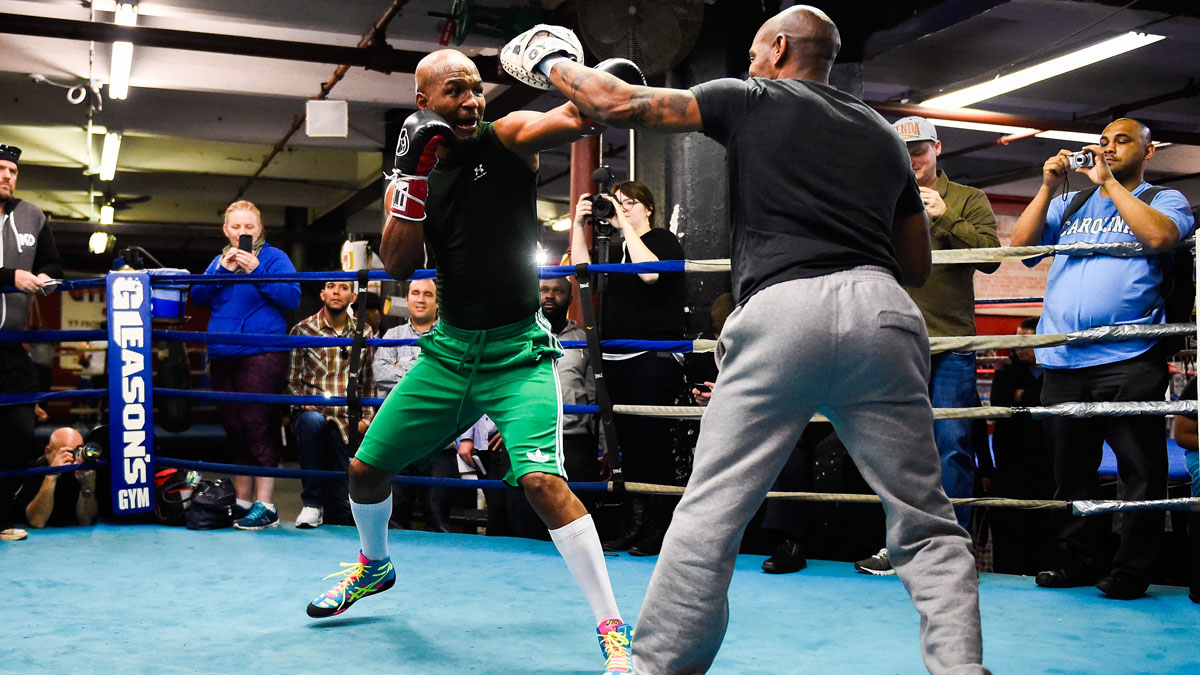 The mask has changed, but the man underneath it remains the same. Bernard Hopkins attempted a rebranding two fights ago, ending his two-decade run as “The Executioner” to become “The Alien.” His days of dressing like he’s fixing to stick up a Wawa or hang out in Zed’s basement are over, and somehow he’s traded in that look for something even more ridiculous. But a new nickname and get-up are not nearly enough to hide that this is the same old Bernard Hopkins.

And when you’re two months shy of your 50th birthday and daring to exchange punches with one of the best light heavyweights in the world, you want to stave off all the change you can.

Hopkins’s mind won’t slow down, his mouth won’t slow down,1 and if his body is slowing down, it’s doing so imperceptibly. And that’s why a 49-year-old man can emerge ever so slightly favored in a media poll as he prepares to take on an undefeated 31-year-old knockout artist.

Hopkins vs. Russia’s Sergey “The Krusher” Kovalev is a fascinating fight, one in which the two most likely circumstances are Hopkins proving far too sweetly scientific and outclassing Kovalev, or Kovalev steamrolling Hopkins the way that punchers in their prime are supposed to bludgeon dudes approaching AARP eligibility. Nobody knows which way it will turn out, but most observers expect one extreme or the other. It’s like previewing a football game and saying, “One of these teams is going to win by three touchdowns, but I don’t know which one it will be.”

Sometime around midnight in Atlantic City on Saturday, we’ll get our answer. Until then, here are the flip-floppy cases for both scenarios:

Hopkins will win because speed kills, and Kovalev doesn’t have it.

The two best wins of Hopkins’s 26-year, 65-fight career came against undefeated, relatively one-dimensional punchers with slower hands and feet than B-Hop: Felix Trinidad in 2001 and Kelly Pavlik in 2008. His most difficult fights came against Roy Jones in ’93, Jermain Taylor in ’05, Joe Calzaghe in ’08, and Chad Dawson in 2011, all of whom had Hopkins pipped in the speed department. Kovalev is a near-perfect fit for the Hopkins-friendly profile.

Even as the years tick by, Hopkins remains faster than most observers give him credit for. Against Oscar De La Hoya, a smaller man esteemed for his exceptional hand speed, Hopkins routinely got his shots off first. And even when he doesn’t have a pronounced speed advantage, Hopkins can dominate with his timing. Few in the sport set up the right hand as effectively as Hopkins does by freezing his opponents with a pawing jab. Needless to say, it’s in Kovalev’s best interest not to cover up and take his eyes off Hopkins, because the old man remains quick enough to make him pay.

Everyone’s natural instinct is to favor the younger, stronger fighter. But technique often matters more than youth, as the occasional bald guy with a beer gut and a half-zip pullover will remind us:

Kovalev will win because Hopkins was born before the Beatles discovered LSD.

The counter to labeling Kovalev as the next Hopkins victim in the Trinidad/Pavlik mold is to note that Hopkins was 36 and 43 when he fought those two. Yes, those are still advanced ages for a boxer, but they are … mathmathmath … less than 49. You can blow out only so many candles before somebody blows you out. Hopkins is more than a decade older than Peyton Manning, who is roundly hailed as a freakishly effective old athlete. There are retired ex-boxers with cartoon versions of themselves solving mysteries who are younger than Bernard Hopkins. You can never be fully confident picking fighters this old to win, despite the lessons imparted by bald guys with beer guts in half-zip pullovers.

Also, if the Kovalev fight reaches the seventh round, Hopkins will pass the 500-round mark for his pro career. All that mileage could work in the Krusher’s favor.

Hopkins will win because fights against him are where offenses go to die.

Hopkins doesn’t merely neutralize opponents. He neuters them (in a figurative sense, of course). His ability to smother shots, gauge distance, bend at just the right moment and angle, and always think a move ahead leaves his opponent shooting blanks. And once the frustration sets in, many fighters stop throwing altogether against Hopkins. Recall how utterly impotent Pavlik became as Hopkins clowned him. According to CompuBox statistics, over Hopkins’s last 13 fights, his opponents have thrown an average of 41 punches per round and landed 10. Those numbers are significantly lower than the light heavyweight division averages of 53 thrown and 17 landed. But the more telling comparison is to the same 13 opponents’ last four fights apiece before facing Hopkins, when they averaged 66 punches thrown per round and 20 landed. Across that sample size, Hopkins reduced output by 38 percent and connects by 50 percent.

There aren’t many boxers for whom you could compile a three-minute YouTube clip of them making opponents miss with left hooks. And that’s particularly relevant here because the hook just might be Kovalev’s best weapon (although the overhand right can get pretty nasty too).

“Ring generalship” is a term that gets thrown around a lot in boxing even though hardly anyone can explain what it means, but when you watch Hopkins fight, the explanation is right in front of you. It isn’t always pretty. Actually, the way that Hopkins practices it is almost never pretty. But you have to admire the genius at work. Hopkins is the conductor of a dissonant symphony, with all the seemingly wrong notes put there by design.

Kovalev will win because he needs to land only once.

We’ve hyperlinked quite a bit to what Bernard Hopkins can do in the ring. Here’s what Sergey Kovalev can do. If you have six minutes, watch the entire “greatest hits” video and you’ll see two of the heaviest hands in boxing whack one overmatched opponent after another across the ring. With 23 knockouts among his 25 wins, and with his fights lasting an average of just 2.77 rounds apiece, there’s no questioning Kovalev’s power. Even if he ends up throwing only 40 punches per round and landing 10, that could be enough to get the job done.

No, none of Kovalev’s opponents to date compare with Hopkins. But recent Hopkins opponent Karo Murat doesn’t remotely compare with Kovalev, and Murat managed to give B-Hop a few scary moments. If Kovalev probes the Alien in that way, we might learn that Hopkins is, in fact, human.

Hopkins will win because he’s been in Kovalev’s head from the moment the fight was signed.

We know that Hopkins can get all sorts of mind games cooking after the bell rings (again, see the Pavlik humiliation), but against Kovalev, the old yapper launched his mental attack three months ago. He declared himself victorious over Max Kellerman in the three-way interview that followed Kovalev’s win over Blake Caparello, and while that triumph held little import, Kovalev looked uncomfortable in close proximity to a ranting B-Hop. Some of the things that Kovalev has said in the run-up to the Hopkins bout are concerning. The Russian has claimed he doesn’t have a strategy for fighting Hopkins; perhaps that can be dismissed as misdirection from a boxer who doesn’t want to reveal his strategy. However, this quote is harder to dismiss: “I want to get some lesson from the professor of boxing. He is old-school boxer. I want to get some experience from this fight that can make me better for another fight.” Chalk some of the implications there up to Kovalev’s imperfect English if you like, but the goal in a fight this big should be to win, not to learn. How confident can Kovalev be if he’s already searching for silver linings?

Kovalev will win because you can get in his head all you want; he’s still going to get to your body.

Kovalev is a devastating body puncher, even when he isn’t loading up on the body shot. Hopkins is a master at ducking the left hook, but there’s no ducking a punch to the rib cage. It’s the highest-percentage shot in boxing.

It’s also the most easily countered punch in boxing, so the key for Kovalev is not to think too much about consequences. Fortunately, it doesn’t seem like Kovalev spends much time thinking about the consequences of anything. If he did, he probably wouldn’t do this in public with cameras rolling:

Perhaps Hopkins will give Kovalev the “lesson” he so desires. Perhaps Kovalev will hit Hopkins with a punch that lands him facedown at the intersection of knuckle push-ups, the worm, and simulated sex. The guess here, with very little conviction, is that it will be the former, and that Hopkins will remain an alien for just a little while longer.

NBA After Dark Podcast: Celebrating Boogie and the Kings, Worrying About the Cavs