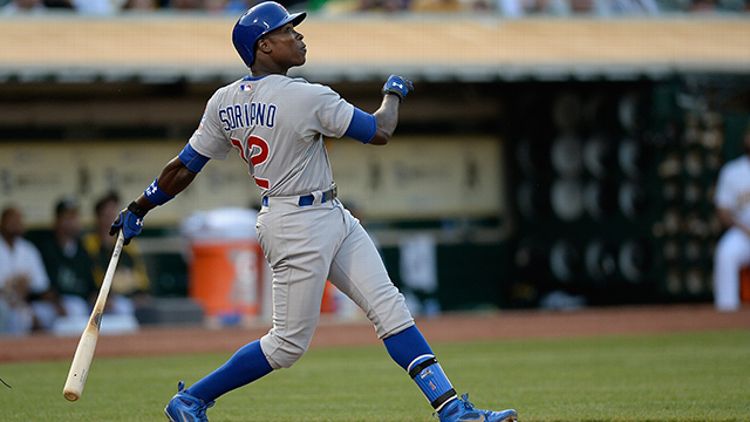 Desperate for any hitter with a pulse, the Yankees acquired Alfonso Soriano from the Cubs, landing a 37-year-old left fielder with a .287 on-base percentage who still qualifies as a major upgrade over what they have.

Crushed by injuries to Curtis Granderson, Derek Jeter, Mark Teixeira, Alex Rodriguez, and others this year, the Yankees have been fielding a lineup stuffed with stiffs. They’ve wasted 132 plate appearances on David Adams (.192/.260/.275), 154 on Eduardo Nunez (.235/.289/.316), 289 on Travis Hafner (.209/.304/.390), and a staggering 351 on Vernon Wells (.240/.288/.366). That’s 926 plate appearances pissed away on players who’ve contributed replacement-level performance or worse. And that doesn’t include smaller-sample bouts of terrible from washed-up veterans like Kevin Youkilis and scrubs like Ben Francisco, Reid Brignac, and Alberto Gonzalez.

As a team, the Yankees are hitting just .243/.306/.372 this year; only the lowly White Sox, Astros and Marlins have fared worse on a park-adjusted basis.

That’s how you get a team willing to acquire a player hitting .254/.287/.467 and thrust him into the middle of the lineup. The Yankees are surely hoping for something closer to the version of Soriano we’ve seen in the past month, in which he’s hit .280/.320/.699, with 10 of his 17 homers for the season, though they’d likely settle for anything in between, given the way their offense has been going. Soriano has hit eight home runs in July. The entire Yankees team has hit seven. Right-handed Yankees hitters have hit just three homers in the past two months.

The deal isn’t expected to be finalized until later today, or possibly later this weekend. But ESPN’s Buster Olney and others report that the Cubs are expected to pick up most of the $25 million owed to Soriano between now and his contract’s expiration at the end of next season. The Yankees are reportedly expected to give up a relatively minor prospect for Soriano’s services, too. Assuming those rumors hold, it would signal a lack of buyers for Soriano — understandable if you look at his season-long numbers rather than the past month, and consider that Soriano wielded a no-trade clause and needed to approve the Yankees as a buyer — and a desire by the Cubs to start playing kids they hope will be part of the next winning Cubs team. Junior Lake is doing his best Yasiel Puig impression, hitting .484/.500/.774 in his first seven major league games. Might as well see where he goes from here.

So what could the trade mean for the Yankees? For starters, they’re not blocking any good prospects who could do the job instead (they would likely be up already). Given how awful the alternatives have been, Soriano could conceivably add one win or maybe a shade more, even with just 60 games left to play this season. There wouldn’t seem to be any major downside here.

But the bigger issue is that the Yankees will likely need to do a lot more to hoist themselves back into the race. They trail the division-leading Red Sox by 6.5 games and would need to climb over two teams just to snag the second wild-card spot. Even with Soriano’s arrival, they still would be starting five or six below-average to awful hitters on any given day. Given that Granderson and Jeter have already been out much longer than expected, not to mention all the insanity swirling around A-Rod, reinforcements might not be coming all that soon. Soriano makes for an easy upgrade at a reasonable price. There just might not be many — or any — other Soriano-like deals out there.