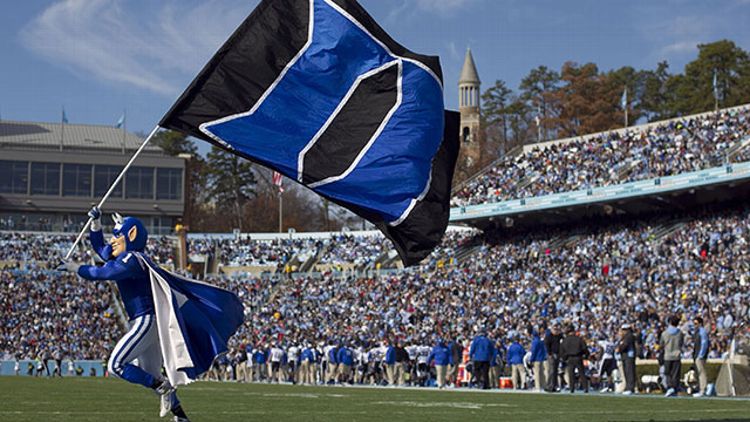 I watched the Duke-UNC game at Kenan Stadium in Chapel Hill with two friends, one of whom was French and still a little rusty on the rules of football. It took a while, for instance, to explain why a team would ever choose to decline a penalty. That established, I turned to the cultural side, and told her that Duke-Carolina was the politest rivalry in the country. I attributed that to either extreme proximity or regional decorum or the fact that the chief sport of contention was basketball, a kinder, more philosophical game. But she had been at UNC long enough to disagree; “everyone here hates Duke.”

On my side were the two girls in the row below us, maybe 7 years old, wearing winter hats with Rameses the Ram poking out from the top, who turned around and taunted me anytime Carolina did something right. I’d cross my eyes at them, they’d shake their pom-poms back, their parents smiled. On her side was the angry Carolina fan who threatened to punch my other friend in the face after the game, which Duke won 27-25 to move to 10-2 on the season and win the ACC Coastal Division. Oh, except he didn’t say punch; he said he’d “put him to sleep.” (See? Even the threats of violence are couched in the language of loving acts.) My friend had committed the crime of standing on the concrete steps in the raging fellow’s path. He wanted to charge out of the stadium, and his face was red from anger and maybe booze. He didn’t like to be impeded. We laughed at him, and then he threatened to put me to sleep, too, and then he went home to punch holes in his walls.

I still say we’re polite. Nobody has killed any trees. We mostly just revel in our stereotypes.

We were just across the stairway from the small Duke section, which was full and passionate. But let’s qualify “passionate,” because you can’t just flip a switch and manufacture real football passion. It has to be built up over years, and we don’t have the history. It was a mellow kind of buzz that peaked here and there into near-frenzy. Some people even stood up.

“Any Arizona fans over there?” a UNC fan shouted. The night before, Arizona had beat Duke. In basketball.

Now that I think of it, my friend had been sniping all day. Just a constant stream of mild invective. He called every penalty an “infraction,” a shot at UNC’s recent NCAA violations. He yelled at the referees after obvious calls. He talked about how he was going to go on the field and ring the Victory Bell (that’s our odd rivalry trophy) when the game was over. It was relentless, masterful trolling. It made sense that somebody wanted to put him to sleep.

Here’s what happened: James Naismith invented basketball in Springfield. Six years later, he went to Kansas and started its team. Phog Allen lettered during those years, and later he coached Adolph Rupp, who brought big-time basketball to Kentucky. The Rev. Nicholas McKay was another Springfield protégé, and he brought basketball to Indiana through the YMCA; by 1911, the state already had its famous high school tournament. Everett Case was an Indiana boy growing up in the heart of Hoosier Hysteria. He won four state championships coaching Frankfort High School before he took the job at NC State in 1946. There, he conceptualized the ACC tournament, and his teams were so good that the other schools called them the “red menace” and were obliged to upgrade their own facilities and teams to compete. Here, too, the sport beat football and became a lasting craze.

Broadly speaking, that’s why Kansas, Indiana, Kentucky, and North Carolina are oases in regions of the country that are otherwise dominated by football. Visionary leaders, good timing, and an unpredictable spark. It’s why we have “basketball states” outside of the Northeast. It’s why Duke just won the ACC Coastal Division football title, but the average Duke fan cares more about the Arizona basketball loss. It’s why students have to live inside a miserable tent for two weeks during the coldest time of year to watch a home game in Cameron Indoor Stadium, but you can scalp a $5 ticket to any football game if you show up a few minutes before kickoff.

I won’t pretend I’m the biggest Duke football fan. The team won eight games when I was in school, and that was over four years. The whole thing was good for a laugh, and that’s about it. Our main tradition was rattling car keys during kickoffs. When the team broke a 23-game losing streak against East Carolina in 2002, we carried the goalposts to the chapel. I’m not even sure why I was at that game, but I didn’t go to many more. Why would I?

In truth, there were advantages to having a lousy team. If you go to Duke, everyone assumes you’re an asshole, and basketball is too important to spend time proving them wrong. But football gave you a chance to prove you were able to be self-deprecating, a vaguely human trait. It didn’t matter, so you could afford to take a hit.

After the game, I found out my French friend has visited 30 American states, which made me feel like a lousy native. But she didn’t know that Duke’s nickname, the Blue Devils, came from the Chasseurs Alpins, a French infantry unit nicknamed les Diables Bleu who toured America during World War I to raise money. When Duke needed a nickname in the early ’20s, the campus was full of veterans, so Blue Devils worked.

I’m glad outsiders are generally unaware that our nickname comes from the French army, because we’re already hated enough.

And all this team can do is win. It’s wonderful, and it’s confusing. There are two quarterbacks, one of whom, Brandon Connette, is supposed to be the runner, and one of whom, Anthony Boone, is nominally the passer. But Boone is also a good runner, and Connette sometimes throws better than Boone. The defense looks completely incompetent for long stretches, and yet has given up just 37 points in the fourth quarter all season. (Coming into the Carolina game, Duke had the best fourth-quarter scoring margin in the FBS.)

It often appears that Duke has nobody who can throw an accurate pass, and yet opponents flood the box and still can’t stop the run. Inside the 10-yard line, we revert to the same play over and over — fake handoff, QB run. Everyone knows it’s coming, and it rarely fails. The last five wins have all been extremely dicey, and when you look back, all are mysterious. How did this defense hold Virginia Tech to 10 points on the road? How did they beat NC State by 18 points despite trailing 24-20 with 3:31 remaining? How did they come back against Wake and Carolina when the defense was being trampled in front of hostile crowds? What’s happening here?

It has a bright glow of unreality, and that’s why it’s been so enjoyable. Our coach is warm and funny, our players haven’t been caught doing anything obscene or disgraceful, and luck is finally on our side. No Clemson on the schedule? No FSU? Perfect. This is the year the universe rolled out the red carpet, and game after game, Duke fans leave the stadium in a state of pleasant shock. We shake our heads and smile, like we just won 100 bucks on a Christmas scratch-off.

The Miami win was when the success started to resonate. Before that, it felt like being caught up in a twister and dumped down on a particular side of a fence called “win.” All the ominous signs of cosmic comeuppance were present, and we won anyway. After Miami, Duke fans felt OK allowing themselves a measure of belief. Something legitimate was happening, and we could let down our guard. It was OK to think these were good times, and that they would roll on.

So while the Carolina game was tense throughout, everyone in Duke’s corner felt so good. Sometimes you don’t know you’re in the midst of a dream year until it’s over, but sometimes you do, and we knew. After Carolina took a 25-24 lead with seven minutes left, we knew Boone would drive us down, and we knew we’d score. After that, with Carolina marching, we knew the defense would pick this moment to surprise everyone again. We knew something like DeVon Edwards’s interception would happen. This wasn’t the game when the balloon would pop. This wasn’t where the joy ride would end. It was a lasting buzz.

When it became clear that Duke would beat Miami three weeks ago, I tried to start a “We want the Noles!” chant. It wasn’t meant to be serious, and nobody took it that way. But it was already becoming clear that the Tallahassee juggernaut waited at the end of the road. That’s where we were headed: to Charlotte, to the ACC championship, to Jameis Winston and Florida State, to a game that opened with Duke as 27.5-point underdogs (the line has since moved to 30).

They’re all out there for the taking. I hear you laughing, but we’re laughing too. There’s a happy ending out there somewhere.