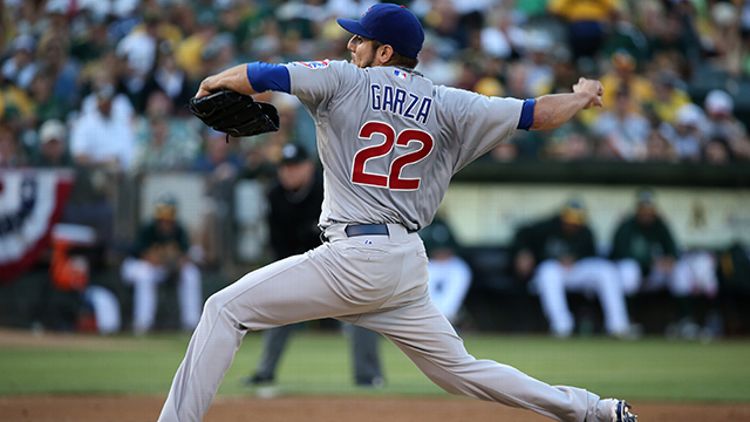 In Garza, the Rangers acquired what might turn out to be the best pitcher on the market, maybe even the best player, period. From 2008 through 2011, he was on average slightly better than a three-win pitcher, averaging just slightly fewer than 200 innings a season. Injuries have sidetracked him since and the Cubs seemed likely to trade him last summer, but a stress fracture in his right elbow kiboshed those plans. He made it back from that injury in the spring, but then suffered a lat strain that knocked him out for seven weeks. He has pitched well since, posting a strikeout-to-walk rate of better than 3-to-1, a 3.17 ERA, and a 3.78 FIP. Narrow it down to his past six starts and you get much better results still: 43⅔ innings, 38 strikeouts, 10 walks, three homers, 1.24 ERA, opponents’ line of .210/.264/.302.

Those numbers do come with a caveat, as I wrote last week:

Finally, those getting excited over Garza’s recent post-DL hot streak need to keep in mind the context behind that streak. In his big five-start streak (prior to yielding 12 baserunners in 6⅔ innings to St. Louis right before the break), Garza went 4-0 with a 0.97 ERA, striking out 34 batters and walking just eight in 37 innings. But those starts came against the Mets (21st in park-adjusted offense), the Astros (28th), the Brewers (15th, but they were missing star slugger Ryan Braun at the time), the A’s (10th, fine), and the White Sox (29th). Leaving aside the inherent dangers of relying on too-small sample sizes when evaluating players, in this case you’re talking about a solid but unspectacular starting pitcher, fresh off an injury, beating up on what was mostly a group of cupcakes.

Still, at a certain point we’re picking nits. The best pitchers who’ve changed hands thus far are Scott Feldman and Ricky Nolasco, two perfectly competent starters who are upgrades over the stiffs they bumped out of their respective new rotations, but still a cut below the league’s elite. Garza isn’t what you’d call an ace either, but he’s been consistently successful when healthy, he’s still just 29, and teams do value the success he had in the playoffs, notably in 2008. The Rangers do harbor some concern over Garza’s elbow. But their own rotation has been ravaged by injuries this year: They just got Yu Darvish back from the DL on Monday, Alexi Ogando is set to return tonight, and Colby Lewis, Matt Harrison, Nick Tepesch, and Neftali Feliz remain sidelined. An eventual rotation of Darvish, Derek Holland, Garza, Ogando, and either Lewis or Martin Perez could rank among the game’s best.

Thing is, the Rangers might need to do more if they hope to knock off the A’s in the AL West, or even snag one of the two wild-card spots. The AL East threesome of Boston, Tampa Bay, and Baltimore present formidable competition, wherever those teams finish in their own division. Moreover, the Rangers’ offense has been decidedly mediocre on a park-adjusted basis. That offense could get substantially weaker soon, too. Nelson Cruz has been the team’s second-best hitter among the team’s regulars. He’s also been rumored to be part of the ongoing Biogenesis investigation. Given that Ryan Braun just got suspended for the rest of this season, the Rangers have reason to worry their own slugging outfielder could soon meet a similar fate. Meanwhile there’s an open question as to whether Texas would dig deeper into its farm system to land a bat, and if there’s even a truly impactful position player out there; Alex Rios has been the biggest name mentioned, and he’s hitting a modest .277/.331/.441 (albeit with plus defense and baserunning, making him a solidly above-average player). Even with Garza, the Rangers should still be considered an underdog until further notice.

They gave up a lot to advance to this still tenuous position, too. In exchange for slightly more than two months of Garza, Texas relinquished one of the biggest prospect hauls of any deadline deal in years. Thanks to a recent rule change, the Rangers can’t get a compensation pick if Garza signs with another team at year’s end either, now that they’ve acquired him in a deadline deal.

For the Cubs, the prize of the trade is C.J. Edwards. The lanky, 21-year-old right-hander wouldn’t seem to have the pedigree to be a linchpin in a big trade, having been drafted by Texas in the 48th round two years ago. But scouts are bullish on his stuff, and the numbers have been huge in his first go-round in the Sally League: 122 strikeouts against 34 walks in 93⅓ innings. Justin Grimm has picked up some of the Rangers’ injury slack this year, manning the fifth slot in the rotation. The 24-year-old righty has struggled in that role, posting a 6.37 ERA — albeit with a 4.79 FIP that’s poor but not quite as ugly. Keith Law wrote about all the prospects involved in the deal and pegged Grimm as more of a future swingman or bullpen piece, given he throws only two pitches with any kind of effectiveness.

The wild card in the deal (other than the player to be named later, that is) is Mike Olt. Considered a top prospect as recently as last winter (Baseball America ranked him no. 22 overall this year, after a no. 43 ranking last year), Olt’s production has slipped in 2013. The 24-year-old corner infielder has hit just .213/.317/.422 in the hitter-friendly Pacific Coast League. Olt has dealt with vision problems this year, with some concerns that he might be suffering from lingering post-concussion symptoms. On one hand that mitigates his poor numbers; on the other, we’re still very much in the dark on the effects of concussions and how they can affect athlete performance over time, let alone how they can impact overall health. Still, we’re talking about a hitter who swatted 28 homers and hit .288/.398/.579 just a year ago. Even in the offense-conducive Texas League, those are gaudy numbers, and it’s tough to ignore the high opinion that Baseball America and other prospect hounds held of Olt just a few months ago.

Look for the Cubs to continue cashing in veterans for prospects: The rumor late Monday night had them close to shipping Alfonso Soriano to the desperate-for-bats Yankees. They’ve already built one of the most promising collections of young position players in baseball, between major leaguers Anthony Rizzo and Starlin Castro, as well as prospects Olt, Albert Almora, Kris Bryant, Jorge Soler, Javier Baez, and Dan Vogelbach. Cashing in more chips only makes the future more intriguing.

They might be lousy again this season. But the way they’re stockpiling talent — in the draft, on the international market, and via trades — you can close your eyes and start to imagine a contending Cubs teams in the not-too-distant future … even if they’re not quite ready to fulfill Eddie’s prophecy.

If You Build a Stoop, They Will Come: Wisconsin's Stoopball League of America