If You Build a Stoop, They Will Come: Wisconsin’s Stoopball League of America 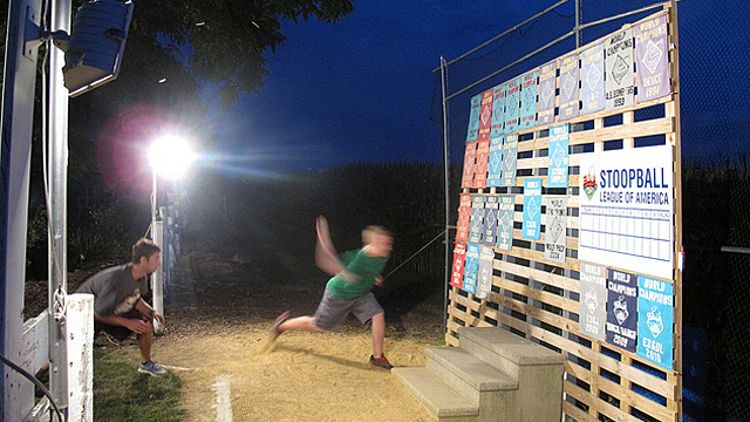 Along County Road X, just outside the farming village of Clinton, Wisconsin, stands a large white house with a wraparound porch that, for one day each year, is also a home run fence. Two of its pillars are foul poles, shaded yellow; chalk marks on the yard designate foul lines and lead to a miniature dirt infield, where a three-step concrete staircase rests in front of a backstop. Displayed on the backstop is an old-fashioned scoreboard titled “Stoopball League of America.”

Ordinarily, most of the noise around here comes from cars whooshing along the highway, but on this particular day, the traffic is drowned out by cheering fans and the nonstop sound of rubber balls smacking against concrete at point-blank range.

“[At first] they kind of don’t believe that it’s fun to go to Wisconsin and throw a ball against a stoop,” Craig Ruston, the league’s commissioner said. “But it’s grown every year, so people tell the tales, and people follow.”

On Saturday, about 300 people from all over the country descended on this southern Wisconsin residence for the 29th annual Stoopball League of America world championship, a tournament dedicated to the largely extinct form of street baseball that was popular in major cities after World War II. The league’s founder and the home’s owner, Tom Katroscik, a 67-year-old chef and former singer, has spent tens of thousands of dollars over two decades transforming his near-acre-sized property into the first world-class stoopball park.

But Katroscik’s obsession — each Thanksgiving he hosts winter meetings, and for years he published a regular offseason newsletter — is not about stoopball, friends and family members say. It’s about what Katroscik sees as the perfect vehicle to promote a community where people are kind, competition is spirited but fair, and lifelong connections are made.

Stoopball originated in dense urban areas like New York, where children often lacked the space to play baseball. Rules varied based on the neighborhood, block, or building, but the idea was always the same: A “batter” would fire a ball (in New York, the kids used pink balls they called “Spaldeens”) against the steps of an apartment building, with the number of bases contingent on distance the ricochet traveled.

The SLA’s inspiration occurred during a barbecue in Michigan about three decades ago, when Katroscik — who grew up playing stoopball in Detroit — heard a friend’s daughter say that she was bored. Katroscik suggested stoopball and headed over to a nearby stoop to demonstrate. Soon Katroscik was playing with his own friends in the backyard of his home in Detroit, and a tradition began. (Katroscik named the venue Chance Field “after a dog that died out there,” Ed Holahan, an original player, said.) On the rear brick wall, Katroscik planted ivy to replicate the outfield fence at Wrigley Field. Holahan — who grew up in Queens, where stoopball was “natural, like air” — said he was in heaven.

When Katroscik’s wife, Carol, accepted a job in Beloit, Wisconsin, Katroscik was hesitant to move, but “as soon as I saw [the new house] I was like, wow, we’re gonna be able to put on a show here,” he said.

According to Carol, “the first thing he did was get a stoop and put it in the backyard.” (This baffled neighbors, not to mention the man who delivered the stoop from a lumberyard in town.)

That year, 1989, Katroscik and Carol went to see Field of Dreams. “We were kind of laughing, going, ‘That’s just like what we do,’ you know?” Katroscik recalled.

About 50 people, mostly friends from Michigan, traveled to Wisconsin for the first tournament. But that number would swell as families grew and word spread. Katroscik built two additional fields whose home run walls were up against the cornfields. He installed bleachers and decorated the white picket fence surrounding his property with colorful advertising signs — some of local businesses, others of fake companies, but each funded by Katroscik — to give the appearance of a minor league ballpark.

He transformed a chicken coop into a spectators’ dining area, and stored memorabilia, like encased championship stoopballs, in a clubhouse. An official SLA logo — depicting a ball rocketing off a stoop — was printed on clothing, banners, and coffee mugs.

Katroscik said he spends approximately $8,000 each year in preparation for stoopball week. To offset at least a fraction of Katroscik’s costs, each team pays an entrance fee of $35, and Katroscik sells tokens for hot dogs and other ballpark-type foods.

On Saturday, about 75 cars were parked in a field across the road from Katroscik’s house. Tents were scattered about the front lawn, and people greeted one another by saying “Merry Stoopball!” Kids roamed the grounds as if they’d been unleashed in an amusement park.

There were two tournaments, a competitive league and a family league. In the competitive division, where top teams were stacked with athletic twentysomething men, each squad played four round-robin games followed by a single-elimination playoff. Games went seven innings, although the official rulebook states, “Any game must complete five innings to be official. This includes games ended by darkness, rain, or an act of God (such as Mom or Dad saying it’s time to come in), etc.”

Teams included the Holy Stoopballs, composed of a local pastor, two church employees, and the pastor’s husband; the Alaska Hounds, made up of a family from Anchorage; and E3, a local team and five-time champion. E3 player John Henry Erickson, 25, who patrolled the outfield with ease and made multiple diving catches on Saturday, played alongside his father and brother; a common family saying is that they’d be happier with “two Stoopballs and no Christmases.”

A large championship trophy, which hangs in the Katrosciks’ kitchen, honors each winning team since 1985 with a plaque, and includes an artistic representation of the inaugural stoopball contest at Chance Field in Detroit. Also displayed nearby is a letter from basketball announcer Marv Albert thanking Katroscik for mailing him a stoopball cap, and a hospital discharge slip from the day in 2008 when Katroscik had a severe heart attack and suffered “Sudden Cardiac Death.” After being dead for more than 10 minutes, witnesses said, he was miraculously resuscitated by local fire chief John Rindfleisch and EMT Brad Farrell. The following summer Rindfleisch and Farrell formed a stoopball team, and were honored by throwing out the ceremonial first pitch. They received an emotional ovation and were showered with Life Savers candy. The pair has fielded a team called the Life Savers each year since.

The title game on Saturday began after sunset. Spectators crammed onto the porch and bleachers, and spread out across picnic blankets. The cornfields, such a dominant part of the sightline in daytime, were dark, and the championship field glowed under bright lights. The game, pitting E3 against Chuck and Duck, was an unexpected pitchers’ duel. With the score tied at 1 in the bottom of the seventh, a Chuck and Duck batter smoked a drive that sailed barely over a leaping Erickson’s outstretched hand, landing on the porch for a walk-off homer. The place erupted. Erickson embraced and congratulated the winning players. “It’s still stoopball,” he said afterward, “so it’s the best day of the year.”

Louie Lazar (@louielazar) is a journalist living in New York. His work has appeared in the New York Times and Tablet Magazine.