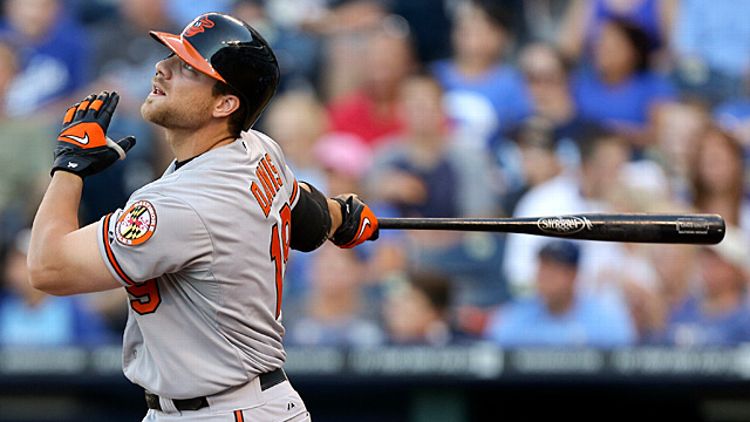 At any moment, Major League Baseball features a few star first basemen who are just big, through and through. Big shoulders, big arms, big down to the trunk and butt and legs. Not necessarily fat guys like Mo Vaughn and Prince Fielder, or even muscle-bound freaks like Mark McGwire, but guys who are big because it’s impossible for them to be otherwise. They’ve been around forever, from Roger Connor to Jimmie Foxx to Ted Kluszewski to Frank Thomas to Ryan Howard, and now to Chris Davis.

Chris Davis is big. He has big arms, big legs, and a big head. He takes big swings and chews what appears to be a preposterously large wad of tobacco. The Longview native is, in all respects, bigger than any Texas of the mind.

And then you get to his offensive output. Davis leads the American league with 37 home runs in 412 plate appearances in 99 games. That’s one home run every 11.1 times to the plate, with an average of 4.16 plate appearances per game. Holding those rates constant (a big assumption, but this is for fun, not for science) and assuming he plays in each of the Orioles’ 62 remaining games (ditto), that puts him on pace for about 23.2 more home runs for the rest of the season.

Unfortunately, that’s got to get rounded down to 23, even though bashing home runs and breaking records is more fun than being scientifically rigorous. That gives Davis exactly 60 home runs on the year, 13 short of the all-time single-season record.

To surpass Barry Bonds’s 73, again, holding him to 4.16 plate appearances a game, he’d need to homer about once every seven plate appearances, which nobody in major league history has ever come close to doing over a full season. So it’s not, like, completely impossible that Davis overtakes Bonds, but it’s close.

Davis is under the belief, as he said over the All-Star break, that Roger Maris’s 61 home runs is actually the record. Let’s leave aside that the single-season home run record is a matter of historical fact and not open to interpretation based on one’s opinion of Barry Bonds, because 61 is still the single-season American League record. Can Davis break that mark? He’d need 25 home runs in 62 games. Again, that’s a lot, but breaking that would take a home run every 10.32 plate appearances, which is not too far off what he’s doing now.

To break the Orioles’ single-season home run record (50, set by Brady Anderson in 1996), Davis needs 14 more home runs, or one every 18.4 plate appearances. That’s still a big ask, by historical standards, but even if Davis cools off some, the team record ought to be in the bag.

In summary, Davis, barring injury or a prolonged slump, looks like he’ll break the team record and at least give the American League record a scare, even if the all-time single-season record appears to be out of reach.

But let’s put this season in context, because we’re living in a world where home runs (and runs in general) are harder to come by. Here’s a table, courtesy of Baseball-Reference, that shows league-average rates of runs and home runs per game for 2013 along with three other famous seasons: 2001, when Bonds hit 73 homers; 1998, when Mark McGwire hit 70; and 1961, when Maris hit his 61 home runs. The short version is that teams score about half a run less per game today than they did a decade ago, and a third of a run less than they did in 1961.

Home runs per plate appearance tracks slightly differently. Davis is hitting a home run about 3.45 times as often as his contemporaries, but it’s still not as big a difference as any of the other record-breaking home run seasons.

If you wanted, you (meaning someone with a little more mathematical wherewithal than I have) could add in park effects. McGwire played in a pretty much symmetrical ballpark, while Bonds and Maris played in stadia that massively advantaged left-handed power hitters (though AT&T Park is pretty much Death Valley for hitters who, unlike Bonds, can’t put a ball in the drink whenever they damn well feel like it). Davis plays in Oriole Park at Camden Yards, which is also shorter to right field than it is to left, and plays as a better home run park in general than the league average.

Even looking at home runs on a per–plate appearance basis, Davis still lags slightly behind the most famous home run–hitting seasons — he’s got a legitimate shot at Maris, though the all-time record is almost certainly out of reach. But to even come close to these legendary seasons, as Davis has, is pretty incredible. And the numbers he’s putting up? They’re big.

If You Build a Stoop, They Will Come: Wisconsin's Stoopball League of America