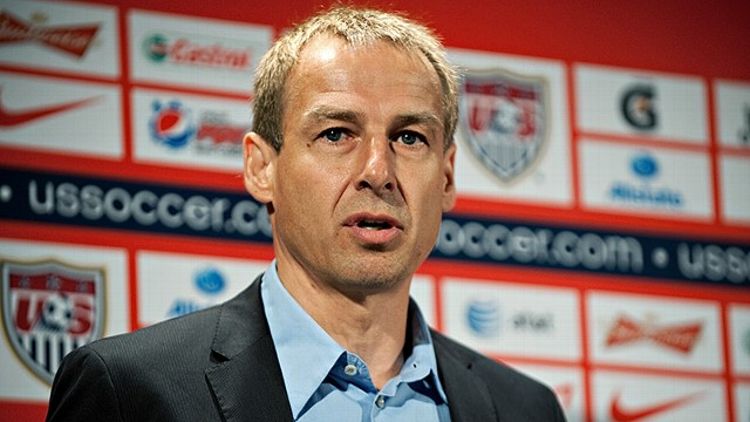 Jurgen Klinsmann drew criticism for using 26 different starting lineups in his first 26 matches as head coach of the United States men’s national team. But let’s talk about more important matters, namely that he sported just as many outfits while smiling and scowling on the sideline. Whereas his predecessor Bob Bradley favored casual tracksuits or sweats, Klinsmann possesses some sartorial imagination, showing a bit of the flair and creativity that allowed him to score 47 goals for the German side between 1987 and 1998.

His wardrobe decisions are tracked and chronicled by fans, and there’s even an infrequently updated blog dedicated to his choices. Klinsmann’s wardrobe choices inspired us to track down a few of our favorite fashion folks, give them some pictures of Klinsmann, and let them loose. Welcome to the first — and, let’s be honest here, hopefully last — edition of Jurgen Wore It Best. (If you’re so inspired, many of the items are for sale in the U.S. Soccer shop. Synergy!)

Friedlander: This look is the quintessential “Good Guy Tryin’ to Be Fashion-Forward.” I’m pretty sure Rag & Bone invented it, but unfortunately, guys like this dude have taken it out of context. It’s kind of like a mullet. If you only see part of him (waist up), he’s in a boring father-at-his-son’s–bar mitzvah suit. Scroll down and you see some snazzy leather kicks — just professional enough for a grown man to get away with wearing them at a press conference.

Herbst: A suit and sneakers? It has certainly been done enough on the red carpet and in the pages of GQ, but a soccer coach makes it look more authentic than, say … Nick Cannon.

Hooper: I like this look. A blazer and oxford is always a good look. Couple that with sneakers and you have a look you can get away with just about anywhere.

Murphy: Thumbs up! Love the look of pairing something dressier with something more casual like his hip sneakers.

Rigg: I dig it. The pale blue button-down holds the ensemble together: dark blazer and pants, traditional belt buckle. Those parts let you know this is a guy who just signed a multimillion-dollar contract. The open top button (no tie) and sneakers let you know he brings some outside-the-box thinking, set the tone for his hire. Also, are those shoes brown? I kind of want a pair.

Friedlander: The dressed-up T-shirt is one of the best advances in men’s fashion since denim. Before Kanye was rocking his APC tees, wearing a simple white Hanes may have been seen as unacceptable. But add those three little buttons and you can call it a henley. His decision to throw khaki in the mix definitely preps it up a bit.

Herbst: Love it! Every man should grab a slim-fit henley for summer — the comfort of a T-shirt but a tad more polished. He looks great. This is a good “cool dad on the weekend” outfit — not showing off, not falling behind.

Hooper: I’m a fan of patterned pocket tees. And this one goes a step further by adding a couple buttons, thus making it a henley. I believe they did this for their centennial campaign, and it does have a vintage feel about it. Casual but with just a little attitude. Maybe like Jurgen himself? This isn’t jeans and sneakers, but it’s pretty close. This is like Southern California rolled up in an outfit. Laid-back and all kinds of chill. But the pants and shirt fit well, so it doesn’t come across sloppy.

Murphy: I love the pop of patriotism on his pocket. This outfit is young and fresh. A+

Rigg: Big fan of the henley over here. It’s relaxed and comfortable like a T-shirt but gives you somewhere to clip your headphones. I’ve got a couple in my wardrobe. Two keys to this outfit: (1) The khakis are dressy enough to fit with a suit, so they snazz up the shoes/shirt, and (2) the pocket. That’s the only indication that this is U.S. Soccer gear. How many times do you rummage through shirt racks and find something you like, only to see that the front is just an advertisement? Even if you’re not a fan of the U.S. national team (or the United States, for that matter), you can still pull on this shirt guilt-free.

Friedlander: Tight pants are hot when you’re in a poorly lit nightclub in the East Village. They’re a bit questionable on a field … unless you’re one of the athletes. With that said, it’s nice to see that he’s dressing appropriately for the event.

Herbst: I assume that’s all USA team gear, so I get why he’s wearing it. All the contrasting blocks of color on his shirt read a bit random to me, but maybe it’s the angle.

Hooper: Jurgen looks like he could still play, and he shows it by going slim-fit on his training gear. He may have an all-slim-fit-all-the-time philosophy when it comes to dressing. And I’m not mad at that. I feel like this look is a reminder to the players that he’s been there and done that and could still whoop ass on the pitch if need be.

Murphy: It takes a confident man to wear skinny pants, but it works for Klinsmann!

Rigg: Klinsmann must have found this leftover in Bob Bradley’s locker. (Though he still somehow pulls it off. For a balding ex-player verging on 50, he still looks damn good in just about anything.) Listen, I get it. There’s a bunch of team gear around, you’re moving around on the training field, and it’s got to be comfortable as hell. But I’m on Team Alexi [Lalas] here. Once you move to the touchline during a game, let’s look sharp, coaches. You’ve got 18 or so guys in athletic gear. Someone needs to represent the nation (or club) with a touch more class.

Working the sidelines in pants and a button-down

Friedlander: People who don’t work in fashion have this idea that girls are running around in six-inch heels. Homey, we’re in flats. We’re in Supergas. This guy looks like he just got done with an investor meeting, rather than like someone ready to coach. Where is his sweat going in that silk-cotton mix button-down? With that said, I’d love to go on a date with him, or see him in a Theory advertisement.

Herbst: A nicely rolled sleeve! The watch looks a tad too oversize, but overall the relaxed pieces seem to fit well — a good look for pacing along the sideline.

Hooper: I’m once again going with SoCal casual here. Tonal shades of blue for his pants and shirt with what looks like a desert color sneaker. The sneakers make this work by providing contrast. It’s an effortless look that would be at home at dinner in Los Angeles as well as on the sidelines. Just compare his look with that of the other manager. Easy win for Jurgen here.

Murphy: The shirt and pants are very classy, but then we reach the shoes …

Rigg: Are those suede boots? I’m not sure, but I’d buy a pair. Also, those rolled-up sleeves.

A crest on the chest

Friedlander: Ralph Lauren? Calling Mr. Ralph Lauren. Open Photoshop. Crop logo off sweater. Insert American flag.
Herbst: Not an outfit that inspires much of a reaction. Let me see … the sweater looks cozy? And his hair needs a trim.
Hooper: Some of Jurgen’s looks really just remind me of California. Pocket tees, fitted chinos, sneakers with everything. And then there’s this. This is one of those outfits that you would put together when running to the grocery store real quick. Nothing wrong with it. Mad casual. Good fall colors here, too!
Murphy: Love! Great look for a sharp-dressed coach.
Rigg: Here’s my qualm with this outfit: He keeps going on TV with it. Everyone else in the TV world is wearing suits. It’s not dressy enough to hang with suits, and because it has long sleeves, it’s not dressed down enough to be subversive. It just looks awkward, like he didn’t know they were going to film him that day. Aside from that, I like the white trim, not so much the prominence of the crest.

Put me in, coach

Herbst: Cool, sporty look! I prefer sportswear in solids, like this outfit — seems a tad more elegant. The pants look right at home on the soccer field.
Hooper: My least favorite way to see a coach on the sidelines. I realize you’re coaching a sport, but you will not be taking part in the action. And you are representing a country. No sweatpants or tracksuits should be allowed here.
Murphy: Somebody rolled out of bed and threw the nearest pile of threads on!
Rigg: Bob Bradley saw those pants and said, “See, I could have done his job for cheaper.”

The return of the blue button-down

Herbst: Layering! He hits all the big notes by mixing colors and textures.
Hooper: J.K. seems to love the light blue Oxford. It’s his go-to when dressing up. You can’t ever go wrong with it. It’s a staple. But I’ve never been a huge fan of seeing coaches wearing suits on the sideline only to have an athletic parka/overcoat on top. I get it. It’s probably cold, wet, windy, or some variation of the three. But there are other jackets that would be very fitting and stylish to go over that most likely very expensive suit underneath.
Murphy: Is it possible that 80 percent of Jurgen’s closet is blue dress shirts? The jacket is a nice sporty touch, though.
Rigg: This is essentially his presser outfit (pale blue shirt with a dark blazer), except he got a little cold and found a jacket.