#HotSportsTakes: There’s Something Not Right About Lefty 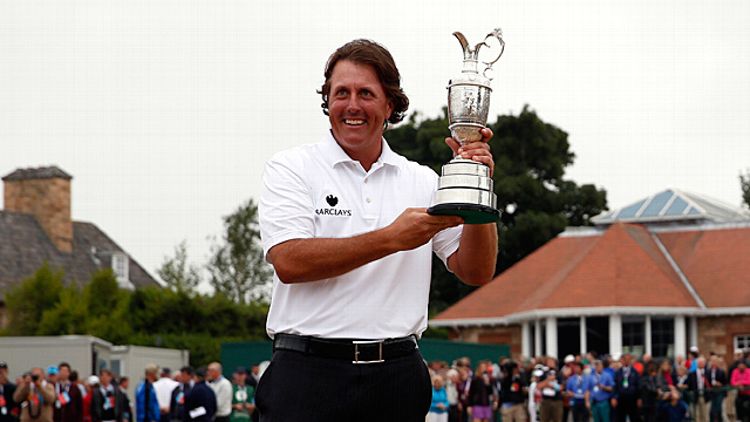 Every now and then, we will attempt to write the worst sports column on earth. Today: Let’s talk about Phil Mickelson and what comes next.

GULLANE, Scotland — Phil Mickelson delivered a round for the ages on Sunday. You want clutch? How ’bout a bone-chilling 66 to rally back and win the British Open. You want highlights? Phil birdied four of the final six holes on Sunday. Pick one.

“The great players just seem to be able to pull it off,” Paul Azinger said Sunday. “Think of the shots Phil Mickelson’s hit coming down the stretch. He is a true champion.”

That’s right, a true champion. Phil’s impressed me. He’s got nothing left to prove to any of us.

But as I watched the magic unfold on Sunday, I kept coming back to a nagging question.

Is Phil an honest champion?

Is Phil a fraud?

I’ve loved Lefty for years, but watching him these days has gotten more complicated. In the age of Johnny Manziel and Tiger Woods, I can’t help but look at Phil’s easy grin and happy family and wait for the other shoe to drop. Phil Mickelson’s a millionaire, a celebrity, and his whole career has been built on the image of a family man who’s just like the guy next door. But … what if you put the guy next door in Phil Mickelson’s shoes?

If you gave Joe Six Iron a million dollars and made him famous overnight, do you think he stays loyal to his family? Does he follow all the rules even when they don’t apply anymore? Doesn’t his moral compass start to cut a few corners?

Call me crazy, but don’t call me naive.

I watch Phil Mickelson boom drives into the sunset, and I see the shadow of a legend. No, not Tiger Woods. That’s too easy.

Tiger and Phil may play the same sport, but they’re cut from different cloth. Tiger’s the caustic brat, cursing up and down the golf course. Watching him struggle this weekend was almost poetic after the way he betrayed the game’s honor code at Augusta this year. After everything Tiger’s been through, he still can’t outdrive the demons.

Lefty has always been a breath of fresh air next to all that.

Phil plays the game the right way. He bleeds humility at every turn, and more than anything, when you watch Phil Mickelson, you’re watching a guy who’s just having fun out there.

Brett Favre spent years as the guy you just couldn’t help but root for. The guy who brought out the kid in fans, announcers, and everyone in between. You remember, don’t you?

Those were the golden days. When Brett Favre was playing quarterback for the Green Bay Packers, you made a point to sit down and watch.

The gunslinger took risks, he loved his teammates, and he never knew how to quit. For 10 years, he was America’s favorite player. When he couldn’t win a Super Bowl, we all suffered right along with him. When he finally broke through, it was like we’d all won a ring. Then one morning we looked up and blog articles were all over the Internet with X-rated pictures of a fallen hero who shoulda known better.

Just like that, our dreamboat quarterback was living a nightmare. We all were.

Maybe Phil Mickelson has already made those mistakes and we just haven’t heard about it. Or maybe not. All I can say for sure is that I’ve been writing columns for a long time, and Phil looks awfully familiar. The hero we can all agree on. It all seems too good to be true.

Guess what, folks: In this business, it usually is.

We get these star athletes with the backstory you can’t help but love, we build them up to be king of the world, and then we tear them down when it turns out they have flaws like the rest of us.

Can we skip this round with Phil Mickelson?

I don’t want to ask for a mulligan in 18 months when we find out it was all a lie.

Instead of fairy tales, let’s face facts. For one thing, we live in the age of performance-enhancing drugs, and over the past few years we’ve seen Phil Mickelson transform himself from a flabby runner-up to a well-oiled winning machine. Do you need me to connect the dots for you? Or maybe it’s his personal life that has you wondering. Sand traps and water aren’t the only hazards on the PGA Tour, you know.

Phil Mickelson has spent his entire career trading on his integrity and a smile. If it charms millions of Americans every Sunday, I bet it works on the ladies, too. It sure worked for Favre and Tiger.

Then someone talked to the media, the media caught the scent of scandal, and the sharks started circling to take down the big fish we’d been worshiping for years.

Well, I’m not taking the bait this time.

It’s not too late to be honest with yourself about who Mickelson really is. The golfer next door probably has a few secrets too. Probably cuts a few corners. Doesn’t always rake the sand trap. But Joe Six Iron isn’t under daily scrutiny, with the power to make much bigger mistakes and get away with it all. Whether it’s PEDs or X-rated pictures or some other bogeyman.

That’s Mickelson’s world now, full of temptation. Now that he’s a true champion. And it’s only a matter of time until it comes crashing back to earth. I guess I’m just here to yell “FORE!” so that you can all prepare yourselves.