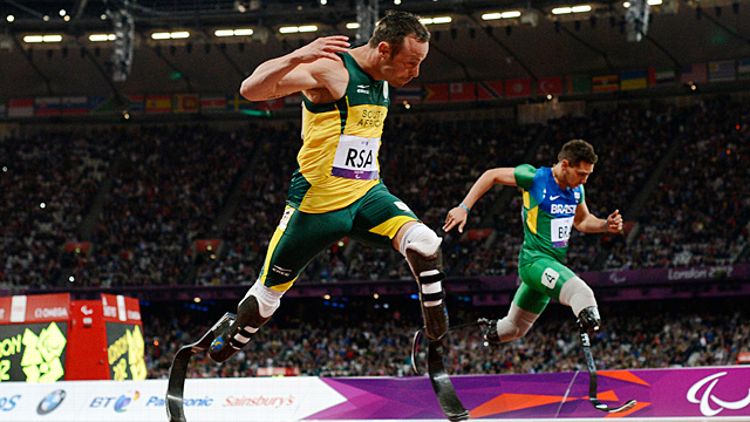 The Olympics and Paralympics have been a dream come true for advertisers. The London Games have been short on scandal and long on inspiration, generating a feel-good factor in Great Britain that has been eagerly co-opted by companies seeking to bask in the reflected glow of Olympian glory. An endless stream of British athletes walking out of the arenas with gold medals around their necks has provided the advertisers with plenty of fodder for their campaigns, but up until Sunday night, it was Oscar Pistorius that they really wanted selling their wares. Pistorius was perfect, straddling both the Olympics and Paralympics with his personal story of triumph over adversity, unbroken record of success, and admirable humility. Then this happened:


Well, he’s still got the triumph over adversity thing going for him. The other two attributes took a bit of a knock following this defeat, which was his first loss in the T44 category over 200 meters. Not only did he lose, but he’d barely stopped running before he grabbed the nearest microphone and declared that his conqueror, a 20-year-old Brazilian called Alan Oliveira, had an unfair advantage. “The guy’s legs are unbelievably long,” Pistorius claimed. “You can’t compete (with his) stride length … we’re not racing a fair race here.”

The ironies abound. Pistorius has long been at the center of allegations concerning his own prosthetic limbs and the possible unfair advantage they may confer to him in competition with able-bodied runners. He’s spent the last six years refuting these claims, so you would think that he would be a little more careful about making such accusations of other Paralympians, but in the heat of battle, having just experienced his first defeat in eight years of Paralympic competition, you could forgive a rash moment of ill-considered bad sportsmanship, right?

Maybe not. The next morning, Pistorius issued a classic non-apology, in which he expressed regret for the timing of his remarks but reiterated the content of them. Pistorius acknowledged that Oliveira’s blades were within the limits defined by the IPC (the sport’s governing body), but insisted that the Brazilian still had an unfair advantage, and that the IPC needed to address “the issue” — that issue being that a month earlier, Oliveira had switched to a new set of blades that were four centimeters longer, and Pistorius stood by his assertion that he couldn’t compete with his opponent’s newly extended stride.

There are two major flaws to this argument. The first is that Pistorius clearly has no trouble competing with Oliveira’s stride length, as he set a world record of 21.30 seconds in the heats the day before: a time that would have won the final by fifteen-hundredths of a second. The second flaw is even more damning, though: Pistorius took 92 strides in the final, with an average stride length of 2.17 meters. Oliveira took 98 strides, which were on average 13 centimeters shorter than those of Pistorius. On the face of it, it’s hard to make an argument for stride length being the deciding factor in Oliveira’s victory, but Pistorius seems keen to pursue the idea.

Is this perhaps because he’s spent the last six years being told that every time he beats an able-bodied competitor, it’s because his blades have given him an unfair advantage? It seems that Pistorius is now so embattled in the constant war with his detractors that he’s unable to view his own track performance in athletic terms, and so his first defeat in Paralympic competition can only be explained through technological means; certainly not through his opponent’s athletic strengths, or for that matter his own failings. What’s more, Pistorius will also be keenly aware of his role as an ambassador in these games and the limitations that role places upon him.

Ambassador is the most overused word of these Olympics; spend a day in London in the last month and you’ll have heard more about ambassadors than you would watching all seven seasons of The West Wing. They’re everywhere you look, from purple-shirted ambassadors giving directions to foreign visitors, to Paralympic ambassadors decked out in the colors of Team GB who are selling products on advertising hoardings all around the country. There’s nothing especially unusual about this (advertisers have been using the word ambassador to dupe British people into buying stuff we don’t want for a very long time), but in addition to his duties as a corporate ambassador, Pistorius has also had to act as the Paralympic Ambassador to the able-bodied Olympics, and the job description for that role is quite specific. Paralympic contestants in the able-bodied Olympic Games should avoid scaring the natives by doing things like maxing out the length of their blades, high-fiving stilt walkers, or announcing that Tigger was always their favorite resident of Hundred Acre Wood. If you want to compete, keep your head down. Blend in. And pretend that you’ve never seen the film Blade Runner and don’t know the plot.

Pistorius clearly takes these duties very seriously, which is the reason he runs on blades that were designed 15 years ago and have remained unchanged ever since. His fellow Paralympians are under no such constraints, and are free to take advantage of every inch of blade and technological advance that the IPC rulebook allows. It’s testament to the growing prestige of the Paralympics that young, up-and-coming athletes like Oliveira aren’t worried about scaring the able-bodied runners; all they want to do is beat Pistorius, and they’ll exploit every advantage they can to do so. Meanwhile, Pistorius appears to have been taking his supremacy over his Paralympian opposition for granted, and so it’s not altogether surprising that Sunday’s defeat prompted a distinctly unambassadorial response.

The good news for us spectators is that this saga is far from over. Pistorius and Oliveira will renew their rivalry at 9:24 p.m. tonight (4:24 p.m. EDT) for the 100-meter final, and then again on Saturday for the 400-meter. The latter is Pistorius’s specialty — the only way he’ll be beaten there is if he false-starts or falls over — but the 100-meter will be a fantastic and fiercely contested race. Pistorius has qualified for the final with a time of 11.18 seconds, which may be his fastest time of the year, and four-hundredths faster than Oliveira’s personal best, but there are five other athletes in the field who have run faster than that this season. The USA’s Blake Leeper (whom Pistorius accused of being four inches taller than usual on Sunday night) ran 10.91 seconds earlier this year, but the favorite will be Great Britain’s Johnny Peacock, who has a personal best of 10.85 seconds. Pistorius isn’t just going into a Paralympic final as an underdog for the first time in his career, there’s also a very real chance that he may not even win a medal; getting revenge over Oliveira will be the least of his worries. One thing’s for sure: win or lose, Pistorius’s post-race interview should be worth hearing.