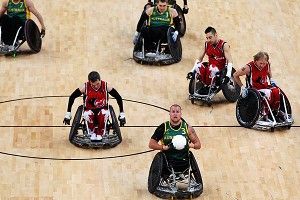 Today’s the day, folks; the Paralympic murderball tournament has begun, and I’m about to tell you why you should be watching, but first of all, we need to clear one thing up. The governing body of the sport may have changed the official name of murderball to “wheelchair rugby,” to make it sound more palatable to corporate sponsors, but this is a wildly inaccurate description of the sport. I’m sticking with the original name. Murderball is fast-paced, free-flowing, high-scoring, and exciting to watch; in other words, all of the things that rugby is not. It’s more accurate to think of murderball as a cross between basketball and a demolition derby, and if that doesn’t sound to you like a recipe for one of the best spectator sports ever, then fair enough, but before you decide to pass on watching murderball, I just want to make sure that you know what you’re missing. Observe:

Australia’s Ryley Batt there, showing a little love to one of his own teammates in a training session. Now, I don’t want to give the impression that murderball is just about guys in wheelchairs smashing into each other at 20 mph, because that would be selling the sport short. There’s a lot of skill involved, and the tactical dimensions of murderball are fascinating, and these factors are part of what makes it such an excellent spectator sport. If you want tactical depth and nuanced strategic battles, then murderball can provide those things, but it also provides copious amounts of high-speed wheelchair collisions with competitors being thrown through the air, dumped on their heads, and generally battered and abused for our entertainment. Truly, murderball has something for everyone.

Here’s another clip of Ryley Batt (widely recognized as the world’s best murderballer) in action, this time against the USA:

This clip illustrates two things. First, the extraordinary speed and power of Batt, who has to get around a stationary defender and then make up five yards on his opposite number in order to make the hit, and second, the fact that murderball has rules. Batt was sin-binned for that challenge, as he deliberately flipped his opponent by ramming the back of his wheel, which is one of the very few things that is outlawed in murderball. Most of the rules concern time violations; you must pass or dribble the ball every 10 seconds, you get 12 seconds to advance the ball over the halfway line, and a total of 40 seconds to score, which is achieved by rolling over the goal line while in possession of the ball. Each side has four players on court at a time, and the game is divided into eight-minute quarters. Finally, there are restrictions on the level of ability of the team; each player is assigned a point score based on the severity of their disability, from 0.5 (least able) to 3.5 (most able), and you are allowed a maximum of eight points on court at any one time.

It’s hard to exaggerate how important points classification is to the sport’s tactics. You will see some teams employing a high-low strategy, where two 3.5-rated players and two 0.5-rated players take to the court, with the 0.5-rated players taking on defensive duties, while the more able players assume the ball-handling responsibilities. This is a risky tactic, as the opposition can stifle an offense by shutting down the two 3.5-rated players, forcing them to pass to their less-able teammates, which leads to handling errors and turnovers. Other teams will lean towards a more balanced team selection, which adds greater flexibility on offense, but runs the risk of being literally out-muscled when defending against more able opponents. That’s a particularly big risk when playing Australia, who boast the most feared 3.5 player in the game in the form of Ryley Batt, and like to play him in a high-low setup alongside fellow 3.5 Chris Bond. Great Britain (who tend towards a balanced approach) discovered this, to their disadvantage, in the pretournament test event held in April, where they played Australia twice. The first match was in a meaningless dead rubber at the end of the group stage. Australia rested Batt, and Great Britain sneaked a 52-51 overtime victory. Batt returned for the tournament final between the two teams, and scored 30 points in a 71-48 shellacking of the Brits. He really is a terrifyingly effective weapon, but any side employing a high-low lineup has the potential to wreak havoc on a defensively undisciplined side.

Perhaps unsurprisingly, given the amount of time that competitors spend trying to damage each other, there are some fierce rivalries in the sport. Australia has scores to settle with the USA, who beat them in the final of both the 2008 Paralympics and the 2010 World Championships. The USA is another side who likes to employ a balanced team, but their tactical discipline is second to none, and they’ve repeatedly demonstrated their ability to cope with Batt and Bond.

Team USA has another, older rivalry on their minds; the battle for supremacy between the USA and Canada has been raging for over a decade now, and was even the subject of an Oscar-nominated documentary, 2005’s Murderball, which followed the fortunes of the two sides as they pursued gold at the Athens Paralympics. The story begins in 2002, when the USA side, unbeaten in international competition for the previous seven years, were finally bested in the World Championships by a Canadian team coached by Joe Soares, a former member of the USA team with an enormous grudge against his old teammates. It’s fair to say that things got ugly; I won’t spoil how it ends, but along the way, Soares spent so much time screaming from the touchlines that he gave himself a heart attack, which should give you some idea of the intensity of the rivalry between the two nations. Soares has moved on (he now coaches the German team), but several stars of Murderball from both sides of the border will be competing this year in London, and they’ll be desperate to get one over on their old enemies.

With the USA currently top in the world rankings, Canada holding second place, and third-placed Australia in tremendous form, the battle for gold will be intense; Great Britain will also be in the hunt for medals, spurred on by a very vocal crowd, and Japan and Sweden are more than capable of causing an upset to the favorites. This looks poised to be one of the most keenly contested gold medals of the summer. You can watch all the action’s being streamed live on the Paralympic.org website; and you can see the tournament schedule here.