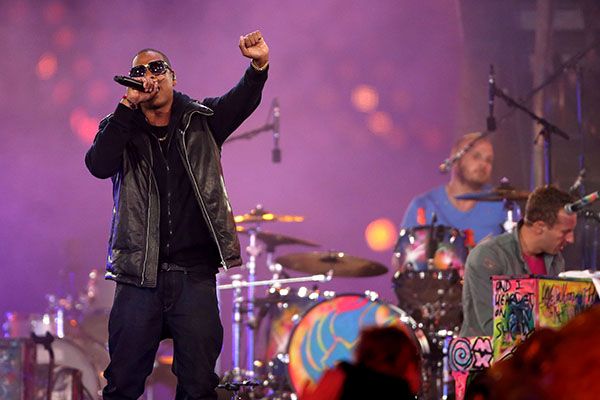 Good news! There’s a new Jay-Z verse. Not as good news! It comes to us as part of the guy’s latest collaboration with his BFF Chris Martin’s band, Coldplay. Good news! It’s all in the name of positivity and such, seeing as it was delivered last night in London during the 2012 Paralympics Closing Ceremony.

While Coldplay was the main event, Jay popped up a couple of times: first to lay down “Run This Town” alongside Rihanna (who’d shown up earlier to do her own Coldplay collabo, “Princess of China”) and an army of sexy post-apocalyptic warriors, then to tack on his new 16 onto Coldplay’s “Paradise.” You can check out that new verse, which shouts out Gabby Douglas and her fellow sporting types, here:

And also make sure you click over to Life + Times, where Hov has helpfully decoded the words: “It can relate to everybody. ‘You can take everything,’ means whether through some tragedy you lost a limb, like an arm or a leg. Or, it could be something like you lost the mortgage to your house. That’s pretty much the idea.”

And, if you have, like, two hours to kill, here’s the whole thing:

One tiny quibble — how could Jay not have shouted out Oscar Pistorius, the South African sprinter who competed in the Paralympics and the Olympics, in his “Paradise” verse? I mean, come on — the guy’s name rhymes with victorious.