Let’s Have a Chat About the Breaking Amish Premiere 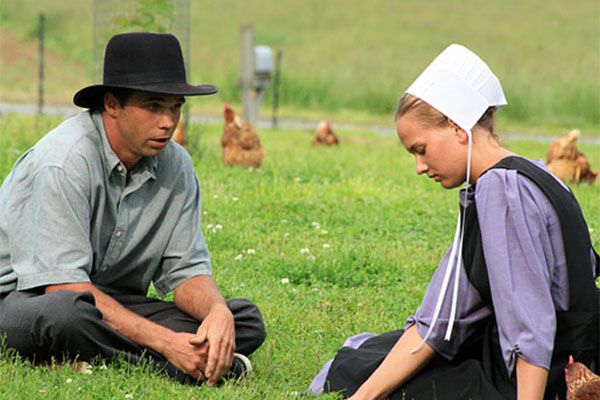 There was a football game on television last night, and I’m willing to bet many people watched it from start to Ben Roethlisberger–interception finish. For better , I am not one of those people, because the soon-to-be breakout show of the fall television season decided to rear its non-electricity-using head.

That show is Breaking Amish.

Five young people (four Amish and one Mennonite) who make the tough decision to leave their restrictive communities for life in New York City.

Is this a tough decision?

Let’s just say that you (non-Amish reader) have never made a tougher decision in your life. It’s like that scene in ATL when New New tells her dad that she wants to go to Spelman College instead of the (fictional) Brinton College. But 750 million times more intense.

How do the families take the news?

Think back to the most intense side-eye you’ve ever been given, then (again) multiply that by 750 million. Each family handles it differently, in the sense that the responses are varied degrees of “You’re shunned, good-bye forever.” Essentially, once the New York–bound individuals make their decisions, they’re accepting the fact that they will never be allowed back to the villages where they were raised.

Are the kids sent off with hugs, kisses, and sappy good-byes?

No. More like “get your stuff and leave.” It’s all very Probstian.

Is the first episode sad?

Will this show get increasingly un-sad?

ONE HUNDRED PERCENT. I CAN’T WAIT.

How do you know? They’ve only aired one episode.

At the end of the episode, they did one of those “Here’s the crazy drama that will happen in the rest of the season” montages, which I think was invented by Real World and perfected by the Real Housewives franchise.

What did you catch in this montage that caught your attention?

Well, there was a bikini photo shoot. And a strip club. And make-outs. And fights. And unexpected family visits. And name-calling. And first drinks. And first shots. And a DUI. And pillow fights.

How would you best compare the transition from Amish country to New York City?

It’s like watching Bob Ross paint an apple, and then flipping the channel and landing on the Love and Hip Hop Atlanta two-part reunion special.

Can you, Rembert, become Amish?

Still unclear, but I don’t think so. This show is whiter than the Minnesota Timberwolves.

Only in the sense that they both remind me of the Minnesota Timberwolves.

Who’s your favorite cast member so far, who’s the breakout star, and who’s the sleeper pick?

Right now, my boy is Abe, because he handled his departure pretty matter-of-factly (“I’m leaving, what of it” followed by a series of DMX barks, or something like that), and I can’t help but respect that. The breakout star in this show is, without a doubt, Kate, who unfortunately already has a DUI and looks as if her NYC experience is going to mirror that of a college freshman girl who has an affinity for “need 1 for beer pong” requests from hockey players and late-night mozzarella sticks. The sleeper: Sabrina, who is seeking out knowledge about her Puerto Rican and Italian roots; it’s impossible to not become emotionally invested in her.

Once the fun and games of New York City wear off, will this show get sad again?

Undoubtedly. I’m not excited about that, because there will be tears. Toy Story 3 tears.

Any previews for the second episode?

Anyone who wants to play Fantasy Breaking Amish, let me know. This “fantasy football” thing has already come and gone, seeing as that my genius plan of starting Vick over Peyton and trading David Akers for Timothy Richard Tebow didn’t work out too well.

A Guide to the Rest of Ryan Reynolds's Romantic Career