Let’s Have a Chat About Breaking Amish Season 1, Episode 2 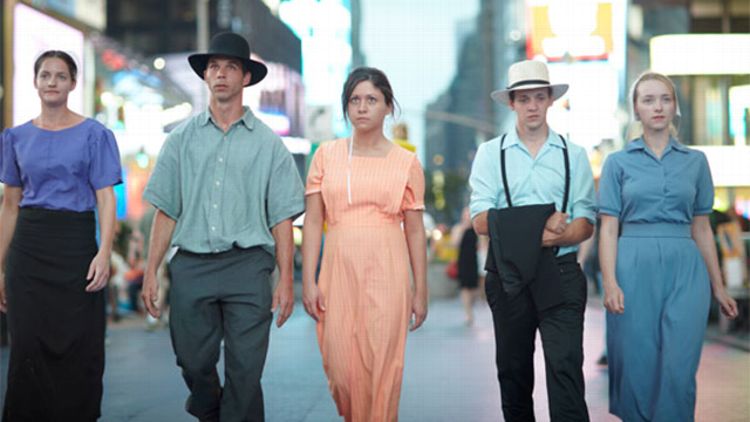 Last week, a show seemingly came out of nowhere and rocked my fall, as it surely did for anyone else with the ability to care about Sunday TV of the non–Walter White or American football variety. That show is Breaking Amish, and last night it aired its second episode, meaning there are many things to talk about.

Sort of. I mean, no one has fought yet.

Let’s try that again. Do they like each other?

Not at all. This show could produce some legendary beefs. First there’s the boys, Jeremiah and Abe:

“Some very weird, weak Amish kid, that never really had to work.”

Wow. How about the ladies?

But Rebecca? Not so much. To put it plainly, Rebecca is not a fan of Kate.

Why? What did Kate ever do to Rebecca? They just met!

Because allegedly, Kate is a legendarily hot Amish girl. Like, people know far and wide that Kate is the hottest Amish girl in Amish history. She’s like the hot incoming freshman that everyone knows is hot because she posted her photo album “Summer ’05 at the Beach with ma gurls” three weeks before orientation and every freshman boy made their way to school in search of her and every freshman girl made their way to school to shun her entire existence. That’s Kate.

What does Rebecca have to say about Kate?

How much time do you have? There’s this:

Then, upon seeing Kate for the first time:

“I was like, ‘Where is this gorgeous, outrageously beautiful girl? Where’s she at?'”

The first time I heard this, I thought these were self-deprecating comments on Rebecca’s part. Then, after watching the episode a second time, I realized that this was Rebecca not thinking Kate is as hot as everyone made her out to be. Rebecca thinks that she is hotter than Kate. I love that.

Anyone else have thoughts on Kate?

Yes, but Rebecca has one more thing to say:

“I HOPE SHE DOESN’T LIKE ABE. I hope she doesn’t screw that up.”

That’s amazing. So Rebecca has a crush on Abe. That means there is some non-beef flying around, beyond Kate and Sabrina’s Ab Fab friendship. Are there any other signs that this is going to be a good old-fashioned cupidspringa? This is like the televised version of coed-sleep-away-no parents-camp, right?

Yes, especially for Rebecca, seeing as one of the boys has a crush on her. And it’s Abe. He was doing some tactical arm-over-shoulder comforting on the bumpy plane:

And then he just came out and said it:

And then he really just came out and said it:

Abe: “One of these days, I’ll ask Rebecca out, if I ever get enough courage gathered up.”

And in case you needed any other proof, he essentially took her off the market in one statement:

Abe to Jeremiah: “Sabrina or Kate, you’ve got to pick one.”

That’s so good. By not even offering Rebecca as a choice, he has taken her off the market, because that’s his BOO.

What about Jeremiah? One has to assume he’s got the confidence to go for Kate, right?

False. He’s got a crush on Sabrina. Unfortunately for him, the feelings aren’t mutual (she says she’s not attracted to him), but I have a feeling that’s going to change, once he musters up the funds to take her to dinner at Guy Fieri’s new restaurant, followed by a thrilling night at Jersey Boys, a Questlove DJ set, and matching tattoos.

So to step away from love for one question, it’s their first time in the big city. I assume they are encountering some “firsts.” Is this a fair assumption?

Amazing. Where are they staying in New York City? Do they try to make it vague, like in many reality shows?

You have no idea. I actually walked there last night, looking for Rebecca in the gym. Upon arrival, I was promptly stopped, because it was 12:30 a.m., and told to go home.

Are they getting a real taste of the non-Amish world after a few days in New York City?

Not at all. First off, for their first plane ride, instead of a large, commercial plane, TLC put these poor people on the Red Baron, flown by Snoopy.

Then they were placed only a handful of blocks from Times Square, the most abnormal place in America. But there’s more.

Telephones in the bathroom.

Rebecca and Sabrina have been led to believe that everyone has a cordless phone by the toilet. WHO HAS A CORDLESS PHONE?

The delivery of extra beds to a hotel room.

This isn’t a thing, Rebecca. She called for a third bed because she didn’t want to share a bed with Kate or Sabrina. You can’t just have another bed, you suck it up and spoon with your new best friend or arch nemesis. The decision for the hotel to comply with her demands will cripple her in non-Amish America for the rest of her life.

What about the real New York? Do they get how the city works?

No. Jeremiah on finally making it to NYC:

“I always thought driving a car would be cool. And now that I’m in New York, this is my chance to get my driver’s license.”

No, Jerm. The opposite is true. Now that you’ve made it to NYC, you can become a liability, like the rest of Manhattan-raised humans that go decades without learning to drive. I can’t think of anything more terrifying than going from Amish country to driving a car down Sixth Avenue during rush hour. That sends fear throughout my body.

Speaking of Jeremiah, how’s his language now that he’s out of Amish country?

“No more bishop looking after me. Fuck that. Holy shit, finally fucking free.”

Well, OK then. How about you, Abe?

On the ladies of New York City:

“Her ass cheek was there and her dress stopped right there.”

“I thought about throwing a quarter out and letting her pick it up.”

What’s their biggest rule-breaking activity of the episode?

Probably breaking Sabbath to go grocery shopping on Sunday. Not only is the act of grocery shopping against the rules on the holy day, but the items they purchased weren’t exactly praiseworthy.

Uh-oh. There’s no wilder gateway drug than Chateau Diana. But I guess a little wine never killed anyone.

I’m no expert in translucent bottled malt beverages, but is that a Smirnoff Ice?

Do they just start Icing each other by the end of this episode? If they do, that puts them more behind the times than the whole lack of electricity thing.

Not in this episode, but it’s bound to happen eventually. I seriously doubt that beverage is going to be poured into a glass and sipped.

Let’s talk about gender roles for a second. Do they come up?

I think this conversation pretty much sums it up:

Kate: Did you even get anything you want to eat?
Jeremiah: Me? No, it’s not my job to make the food.
Kate: It’s not my job either. I mean, I’ll make it for my room, but I don’t know who’s making it for your room.

No response. Why? Because this isn’t Punxsutawney anymore. Sorry, Jeremiah, that Y chromosome isn’t getting you anywhere. Also, Kate’s the legend. She makes once-confident men have shaky knees and shakier egos.

Anything else happen in this episode worth noting?

I think that’s it.

Are the other girls being respectful of her upon learning this?

Not at all. Sabrina and Kate’s wine session is almost solely dedicated to making fun of Rebecca. The best zinger knee-slapper of the bunch:

Sabrina: “Maybe she sticks them in her bra or something. What if they bite her?”

Sabrina seems amazing. She’s got that Mennonite dry humor that is second to none. GIVE ME ANOTHER ZINGER.

On Rebecca not being 21: “It’s not my fault she was born younger.”

Too good. That seems like a good place to wrap up this epis—

THEY FOUND HER DENTURES:

WHY IS THERE A LIGHTER WITH HER FAKE TEETH?

One has to assume that will be the focal point of Episode 3. Can’t wait.