Let’s Have One Final Chat About Breaking Amish 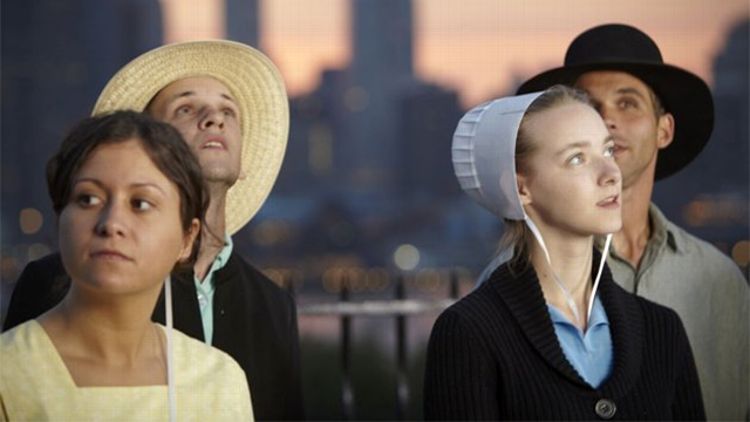 After the first two episodes of TLC’s breakout show Breaking Amish, I could barely contain my excitement when talking and writing about the show. Even with the full understanding that all reality shows had some staged aspects and scenarios (except for T.I. and Tiny: The Family Hustle), this show about five twentysomethings leaving their Amish and Mennonite villages for life in New York City seemed so genuine. They seemed adorably shocked by technology, appalled by some of the ways of the “English” (the term for non-Amish), and nervously excited to break out of their restrictive upbringings and carve out new lives for themselves.

Upon turning in my recap for the second episode last Monday, I took a deep breath and then began counting down the days until Episode 3. Would Abe muster up the courage to ask out his newfound crush, Rebecca? Would Rebecca’s fake teeth be explained? Will Sabrina and Kate’s entry into red-wine alcoholism lead them down the path to AA and lifelong friendship? These were the questions I couldn’t stop thinking about last Monday afternoon.

And then, the next morning, some interesting news began trickling in. First it was the Facebook group, “Breaking Amish The Truth.” The first post:

Whatever. Yes, this is a semi-spoiler to the question of whether or not Abe and Rebecca end up together, but there’s no proof that this undated photo was taken before the show. Also, who’s to say that’s even their baby? It doesn’t look like either of them.

The Facebook page goes on to detail other pieces of “evidence” that supposedly prove TLC is lying about the five cast members leaving their Amish/Mennonite worlds for the first time. There’s Sabrina’s marriage license from 2009, Kate’s modeling pictures from 2010, and Jeremiah’s MySpace page, which arguably couldn’t be post-2006. Again, it all raises the suspicion level of the authenticity of the show slightly, but the Facebook group still seemed a tad bit too Harold Camping for my liking.

But then the news media got wind of the Facebook group. Headlines:

And just like that, without even making it to the next episode, the show had gone from a breath of fresh air in the reality-TV landscape to one only Internet message board junkies saw as suspect to a show (and a network) that had some very real explaining to do. This was bad. How did TLC respond?

“There is a lot of information floating around about the group featured on Breaking Amish. Much of it is not true, but some of it is — and is addressed in upcoming episodes.” — TLC and Hot Snakes Media, Variety

Unfortunately for viewers like me, who were one more transgression away from suing TLC for being really rude and hurting my feelings, the “upcoming episode” in which this “information” was “addressed” was not Episode 3. And because of this, Monday’s episode of Breaking Amish is one of the least enjoyable, most pointless wastes of time ever to be put on television (and yes, this is the same “television” that has given us Bob Patterson, Brothers, and The Big Bang Theory). For your sake and mine, here’s an abbreviated, sassy recap of what happened.

The episode begins with a shocker: Rebecca’s grandfather and Abe’s mother show up at the hotel.

My reaction, if this were last week: “OMG this is going to be crazy. What crazy timing!”
Now: “Of course they showed up together, THEY ARE IN-LAWS.”

Over the next five pointless minutes, we see pleas from parents and grandparents for their loved ones to leave New York and come back, which is pointless because they’ve been gone for years. The only thing really worth noting is Abe’s mother’s take on New York, “Satan is all over this city,” which just seems a little bit dramatic, even on a show that is now being filed as a “realidramedy.”

Last week, Abe’s mother would have broken my heart. Lines like “just come home with me” and “it’s going to be really hard on me if you don’t come back” would have sent shivers down my spine and goose bumps along my arms, but now I’m trying to figure out if Abe’s even her son. I think there’s a 30 percent chance all of these people have SAG cards.

Some “firsts” from the episode:

I’m going to stop there, because I think the point has been made. Every time a surprised look comes on one of their faces, or the phrases “I’m not use to … ” or “Where I come from … ” leave a character’s mouth, it’s hard not to cringe, since you have to assume they’re lying through their teeth. It’s like when a little kid is lying, and you know they’re lying, but they don’t know you know, so they keep digging themselves a deeper hole, and you want to stop it but you can’t. It’s just like that.

Other happenings in the episode that should no longer interest you:

On faking a relationship:

Is there anything weirder than having a long relationship with someone you have a kid with, and then staging a new, nerves-filled, anxiety-riddled courtship on television? That’s the most absurd thing ever, right? Or am I missing the point?

Or is this one of those role-playing things that actually reinvigorates their relationship by adding a little spice to the daily grind of being a couple? Is that what’s happening? Once the cameras turn off, do they text their babysitter to make sure everything is OK and then make a grocery list? As someone who has never pretended to just meet someone that I have a child with, I’m completely fascinated by this act of deception. Hurt, but fascinated.

Not fascinated enough, however, to be emotionally invested in this show. What I am interested in, is to see exactly what TLC says about the obvious lies they’re putting on television. The most crucial aspect of reality television is not letting the public in on how “un-real” it all is. Yes, we can assume to our heart’s content, but without solid evidence that the stars of singing competitions haven’t been determined before the season, that brawls aren’t choreographed on the VH1 lady-fighting-geographical-athlete-relationship shows, and scripts aren’t handed out before every episode, there’s always some belief, large or small, that what we are seeing is moderately “real.”

It looks as if Breaking Amish has failed that most important test, and let me tell you, if you thought reality television was bad, try un-reality TV. There’s never been anything worse.