Breaking AMAs: A Running Diary of the Breaking Amish Reunion and the Last Hour of the American Music Awards 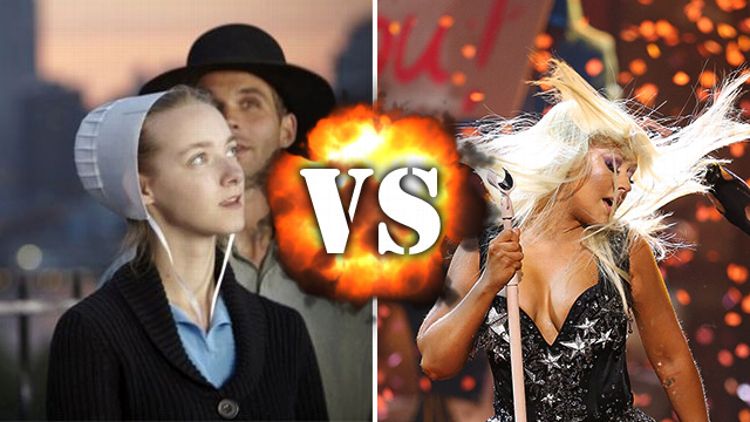 10:00 Christina Aguilera is performing on the AMAs and it’s terrifying. Absolutely terrifying. And my TV’s on mute.

10:01 Breaking Amish, how I’ve missed you. It’s been a while, you lying fakers. Also, hello host of the reunion special, Michelle Beadle. I have a feeling this is going to get ugly. I hope you’re ready, Beadle.

10:02 They’re starting to show the Facebook posts where people uploaded information about the cast members’ past. I hope they do more than show them. I WANT ANSWERS.

10:04 Abe: “I want to thank all the viewers that started watching with an open mind.” Oh, you mean like me. I guess you’re welcome? Do I get a Part 2, in the form of an apology? SPOILER ALERT: NO.

10:05 Abe: “All the people trying to destroy us are ex-Amish.” Wow. “Destroy.” That’s one of the strongest words out there. Don’t know if I’ve ever accused anyone of attempting to “destroy” me. That’s a word you use when you’re trying to overthrow a monarchy. A group of reality stars? Seems a bit much.

10:06 Whoa, Abe and Rebecca got married? Wow. After nine episodes? That’s really not helping the whole “we weren’t an item before the show” rumor, you know, getting immedi-married and all.

10:07 Abe: “I did the show to educate people about the Amish” and “show that they aren’t these perfect Christian people.” Interesting. This is a show about whistle-blowing. Very interesting.

Also, Jeremiah speaks for the first time, which kicks off our first “Beadle Beef” (first of many).

Beadle: “Where you practicing Amish?”

Jeremiah: “What do you mean ‘practicing Amish’?”

More beef to come. From this conversation, we do learn that Jeremiah did, in fact, leave the Amish community several times before the show.

10:09 Commercials on the AMA channel too. This wasn’t part of the plan. I can’t lie though, a Mountain Dew commercial followed by an Old Navy commercial is making fifth-grade me freak out right now.

10:10 Next commercial: Nashville spot. Hayden is singing a song, and it’s not ending. It’s like an awkwardly long music video within the commercial, like an episode of Jem. This is bad.

10:11 Finally, back to AMAs with a 2003 flashback moment, with Kelly Osbourne sitting on Justin Timberlake’s lap and Jack Osbourne on Britney’s. Sharon and Ozzy are onstage, and the phrase “Busta’s here somewhere” just came out of Sharon’s mouth. This is amazing.

10:12 Back to Breaking Amish. Not mad, but really trying to get some AMAs in at some point.

10:13 Beadle’s talking about Sabrina, and apparently during the season she found her father. That’s pretty awesome. A bright spot in the otherwise tarnished season. UNLESS THAT’S NOT EVEN HER DAD. I still can’t believe anything. Not yet.

10:14 Sabrina, defending her scandal-filled wedding that Internet rumorologists dug up: “I know my wedding pictures were released, but it was a Mennonite wedding, there was no dancing, no booze.”

10:15 More Sabrina, after Beadle asks about divorce: “Am I proud that I was married to him? HECK YEAH.”

It is at this point that Beadle pulls up another picture of Sabrina and calls it “not a Mennonite-type picture,” and that gets everyone excited.

10:16 Beadle has moved on to Rebecca and her bikini pictures.

10:17 Rebecca: “Nobody was supposed to find out.” And then Rebecca says she snuck out. How does Beadle respond to this news? “You’re sneaking out in this picture.” She’s really toeing that line between “reunion host” and “your friend’s super-judgmental mom.”

10:18 Rebecca: “I’m wearing a bikini because I snuck out and never told anyone because nobody needs to know.” And just like that, for the first time, I’m kind of on the side of the cast members. Didn’t see this coming.

10:19 Beadle turns to Kate and immediately gets into her disputed modeling past, along with her DUI. Kate’s response to the modeling: “There is a picture of me on a website, I’m sure you’ve seen it.” My roommate: “What’s that URL though?”

10:21 Commercial break, but the preview for the next part seems to show everyone coming at Beadle. Excited for that.

10:23 Tired of AMA commercial breaks, back to TLC.

10:24 Wait, WHAT. There’s a show on the Discovery Channel coming out called AMISH MAFIA? 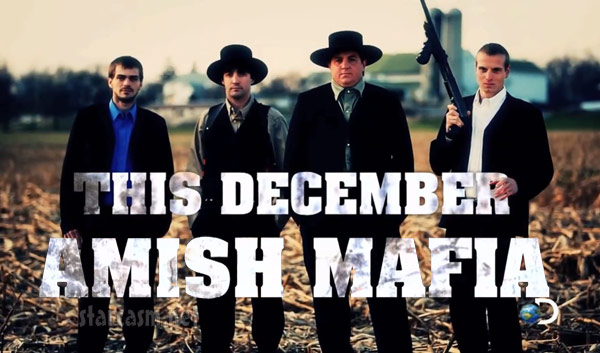 You have to be kidding me. I thought I was done with the Amish, but apparently this was just Act I.

10:25 Back to Breaking Amish. Now Beadle’s turned her attention to Jeremiah, who has been noticeably quiet for most of the reunion. Apparently he’s got three kids and his ex-wife has made some serious accusations about him being abusive and owing child support.

10:26 Jeremiah’s response: “Supposedly, I was abusive. I have one thing to say to America: Do your freaking homework.” (“Do Your Freaking Homework”/#DYFH count = 1)

After this, Beadle asks where the children were, which prompts him to tell a story, filled with awkward pauses, about his family life. At this point, Beadle hits him with another zinger: “You’re angry. Why are you angry?” Jeremiah’s reponse:

10:27 Beadle keeps pressing him, causing Jeremiah to retort, “Did you ever mess up in your past?”

This is getting ugly.

10:29 FINALLY, some AMAs, but of course the first person I see is 50 Cent, presenting some award. The nominees: Drake, Nicki Minaj, and Tyga. This is a horrible moment in music history. I never should have changed the channel.

10:30 Nicki wins. And then, to make matters worse, she brings up Tyga, who decided to dress like a bottle of Trappey’s Louisiana Hot Sauce. 10:31 Before going to commercial, they told us that coming up was a Dick Clark tribute by Stevie Wonder (YES) and “Gangnam Style” by Psy and an “internationally known” artist (NOOOOOO).

10:32 A Sleep Number commercial. This is oddly calming. I kind of hope this goes until eleven o’clock.

10:33 Back to Amish and we’re now talking to Abe, who apparently proposed to Rebecca by writing a note in the dirt.

10:34 Also, something else that happened during the season was during his bachelor party, Jeremiah and Sabrina got him strippers and Abe flipped and left his own party. Abe: “I specifically said NO STRIPPERS.” I respect him for standing by his values. 2 Chainz would not.

10:35 After that, Beadle dips into some Abe-related Interent rumors about his arrest. “I got arrested for underage drinking,” Abe says, then says his parents never found out about it.

10:36 “Well, they’re going to know about that now.” Classic Beadle. I genuinely can’t imagine getting patronized like this. It’ll be a miracle if one of them doesn’t take a swing at her in the next 24 minutes.

10:37 Our next segment is about Jeremiah’s inability to understand why a woman wouldn’t always do his laundry. Apparently his chauvinism was a recurring theme of the show.

10:38 Beadle asks Rebecca, “Is there anything out there you want to address?” There is. Rebecca wants to clarify that her teeth weren’t pulled as some cruel form of Amish punishment (which would have easily been the worst thing ever), stating that she had them removed because they were in bad shape. When asked when that took place (very odd question), she says she can’t really remember (even odder answer; trust me, I’d never forget the exact date that I decided to get all of my teeth removed).

10:39 Oh hey, Carrie Underwood. Always pleased to see you winning awards. Her June Carter Cash vibe is undeniable. “I couldn’t like my life more than I do right now.” She’s the best.

10:40 Time for the tribute, and to introduce it, out comes Ryan Seacrest. Makes sense.

10:41 After a nice intro, he cues Stevie Wonder, who, in classic Stevie form, gives a minute-long speech about love and peace and stuff before singing. And since we aren’t allowed to say anything rude about this, because he’s more than earned his non-linear speech privileges, it’s amazing.

10:42 He starts into “Master Blaster (Jammin’)” complete with a Dick Clark slideshow behind him. This is great.

10:43 It’s been three minutes, and I know Breaking Amish is about to come back on. But Stevie is performing. This is the worst. Changing Stevie seems blasphemous. I wasn’t raised to changed the channel right now, but —

10:44 Beadle’s in her accusatory home stretch, now focusing on the biggest scandal of the show: Abe and Rebecca and the extent to which they knew each other (and were in love with each other, and potentially already married with child) before the show began. The Facebook picture that started it all:

Rebecca: “Well, you know what, this is what I have to say about that” — this is what we call stalling — “I can’t talk about [the baby], because I didn’t sign her up for the show.”

Abe: “We were friends for a long time.”

10:45 Beadle: “I’m just telling you, the Internet is a tough place.” The cast tells Beadle that she, and, in turn, the Internet, can think what they want.

Beadle: “What was the deal going into this show, with you two?”

Rebecca: “Don’t you watch the show?”

“I’m very defensive when it comes to my daughter.”

“If you want to keep talking, that’s fine, because we’re not going to listen.”

10:49 They made a Michael Jackson BAD 25 documentary? Directed by Spike Lee? AND IT’S AIRING ON THANKSGIVING NIGHT? Looks like The Jacksons: An American Dream is getting pushed back until Christmas.

10:50 Awards are being given out, because it’s an awards show. Please don’t be a Young Money Christmas again. I can’t deal with that twice.

10:51 Bieber won and I can’t tell if he’s bringing up his mom or a Selena rebound.

10:53 Back to Beadle vs. Amish. The baby conversation is not finished. To reassure them that she’s not attempting to violate their privacy, Beadle says, “I think people respect motherhood; I really do,” causing Abe to defend his girl with an emphatic, slowed down “STOP TALKING. ABOUT. THE. BABY.”

Jeremiah: “We’re Amish, we stick together, and we get very defensive.”

In response to this, Beadle finally counters with “I did a lot of homework.” (Fair point.) “The bags under my eyes show how much homework I did.” (There are no bags, let’s be real.)

10:57 AHHHHHHHHHHHHHH HAMMER IS THE INTERNATIONAL SUPERSTAR.

Sorry, Breaking Amish, but I can’t go back to you. I’ll never know how the reunion wrapped up, but I’m fine with that. Just look at Hammer. He’s still perfect.