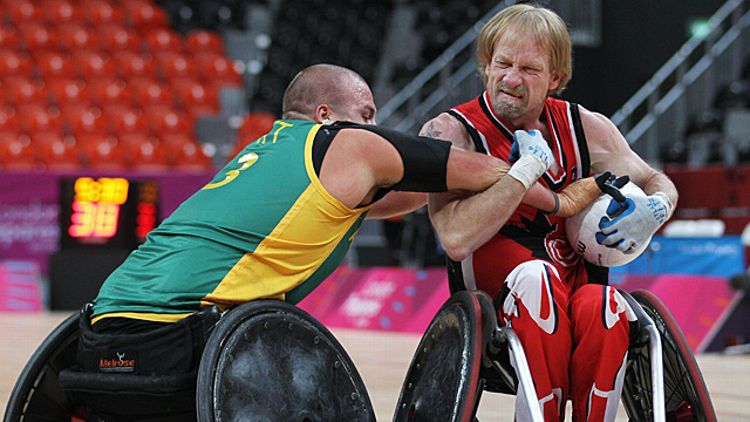 The Paralympics have begun, and that means that there will be several hundred hours of sports being streamed live on the official Paralympic website. The likelihood is that most of these events will be unfamiliar to you, and there’s no way that you can watch them all, so to help you prioritize your viewing we’ve narrowed the field down to the five sports you can’t afford to miss.

One of the surprise success stories of the able-bodied Olympics was handball, a sport that didn’t get much attention in the days before multi-channel streaming allowed us to pick and choose what we watched. It turns out that handball’s an awesome spectator sport, and the same is true of the Paralympic version, goalball, a three-a-side variant played by blind competitors. Each side alternates on offense and defense, with a striker hurling the ball as hard as possible at the opponent’s goal. It’s a simple sport, but when you see it being performed by players like China’s Chen Liangliang, you get a sense of the skill involved; his whirling-dervish approach to shooting made him a star of the 2008 Beijing games, where he fired the host nation to gold:

The USA doesn’t have a men’s goalball team, but in the women’s event they’re the reigning champions, having defeated China in the final in Beijing. The Chinese got their revenge in the World Championships in 2010; expect to see a thrilling rematch between the two nations in the gold medal match next Friday.

Most fencers will tell you that fencing, like handball, doesn’t get enough coverage, and would be more popular if it were on our screens more often. The problem there is that fencing is not like handball. It’s like ice hockey; a sport in which you need a flashing light to tell you when someone’s scored. This does not make for good television, and fencing lacks ice hockey’s main attraction; lots and lots of physical violence. As a result, able-bodied fencing is deathly dull to watch, but it turns out that when you strap fencers into chairs that are bolted to the floor a little less than a sword-length away from each other, the sport suddenly becomes exciting; a rapid-fire jab-fest stripped of all that tedious prancing that fencers indulge in when they can move freely. You still need a light to tell you when someone’s scored a hit, but when the fencers are constantly in such close proximity the action becomes fast and furious, and it’s a lot more exciting to watch as a result. See this gold medal matchup from 2008 for an example.

A variant of soccer in which all of the outfield players are blind, but the goalkeepers can see. If you think that’d make for a low-scoring contest, think again; the average score in international five-a-side competition is higher than sighted soccer, despite the matches being much shorter at just 25 minutes per half. This is partly because the pitches are smaller, but also partly because the participants are tremendously skillful. For proof of this, make sure you watch the reigning world and Paralympic champions, Brazil, whose lone striker, Jefferson Goncalves, is poised to be one of the biggest stars of the games; he’s the Lionel Messi of blind soccer, a one-man army whose ability to dribble past defenders he can’t even see is truly astonishing.

To get a sense of how tricky the sport is, here’s a blindfolded David Beckham trying his hand at the game:

The sport that brings a whole new meaning to the phrase pick and roll. It seems hard to believe that any points would be scored in the wheelchair variant of the sport, but international wheelchair games average around 110 points per match, and the ratio of field goals to free throws is only slightly higher than in the NBA, even though it’s remarkably easy to foul your opponent when your entire wheelchair is counted as an extension of your body. The speed and dexterity with which wheelchair basketball players get around the court has to be phenomenal in order for them to play at the highest level, and it’s an extraordinary sport to watch.

It’s also one of the most hotly contested events at these Paralympics, with several countries in contention for gold in both the men’s and women’s events. The Australian men are the reigning World and Olympic champions, but they face stiff competition from the USA, Canada, and Great Britain. Here’s the fourth quarter of the 2008 final,  between Australia and Canada

In the women’s tournament, it’s the USA who are the reigning Olympic and world champions, having beaten second-place Germany in both of those finals. Australia and Canada will also be in the hunt for medals, which will be decided next Friday and Saturday.

I will watch any sport you can name, with the exception of rugby. Thankfully, the wheelchair version of rugby is a very different sport. One key difference is the fact that it’s brilliantly entertaining, and the only explanation I can think of for the continued existence of ordinary rugby is that able-bodied rugby players are too scared to try the wheelchair version. To be fair, I wouldn’t play it either; anyone with even a modicum of sense would avoid a sport that’s known by the alternative name of murderball, and a nice, quiet game of able-bodied rugby looks like a very sensible (albeit staggeringly dull) lifestyle choice by comparison. Sadly, the Paralympic competition doesn’t get underway until next Wednesday, and we’ll have a more in-depth look at the sport nearer that time, but for now, take a look at Channel Four’s trailer for the event, which will give you some idea of what to expect.

“You know, I’ve broken my neck. What more can I do?” Not break it twice, maybe? That’s Kylie Grimes, by the way; one of two women who’ll be competing alongside the men in the murderball. Gender is not a factor that determines who gets to play in a wheelchair rugby match; the only qualifying criteria appear to be that you own a wheelchair, and have a reckless disregard for your own personal safety. It’s going to be one of the highlights of the summer, and you’d be mad to miss it. Or take part in it