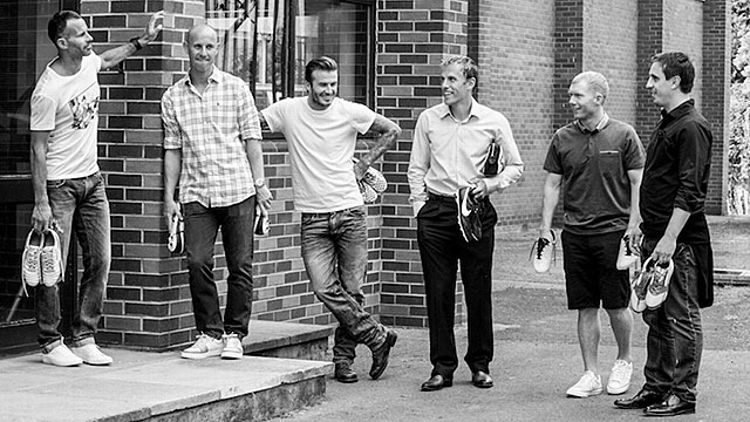 Ryan Giggs is gently juggling a football. He looks slight and pale, and is looking down intently at the ball through his floppy fringe. You’d think he was doing so shyly until you see how relaxed his shoulders are. Thousands of people are watching him and the cameras are rolling, but the 17-year-old Giggs ignores them, slow dancing with the ball.

Two decades later, the footage from that moment will crop up in a montage at the start of Class of 92, a documentary about Giggs and his peers — David Beckham, Paul Scholes, Nicky Butt, Gary and Phil Neville — from the famous Manchester United FA Youth Cup–winning team of 1992. The shot will be nestled among a flood of broadly contemporary images of Poll Tax riots, early Oasis gigs, royal divorces, Conservative prime ministers — and soundtracked by a song by James, the indie wing of the Acid House–infused music that swept Manchester (and, Mancunians will tell you, the world) at the start of the ’90s.

What makes the sequence remarkable is that Giggs is still somehow our contemporary, while the filmic moments surrounding his juggling act now seem unmistakably historical. Yes, Giggs has aged like everything else, and is an anomaly, playing top-flight soccer at the age of 40, but there’s still something remarkably dissonant about knowing he lives and plays “here” while watching him juggle that ball among the flickering images from “there.”

Of course, typical of footballers, he got here by stealth, almost incidentally, via an accidental history punctuated by occasionally passing “Go” to collect a champions medal (13 times, in Giggs’s case). That’s what’s most fascinating about watching the sequences of Class of 92 in which the six players are reunited at a Manchester dinner table to swap stories, or in the one-on-one recollections to camera — there are the expected broad strokes of reminiscence, but there are just as many moments where it becomes clear that the big-picture knowledge of making history is not something these athletes could allow themselves at any given moment in their careers.

It’s also a version of history that’s necessarily at odds with the myth-making that goes on around Sir Alex Ferguson, whose contributions to the film are sensibly kept to a supporting role. Strangely, the film reminds me of nothing so much as seeing Julian Temple’s The Filth and the Fury documentary about the Sex Pistols, and the way it allowed the band the right to speak their own history rather than inherit the Malcolm McLaren myth of them as puppets. According to the Ferguson legend we’re asked to believe, he had a dynastic plan all along. For the players, such plans may or may not include them at any given moment. That was their day-to-day reality during over a decade of dominance.

At one point, the six joke ruefully about the varying methods with which Ferguson used to tell them they’d been dropped, and while none was short of self-belief in doing what he did, there was little sense of collective destiny when they were just youngsters making their way. As Giggs describes, during the team’s terrible start to the double-winning 1996 season — the one that infamously prompted Alan Hansen to say “you can’t win anything with kids” — they didn’t have the frame of reference and experience to know “it was going to be all right.”

The film predictably climaxes with the 10 days in 1999 during which they won the league, FA Cup, and Champions League. But there’s something very fresh and present-tense about it all. Phil Neville, for example, recalls thinking “his Manchester United career [was] over” after he gave away a last-minute penalty during the famous 1999 FA Cup semifinal replay against Arsenal. Of course, that penalty would be saved by Peter Schmeichel, and later Giggs would win the game with one of the most celebrated individual goals ever seen.

Set against this are recollections from Trainspotting director Danny Boyle, Stone Roses bassist Mani, and, remarkably, Tony Blair that give some context to the time and culture that produced the players. These rather stilted moments actually inadvertently reinforce the sense of longevity of these players’ contributions. Blair, in particular, talks of being prime minister and seeing football become a central part of the country’s identity, and the sense of optimism that swept him and his party to power. It’s not so much the self-serving way in which he tries to ally the spirit of the achievements of the young United team with those of his own government that’s so jarring; it’s that the likes of he and Boyle are so comfortable with their role of brokering the meaning of the past. They’re operating from a clear consensus that it’s a past that is long gone while at least one of the players they’re describing within this reification of the past is still living the reality of being only as good as his last game.

I’m glad Class of 92 exists in the form it does and is being released at the time it is, though — it feels like witnessing the final moment before the time capsule gets closed. As the film unfolds, and the talking heads around the players pontificate on the meaning of British culture in the ’90s, the six players themselves mix talk of games for the ages with memories of nicknames, hazing, and constant irreverence toward each other — always with an absolute sense of loyalty and appreciation for what each man brought to the field, yet aware enough to know that a history without all the humor and moments they shared away from the cameras would only ever be a partial one.

I’m also glad that at least one of the players is still playing. Before long, even Ryan Giggs will retire and the inevitable process of sentimentality and partisan contrariness that governs all sporting discourse will further and further distort how he, Beckham, Scholes, Butt, and the Nevilles are remembered, and how they can possibly be retrieved for future generations. For the moment, as that footage of Giggs juggling amid the debris of the past reminds us, the Class of ’92 is still keeping the ball in the air.

About Last Night: Warriors Come Out to Play