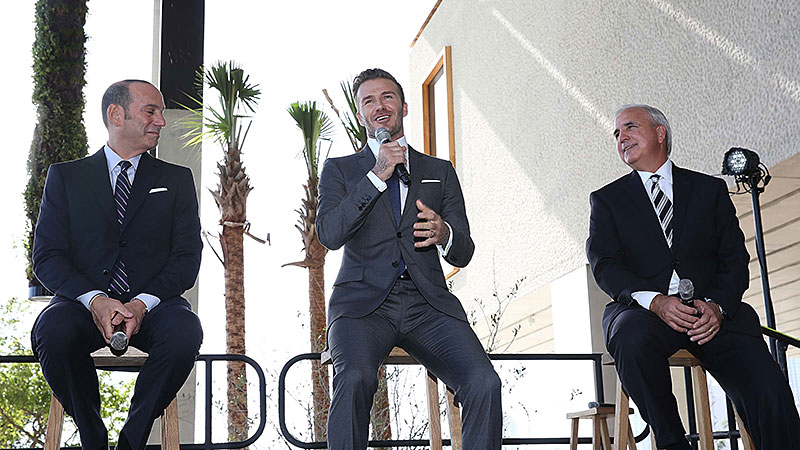 After months of rumors, I am delighted to confirm that at some unspecified time in the future, in a place to be determined, the Designated Player will be adding the tag “David Beckham” to his indexing system. Obviously.

He’s back. Officially. And so it begins.

Is there any other retired athlete on the planet whose movements could continue to generate such intense media interest, even at the moments where nothing is quite happening? Pele hawking foot-long sandwiches and impotence treatments doesn’t quite compare (at least till Subway and Viagra get some cross-branding, late-night synergy figured out).

Major League Soccer knows what it has in Beckham as media catnip. Given the chance for a personal appearance to announce what was already common knowledge, without adding any real detail beyond what’s already been discussed and endlessly revealed and tweaked for months, the league gleefully seized the opportunity to parade its prime hunk of clickbait. And it did so knowing we’d all bite and hate ourselves afterward, like Louis C.K. wrestling with the siren song of ice cream.

Basically, Wednesday’s announcement in Miami, to the effect that Beckham had decided to exercise his option on an MLS franchise, was official confirmation of what everybody knew. I’m not entirely sure whether I learned more from watching his press conference at the Pérez Art Museum than I did from watching Beckham parkour his way through his H&M Super Bowl ad in his boxers. Wednesday was all about his tailored suit and some perfectly nice but hardly revelatory statements about a commitment to a youth academy, and wanting to build a global team that was still “personal.” Sunday was about a reasonably priced line of sweatpants.

Of course, we shouldn’t really have expected anything else — that’s not really the point of an Official Beckham™ Appearance, where meaningful narrative runs a distant second to the image. An Official Beckham™ Appearance is almost like a Jeff Koons kitsch sculpture, in its attention to surface above all. In this case, it’s a surface that Bolivian telecommunications billionaire Marcelo Claure is willing to project many millions of dollars onto. (Mind you, Koons has had a fair amount speculated on him, as well.) Of course, that depends on reports about Beckham’s backers being accurate. Other than some allusions to “finding the right partners,” there weren’t many more details on that score. We wouldn’t want to complicate the streaming of Beckham’s image at the presser.

Celebrities have their best angles, and the best ones know them well. My wife once interviewed Liza Minnelli, who came into the room and instantly moved the camera and the key lights to accentuate her best side — and did so brilliantly — while telling everyone she’d done a lighting course after the disaster that was how she looked in Arthur 2.

Beckham, too, knows his best angle. It’s basically the same one painters use when depicting Jesus in “suffer the little children to come unto me” mode. That head-on, beatific, crinkle-eyed, closed-lip smile thing where he invites the viewer to look and meets their gaze, knowing in all humility he is a special one.

If I’m concentrating too much on this image thing, I apologize. To get more substantive about yesterday’s events, David Beckham has basically confirmed he is exercising the right in his original MLS contract to buy a discounted MLS franchise, and he is focusing his efforts on Miami. He and his partners have looked at some 30 sites for a potential stadium, narrowed it down to five, and are committed to building in downtown Miami, where they will use private rather than public money — though the city may be asked to donate land at PortMiami, if Beckham gets his preferred site. There is no timeline on when the team would enter the league, or where they’ll play, short term or long term, or indeed what they’ll be called.

I’m pretty sure these facts were all publicly known on Tuesday, and other than confirmation that “he” has walked among us again, I’m pretty sure we didn’t learn much more from his official announcement on Wednesday.

And if that sounds too snarky, that’s OK, because Beckham tends to use his unofficial appearances to communicate most important stuff anyway. From the hair-band experiment he just so happened to conduct a couple of days after Sir Alex Ferguson kicked a boot at his head, to the various artfully contrived and meticulously documented “just going about his business” appearances in and around Miami, looking at potential stadium sites, or cropping up on Claure’s Twitter feed — Beckham knows exactly how to create a throwaway moment so that it lands right where he wants it. I daresay we’ll learn as much about Beckham’s progress toward a Miami franchise through a time-lapse collage of similar fragments over the coming year, as we will through official events such as Wednesday’s “announcement.”

And just to be clear: Ultimately, I’m blaming myself. Beckham does what he does, and I and many others repeatedly consent to be part of the clamor that greets it (often at the prompting of editors, but we’re clearly more volunteer than victim). I can’t honestly tell you there’s nothing to see here, folks, because, “LOOK, THERE’S DAVID BECKHAM!” — but on this occasion at least, there’s maybe nothing new to learn, because frankly, if you’re reading this, you’ve been watching for months/years already.