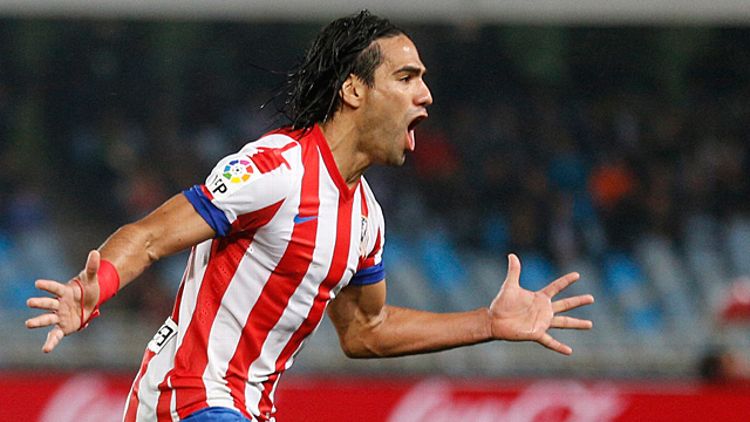 January is nearly upon us! Or at least it feels that way if you spend any time reading the words of the soothsayers who try to predict what will happen when European football’s transfer window reopens on January 1, 2013. Speculation is particularly rife in England, and it mainly centers on two clubs: Chelsea and Liverpool. Both teams find themselves low on firepower, and as a result, they’ve been linked with every available forward in European club football. Two players in particular have been singled out as possible signings in the new year: Athletico Madrid’s Radamel Falcao, and Schalke’s Klaas-Jan Huntelaar.

Huntelaar, who is supposedly packing his bags in preparation for a move to Liverpool, has scored 32 goals in 42 league games for Schalke FC since the start of last season. Falcao, who is rumored to soon join Juan Mata and Eden Hazard at Chelsea, scored 34 goals in 43 league games for Athletico Madrid over the same period. And yet these two players, with almost identical league goal-scoring records, are valued rather differently. Chelsea will be required to trigger Falcao’s minimum-fee release clause — which stands at a cool $70 million — to get their man, whereas Liverpool can expect to pay no more than $10 million to sign Huntelaar, who is available at a knock-down price thanks to the imminent expiry of his contract with Schalke.

However, it could equally be argued that Falcao is in fact something of a bargain at $70 million. Athletico Madrid originally had to pay Porto $62 million (including performance bonuses) for his services, and since then the Colombian has run riot through what is arguably the world’s most competitive (and easily most technically proficient) league, and also fired Athletico to success in the Europa League, scoring 15 goals in 17 matches — although he hit 18 goals in 16 games while guiding Porto to victory in the same competition the year before, so maybe he’s on the wane?

No doubt that’s what Athletico will be telling themselves when he inevitably moves, netting them a mere $8 million profit on Europe’s hottest striker. It’s particularly baffling as Spanish clubs tend to use minimum-fee release clauses as a means of deterring interest in their players, and they are typically set at stratospherically high levels; for instance, to trigger Lionel Messi’s release clause, potential suitors will need to find $320 million. For Cristiano Ronaldo, the asking price is widely rumored as $1.28 billion. When viewed in those terms, $70 million for Falcao seems like an absolute bargain.

So does Radamel Falcao represent good value for money, or is he merely the next Fernando Torres? To answer this question, I’ve totaled up the numbers for Europe’s most prolific goal scorers, plus stats for Liverpool’s and Chelsea’s existing strikers (Suarez, Torres, and Sturridge), and each has been assigned a likely transfer value, based on age, contract length, and Transfer Markt‘s valuation. Apologies to Antonio Di Natale and Diego Milito, who have been ignored on account of their being really, really old.

It’s an interesting mix, comprising pure strikers, false nines, wingers, and Fernando Torres, who is the worst player on the list in several different quantifiable ways. However, determining who the best players are is a trickier business. We can sort the data by the number of shots taken per goal scored, in which case the dead-eyed accuracy of Gonzalo Higuain, Mario Gomez, Rodrigo Palacio, and Lisandro Lopez leaps to the fore. However, Palacio and Lopez take fewer shots per game than any of the other 31 players on the list; clearly, dead-eyed accuracy is of debatable value when you get only two shots at goal per match.

If we instead sort the data by the number of shots taken, our old friends Ronaldo (7 shots/90) and Messi (5.03 shots/90) become the MVPs. Ronaldo’s aim, it should be noted, may seem somewhat unreliable (ranking 20th in shots/goal), but he’s shooting from an average distance of 20.7 yards, which is perhaps unsurprising given that he’s technically a winger, not a striker. By comparison, Messi shoots from much closer to goal (16.2 yards on average), but he’s ruthlessly accurate, and ranks fifth on our list in shots/goal. You could argue that Ronaldo shouldn’t be on this list at all, and only figures thanks to his habit of bludgeoning the ball into the top corner from outside the area, but you can’t argue with his success rate — he scores more goals per minute than anyone else in Europe. Messi, meanwhile, has the dribbling ability to bring the ball into the box and shoot from much closer distances, hence his vastly superior accuracy statistics.

Messi’s devastating combination of shot creation and efficiency is the holy grail for strikers, so who else on the list excels in both these areas? The table has been sorted according to who has the best blend of the two attributes, hence the high ranking for players who rate in the top 15 in both categories: Robin Van Persie, Radamel Falcao, Zlatan Ibrahimovic, Karim Benzema, and Edinson Cavani. Ibrahimovic is getting old (PSG have now dropped him into midfield to act as a playmaker), and the other four would all cost in excess of $50 million, as would Mario Gomez and Gonzalo Higuain. It’s hard to make a case for any of these strikers over any other; Van Persie and Falcao have the best mix of attributes, while Gomez and Higuain boast the best goals/game ratio. It should also be noted that Cavani and Falcao have achieved their successes at (slightly) smaller clubs, which weighs in their favor. What’s clear is that any of these players would represent an improvement on Chelsea’s current forward line, and if Falcao was worth $62 million to Athletico Madrid, he’s certainly worth $70 million to Roman Abramovic. What’s more, Athletico Madrid may be willing to take Torres — who started his career with the club — as a makeweight in the deal, and there aren’t many other clubs lining up to take Torres off Chelsea’s hands.

But what of those clubs who can’t afford to gamble $50 million (or more) on a striker? Is Huntelaar the best value on the list? Evidently, Fulham bagged themselves the deal of the century when they signed Dimitar Berbatov, but it’s unlikely he’ll want to move again this season, so Liverpool might be well advised to keep in contact with Athletic Bilbao, who look likely to lose the services of Fernando Llorente this January. Like Huntelaar, Llorente’s contract is due to expire at the end of the season, and he could also be available for $10 million — or, to put it another way, less than a fifth of an Andy Carroll.