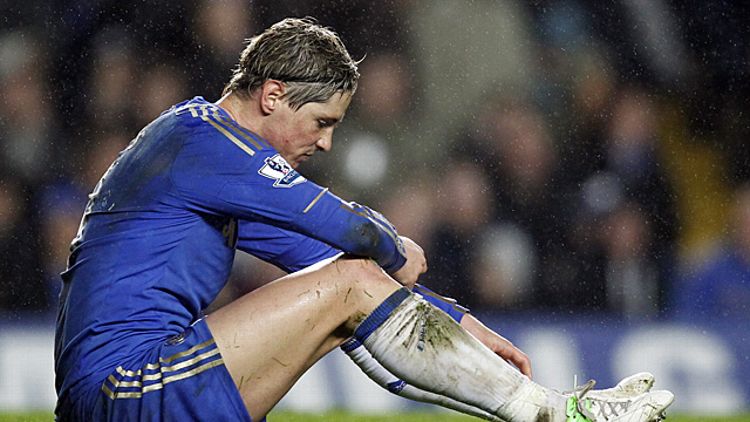 Last Wednesday, Chelsea owner Roman Abramovich sacked his manager, Roberto Di Matteo, in what many are now calling the Night of the Long, Increasingly Blunt Knives, Caked in the Congealed Gore of Numerous Highly Successful Chelsea Managers. Di Matteo was the 12th man to manage Chelsea in the last 14 years, and the ninth to have been fired in that period, which is somewhat surprising given that it’s been — by some distance — the most successful period in the club’s history. Consequently, supporting Chelsea (which is a congenital condition in my case, thanks to my family’s defective sporting genetics) is a frequently upsetting experience, best described by this scene from Goodfellas.

I get to go through this, on average, about once every 18 months. The good news is that I’m getting used to it, and nowadays rarely feel compelled to destroy a phone booth.

It’s worth noting that there’s a pattern emerging in Abramovich’s personnel decisions, and it’s becoming increasingly easy to predict what he will do next; there’s a method to King Roman’s madness. This is both good and bad news for Di Matteo’s successor, Rafael Benitez, who — if he’s been paying attention — will have a very clear understanding of what he needs to do to survive at Chelsea. That’s the good news. The bad news is that his task is almost impossible, and has very little to do with mundane day-to-day chores, such as playing good football or winning trophies. In fact, it was the appointment of Benitez that finally confirmed my suspicions regarding Abramovich’s motives. Consider the following table:

That’s career of Fernando Torres. It’s often said that ’Nando’s career took a dive when he joined Chelsea, but the truth is that the descent began a little earlier than that. In fact, the day El Niño became El Ohño was June 3, 2010, the day Liverpool sacked Rafael Benitez. This becomes clear if you divide Torres’s career into three eras — Before Benitez, when he averaged 2.67 games per goal scored; Under Benitez, when he managed a ratio of 1.625 games per goal; and Post-Benitez, when he hit the net once every 4.03 games. The Curse of Torres has accounted for four managers: not just Ancelotti, Villas-Boas, and Di Matteo, the three Chelsea men who failed to make Torres look worth the $80 million Abramovich paid for him, but also Roy Hodgson, who lasted 202 days in charge of Torres at Liverpool before falling victim to The Curse. Under the circumstances, who else can Abramovich ask to successfully manage the Post-Benitez Torres other than Benitez himself, the only man to ever make him look worth his price tag? Welcome to the new era: Post-Post-Benitez!

The alternative, of course, is for Chelsea to get rid of Torres, which may seem like a sensible option if you assume that Abramovich’s objective is for Chelsea to score goals and win things, but it’s now pretty clear that this is not the case, and as Jose Mourinho can attest, it has not been the case for many years. Mourinho won back-to-back titles at Chelsea, but he did it by making Abramovich’s massive investment look incidental to the club’s success, and as a consequence, he was fired.

Mourinho was making basic errors — errors that won league titles — from day one. Upon first joining Chelsea, he demanded that a huge array of expensively assembled talent be cleared out of the club; marquee Abramovich signings such as Hernan Crespo, Juan Veron, and Adrian Mutu were released or loaned out, while Mourinho used Abramovich’s checkbook to buy unglamorous players for huge sums, including £33 million spent on defenders from Porto. All told, Mourinho spent over £90 million that season, but the squad that he built, the one that resoundingly won the league, cost a mere £6.35 million more than the one Claudio Ranieri had finished a distant second with the season before. The message was clear: money could buy you stars, but only Mourinho could win you the title. Abramovich found himself bankrolling a hugely expensive team, but not getting anything like the credit he craved for his input. He responded by breaking the British transfer record with a £31 million swoop for Andriy Shevchenko, against Mourinho’s wishes, and with predictable consequences. In Mourinho’s third season in charge, Shevchenko managed four goals in 32 league appearances, and although Chelsea only lost three games that season, the lack of firepower at the other end led to 11 draws, and ultimately a second place finish. An unhappy Mourinho became increasingly rebellious, and was sacked at the start of the following season.

Pundits were baffled that Abramovich could sack such a successful manager, and for many years after, the received wisdom was that Mourinho was sacked for two reasons: first, that his team was too defensive for Abramovich (who allegedly craved exciting, attacking football), and second, Mourinho failed to win the Champions League. Today, those ideas seem laughable. If Abramovich craved attacking football, what provoked him to sack Carlo Ancelotti? His 2009-10 Chelsea side scored a record-breaking 103 goals en route to winning the Premier League, and yet this didn’t seem to satisfy Abramovich. The following January, Ancelotti found himself being asked to manage Fernando Torres, and 111 days, 18 Torres appearances, and one Torres goal later, Ancelotti was fired. Similarly, after Abramovich’s supposed desire to see Chelsea win the Champions League was fulfilled, Roberto Di Matteo got just eight more months on the job before being sacked immediately after dropping Fernando Torres for the first time.

It’s hard to avoid the conclusion that Mourinho, Ancelotti, and Di Matteo were all fired for failing to make Abramovich look like a shrewd transfer market operator, which is the challenge now facing Rafael Benitez. But one wonders whether Benitez himself fully understands what’s being asked of him. His appointment at Chelsea has been highly controversial with the home support (who hate him for saying mean things about them in the past), and his debut as Chelsea manager was marred by a constant stream of abuse aimed toward him from the stands. Admittedly, this distracted from the appalling football on offer — there were only 15 shots taken in the entire match, the lowest total for any Premiership game this season — but it also seems to have distracted Benitez from his objective. He’s vowed to win over the Chelsea fans with success, but that’s not what will keep him on the job; to remain as Chelsea manager, he needs to win over Roman Abramovich by making Fernando Torres look like a good investment, and that will prove a much tougher challenge.

The Struggles of the Milwaukee Bucks' Undersized Backcourt